Westworld revolves around a dusty old town that’s populated by gunslingers, sheriffs and shady saloons.  However, this isn’t any ordinary western– and none of the characters in the show are what they appear to be. In this article, we’ll show you how to watch Westworld without a cable subscription. Get ready for season 3 which debuted on March 15, 2020.

Michael Crichton’s Westworld is not an actual town, it’s a theme park– kind of like a “Jurassic Park” version of the wild, wild west.  Anyone that can afford to do so can visit the park and live out their gunslinger fantasies.  And all the “people” that inhabit Westworld and interact with its customers are actually extremely lifelike robotic androids.

Westworld‘s stunning special effects and unexpected plot twists have helped it become one of HBO’s most popular shows.  12 million viewers tuned in to watch the first season of Westworld, which amounted to a better “rookie year” performance than both The Sopranos and Game of Thrones.

Rolling Stone‘s David Fear had this to say about Westworld‘s unexpected record-breaking success:

“HBO’s hit show was compelling, confusing, thrilling, maddening – and most of all, it was virtually impossible not to keep watching.” David Fear, Rolling Stone

Westworld makes for great TV because it works on many different levels.  There is plenty of action, the acting is superb and the effects look incredible– but there are also plenty of philosophical nooks and crannies to explore as well.

Even though Westworld is an HBO production, you don’t need a pricey cable subscription to tune in.  Here are all the best ways to watch Westworld online, without cable.

The very best VPN for geo-hopping

Geo-hopping is completely legal, but websites like Netflix and HBOGo don’t like to get visitors that use VPNs to access content that they are not supposed to see.  Netflix has gone as far as to block all VPN users.  But  StrongVPN has developed a workaround for VPN blocks: obfuscation mode.

Obfuscation mode makes it look like you’re not using a VPN, even though you actually are.  If websites can’t detect that you’re using a VPN, there’s no way that they can block you.

After you log in to the member’s section of the StrongVPN site, you’ll reach a screen that looks like the one depicted below.  Click the section labeled “StrongVPN Client” to jump to the software download page.

The first time you open StrongVPN, you’ll need to type in (or copy-and-paste in) your login information and password.

Tip: If you opt to allow StrongVPN to save your credentials, the next time you open StrongVPN you’ll be able to login with a single mouse click.

Step #4: Select any United States server from the server list

Once you’ve connected to a StrongVPN server, you should see an American flag appear in the left corner of the screen.  You should also see the VPN STATUS: CONNECTED message to the right of the flag.

As mentioned above, StrongVPN‘s obfuscation mode makes it very difficult for a website to detect that you’re using a VPN to geo-hop.  With obfuscation mode on, you’ll seem like just another normal American website visitor when you land on the HBONow site.

Navigate to the “Advanced” and click the menu entitled “Scramble.”  Then, choose the “Obfuscate” option from the list.

Step #6: Sign up for a free trial of HBONow

Now that you’re logged into an American StrongVPN server, you have an American IP address.  This will allow you access to all internet content only Americans are ordinarily able to get to, including the HBONow free trial signup page.

Bonus tip: Use StrongVPN to login to the American version of Netflix

Did you know that Netflix subscribers living outside the USA only have access to a small portion of the full Netflix catalog?  Complicated licensing restrictions have forced Netflix to block many of its international users from accessing many of its movies and shows.  If you already have a Netflix account, just login to StrongVPN following the steps listed above and then open up Netflix.  You’ll notice that you’ll be able to access a lot more content than you ordinarily would be able to view without StrongVPN.  Additionally, you can also use StrongVPN to access Hulu from outside the US borders.

The best way to watch Westworld for free

The very best way to watch Westworld is to go straight to the source and get a 30 day free trial of HBONow. 30 days is more than enough time to burn through the entire first season, and you can quit after that and pay absolutely nothing.  But if you do opt to stay on, you can watch Westworld season 2 live when the show returns in 2018.  Additionally, other great shows like Game of Thrones, The Leftovers and Curb Your Enthusiasm are also available via HBONow.

If you think Westworld looks interesting but you’re still not sure if you really want to watch the whole season, you can check out the first episode for free on the HBO.com website– and you don’t even have to create an account.  Just punch in your birthday and email, and enjoy. 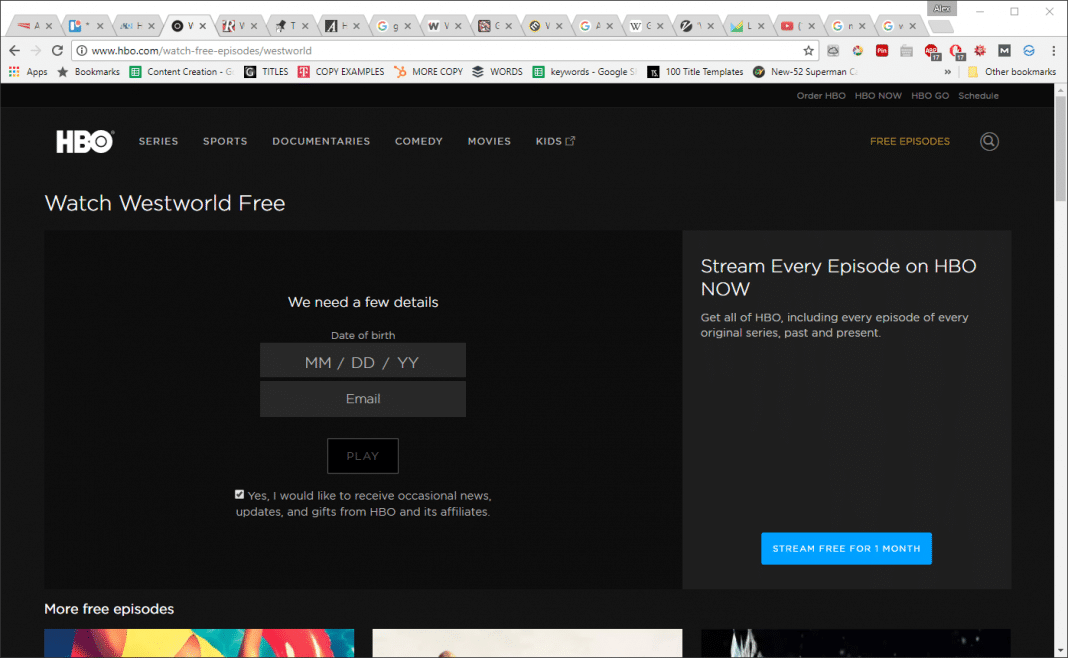 Watch for free online if you already have cable

How to get HBOGo from outside the USA

As mentioned above, licensing restrictions will cause you to run into this message if you happen to live outside the United States:

Fortunately, there’s an easy workaround available.  Anyone that has a “geo-hop” friendly VPN can access HBOGo from outside the US.

A VPN is similar to a pair of mirrored sunglasses.  A Virtual Private Network allows you to look around at whatever you want on the web anonymously.  Ordinarily, server logs record your every action on the web.  But there’s no way anyone can pinpoint your location or track your history if you connect to the web via a VPN.

In recent years, more and more sites have resorted to “geo-blocking” in order to keep residents of particular countries from accessing content.  The key to overcoming a geo-block is concealing your location information with the aid of a VPN.

The best way to support a show that you really like is to download it legally.  There are many ways to get legal copies of Westworld shows, but here are the 2 options that we believe are the best.

Vudu is super convenient because content that you purchase via Vudu can easily be accessed on almost any device.  Currently, Vudu supports smart TVs, game consoles, several different media streaming boxes (Android TV, TiVo Roamio, Roku), as well as Android and iOS mobile devices and tablets.  Free content is also available on the Vudu site, and some titles can be rented for a discounted price.

Unfortunately, you can’t rent Westworld yet on Vudu.  Additionally, only the first episode of season 1 is free.  However, you can buy the first season for $38.99.

iTunes does not give you a free episode of Westworld to sample.  However, it does give you a better price for purchasing individual episodes compared to Vudu.  You have to fork over $4.99 to get an HD episode of Westworld if you purchase via Vudu, but you only have to pay $3.99 to get it via iTunes.  One dollar may not seem like a lot, but the difference adds up if you end up buying several episodes.

The faces of Westworld

One of the most interesting characters on the show is a robot called Dolores Abernathy (Evan Rachel Wood). Delores is the oldest robot in the park, and she is programmed to simulate the personality of a simple farm girl. But as season 1 unfolds, Delores slowly begins to awaken to the fact that her whole life is a carefully constructed lie.

Like Dolores, brothel courtesan Maeve Millay (Thandie Newton) also begins to develop a mind of her own.  Flashbacks to earlier memories that were supposed to have been wiped clean cause the robots to question the reality around them. 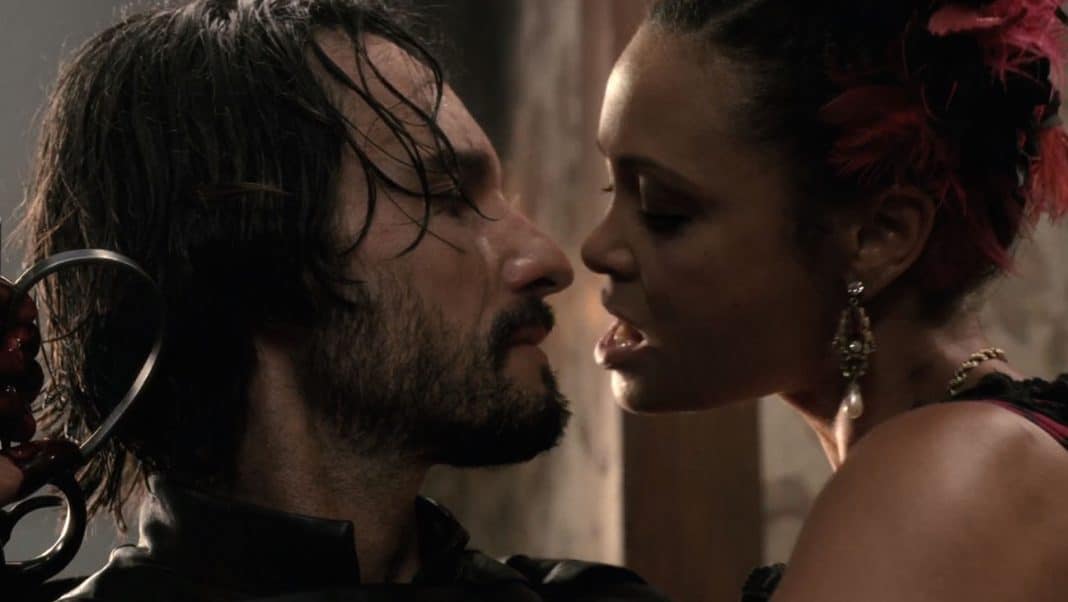 In addition to the robots, there are also interesting human characters to get to know as well.  Anthony Hopkins plays the brilliant but eccentric creator of Westworld, Robert Ford. Dr. Ford has a complicated relationship with his creations.  He and his partner Arnold Weber lived in the park for 3 years during the “beta testing” portion of the Westworld park rollout. 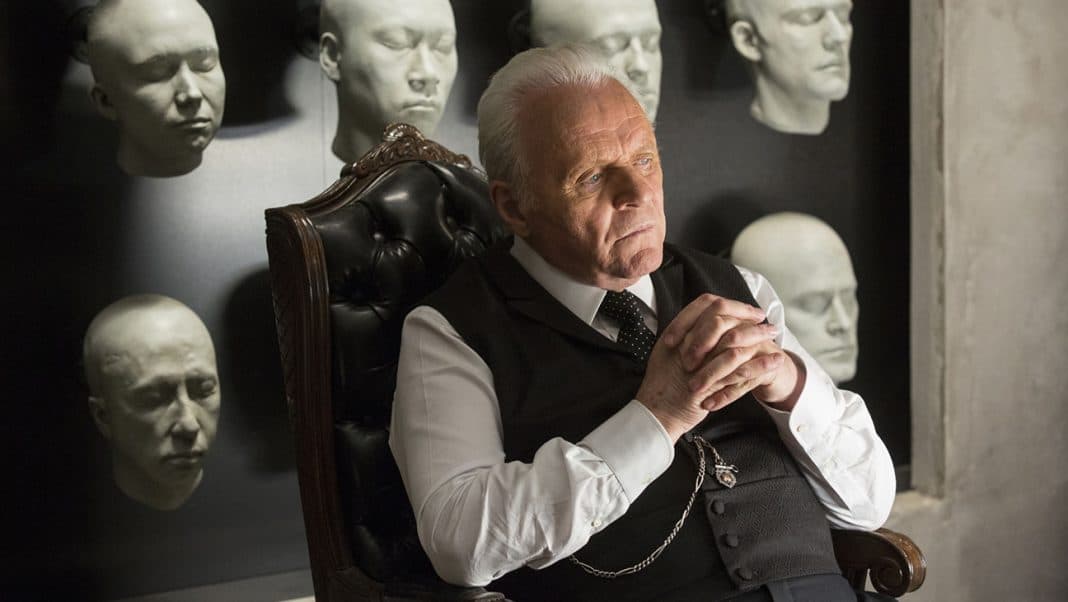 In addition to racking up huge numbers, Westworld has also received a handful of awards and nominations.  In all, the show has been nominated for 22 Emmys, 3 Golden Globe Awards, 2 Writers Guild of America Awards, 2 Satellite Awards and 4 Critics’ Choice Television Awards.

Instead of a straightforward title sequence, the makers of Westworld decided to go with a hypnotic, off-kilter opener that reveals how the robots were made in the factory.

“The footage already existed of them filming with this milky, glue-like, white substance, and it struck me as a fantastic juxtaposition to the dirty, dusty Wild West.” – Westworld intro designer Patrick Clair

If you like twisty TV shows with lots of surprising plot turns, check out the three shows listed below.  They are all very different, but they have one thing in common: the world has been flipped upside down and the main characters have no idea what’s going on.

What would life be like if 2 percent of the world vanished without a trace?  The Leftovers explores all the various ways in which the human mind attempts to answer unanswerable questions– and every subplot of the story comes to a satisfying end in the final episode.

You can watch the entire show from start to finish on HBOGo, which is another good reason to sign up for a 30 day free trial.  There’s also a free episode available on HBO’s main site. 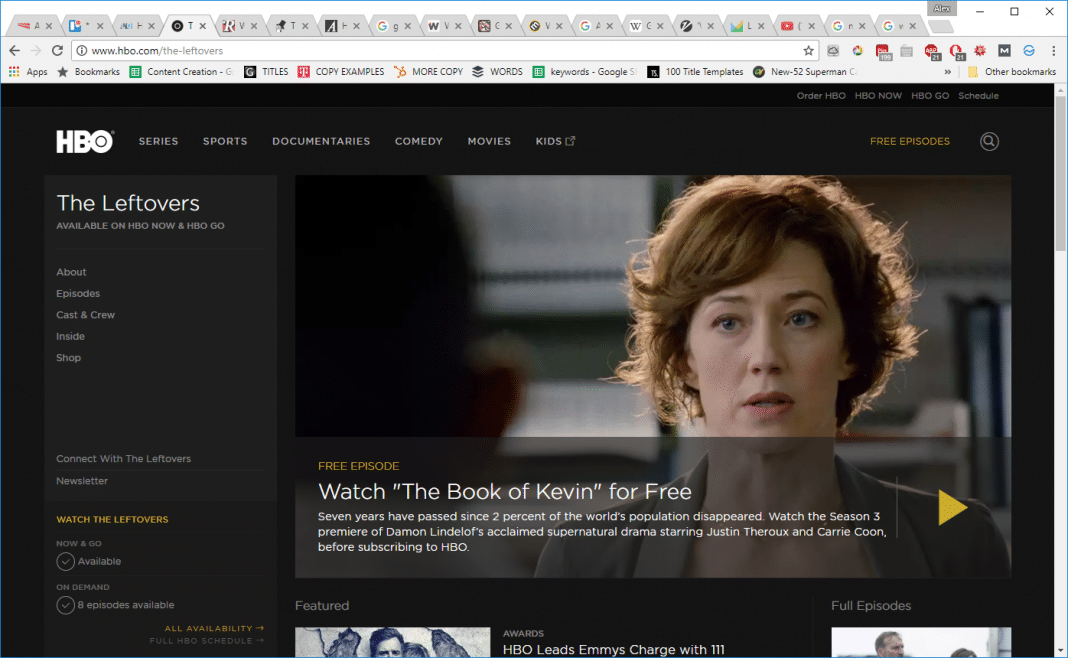 American Gods is about an ex-convict who does his time, keeps his head down, gets out of prison for good behavior– and then meets the Norse god Odin on an airplane.  And things only get weirder from there.

Mr. Robot is about a computer prodigy named Elliot Alderson.  By day, he works as a security engineer at a computer security company called Allsafe.  By night, he uses his skills to disrupt unethical companies and bring pedophiles and other unsavory characters to justice.  Eventually, Elliot’s mental health issues and drug addiction cause his mind to unravel– and that’s when the story really gets interesting. 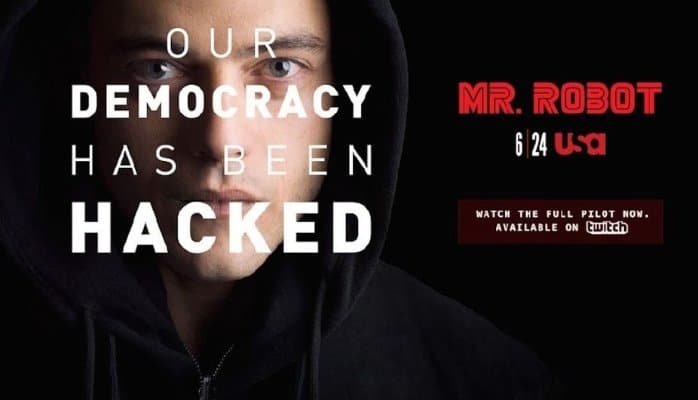