There are a large number of ways your information can get stolen online these days. This has only increased as public wifi has become more popular. Sitting in a coffee shop and browsing the internet on their free wifi might save you money, but it also exposes you to anyone else on that network. With free software, pretty much anyone can track your movements as long as they can get a hold of your IP address. This is where VPN services like ExpressVPN come in handy.

Why Use a VPN?

VPNs work by routing your connection through private servers that assign you a new IP address in a different location. That way, anyone who finds your IP address will not be able to connect that IP address to you. VPNs provide full anonymity to those searching the web. There are plenty of free VPNs as well, but most of these lack the resources to provide real benefits and often have very limited security, which is the whole purpose of a VPN in the first place.

Whether you’re trying to mask your identity, keep your viewing habits private or get around geographic content blocking, VPNs are quickly becoming a necessity for internet users.

Below, we provide a thorough review of ExpressVPN. This popular, paid VPN service has a lot to offer. However, we’ve put it through the wringer, offering a fair, multipoint review that should help you determine if this service is right for you.

The VPN can be installed on the following operating systems:

You’ll find that ExpressVPN provides some extra information regarding how to install their VPN on Linux, as the process is not as simple as downloading an application.

ExpressVPN does not allow you to install any of their applications unless you sign up for an account first. However, the program is fairly inexpensive and can be purchased on a month-to-month, 3-month or annual subscription. We recommend reading our ExpressVPN review below for more details on what this VPN service has to offer. 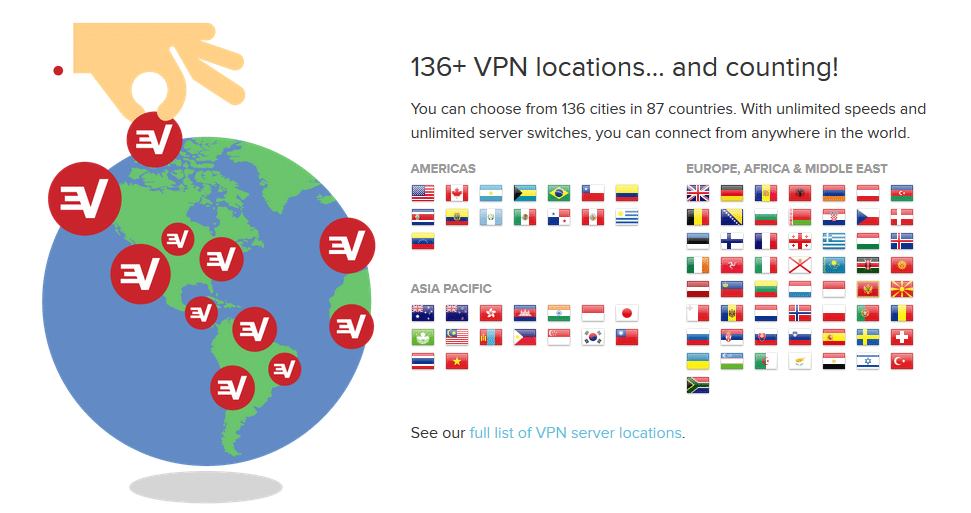 ExpressVPN is among the most popular Virtual Private Networks around. We’ve looked into this VPN on a separate occasion, finding that it is among a select few VPNs that still provide access to American Netflix. In our examination of ExpressVPN for its other features, we’ve found a mixed bag of some very excellent features and some areas that could use improvement. Notable is the fact that ExpressVPN is one of the most expensive services we’ve reviewed, but also one that provides access to a large number of geographic locations. Overall, we’ve found that ExpressVPN provides a good service, with clearly identifiable limitations, while also being noticeably more expensive than competitors with similar features.

As noted above, ExpressVPN is far more expensive than most of its competitors that offer similar services. As with most VPN services, ExpressVPN gives discounts for those who purchase more than a one-month plan. Anyone using ExpressVPN beyond 4 months should purchase the 6-month plan at a minimum. If you like the service after the first month and can see yourself using it for a full year, it’s a good idea to go in for the 12-month plan. This offers the most savings by far for the whole year. This service additionally allows a large number of payment options. This includes all major, and some minor credit cards, PayPal, Bitcoin and 11 alternative online payment methods via Paymentwall. 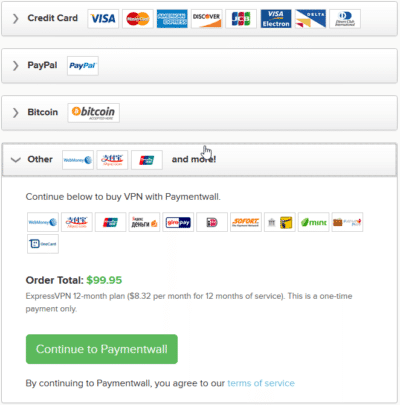 The real question with ExpressVPN is whether or not the higher price point is worth it. For internet users, this question is extremely important. There are several paid services, such as SportsAccess, that provide good service at a cost. And those internet users looking to save money while still using a VPN may question putting down so much when using it for the primary purpose of accessing mostly free content.

Whether you see this service as valuable or not depends on what you’re looking for in a VPN. ExpressVPN has far more servers in far more countries than we’ve seen from other VPN services. The service does, however, have fewer servers altogether than many of its direct competitors. The value for internet users here may exist from those living in countries that often do not have VPN servers locations in or near them, but can find these through ExpressVPN. Proximity to servers can, after all, have an impact on ping, latency, and speed.

ExpressVPN provides a wider range of device compatibility than many competiting services. The following devices and operating systems have functional ExpressVPN apps:

ExpressVPN has a large number of features, many of which are extremely valuable for internet users. The vast majority of these features are security-related, which we will get into later. Outside of security features, the following list of features should provide some benefit while streaming through different websites:

We gave extra attention to speed in our review of ExpressVPN. While speed (or, more accurately, bandwidth) is important when using most websites, there are some in particular that require much higher bandwidth than others. HD streams and movies, such as those accessible through Netflix and YouTube, all require more speed than normal. A typical SD movie can be streamed without loading or interruption with as little as 1.5 Mbps, while an HD video can easily require 5 Mbps, although often more if one is hoping to stream without annoying buffering.

ExpressVPN has a speed tester on its website. However, we sourced our speed tests through Speedtest.net. Our tests were conducted with a control test based in Washington D.C. The control test was conducted without a VPN to give us a better idea of how much speed loss and ping increase we’d experience through various servers and server locations. For this test, we also chose the countries with the most server locations.

It’s important to remember that there are a large number of factors that can affect bandwidth through VPN servers. Results may vary, but these tests should give a good picture about whether ExpressVPN delivers on its promises of unlimited bandwidth and high-quality servers. 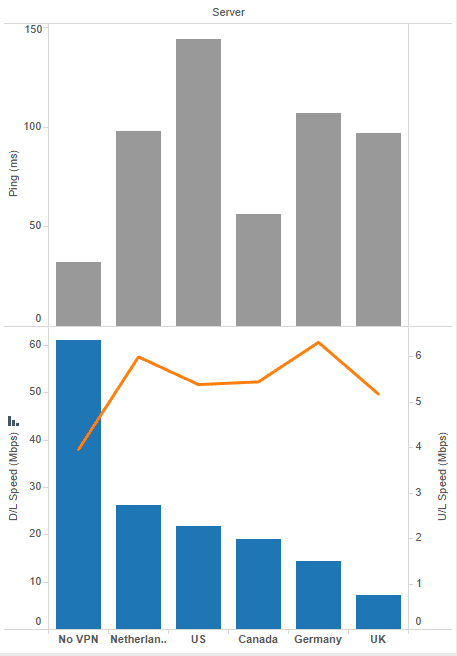 Our ExpressVPN speed tests revealed some positive, negative and odd results. First, we struggled to actually connect to a working U.S. server. All attempts to connect to an East Coast U.S. server failed. Each time we did so, we instead landed on servers in Singapore. This was verified by information from Speedtest.net. We eventually hit a U.S. server, but only after trying to connect to a West Coast server. Each time, however, the ExpressVPN application told us we were connected to the U.S. servers, which was not true.

Servers in the other countries, however, all connected appropriately. We found a few interesting results here. First, internet users who use P2P clients such as uTorrent will be happy to know that ExpressVPN’s servers had some of the best upload times we have seen, and much less speed loss than we have seen. This is especially true from the UK servers. Although the download speed decrease from 60.93 Mbps to 7.23 Mbps is extremely large, other services we’ve tested have resulted in far lower results from UK servers. The results here indicate their UK servers have enough bandwidth for HD streaming and decent P2P streaming.

Oddly, the ping seemed to be mostly unaffected by the distance. This is a good thing for internet users hoping to stream through a VPN. Most services we’ve tested have had understandable increases in ping the further away from the servers from our location. However, ExpressVPN’s servers experienced little increase in ping for us.

ExpressVPN does not slack on its security features. Indeed, this service takes security very seriously, even locating its headquarters in the British Virgin Islands, where it’s protected from most security-related laws common in the U.S. and Europe. The more sought-after security features for internet users include: 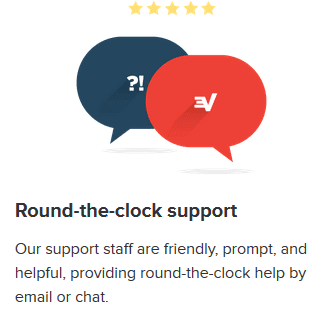 ExpressVPN maintains several ways to find support for the service. The FAQ page provides some benefit for those with rather simple to solve problems. ExpressVPN also provides setup tutorials for every operating system and troubleshooting guides for slightly more complex problems. Should you be completely in the dark about how to solve a problem, you can send them an email, or attempt to use their live chat system on the website. ExpressVPN claims that they have 24/7 support; however, their chat system was offline when we went in to test it out: 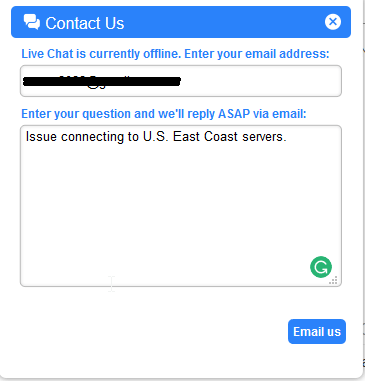 We sent them an email regarding our issues connecting to U.S. servers and will update with their response when this comes in, as well as how long it took to get a response.

ExpressVPN sign-up is easy. The only thing that is different with this service is the requirement of an activation code. This is a security measure, however, it does add an extra step to the process. You will need an email address for sign-up purposes, but this will primarily serve as your primary log-in. Once you’re registered, accessing the VPN is fairly quick and easy.

Switching over to using ExpressVPN on an Android-based mobile device worked quickly and easily. There, we were able to conduct all of our speed tests. It was here that we identified some additional problems that would be particularly concerning to internet users looking to connect to U.S. servers. When we connected to a New York server through the VPN but ran a speed test through Speedtest.net, we got a result that showed we were connected to a server location in Singapore, not the U.S. We tried this again through the Washington D.C. server and got the same result. The noticeably increased ping (233, up from 32 with a VPN) and significantly decreased download speed (11.83 Mbps, down 60.23 Mbps) would seem to confirm this.

When we attempted to connect to a U.S. West Coast server, we did finally land onto a U.S. server — but in Baltimore on the East Coast. Interestingly, we only experienced this problem when trying to connect to U.S. servers. Nevertheless, internet users who are hoping to gain access to U.S. content due to geographic content blocking, or for whom local ISPs or governments block content, may not be happy having to play roulette with the application in an attempt to find a U.S. server.

The service additionally does not have any indication of when servers are down. Nevertheless, servers we did connect to were fast, with the UK server surprising us with its download and upload speeds. Given the low speeds we’ve found when testing servers in this country through other VPN services, this was a plus.

Based on the level of service, however, ExpressVPN’s price is a bit questionable. Yes, there are servers in more countries than most of the competition and yes, ExpressVPN has a large number of servers. However, we struggled a bit much just connecting through the Windows 10 application. And ExpressVPN failed to connect to the correct U.S. servers, and at times connected us to non-U.S. servers while still claiming on the application that we were connected to the correct server. Furthermore, ExpressVPN has a far fewer number of servers than most of their competitors. ExpressVPN offers a good service, with excellent speeds, but it is one service that may be more worthwhile if the price was brought down just a bit to match the quality.