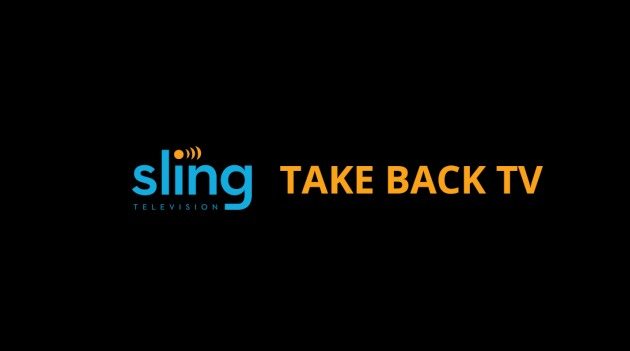 You may have been hearing the name “Sling TV” a lot recently. This live TV service made waves as one of the newest, and most effective ways to cut the cord and bring costs for live TV down to a reasonable level.

If you’re outside of the U.S., you may also want to take advantage of this service. However, as an international user, there are some issues you may run into during the process – particularly when it comes to creating a new account. We’ve created this guide to provide some guidance throughout the process, making it easy for anyone to enjoy Sling TV.

Below, we discuss what Sling TV is, how it works, what it offers, and how you can access the TV channels available on Sling TV. We also discuss the limitations and roadblocks that exist for customers outside of the U.S., along with some helpful tips for getting the most of the money you spend with Sling TV.

Update 6/4/2017: This article has been updated to reflect changes in Sling TV’s signup process that may impact users who live outside of the US.

How Does Sling TV Work?

A subsidiary of Dish Network, Sling TV works just like most other online streaming services out there. All you need to do is create an account on Sling’s website and you’re ready to go. The service even offers a 7-day free trial for those who want to try before they buy.

Two things make Sling TV an excellent option for cord cutters. First is the fact that the service works with the devices you likely already use. If you have any of the following, you could start watching Sling TV within the next few minutes:

Accessing Sling TV from Outside the US

Here’s where things can get a bit tricky with Sling TV. You can access Sling TV from outside of the US, but you may get hung up on the sign-up process. To actually access the service while outside of the US, you may need to have an account already set up. During the signup process, Sling TV does not ask for an address (good), but it does only accept major U.S. based credit cards: Visa, Mastercard, American Express, Discover (bad). Alongside this, you also need to enter a ZIP code to verify the card.

Sling TV only accepts these major U.S. credit cards and verifies them through a U.S. zip code. This means that unless you are a U.S. citizen or resident (or happen to have a good friend in the U.S) who can open the account for you, you might have a hard time getting past this roadblock. It’s a somewhat simple barrier, but it’s just one of the methods Sling TV employs in order to prevent users from accessing the service from outside the U.S.

Sling TV did not always block non-US residents from creating a new account. When we published this article for the first time several months ago, anyone outside of the U.S. could create an account. This is no longer true.

Sling TV also utilizes geographic blocks for content. Anyone hoping to access the service from overseas will need to use a proxy method of some sort. Before the change in account creation, if you created an account from overseas then tried to access Sling TV, you would receive a cancellation email from Sling. The site still utilizes software to detect and automatically block your access.

While you can’t get around the account creation hurdle easily, there are two primary ways to get around the geographic content blocks: DNS proxies and VPNs. We recommend VPNs, and in particular, ExpressVPN. From our experience, it’s consistently the fastest and most reliable VPN on the market. We do not recommend using a DNS proxy.

VPNs have a proven track record of getting past geographic content blocks without succumbing to the DNS blocking techniques certain streaming services use. For example, many users tried to utilize DNS proxies to bypass the Netflix content blocking, but these were the first to get targeted when Netflix started banning proxies.

VPNs are much more consistent in getting past content blocks. ExpressVPN, in particular, is one VPN service we’ve found that gets past every content block we’ve tested it on. We decided to put it to the test for Sling TV.

While connected to an American server on the VPN, I decided to load up one of the live TV streams. My own cable TV package doesn’t include HGTV, so I decided to go with one of my current favorites. Property Brothers it is!

The result was pretty clear here. While it took a little longer to load due to the speed decrease that comes with running through a VPN, the stream worked just fine after it started playing: 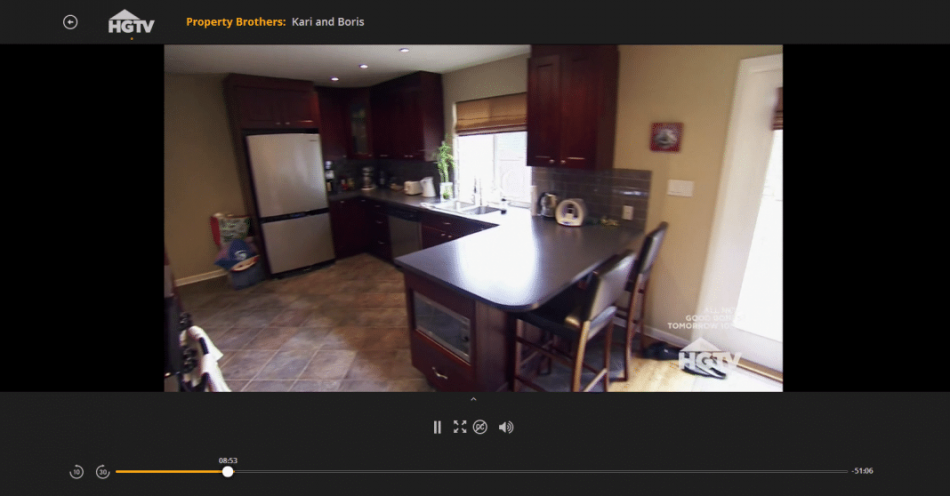 I decided to see what happened if I tried to use to Sling TV while connected to a VPN server outside the US:

Confirming that I was definitely connected to a server in Slovenia, I tried to load up Sling TV again:

I tried to go to their website as well, which resulted in the following error message: 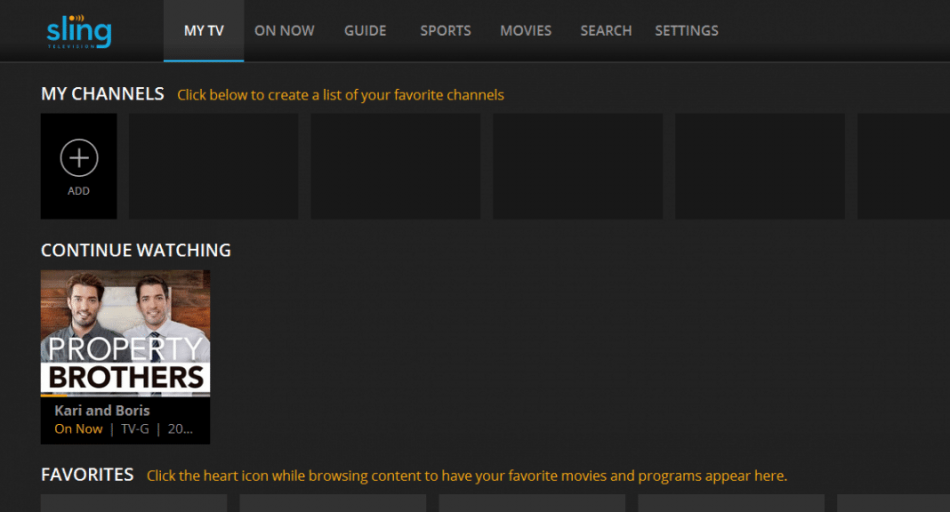 The VPN worked wonders in getting into Sling TV’s service. In rechecking this process in our recent update, we found that it still works. Although we used one service for this, other VPN services may also work. More likely than not, any VPN service that works with Netflix will also work with Sling TV, although we can’t confirm that that will be true in every case.

The two services (Netflix and Sling TV) may employ different blocking methods and may have different blacklisted IP addresses. Nevertheless, VPNs are probably your best bet in getting Sling TV outside of the U.S.

For Windows, you can download either the stand-alone application for Windows 7 and above or an integrated Windows 10 app. However, if you use the Windows 10 version, you’ll get this screen when you log into your Sling TV app: 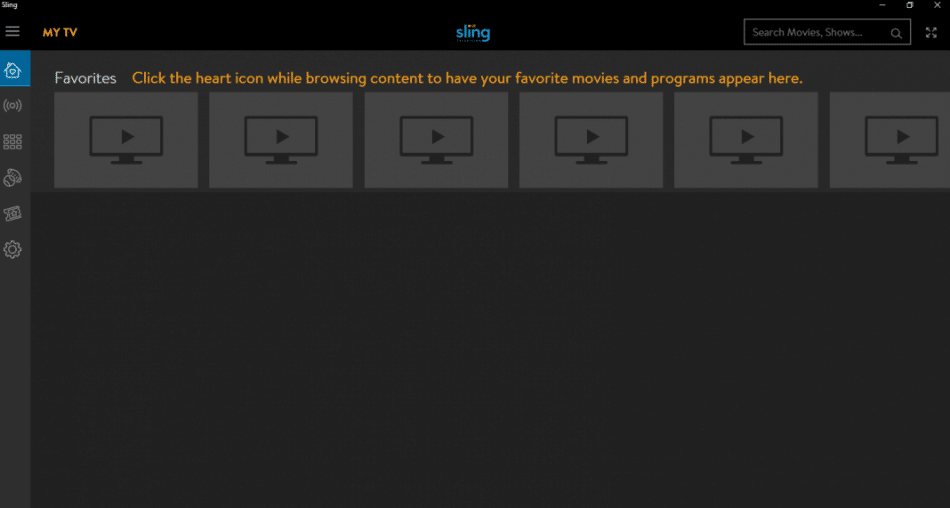 The Windows 10 version doesn’t reveal any shows. In fact, the Sling TV app will tell you to go either go to http://www.sling.com/win10 or call them to setup your channels. If you try going to the website, it’s a dud. There’s nothing there.

However, the Windows 7+ version of the application works as intended, and you’ll get your channels as soon as you log in. It appears that the Windows 10 app simply doesn’t work right yet, so it’s best to avoid using that version.

One of the primary reasons someone might want to turn to Sling TV is cost saving. After all, your average cable plan is fairly expensive. In a 2016 article, Time Magazine noted that the Federal Communications Commission, which regularly tracks cable subscription prices, found the cost of cable was rising. In 2013, that cost was an average of $64, with a 6.5% rise in cost from 1995 to 2013. As Time amusingly highlighted, that was higher than the U.S. inflation rate.

Sling TV can be purchased cheaply at just

(plus relevant taxes), with their higher-tier plan still below that $64 price tag for cable at $45. However, Sling has continued to tack on “extras” which can easily run up your costs to well above what you’d pay for cable if you aren’t careful.

When you sign up, you get to choose one of the basic plans, as we showed earlier in the article. However, below that section, there’s a very long list of feature addons:

Sling TV calls these their “Extras.” Quite frankly, there’s a ridiculously large number of them, which is both good and bad. This is good because it gives you options, but bad because you can experience some pretty high monthly charges if you go overboard with them.

There are also premium channels that you won’t get with the regular service plans that will cost extra. These include:

Finally, you can even pay extra for different regional channels:

Sling TV’s whole modus operandi is that you can purchase your cable package “a la carte.” Which is to say, you can pick and choose the different cable channels you want, without having to be forced into all-include packages that include channels you don’t want.

Still, the feature bloat can get pretty hefty, and pretty expensive. If you pick the Blue package and then load up on just three different extras (for example, HBO, Cloud DVR, and 4 Extras Deal), you’re already looking at $55/mo, plus tax. Not quite the US national average for cable, of course, but getting pretty close to it.

This may not be a huge problem if you’re dialing into Sling TV from outside of the U.S. and don’t normally have access to these channels anyway. Additionally, if you’re a U.S. resident who does a lot of international travel, you more likely don’t have cable package at home to begin with. The ability to connect to these services while outside the U.S. for lower than the cable cost is certainly going to look like a steal. If you choose the Orange package, you’ll save a good amount of money, even if you pick a few of your favorite Extras to get the type of content you’re looking for (such as sports or news).

Is Sling TV Worth It?

We’re going to say that even with the extras Sling TV is certainly worth it. Chances are you aren’t going to load up on so many extras that it makes it more expensive than a regular cable package. The channels you get with the normal packages alone are better than what you’ll get with equivalently priced US cable packages. (Don’t believe us? Click here to check out the research we did on this one).

If you’re not a U.S. citizen, your biggest issue will be figuring out how to get past the US zip code roadblock. U.S. citizens traveling abroad should have no problems, however, as long as a decent VPN is used to avoid the geographic content blocking.

Since Sling TV has been around for 2 years, there has been some competition emerging in the market for cheap, “a la carte” TV. Perhaps the more interesting addition has been YouTube TV, which is still in its infancy and slowly rolling out across the US.

We wrote about YouTube TV not long after it was first announced and are still following it. What’s unique about YouTube TV is not so much how it differs from Sling TV, but how many more users it may be able to capture once it goes mainstream.