According to some reports, more than 60 million people watch the BBC iPlayer outside of UK regions and territories. This holds true, even though the BBC has recently taken measures to stop non-British IP addresses from accessing the iPlayer. There are a number of ways users are gaining access to the iPlayer outside of the UK, including, but not limited to, browser plugins, VPNs, Tor, and DNS proxies. We’ve found that the best method to gain access to the BBC iPlayer is by using a VPN. Using one will you to watch BBC iPlayer in Canada, the US, Australia, or any other part of the world. Let’s explore how you can do that, and why it’s the best method for you to use.

Watch BBC iPlayer Outside of UK Regions: VPN for Laptops and Desktops

The only reason you will not be able to access BBC iPlayer content while outside of the UK is due to geographic content blocking. The BBC website identifies your incoming IP address, which reveals your geographic location. If it determines your IP address is located outside of the UK, it will block your access, instead giving you messages that look like this: 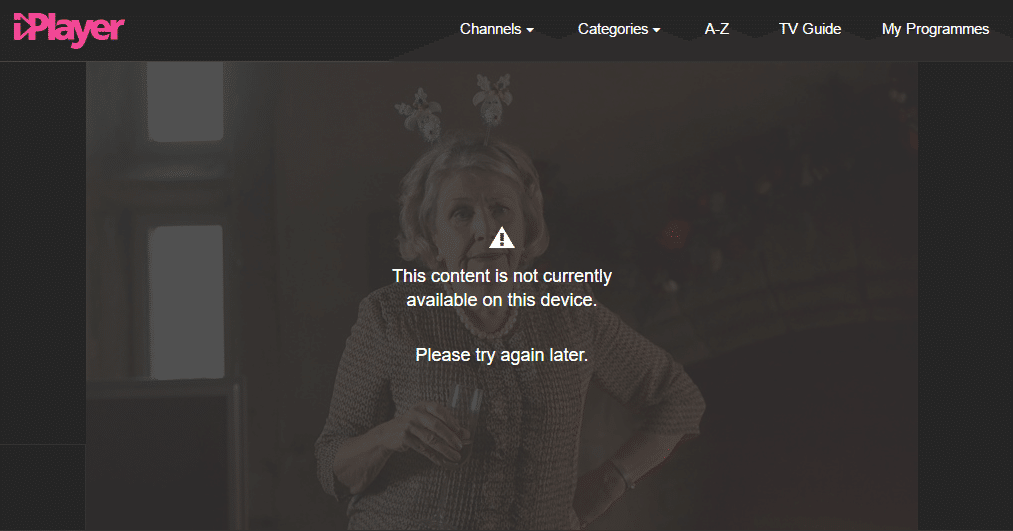 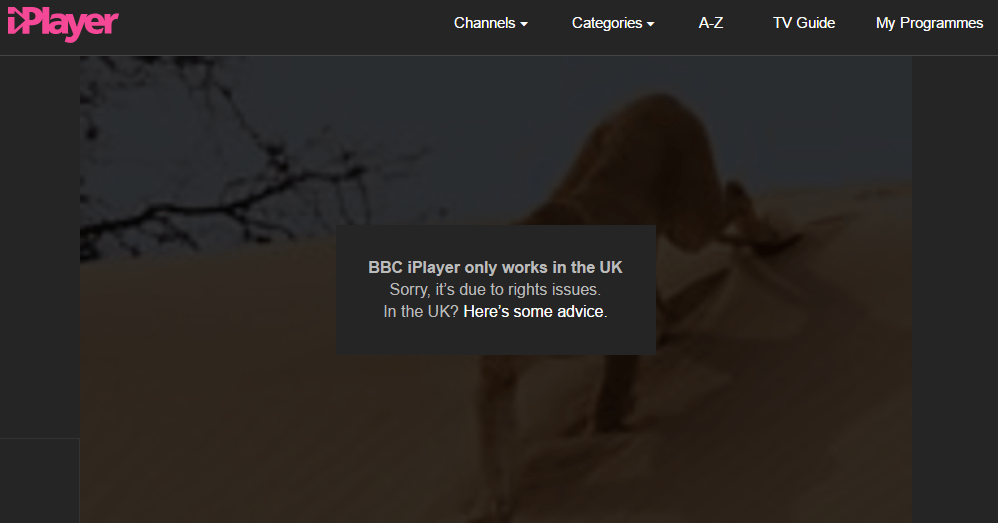 A VPN service, such as ExpressVPN, will help unblock this content for you. The value of a VPN service is that it will assign you a new IP address once you connect to a VPN server located in the UK. Most VPN services will have multiple servers in the UK.

We have tested multiple VPN services here at Flixed, finding that many of the more popular services have somewhat slow UK servers. ExpressVPN, however, tends to have far better bandwidth for their UK servers than most other VPNs.

Will Any VPN Service Work?

There are loads of VPN services out there today. However, an increasing number of streaming services, such as the BBC iPlayer, are employing geographic content blocks. This prevents users like you from accessing the content you want and may even be legally paying to receive.

Such services use various methods to block VPN connections. Some use what’s known as Deep Packet Inspection to detect VPNs, while others will completely block IP addresses known to come from a VPN service. Many VPN services, as a result, are completely blocked.

We recommend users try ExpressVPN for iPlayer. You can now get a special discount for ExpressVPN as well, making it easy and cheap to access all of the BBC’s high-quality content.

Interested in trying out ExpressVPN? You can now get three months of ExpressVPN for free when you purchase an annual plan. If you try it and you don’t like it, don’t stress. There’s a 30-day money back guarantee, no questions asked.

How to Setup ExpressVPN for BBC iPlayer

First, create your VPN account. With ExpressVPN, this should only take a few seconds to.

After clicking on “Get ExpressVPN”, you’ll find yourself on the sign-up page. Here, you’ll need to select your subscription package. Purchasing a larger number of months gives greater discounts. However, if you’re still unsure whether you want the service, signing up for one month should suit you to start. ExpressVPN also offers a 30-day money-back guarantee should you find it doesn’t work well for you.

After selecting your package, you’ll need to enter your payment information. Select a payment method and enter other required information to create your account. All of this information is kept private, as ExpressVPN does not share user information with third parties.

Once that’s done, you’ll receive your account information from ExpressVPN. At this point, you’ll be ready to sign in to your account and get the program setup to run.

Once you’ve acquired your ExpressVPN account information, go to the accounts page and sign-in.

From there, you’ll be able to download the official ExpressVPN application to your computer. You will find the download link on the right side of your screen from the accounts page. The link will automatically install the correct version for your operating system.

If you’re downloading ExpressVPN for a mobile device, you’ll find it in your respective app store (Android or ioS).

Keep your account page open. You’ll need the activation code on the bottom right in a few seconds.

Next, find the downloaded setup file on your computer and double-click on it to run the setup program.

ExpressVPN will open the setup program. Click “Install” to run the program.

After a successful install, you’ll now need the activation code listed in your ExpressVPN account page. Copy and paste that the code where the setup program indicates

As long as your activation code was correct, you’ll get a successful login.

The last step is to connect to one of the available U.K. servers. To do that, select “Choose Location” on the bottom right of your ExpressVPN client.

You’ll now see a long list of VPN locations. U.K. options will be near the top of the list, but you can also do a location search using the search bar at the top.

Select “United Kingdom”, then double-click any of the server locations available.

ExpressVPN will automatically connect to your desired location. Once the connection is completed, your VPN client will have shine green.

I’m Still Getting an IP Block! What Gives?

If you’re using ExpressVPN and still getting an IP block with the BBC iPlayer, the simple answer is: Google.

If you’re using Google Chrome, and you’re signed in, you’re still giving away your current location. Google keeps location data for users, and you, unfortunately, cannot turn that off. You have two options here:

Either of those two options will let you bypass the IP issue. If you’re still getting an IP block, you may need to contact ExpressVPN’s customer service. They’ll just ask to verify your account, but they should be able to help you troubleshoot any other issues.

Use a VPN for Mobile Devices

As with using a VPN for your computer, you may want to use a VPN on your mobile device as well. A good VPN service is one that provides you with multiple ways to connect. This includes a mobile application that operates with the same functionality as what you’ll find with the desktop or laptop version.

We’ve found that ExpressVPN works exceptionally well on mobile. There is no service loss when moving from desktop to mobile, and you’ll be able to connect to the mobile version at the same time as you’re on your laptop or desktop computer.

Most VPN mobile apps will run in the background silently, with an app symbol running along the top of your screen to let you know that the app is functioning. From there, you can load up one of three methods to view your iPlayer content:

If you try to view the BBC iPlayer from your mobile internet browser set to “mobile view”, it may direct you to download the BBC Media Player. From there, any attempt to view content from the iPlayer website will be opened up in the BBC Media Player app instead.

As we’ve already discussed, the key benefit to ExpressVPN for you might be to access the BBC iPlayer while abroad. However, the service offers more functionality than that.

If you open up the Settings option from the client, you’ll be able to explore some of the additional features.

The included Speed Test is an excellent feature. This allows you to test the speed of any of ExpressVPN’s servers, making it easier to find the fastest working server for you. Running the speed test will give you latency, download speeds, and a speed index. Fair warning, however: this will ping every server ExpressVPN offers, which may slow down your computer quite a bit before it’s done.

ExpressVPN offers a large listing of VPN protocols for you to use. The service even provides a helpful explanation of each protocol.

If you want an easier way to manage your VPN connection, ExpressVPN has working browser extensions for Google Chrome and Firefox. These let you connect to your VPN right through your web browser, making managing your connection far easier. And if you’re using a Chromebook, this means you can still have access to ExpressVPN.

The browser extension looks and works just like the regular operating system application, so you won’t lose any functionality at all.

Unblock Netflix and Other Streaming Services

Looking to get more than just BBC iPlayer access? ExpressVPN is also one of the few VPN services that still works with Netflix. Through ExpressVPN, you’ll have access to American Netflix, as well as the Netflix regions in most places where ExpressVPN has available servers.

If you’re new to the iPlayer, you may be wondering if the content is actually worth it. However, the BBC iPlayer is one of the best video streaming options around, offering hundreds of titles and movies. And since almost everything BBC offers comes in stunningly clear HD quality, it’s also the best option for those using streaming devices such as the Amazon Fire TV.

Some shows you may want to binge watch include:

A new drama from the BBC, Come Home stars Kerri Quinn and Christopher Eccleston (of Doctor Who fame). The story delves into a broken family dealing with the effects a divorce.

Love and Drugs on the Streets: Girls Sleeping Rough

The BBC has always been one of the best places to go for impactful documentaries. One of their newest docu-series, Love and Drugs on the Street: Girls Sleeping Rough, takes an in-depth look at British women who are forced to live on the streets and eke a living out of a rough existence.

We need to note that is currently illegal to use the BBC iPlayer without a valid license from the BBC. Ownership of such a license is currently restricted to only those within the UK who also have valid UK IP addresses to use with that license for streaming BBC content online. While the BBC has acknowledged the untapped potential the network has outside of the UK, given the extremely large number of people connecting to the BBC outside of the UK, at present, any effort you utilize to access this content without a valid license is unauthorized. Our guide below is designed to serve those UK residents who may be traveling and who desire to access their valid BBC iPlayer content.