If Netflix and other mainstream on-demand movie services leave you feeling dead inside (or perhaps not dead enough), you may want to check out Shudder – a new boutique streaming service that caters to horror connoisseurs.

Thanks to its greatly improved app support and growing collection of high quality originals, Shudder is even better than it was when it debuted in 2015. However, it’s also a little pricier than it was originally, so is it still a good value option in 2022?

Continue on (if you dare) to get a taste of what Shudder’s originals are like, learn how much it costs to subscribe to Shudder and find out how to watch Shudder’s free TV channel.

Shudder is a horror-oriented on-demand streaming service. It’s available as a standalone over-the-top app, but you can also purchase an add-on version of Shudder through YouTube TV or Amazon Prime Video. A trial period lets gives you full access to Shudder for seven days.

In addition to the paid subscription service, Shudder offers a live feed called Shudder TV. It plays an endless stream of randomly selected Shudder-owned content that anyone can watch for free via the Shudder website. However, to get access to Shudder’s on-demand content and originals, you have to buy a subscription.

Related: What is Shudder in 2020? – Deep On-demand Horror Vault & Originals

When you sign up for Shudder, you get access to around 350+ horror movies, as well as 40+ TV shows. Around 75 of the movies are classed as “Shudder Originals” and should remain on the service forever. However, other movies and TV shows will rotate out unless Shudder renews their licenses.

To help you sort through Shudder content, the service lets you sort its collection by micro-genre. If you’re specifically interested in movies about demonic possession, there’s a Shudder micro-genre for that. Lost classics, smart vampires and Euro-trash are some other examples of micro-genres that you can explore.

Shudder has been all about curation from its inception. In an interview with Den of Geek, Shudder curators Colin Geddes and Sam Zimmerman revealed some of the criteria they use to determine whether or not a horror movie is “good” or not. To make it into the Shudder vault, a horror movie has to be both “wildly atmospheric” and communicate an “awe of the fantastic.”

If you’re into underrated cult movies and B-movies that fall into the “so bad they’re good” category, you’ll likely find a lot to like when you browse Shudder. Shudder’s original content is the real attraction. They feature high quality production, recognizable actors (like Steven Yeun of The Walking Dead fame) and story lines that are designed to glue you to your screen.

Both of Shudder’s subscription payment options are very reasonable. If you pay for an entire year of service up front and get the annual plan, your monthly costs drops from $6 to just $4.75 a month.

When you subscribe, you get full access to the full, ad-free access to the Shudder on-demand vault. There are no upsells or paywalls– and even without a subscription, you can enjoy an unlimited feed of Shudder TV for free via the Shudder website.

Shudder gives you full access to its entire catalog for free for 7 days by default – but you may be able to extend your trial if you can dig up a Shudder promo code.

Once you hit the big red “Start Your Free Trial” button, you can choose between two different subscription payment plans: a $57 annual plan and a $6 monthly subscription.

Since the monthly plan adds up to $72 over the span of the year, if you’re a horror fanatic then it makes sense to go for the upgrade and save $15.

On the other hand, the style of horror that Shudder peddles is definitely not for everyone – so you may want to go with the monthly for a while to get a feel for it. You can always switch your subscription later if you decide that you want to pay for a full year.

Related: Shudder Plans and Pricing in 2020 – Everything You Need to Know

Though Shudder does offer access to some truly good recent horror flicks (2008’s Let the Right One In was once available) the Shudder catalog suffers from the exclusion of other critically acclaimed gems like It Follows and Midsommar.

However, if Shudder manages to keep rolling out original shows that are as good as Wolf Creek, it will likely be able to continue staking out a niche for itself among horror genre fans.

“It is both nightmare and dream, a welcome stride away from the silly “true events” hook of the first film.” – Luke Thompson, Village Voice

“My favorite Shudder Exclusive thus far is Prevenge, the most sublime slasher to strike in quite some time. Alice Lowe’s murderous mommy-to-be only kills because her fetus telepathically orders her to, like a pregnant Son of Sam scenario.” – Matt Donato, Slashfilm

“Every entry in Likely Stories invites you to pull up a chair and stay awhile. It’s about spending time in these nooks and crannies of a cafe, or pub, or loner’s apartment and stewing in a state of general unease.” – Scott Beggs, Nerdist

Hellbender is one of 2022’s most popular films on Shudder so far. This Shudder Original featurs the story of a lonely teen girl who lives in the wilderness with a strangely overprotective mother.

“Having watched “Smiley”, had I realised that this was a social media horror starring a you tube vblogger I would have avoided. But I didn’t realise and therefore wasted 90 minutes of my life.” – Andy Collier, IMDb user

“By repeatedly drawing attention to the hackneyed nature of his film’s many tropes while still giving each of them a fresh spin, DeGennaro gets to have his cake and shoot it too. The results are smart, funny, and ultimately frightening…” – Anton Bitel, Projected Figures

“At times it is oppressively morose, but it has a nice dusting of social realism to go with the violence, and reaches an agreeably nasty conclusion.” Gwilym Mumford, The Guardian

“It’s a smart, distinctive documentary, complete with a dry sense of humour underlined by the Kiwi accents and incongruous tableaus captured by the camera that match the extreme to the everyday.” – Craig Mathieson, The Sunday Age

Shudder’s The Core is a talk show about “the onscreen techniques and real-life psychologies that strike fear into our very core.” 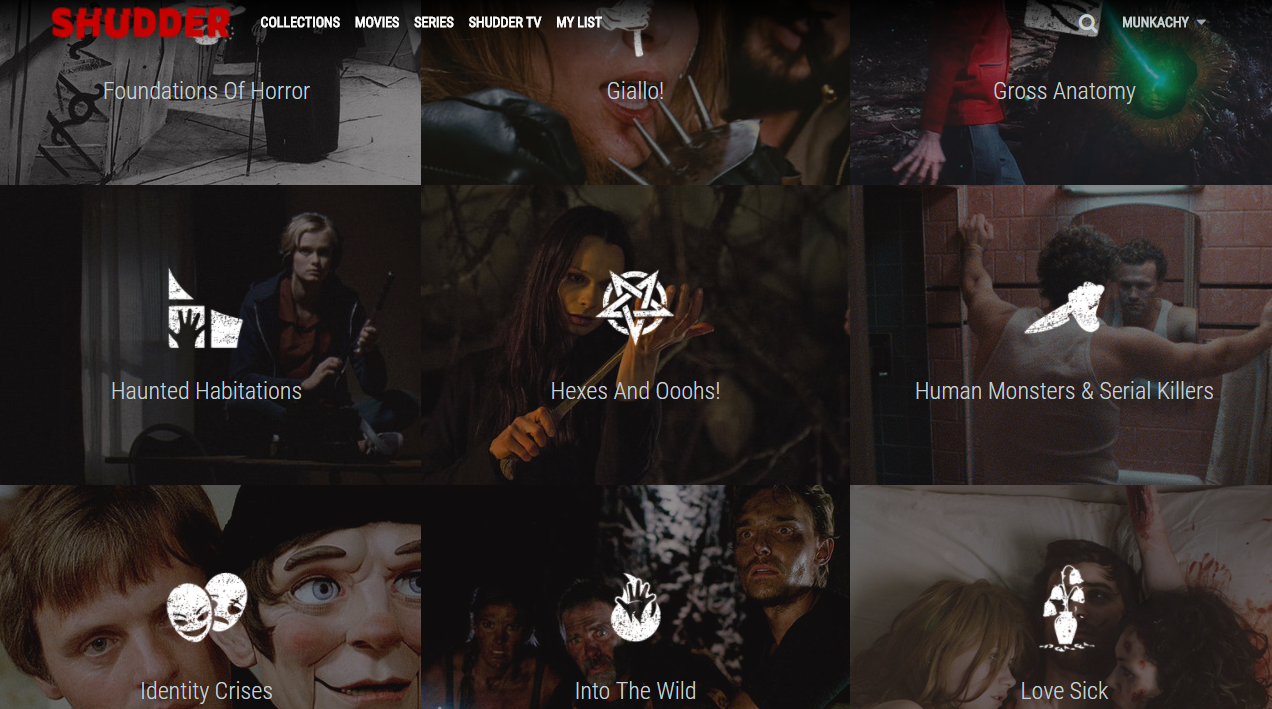 Shudder’s curated horror guides will lead you through the maze of Shudder’s enormous collection of movie titles. Here are a few of their most intriguing playlists:

Ever wonder what Elijah Wood of Lord of the Rings fame and Metallica’s lead guitarist Kirk Hammett think about horror? You can get a sense of their scary movie preferences by checking out some of their favorite flicks on Shudder.

WARNING: Some of the thumbnails on these trailers may be NSFW.

The 3 most popular trailers on Shudder’s YouTube channel showcase the variety of this platform.

Horror Noire is a fascinating documentary, based on the book of the same name by Dr. Robin R. Means Coleman. It looks at horror films throughout history and how they affected and embraced black creators and fans.

With close to 17 million views, The Mortuary Collection trailer is one of Shudder’s most-viewed YouTube videos. It’s the trailer for a film about a strange mortician, told in a Tales from the Crypt style.

The Cleansing Hour is another 2019 big hit from Shudder, following a live-stream exorcism that goes very wrong.

When I tried out Shudder, the newer movies I played looked good – but some of the older flicks were pretty grainy because they were shot a long time ago and nobody bothered to remaster them. That’s not Shudder’s fault, but it’s something to consider before you join.

On the other hand, Shudder does provide some remastered content. Inside Shudder’s on-demand archive you’ll find a 4k edition of Don Coscarelli’s Phantasm.

In 2017, bugs and spontaneous crashes caused many of Shudder’s apps to receive low ratings. Many of these bugs seem to have been ironed out over the past two years.

In 2017, Shudder’s Google Play app had a mediocre three-out-of-five star rating. Since then, that rating has risen to 4.5 stars. To install, visit Google Play and search for Shudder.

Shudder’s Apple app had four-out-of-five stars in 2017, but it now has 4.7 stars. To get started, go to the Apple App Store and type “Shudder” into the search bar.

Shudder on iPhones and iPads

The process for installing Shudder on one of Apple’s mobile devices is the same as what you need to do to install Shudder on Apple TV. Just go to the Apple App Store and search for Shudder by name.

The rating of Shudder’s Roku app’s rose from 3.5 to 3.7 stars in two years. To install Shudder for Roku, just download the Shudder app from the Roku app store.

Shudder on Xbox One

Only 47 people reviewed Shudder’s Xbox One app. It only has a three-out-of-four star rating. The most recent review was written in September of 2018. To install Shudder for Xbox One, scroll all the way to the right on your Xbox home screen and then search for “Shudder” in the store. You will need to type out our full name with your controller.

To find the Amazon Fire TV version of Shudder, go to the Amazon’s Appstore and type in “Shudder.”

Shudder doesn’t offer live support, but you can get in touch with Shudder’s support staff by opening up a ticket. There aren’t many complaints about Shudder’s customer support around the web.

Related: Shudder Customer Support in 2020 – What Kind of Help Can I Get?

How to Cancel Shudder

It’s fairly easy to cancel Shudder, but there’s a small catch: you have to use the same platform you used to sign up to cancel.

Related: How to Cancel Your Shudder Subscription in 2020

Like most streaming services, Shudder won’t give you your money back after you cancel. However, you can continue accessing your account until the next billing cycle arrives.

Shudder is one of the most important indie horror streaming services out there right now. It’s got more low budget and arthouse flicks than anyone should ever watch in one lifetime, plus a growing collection of original films and shows.

In addition to the sheer size of its video vault, Shudder’s curated playlists are another one of Shudder’s best features. To help you make your way through the movie vault with your sanity intact, Shudder’s masterminds have produced expertly crafted playlists to guide you along as you browse.

Perhaps the best thing about Shudder is its original content. Creators like Stan Lee and Neil Gaiman have contributed to it, as have many talented but lesser-known indie directors and writers.

Shudder’s original shows, movies and podcasts are this streaming service’s main attraction. Fans of the genre will enjoy perusing Shudder’s sizable collection of little-known horror indie flicks, underappreciated gems of the past and ”so bad they’re good” B-movies.