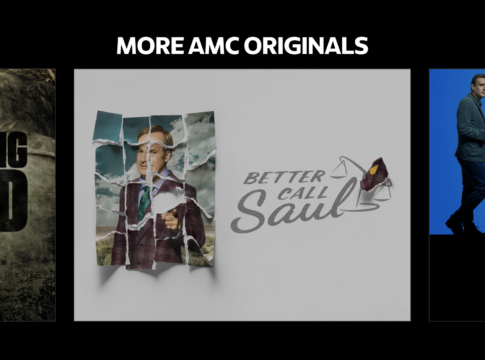 You can watch AMC live without cable with one of the following four options: Philo, Sling TV, and AT&T TV NOW. In this article, we’ll help you decide which streaming option is best for you.

For a limited time, you get Showtime, Starz, and Epix add-ons FREE ($24 worth of Premium TV for 30 days).

With Philo, you can shave a ton of money off of your monthly entertainment bill. Prices start at just $20. That makes this streaming service one of the cheapest options out there for tuning into channels like AMC without cable.

Philo comes with AMC and 50+ other channels. If you want more entertainment, you can get 58 channels for just $20/month.

Philo’s menu includes educational channels like Discovery, History and Science Channel. There are also lots of lifestyle channels like A&E, BET and others. There are no sports and news channels, though.

Philo does have an Android app, but it doesn’t give you the ability to stream Philo’s channels. If you want to watch Philo on your phone, you have to use the mobile version of Google Chrome.

Philo lets you stream to three different screens at the same time from one account. Some competing streaming services– like Live TV and AT&T TV NOW– limit you to two streams unless you pay for an upgrade.

Given Philo’s low subscription prices, you may not expect much in the way of features like cloud DVR recording. But surprisingly, Philo’s cloud DVR lets you record an unlimited amount of TV.

According to Philo’s support site, Philo currently has around 20,000 on-demand titles. Some of that content is of the “catch-up TV” variety. In other words, the episodes disappear shortly after they air. Movies are available, as well.

Sling TV is a streaming service from the Dish Network, the satellite TV provider. As one of the very first cable alternatives, it helped popularize cord-cutting and bring it into the mainstream. With customizable plans and low prices, Sling TV is still very competitive.

When you sign up for Sling TV you have to choose at least one base package. There are two base packages available: Sling Orange and Sling Blue. They both cost $25/month and come with around 30 channels. If you get both base plans, you’ll get a $10 discount on your monthly fees.

Sling TV has apps for nearly every TV device except PlayStation game consoles. That’s understandable though, since PlayStation has its own streaming service: PlayStation Vue.

Sling TV’s account sharing policy is restrictive compared to what other streaming services offer. Sling Orange channels can only be streamed to one device at a time. Up to three devices can stream Sling Blue channels simultaneously.

Like many streaming services, Sling TV has a cloud DVR that lets you record TV content when you’re not around to watch it. You have to pay $5/month to unlock it, though. The capacity of the DVR maxes out at 50 hours.

Though Sling TV’s specialty is live TV, it does have a growing library of on-demand content as well. Another bonus: you can use your Sling TV credentials to unlock a wide array of different TV Everywhere-compatible TV apps. Many of these apps have additional on-demand content that you can enjoy on a variety of TV devices.

AT&T TV NOW had very low subscription prices when it first came out. Now it’s a little bit more expensive. However, it’s still an option if you’re looking for a way to catch AMC shows without cable.

The cheapest AT&T TV NOW plan costs $50, which is pricey compared to other streaming services but cheap compared to what traditional cable companies charge.

One of the best things about AT&T TV NOW is its large channel menu. Just about every channel you can think of is available through AT&T TV NOW, including AMC.

AT&T TV NOW has good app coverage compared to the competition. All the most popular TV devices have AT&T TV NOW apps.

AT&T TV NOW is a bit stingy when it comes to account sharing. The default simultaneous stream limit is two devices, but you can expand that to three devices by purchasing an upgrade.

AT&T TV NOW’s on-demand library is not as good as what Netflix and Hulu offer, but there are some on-demand movies and TV shows to choose from when you can’t find something interesting to watch live.

Netflix currently has almost all of AMC’s top shows except Preacher.

Hulu has only one season of one of the top AMC shows: Preacher.

If you have Prime Video, you’re out of luck. Some AMC shows are available, but only if you buy them.

Here’s a quick summary of AMC’s major websites and apps.

The AMC site has a ton of interviews, clips and extras — and it also has full episodes of many of its shows. To unlock the full episodes, you have to sign in with TV Everywhere credentials.

The official AMC app is very similar to the AMC website. Clips are free, but you have to log in with TV Everywhere to watch full shows.

In addition to the main AMC app, there are several other AMC apps you can download that give you access to additional content. Some of the apps look gimmicky, but since they’re free and you don’t need TV Everywhere to check them out they may be worth a look.