Sling TV has been losing subscribers for the past few quarters, entering 2021 with over 2.5 million subscribers and dropping to 2.25 million earlier this year. This is likely due to a combination of factors, including increased competition, channel ommissions, and a price hike from $30 to $35/month.

But is Sling TV the right service for you in 2022? Read our Sling TV review to find out.

What Is Sling TV?

What really got people’s attention, however, was Sling TV’s price — only $20 per month when it first launched. Sling TV now offers limited local TV, has more features, supports more TV Everywhere apps, and has increased its channel offerings. Furthermore, even as its competitors have zoomed past their $30 per month, Sling TV’s $35/month is still one of the lowest prices out there.

Being among the first to market and the cheapest internet TV service helped make Sling TV one of the most popular internet TV services in the United States. It’s definitely worth a look for cord-cutters considering which service to go with.

Sling TV’s biggest faults are the way it presents its features and the somewhat confusing way it delivers its streaming packages. Still, the wide range of bundles and premium channels available as add-ons make Sling TV a versatile and highly customizable service with a low base price.

Sling TV offers dozens of channels at a low cost, must-have features, and a large number of apps. But it’s far from a perfect solution for cord-cutters.

Sling TV’s packages differ mostly in the primary channel they emphasize. Sling Orange, for example, features ESPN and Disney Channel. Sling Blue focuses on FOX networks, like local Fox broadcast networks and FX. Sling Orange’s channels are more expensive to offer, so the package has a smaller number of channels, while Sling Blue offers more networks, making it a good value if you enjoy entertainment TV.

Sling Orange & Blue costs $50/month and gets all the channels, making the decision much easier — if it’s within your budget.

Sling Orange provides 30+ channels for subscribers. Sports fans will find value in having such low-cost access to ESPN, ESPN2, and ESPN3. There’s also something for the family with Disney Channel, History Channel, and Investigation Discovery, among others.

Sling Blue offers local broadcast network affiliates for Fox and NBC in select markets. You also get the Fox News Channel and MSNBC for news, while for sports you get FOX Sports 1 and NFL Network.

If you’re having a hard time choosing between Sling Orange and Sling Blue, guess what? You don’t have to! You can get all of the channels offered by both plans by opting for the Sling Orange & Blue channel package.

Our TV guide gives you detailed information about any program listed, including season number, and is color-coded based on the type of program streaming. You can also access individual channel guides for networks available through Sling TV, including IFC, MSNBC, AMC, A&E, History Channel, and more.

Sling TV supports all Amazon Fire TV devices, including Amazon Fire TV and Fire TV Stick. The Sling TV app has a fair rating on the Amazon app store with a 3.8 out of 5 from over 107,000 reviews. Frequent buffering and stuttering were common complaints.

You’ll need an Apple TV 4th generation or better (tvOS 11.0 or higher) to use Sling TV. If you’re using an iPhone or iPad, the Sling TV app requires iOS 11 or higher.

The App Store now combines reviews for the iPhone, iPad, and Apple TV. Sling TV’s app boasts 4.6 out of 5 stars from over 223,000 reviews. The few complaints that exist are in the same vein as most others: some stuttering and buffering when using the service.

You can use the Sling TV app on Android devices so long as your device is running Android 4.4 or higher. The app has a 4.0 out of 5 from over 85,7000 reviews on Google Play. There are some complaints about a recent update ruining the app’s functionality. Older reviews were more positive, so it’s likely Sling is going to work out whatever bugs were introduced in recent app updates.

You can find the on-demand content from Sling TV by going to the “Channels” page, and then clicking on the specific channel you want. From there, you’ll have access to both movies and TV shows on those channels. You’ll also find past sporting events from networks like Fox Sports and ESPN.

As of 2020, Sling TV offers DVR Free with every plan and an add-on called DVR Plus. The DVR Free option provides 50 hours of storage while upgrading to DVR Plus for $5/month bumps that up to 200 hours.

Sling TV is a bit odd with its customer support. Like many other services, it provides customer support primarily through its online knowledgebase articles. If you can’t find an answer there, you can contact Sling TV directly through either its Facebook or Twitter accounts, or its on-site live chat service.

The on-site live chat is also not a great option. We struggled to get the chat room to even load, even after waiting for several minutes. 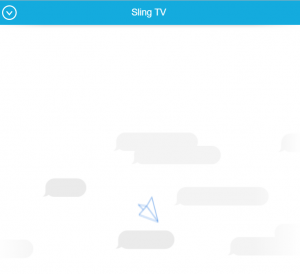 Nevertheless, Sling TV has kept its prices relatively low compared to competitors, a sign it is dedicated to the idea that cord-cutting should be inexpensive. That low price requires some give and take, especially when it comes to streaming quality and features. But if you really need to cut the traditional cable bill, Sling TV is an alternative worth your consideration.