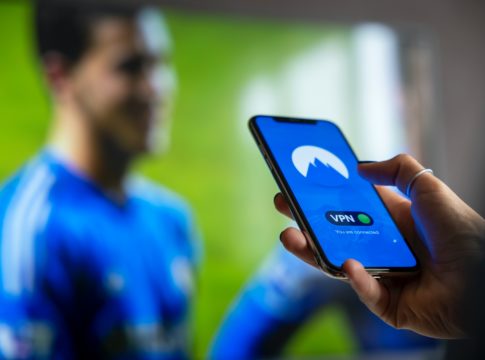 If you’re traveling outside the country – or perhaps living overseas – odds are you won’t be able to stream your favorite HBO movies or Hulu shows. If you’re an Apple user, you should know how to use a VPN to unblock streaming on iPhones.

But a VPN can solve that.

StrongVPN, VyprVPN, PureVPN – they all sound so similar. We explain what to look for, then offer our top 3 choices to get around geo-blocking on your iPhone: NordVPN, ExpressVPN and PIA VPN.

Put as simply as possible, a virtual private network (VPN) creates a “tunnel” to hide your online presence (and therefore your location) from others. If your local internet connection is the entrance to the tunnel, your VPN’s server is the exit.

For example, it rains during your trip to Puerto Vallarta, so you decide to watch WNBC. You simply open your VPN’s iPhone app, tap on the New York server, and voila – Sling TV thinks you’re back home in Manhattan.

What makes the best VPN for iPhones?

All major VPNs have apps for iPhones and iPads, so your favorite iOS device is probably covered. But there are 4 key factors you should consider when choosing a VPN for streaming over your iPhone: apps, speed, servers and security.

Why do apps matter when choosing a VPN for iPhones?

You may currently be thinking about unblocking streaming for your iPhone, but it makes sense to choose a VPN you can use on other devices. Especially if you want to stream local news or sports from other markets on your big TV.

What speed do you need for streaming over VPN?

According to Netflix, you need at least 5 Mbps to watch videos in HD. But if you’re streaming 4K content, you should have between 25 and 40 Mbps.

If you’re using your cellphone data, most LTE speeds range from 20-30 Mbps. If you’re using wi-fi, make sure you’ve got a good connection on a network that can handle streaming.

A VPN can have an impact on your internet speed, but the leading VPNs reliably deliver speeds of hundreds of Mbps. The same can’t be said for free VPNs.

Why do servers matter when choosing a VPN?

While VPNs boast about how many countries they have servers in, you only need to be concerned about the countries you want to “be” in.

Also, Netflix lets you log in to your account worldwide and access the local Netflix library. So, anime fans would probably want to make sure their VPN has servers in Japan.

Streaming services may also block an IP address with a lot of traffic (like a VPN’s server might send). Therefore, choose a VPN with multiple servers in the country (or even city) you want to watch in. That way, if one isn’t working, simply disconnect and try a different server. (You may have to clear your cookies and refresh the page.)

Why is security important when choosing a VPN?

As people continue to cut the cord and choose streaming over cable or satellite TV, the VPN industry is growing right alongside the streaming industry. New vendors are popping up all the time – with great deals, of course – but they may lack security experience. Or worse.

It’s always best to choose an established VPN with a proven track record.

Other things to consider when choosing a VPN

Customer support should be 2 things – knowledgeable and available. When leading VPNs have 24/7 live customer support, there’s no reason to use a service that only answers the phone during Pacific Time business hours. Especially if you’re trying to stream the best movies on Starz while sipping a Peroni in Milan.

Privacy-minded cord-cutters will also want to take note of the VPN’s home country. Its laws dictate what kind of information about you they’ll collect, keep and share with the government.

The industry is so competitive that you should never pay full price for a VPN – at least until your initial subscription is up. The best prices will come with a 2 or 3 contract, but it’s worth it if you choose a reputable VPN.

Our top pick: Use NordVPN for streaming with iPhone

With 10 years of experience to back it up, NordVPN has won numerous awards for service and security, and it updates its apps on a regular basis.

NordVPN’s iOS app has a commendable 4.7 stars from 3.8K ratings in the App Store. In addition to iPhones and iPads, NordVPN has a mobile app for Android and desktop apps for macOS, Windows and Linux. It’s also got apps for Fire TV and Chromecast streaming devices, and gaming consoles PlayStation, Xbox and Nintendo Switch.

With server speeds benched at 760 Mbps, NordVPN is optimized for streaming. It has 1,970+ servers at 15 locations in the United States, and 5,400+ around the world.

A leader in security, it has features such as a double VPN and a special Tor connection, as well as its newly launched Meshnet, which lets you securely access your other devices through your own private “tunnels”.

From Philo to Hulu to fuboTV, we’ve tested all major streaming services and been able to watch all of them with NordVPN.

Signing up for the 2-year plan gets you NordVPN for $3.29/month, placing it squarely between cheap and the industry average.

There are a lot of VPNs that can unlock streaming on your iPhone, so here are 2 excellent options from either end of the price scale.

Unblock streaming on your iPhone with ExpressVPN

It’s a great choice if you want to stream on more than just your iPhone, as it’s got apps for a wide range of living room devices, including AppleTV+, Chromecast, Fire TV, Roku and Nvidia Shield, as well as Android and Samsung TVs.

Its 15-month plan works out to $6.67/month, placing it well into the expensive range.

Unblock streaming on your iPhone with PIA VPN

At $2.03/month with a 3-year plan, Private Internet Access (PIA) VPN sits safely in the cheap range of VPNs, but it more than delivers.

How to use a VPN on an iPhone

Setting up a VPN to unblock streaming on iPhones takes just a couple of minutes.

Simply download and install your VPN’s app from the App Store. Choose the location you want and all of your data will now pass through that tunnel.