Thanks to Spotify (and other music streamers), the days of carrying around CDs or waiting for a song to come on the radio are long gone. But unlike CDs or the radio, you may not always be able to access your streaming music library. Read on to learn how to use a VPN to unblock Spotify in almost any situation.

Do VPNs require a special device?

Aside from your desktop, laptop, or mobile device, you won’t need any additional hardware to connect to your VPN. It’s purely a software solution. But for the sake of simplicity, the first thing to do when choosing a VPN is to make sure it supports the devices you plan to use it with.

The vast majority of major VPNs have apps for Windows, iOS and Android. Most have an app for Mac, but the coverage is less than it is for Windows.

If you’ve got a Linux computer, a Windows Phone or one of the last remaining Blackberry smartphones out there, you may not find a native app available. But all is not lost. Most major VPNs support OpenVPN, which has clients for Windows, Mac, Linux, IOS and Android. It’s just a less direct way to use your VPN.

Of all the VPNs we looked at, ExpressVPN supports the largest range of devices.

Common reasons why Spotify is blocked

The network you’re on is intentionally blocking Spotify.

This is most often the case at schools and workplaces, but can also happen with coffee shops or other public Wi-Fi networks.

Spotify might be geo-blocked or censored in your region.

Spotify is one of the most popular music streaming services on the planet, but you won’t find it everywhere. There are some countries where it’s not available at all.

As distribution rights vary from country to country, some songs, albums, or artists may not be available in all Spotify libraries.

How to unblock Spotify at work or school with a VPN

If you’re using a work computer or one owned by the school, there’s a good chance you’ll need admin privileges to install the VPN software. Otherwise, you’ll need to use your own device. But from there, it’s pretty straightforward:

How to unblock Spotify if it’s not in your region

The music streamer is currently in 180+ countries around the world, which means there are still a dozen or so countries without Spotify. For example, China, Iran and Myanmar are 3 places where Spotify hasn’t launched, and it suspended services in Russia back in March “until further notice”. Those 4 countries alone represent around 1.7 billion without direct access to Spotify.

We should note that listening to Spotify on your mobile device in a country where it’s banned or not available poses an extra hurdle. There’s a high probability that the Spotify app won’t be available in your phone’s app store, so you’ll need to download it from a 3rd-party app market, then sideload the app. The same might be said for your VPN, in which case you’ll need to get its app the same way.

Once you’ve got everything lined up, the process is the same as an office worker in Seattle looking for Nirvana. 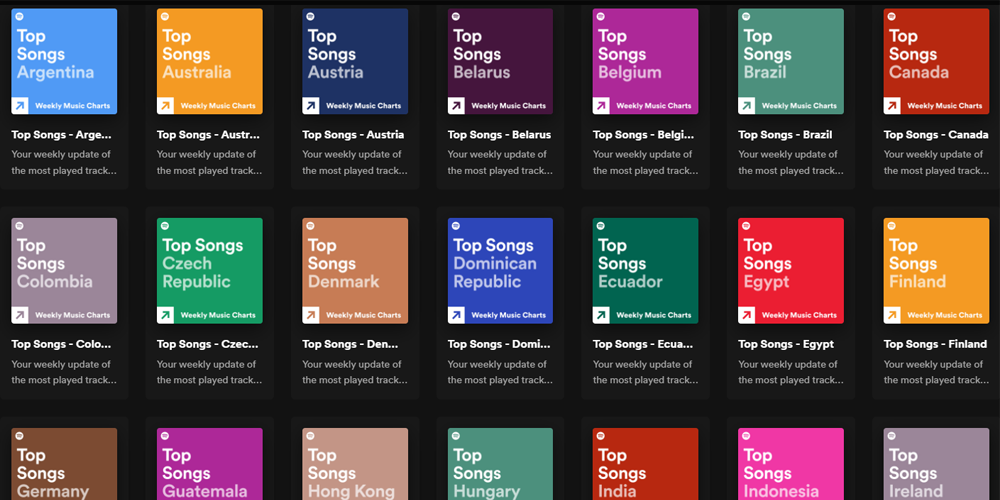 Have you ever fine-tuned the perfect Spotify playlist, only to find some of the songs no longer available a few months later? There are a variety of reasons that you may not find a song, album or artist on Spotify.

The music industry is notoriously secretive, protective and convoluted when it comes to music distribution rights. Many deals are not international in scope, so a song available in the United States might not be available in Canada, and vice-versa.

In rare instances, a song might be banned in a country – such as when Dire Straits’ smash hit Money For Nothing was temporarily banned in Canada.

In situations where it’s a licensing or censorship issue, all you need to do is identify the country in which the song or album is available on Spotify, then log in to its corresponding server on your VPN.

Some artists have been reluctant to embrace streaming digital music. They’ve either left the platform or refused to have their music on Spotify at all. Some of the most notable holdouts have been Prince, the Beatles, Pink Floyd, Taylor Swift and Coldplay. But nearly all of them are now (back) on Spotify.

Two recent notable departures are Neil Young and Joni Mitchell. But while the other holdouts have generally been about money, these are political. The only way you’ll be able to listen to either artist on Spotify is if you purchase their music elsewhere and add the local files to your Spotify library.

How to choose a VPN to unblock Spotify

There are a few key features you’ll want to look for when choosing a VPN to listen to Spotify – apps, speed, servers and security.

Make sure the VPN has apps for your devices.

As mentioned above, it’s better to choose a VPN that has a native app for the devices you’ll be listening to Spotify on. Many VPNs may state that they “support” your game console or streaming box, but that doesn’t mean they have an easy-to-use app for your device. It may require using OpenVPN or configuring your router. And why would you bother with that when you can choose a VPN with a native app?

Make sure the VPN offers the speed you need.

The bandwidth (ie: internet speed) required to stream music is much lower than what you need to stream movies or shows on something like Sling TV or Hulu. Unless, of course, you’re using a streaming service with high-definition lossless audio.

Spotify lets you choose your streaming audio quality, but not streaming lossless audio keeps its recommended speeds down to around 0.32 to 0.64 Mbps. (Bandwidth changes depending on your audio quality settings.)

Spotify’s web player audio quality is locked at 128 kbit/s for Free accounts and 256 kbit/s for subscribers with Spotify Premium. But when using desktop or mobile apps, Free users can choose from Low (24 kbit/s), Normal (96 kbit/s) and High (160 kbit/s). Premium subscribers get all 3 of those choices plus Very High (320 kbit/s).

Unless you’re using a free VPN, you shouldn’t have trouble streaming audio qualities of 320 kbit/s and lower. ExpressVPN offers some of the highest speeds out there and delivers up to 89% of your base internet speed.

Make sure the VPN has servers in the countries you want.

The major VPNs list which countries they have servers and even how many in each country. Obviously, you’ll want to choose a VPN with multiple servers in the country with the Spotify library you want to listen to.

Your Spotify “home country” is automatically based on where you’re located when first signing up. You cannot use a VPN when signing up. However, typing in a Spotify country-coded website address lets you sign up anywhere in the world. You can also change your home country in Settings later, but the process is different for Free and Premium users. With a Free account, you need to be located in the country you’re changing it to. Which you can then do with a VPN.

The reason your home country might matter is that with the Free account you need to log in to your “home country” every 14 days. The Premium plan lets you listen anywhere in the world without limits.

Keep in mind that with Spotify Premium, the price can vary greatly between countries. For example, it’s around $1/month in Turkey and almost $14/month in Andorra. Payment options will vary from country to country, but many accept PayPal, Apple Pay and even gift cards, which can be purchased on Amazon.

The main purpose of a VPN is security. And one of the main reasons to avoid free VPNs is also security. Free VPNs are more likely to track your data and offer little to no protection against online threats.

Choose a VPN that offers AES 256-bit encryption and has a solid reputation for its security.  ExpressVPN uses AES-256 and other high-level security protocols.

Can I use a free VPN to unblock Spotify?

“You get what you pay for” is an old adage for a reason. And it couldn’t be truer with VPNs. security, time limits, bad speed, data tracking, ads and throttling, you’ll spend more time trying to get your VPN to work than you’ll spend listening to music.

Check out The Ultimate Guide to VPNs for Streaming for more info, answers and tips. And if you’re mainly listening to Spotify on your iPhone, you might want to take a look at How to Use a VPN to Unblock Streaming on iPhones.