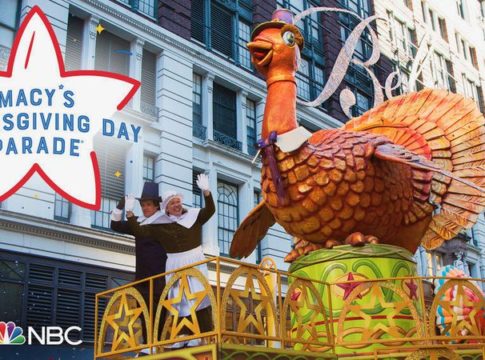 Thanksgiving is quickly approaching and therefore so is the highly-anticipated, annual live Macy’s Thanksgiving Parade. The parade returns to NYC on Thursday November 25th, in celebration of its 95th anniversary. It’ll air live on NBC from 9am to noon in all time zones, and again from 2pm to 5pm. Special guest performers include Chris Lane, Darren Criss, Kelly Rowland, Nelly, and many others.

In the event that you can’t catch the parade live from the streets of New York City and you’ve also cut the cable cord, we’re here to walk you through how you and your family can catch all three hours of festivities from the comfort and warmth of your own home.

This year, the Macy’s Thanksgiving Parade will be airing on NBCUniversal’s brand-new streaming service Peacock. To watch it on Peacock, you’ll have to subscribe to Peacock Premium, which costs $4.99/month (or $49.99/year) and is ad-supported. If you want to forego the ads, you can subscribe to Peacock Premium+ for $9.99/month (or $99.99/year) – which is still way below the price of most other streaming services. Peacock also offers a 7-day free trial for their premium subscription.

With Peacock, you can watch live sports, including tons of WWE content, and other live events. You can also watch plenty of old TV favorites like The Office and Saved by the Bell.

To learn more about what’s airing on Peacock, click here for our Peacock TV Guide.

NBC is offered on Sling TV’s blue package, which costs $35 a month and comes with over 45 channels including Bravo, National Geographic, Nick Jr., BET, CNN and more. Sling TV offers a 3-day free trial, so you can take advantage of this to catch the Macy’s Thanksgiving Day Parade.

You can catch the Macy’s Thanksgiving Parade live on other streaming services like fuboTV, Hulu + Live TV and YouTube TV. All three streaming services offer a free trial, so you can sign up and watch the parade without having to make a financial commitment right away. If you like what they have to offer, you can let your free trial end and continue on with your subscription – otherwise, just set a reminder on your phone to cancel it before the end of your trial period.

All three streaming services have DVR, so you can record the parade and watch it later in case you can’t catch it live. fuboTV also comes with an impressive sports lineup, while Hulu + Live TV and YouTube TV stand out thanks to their impressive on-demand libraries.

You can also watch NBC and your other local stations like CBS, Fox, ABC, and the CW for free with an Over-The-Air (OTA) antenna. It’s super easy to do, and works just like a radio station (but the TV version, of course). To learn more about how to watch NBC with an OTA antenna, click here.

You can also catch a free online live stream of the parade on the NBC website and app. If you have a subscription to a “skinny bundle” internet TV service, like the streaming services mentioned above, you also get access to NBC.com, and the NBC app for iOS and Android, Amazon Fire TV, Apple TV, Roku, and Android TV. If you have an iOS or Android phone, you can also cast the app on Chromecast.

To watch the Macy’s Thanksgiving Day Parade on the NBC website or app, simply log in with your NBC account, select the “Link Provider” option, and enter the internet TV service to which you subscribe.

After you do that, you’ll be able to watch live streams, on-demand episodes, and exclusive web content on the NBC site and app.