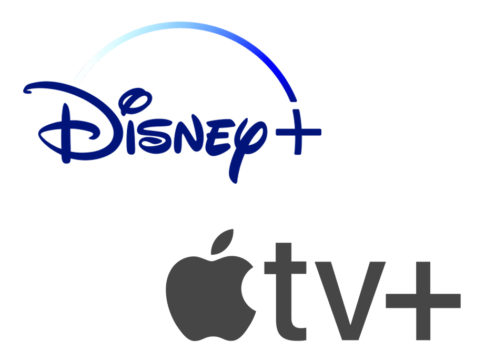 They are two of the most valuable brands on earth. An entertainment pioneer and a vanguard of technology. We look at Disney+ vs Apple TV+ to see how these household names stack up against each other on the streaming landscape.

Both services offer only one plan, priced below $8/month, with ad-free, on-demand original content. Now let’s see how they differ.

With 99 years of producing premium entertainment under its belt, a dedicated Disney service was inevitable. And to widen its appeal, it has already started licensing 3rd-party content in overseas markets.

Instead of dropping full seasons at once, like Netflix and others, Disney+ releases new episodes on a weekly basis, more like regular TV.

Apple pioneered home computers with the Mac, revolutionized the music industry with the iPod, and pretty much invented the smartphone. But it has lagged behind in streaming TV.

Apple TV+ takes a varied approach to releasing new episodes, but most come out on a weekly basis after the first 3 episodes drop at launch.

This handy table gives you all the key points at a glance.

Even though it’s almost twice the price, Disney+ is the better deal. Apple TV+ isn’t expensive at just $4.99/month, but it will need a lot more content to appeal to many people.

With its vast library of Hollywood’s most premium content, Disney+ is a deal at $7.99/month. That’s less than Amazon Prime Video ($8.99) and the cheapest HBO Max plan, which is $9.99 with ads.

If you’re concerned about the range of content, the Disney Bundle includes Hulu and ESPN+ for $13.99, which guarantees there’ll be something for the whole family.

At 5 bucks a month, Apple TV+ won’t break the bank on its own, but having multiple services can add up. As it stands now, Apple TV+ should be viewed as an add-on, rather than as your primary (or only) streaming service.

Apple TV+ also has an annual subscription for $49.99 (although it’s poorly advertised), which is equal to 2 free months a year.

You can also get 3 months free when buying an Apple device, but considering the price of Apple devices, this might not be very compelling for some.

This is an easy win for Apple TV+. It offers a 7-day free trial, while Disney+ doesn’t offer one at all.

Keep in mind that you can lose your Apple TV+ trial the moment you click “cancel”. You also need to cancel it at least 24 hours before the trial ends, or you’ll be charged for a whole month.

Disney+ boasts over 7,000 episodes across 70+ TV shows, as well as more than 500 movies. Not only that, its library includes some of the biggest movies and franchises in history. Apple TV+ has around 50 TV shows and just over 30 movies.

Disney abandoned its practice of locking away movies in the “Disney Vault”, and its entire film library is available to stream. The content is categorized into 5 content hubs: Disney, Marvel, National Geographic, Pixar, and Star Wars.

Markets outside the US have a 6th hub with mature content called “Star”. If Disney+ decides to add such a hub in the US, owning 20th Century Fox already gives it 95 years of movies to draw from. But if you don’t want to wait, upgrading gets you Hulu and ESPN+.

Disney is one of the most iconic studios in history, so original content is its strongest draw. But it’s not all Snow White and Mickey Mouse.

Here are some popular titles that have nothing to do with The Magic Kingdom:

What to Watch on Apple TV+

If Disney+ has too much kid’s content for some, Apple TV+ poses the opposite problem, with most content geared toward an older audience. However, it has been expanding its kid-oriented lineup with shows like Wolfboy and Puppy Place.

Apple TV+ originally launched with an original-content-only mindset, but quickly discovered that’s no way to compete against heavyweights like Amazon Prime Video and Disney+.

Here are a few shows we recommend checking out during your free trial:

This is a close matchup, but Disney+ offers a little bit more for the home theater enthusiast.

With over 100 titles in 4K UHD and HDR, Disney+ also has a growing library of Dolby Atmos movies and shows. There are also many titles in Dolby Digital 5.1 surround sound.

HDR10 is the default HDR format, but select titles are available in Dolby Vision. Furthermore, you’ll also find some IMAX Enhanced content, which makes full use of your screen.

All Apple TV+ original content is available in 4K and HDR or Dolby Vision, and most shows support Dolby Atmos and 5.1 surround sound.

With unlimited downloads on up to 10 devices, Disney+ wins on device options (and  policy clarity). Your downloads never expire as long as you have an account and you login with the applicable device at least once every 30 days.

You’ll need the Disney+ app to download, but its extensive device support includes Mac, Windows, and Chrome OS, which covers about 90% of the laptops on the planet.

Apple TV+ also has unlimited downloads. However, the devices that support downloads are limited to Apple devices (iOS and Mac OS), which means that 70% of the world’s smartphones running on Android are out of luck.

Limits on concurrent devices, downloading the same show, and how long before downloads expire are not expressly stated by Apple.

Disney+ can be viewed on web browsers, native apps for Chrome OS, Mac, and Windows, as well as Android, iOS, and Fire Tablets. There’s also support for most major media players, smart TVs, and STBs.

For the full list, check out the Flixed Disney+ Devices page.

Apple TV+ disappoints when it comes to devices, as it barely supports devices that aren’t made by Apple. There’s no app for Android, the biggest OS on the planet, and there’s no Windows app, meaning 85% of the market must use a browser.

Apple TV+ allows 6 simultaneous streams, which is 2 more than Disney+.

You can share your Apple TV+ subscription with up to 5 family members, but everyone needs to have their own Apple account. Kids under 13 need parental permission to create an account.

Disney+ allows 6 additional profiles, which are created as easily as entering a name, choosing an icon, and clicking save. An array of parental controls with multiple maturity ratings are available for kid profiles.

Disney+ takes the “W” in 6 of our 7 criteria, and for good reason. The amount of content is at least 10 times what you’ll find on Apple TV+, and it supports far more devices, particularly Android. However, US content is still mostly family-friendly, so you’ll need the Hulu upgrade for more mature options.

While Apple TV+ has a long way to go, at least it’s producing high-quality, star-studded content. It’s also priced low enough that it may be worth signing up for a few favorite shows.