Semper Media Center (SPMC) is the most well-known Kodi alternative for Android. SPMC’s creator Koying is a former member of the official Kodi development team. After he left the Kodi team about a year ago, Koying started pushing out regular updates for SPMC. In recent months, Koying has improved SPMC by adding several tweaks and features designed to make the core Kodi player run better on Android.

Read on to find out:

The ideal way to experience SPMC is with an Android device. Though it is possible to use SPMC on Mac or Windows via an Android emulator, this is not very practical way to run SPMC because emulators tend to eat up a ton of CPU power.

Still, if you don’t have an Android device and you just want to see what SPMC is all about, you can get a taste of it via the Android emulator known as BlueStacks.

The best way to install SPMC

SPMC’s Android app is easy to install. Just hop over to Google Play on your Android device and type SPMC into the search bar. Then, click the green Install button to download it to your device.

Run SPMC on macOS and Windows 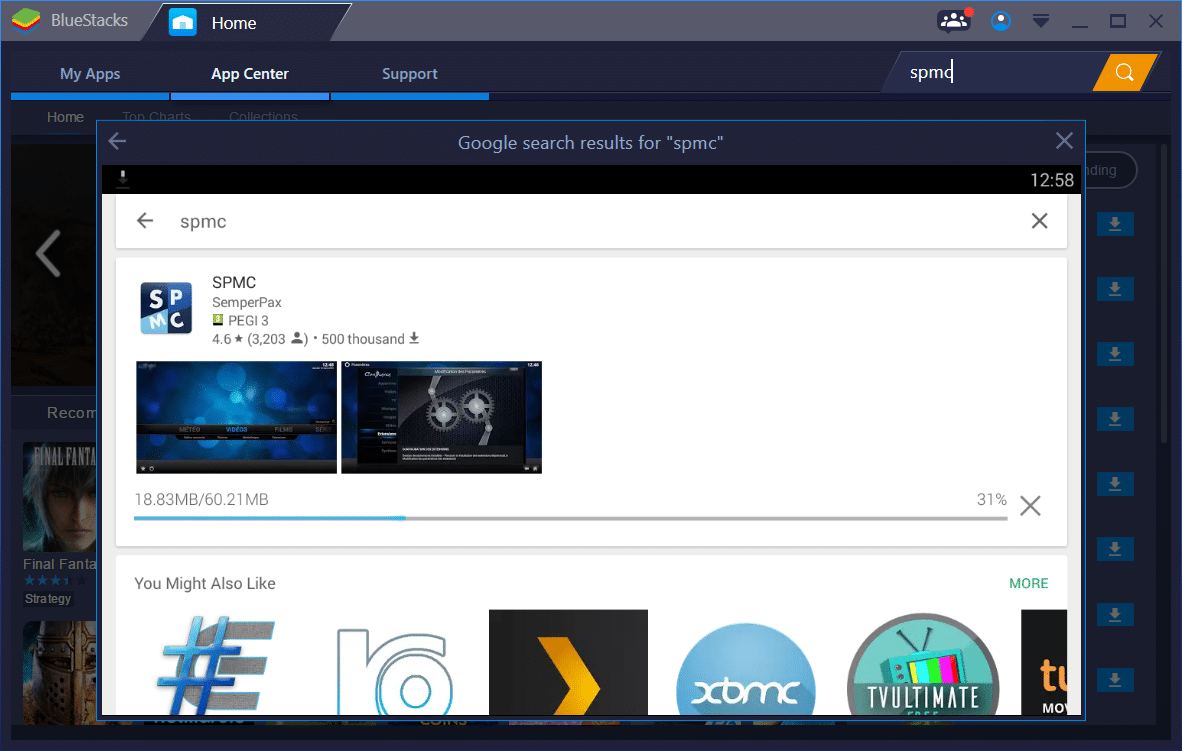 After installation is complete, SPMC will appear in your My Apps menu.

The Android-centric Version of Kodi

If you’re curious about why SPMC only runs on Android, the answer lies in the drama surrounding how SPMC came to be.

SPMC’s creator Chris Koying originally worked for the official Kodi team. He won the respect of his peers by developing the Kodi Android app all by himself. But in 2016, he left the Kodi team on a sour note.

Apparently, Koying was annoyed that the Kodi team was putting so much effort into developing Linux-based flavors of Kodi. He believed that the team should switch gears and focus on Android.

When Koying posted his goodbye thread in the Kodi forum, numerous Kodi fans responded to express regret over Koying leaving. The majority of the commenters seemed to agree with Koying’s opinion that the team should focus on Android instead of Linux.

In addition to receiving messages of support from Kodi’s fan base, a notable Kodi developer took Koying’s side as well. Sympathizing with Koying’s point of view, Kodi developer Tim Warble remarked in a reply that the team needs more Android developers. He added that Android development would “slow to a crawl” without Koying’s presence on the team.

One of the leading Kodi developers Rainer Hochecker (aka FernetMenta) commented as well. In his response to Koying, Hochecker seemed open to Koying’s ideas about putting more emphasis on Android going forward. However, he also suggested that Koying picked an bad time to voice his concerns because a new version of Kodi had just come out. Koying responded sarcastically and implied that Hochecker was attempting to “rule” over Kodi.

Breaking up with Kodi

When Koying decided to break away from Kodi, he “forked” the Kodi repository on GitHub and created a new GitHub repository for SPMC.

Branching off has given Koying the ability to do what he wants to do with the source code and implement more Android-specific features and tweaks.

The large number of “commits” (approved code adjustments) and contributors on the SPMC Github gives you some idea of the huge amount of work involved in creating an open source media player.

Because SPMC inherited code from the original Kodi project, you have to scroll through its release history to discover exactly what Koying and his collaborators have done with the Kodi source.

Lots of new changes and updates

Surprisingly, Koying published the first SPMC release back in 2010. However, not much work on the project was accomplished until 2016, when Koying split away from the main Kodi team.

Interestingly, FernetMenta – the developer that Koying publicly squabbled with in the forum after he announced his departure – is one of SPMC’s major contributors. From 2009 to 2017, FernetMenta has racked up more total SPMC commits than even Koying himself.

This doesn’t necessarily mean that FernetMenta is actively helping Koying with SPMC, though. Koying may have simply copied large amounts of FernetMenta’s code over from the core Kodi GitHub.

A look into SPMC’s release history reveals more of what Koying was thinking when he broke away from the main group.

You have Nvidia Shield

If you have Nvidia Shield, SPMC is a no-brainer. As mentioned above, SPMC creator Koyling prefers Nvidia Shield and uses it to test SPMC. If you own a Nvidia Shield, you’ll likely be able to get better performance and features by switching from Kodi to SPMC.

You have an Android tablet

SPMC is not exactly mobile friendly. However, SPMC’s interface wouldn’t be as annoying on larger screens. SPMC is pared down and streamlined compared to the Kodi app, plus you can use voice recognition instead of the keyboard to enter text.

Related: How to Install Kodi on Android Mobile Phones

You’d rather talk instead of type

SPMC’s built-in voice recognition feature is awesome. Instead using SPMC’s tiny keyboard to enter in words, you can just punch the “IP” key and speak into your phone instead. SPMC uses Google’s voice recognition algorithm to understand what you’re saying, then SPMC grabs the text and enters it into the text box. This feature worked flawlessly when I tried it out on my cheapo Android phone, so it should work well on pretty much any device.

If you don’t like your current Android launcher, you can opt to use SPMC instead. In launcher mode, SPMC will pop up every time you hit the home button and your apps will appear inside SPMC.  Download the launcher version of SPMC from the SPMC website and open it up on your Android device to try it out.

SPMC vs. Kodi: My Personal Opinion

When I sat down to try out SPMC and Kodi on my Android phone, the first question on my mind was: could I use SPMC or Kodi for YouTube? My YouTube app is always buggy and tends to crash unexpectedly when I use it. I was curious to see how well the YouTube add-on would work on both players.

The second thing I wanted to determine was whether or not SPMC or Kodi would be any good for playing music. I often hook my phone up to my Onyx Studio 4 when I’m in the mood to listen to songs. Normally I just stream music through Spotify, but I don’t like my phone’s built-in equalizer. Could Kodi or SPMC provide better sound?

Both have weird interfaces

I initially expected SPMC to be very mobile friendly. But actually, SPMC is still pretty hard to use on a phone. SPMC’s default theme is a little easier to deal with compared to Kodi’s, but is still unwieldy.

SPMC’s main menu screen is a bit of an improvement over Kodi’s, though. Instead of a slew of different menus to wheel through, there’s only four.

SPMC’s deeper menus, though, contain a lot of small text. You have to squint and click around a lot to accomplish even the simplest tasks. You have to do a lot of work just to get to your add-ons, for example. I expected that SPMC would highlight add-ons in the interface, but you actually have to dig to find them.

The official Kodi app is also unnecessarily complex and full of hard-to-read text menus, but I actually like Kodi’s method of displaying add-ons better than SPMC’s.

As mentioned above, for whatever reason YouTube doesn’t work so great on my phone. After trying out the YouTube add-on on both SPMC and the mobile version of Kodi, I didn’t notice any major differences – until I discovered SPMC’s built-in voice recognition feature.

The IP button on SPMC’s keyboard triggers Google. After you’re finished talking to Google, SPMC plunks down Google’s interpretation of what you said into any text box. This feature is nice because it allows you to search for YouTube videos without having to peck at SPMC’s ridiculous miniature on-screen keyboard.

The YouTube video I watched looked pretty good on both the Kodi app and on SPMC. However, I did notice that SPMC seemed to be slightly less laggy when skipping around inside the video’s timeline.

Both are very average for music

Both the Kodi app and SPMC are sorely lacking when it comes to basic music player features. All they can do is play music files – and that’s about it.

I was hoping SPMC would have a built-in EQ, but it does not. It can’t download lyrics or album art, either. It does, however, have a slightly better interface – and a somewhat useless music visualizer feature.

I didn’t notice any differences in audio quality when I tried playing some music files via the Kodi app and SPMC.

After trying out both Kodi and SPMC on my Android phone, I don’t think that I will continue to use either of them on a regular basis. If I ever need to pull up a YouTube video on my phone, though, I plan on using SPMC instead of my YouTube app.