VPNs are for those who are concerned about their data security and privacy. If you’re an avid traveler and want to get past geo-blockings, if you use public Wi-Fi networks, or if you want to avoid hackers stealing your information, you’ll need a VPN. According to Norton, approximately 2,200 cyberattacks occur every single day, so to avoid becoming just another statistic, you’ll want to ensure your devices are protected.

iPhones are already quite secure, but they don’t make you immune to all malware and hackers. VPNs, otherwise known as virtual private networks, hide your IP address and encrypt your online traffic to prevent third parties from accessing any of your data.

When you install a VPN on your iPhone and connect to a VPN server, your data gets encrypted, keeping your information secure. But with so many VPNs to choose from, how do you know which is best for iPhones?

In this guide, we’ll cover the top VPN options for iPhone users to help you find the best one for you.

Our pick: ExpressVPN is the best VPN for iPhone

Our top choice for iPhone users when it comes to VPNs has got to be ExpressVPN. The reason why is simple: it’s quick, secure, reliable, and user-friendly—all qualities we’ve come to expect from and love about Apple products.

Sure, ExpressVPN is on the higher side when it comes to standard industry prices for VPNs, but with good reason. The software has over 23,000 reviews in Apple’s App Store, with an average review rating of 4.6 stars.

For a full breakdown of ExpressVPN, check out our full review. But for the purposes of this article, what makes it the best choice for Mac users?

What makes ExpressVPN a good option for iPhone?

1. ExpressVPN is seamlessly compatible with iPhone

It’s also ideal for travelers since you can get past geo-blocks when streaming from services like Netflix, Hulu, YouTube TV, and Prime Video.

Speed won’t be an issue with ExpressVPN. Thanks to its proprietary Lightway technology, you’ll get lightning-fast connection speed, with an added benefit: it won’t drain your battery as fast as other VPNs would.

If you’re an iPhone user, you’re definitely used to a certain level of speed and reliability. ExpressVPN will satisfy those expectations.

3. ExpressVPN has the best customer support

Got an issue? No problem. ExpressVPN’s live customer support team is at your service 24/7 through email and instant live chat. Meaning that regardless of which time zone you’re in, you’ll always be able to get support when you need it.

Want to try out ExpressVPN with no strings attached? Take advantage of their 30-day money-back guarantee and see if it meets your expectations.

Just because you have an iPhone doesn’t mean you’re always ready to blow the bank. For those who want a premium VPN at a discount, Surfshark is the ultimate choice. Surfshark has over 3,400 reviews in Apple’s App Store, with an average review rating of 4.8 stars.

It works great on many streamers, particularly on Netflix. Got a Macbook, too? Surfshark lets you use its software on as many devices as you like, which is incredible considering its already low cost.

Features are excellent, especially for the price point. Its zero-log policy, advanced malware protection and kill switch ensures your data is always protected. You won’t have complaints about its clean and simple interface, either. Surfshark also offers a 30-day guarantee, so you don’t have to pay a dime in the event that you don’t turn into a raving fan within the first month.

NordVPN is best for ultimate encryption

You’ve probably already heard of NordVPN. It has the most reviews out of any other VPN in this list on Apple’s App Store—49,000 reviews, with an impressive average review rating of 4.6 stars. With that many Apple users loving it, it’s hard to argue that it isn’t a top choice for iPhone users, especially since introducing Siri support.

Let’s quickly go through its best features. First of all, it lets you connect to over 5,500 different servers across 59 countries around the world, and unblocks many streamers, including Netflix, Hulu, YouTube TV, and Prime Video. You can use your subscription on up to 6 devices, which is more than ExpressVPN, but less than Surfshark.

Now, let’s talk security. NordVPN’s privacy and security features are top-notch. Its Double VPN technology encrypts your IP twice for ultimate protection. Its strict no-logs protocol is regularly audited to ensure none of your data is ever collected or shared. Its Threat Protection feature blocks intrusive ads and protects your phone from malware, and two kill switches add another layer of security.

It has the same 30-day money-back guarantee as the other VPNs on this list, so you can try it risk-free.

Related: ExpressVPN Vs. NordVPN - 7 Things You Need to Know

Affordable yet feature-packed, Private Internet Access (PIA) is a great choice for iPhone users, on account of price, security, and most importantly, ability to stream. Apple users seem to love it too, with an average score of 4.6 stars from over 6,500 reviews in Apple’s App Store.

With PIA, you can access a whopping 30,000+ servers across 84 countries, which includes all 50 US states. This makes it an excellent option for streaming, especially since it unblocks content from all the major streaming services.

Security is on point, with a strict no-logs policy, built-in ad blocking, and the ultra-secure Wireguard encryption protocol. It also offers a ton of great features that iPhone users would love, including the ability to add Siri shortcuts, and save the most commonly used servers to your favorites.

In general, we don’t recommend that you opt for a free VPN over a paid one, and here’s why.

You generally won’t get the protection that you would get with a paid VPN, which is one of the main points of having a VPN in the first place.

But if you are going to opt for a free VPN, we highly recommend that you don’t just download the first one you find. You have to do a ton of research since there are risks that some could leave you vulnerable to cyberattacks or even sell your data.

In case you’re in the market for a free VPN, check out one of the two credible and trusted ones we’ve recommended below.

Proton VPN is a safe and solid overall choice if you’re looking for a free VPN. Subsidized by Proton VPN’s paid users, you won’t have to worry about your data being sold or unwarranted cyberattacks. It has a slick and user-friendly iOS app for macOS, which has over 900 reviews in Apple’s App Store, with an average review rating of 4.3 stars. 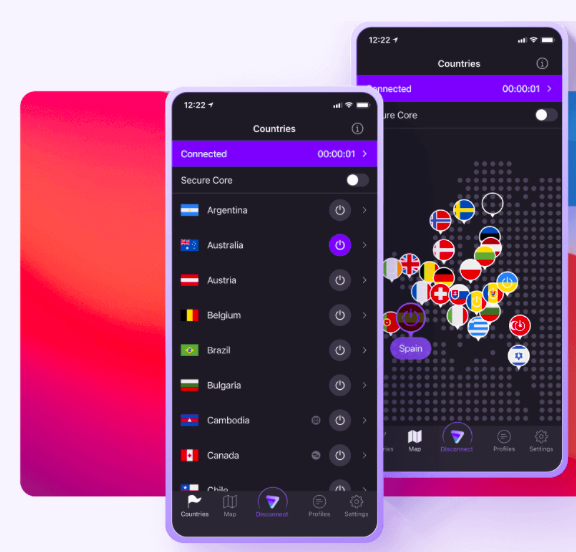 What’s the catch? You can only access 3 servers based in the Netherlands, Japan, and the US.

But the fact that Proton VPN offers unlimited data, which is incredibly rare among free VPNs, could make up for that tiny downfall—it depends on your needs.

Privado VPN is the best VPN for streaming

Here’s the thing with free VPNs: they’re not really made for streaming. So if you are looking to stream using a free VPN, your best option is Privado VPN. However, keep in mind that you can only really use it for Netflix and Disney+, at this time.

Privado VPN has a maximum data limit of 10GB, which restarts every 30 days. One great thing about the free Privado VPN, though, is that it offers the same security features as its paid plan. This includes full end-to-end encryption, IP masking, and a kill switch, so your data is always kept safe and secure.

Setting up a VPN on an iPhone should be quick and hassle-free. Just sign up for your VPN of choice, download the app on your iPhone, and get connected.

Here are the steps:

Do iPhones have VPNs built in?

The short answer is no, iPhones do not have VPNs built in. However, they do allow you to connect to VPN servers through your iPhone’s Settings.