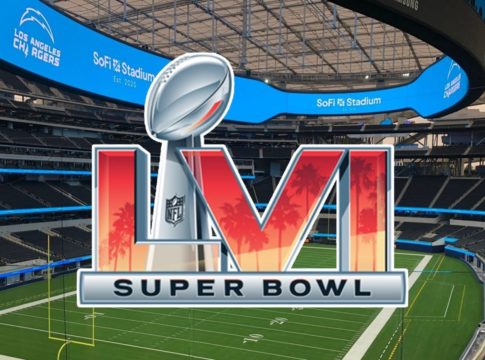 On February 13, the top two teams will duke it out in the 56th ever Super Bowl. The Super Bowl LVI will stream on NBC.

If you’ve already cut the cord, you can watch it by purchasing an OTA antenna, or through any of these streaming services: Sling TV, Peacock, Hulu + Live TV, YouTube TV, DirecTV Stream and fuboTV.

Our Recommendation: Watch the 2022 Super Bowl LVI on NBC using an OTA Antenna and Sling TV

If you have a cable subscription, you can watch the 2022 Super Bowl for free on NBC. But even if you’ve cut the cord, you can watch NBC and other local stations for free with an OTA antenna. But if you’ve cut the cord and want more than just local stations, we recommend checking out the Sling prepay deal. Get a free HD antenna ($45 value) when you prepay for Sling. Unlike cable companies and other live TV streaming solutions, Sling does not charge for local channels but instead are committed to finding the most cost-effective way for viewers to access local channels.

NBC.com and the NBC App

Why do this? Mainly because it lets you get around some of the more restrictive simultaneous streaming policies. For example, even though Sling Orange only lets you stream on 1 device, you can still watch NBC content on the NBC app if another person is already using your Sling TV account.

If you want an easy and affordable streaming service that’ll give you keep you entertained with a few solid channels, Peacock is a great option.

You can watch the 2022 Super Bowl with the Peacock Premium plan that, while still ad-supported, unlocks all of Peacock’s content for $5 per month. The Peacock Premium+ plan removes most advertising for an extra $5 monthly fee. Learn more here.

Peacock is owned by NBCUniversal so it gets its content from the NBC broadcast, sports and news channels. You get 28+ channels including Hell’s Kitchen, Fallon Tonight, Sky News, CNBC Make It and more.

You can watch YouTube TV on pretty much any modern streaming device. That includes iOS and Android devices, web browsers, Apple TV, Roku, Chromecast, and Android TV, as well as some smart TVs and PlayStation 5. Learn more here.

You can stream on up to 3 devices simultaneously with Peacock.

As of now, Peacock does not offer any DVR.

You’ll find movies produced by Universal Pictures and its various movie studios over the past century in Peacock’s content library. Learn more here.

You can watch Super Bowl LVI on NBC using Hulu + Live TV. Hulu + Live TV also added NFL Network in early 2021, and it’s a great cable alternative for NFL fans thanks to its large lineup of channels and good overall set of features.

You’ve only got a single package of channels to choose from. Hulu + Live TV costs $64.99/month, and gives you about 75 channels depending on your location. Learn more here.

As mentioned, you get a total of 75+ channels with Hulu + Live TV. This includes NFL Network, as well as ESPN, Fox Sports, and local broadcast networks like ABC, CBS, FOX, and NBC. You’ll get a great lineup of sports, entertainment, news, and lifestyle channels. Learn more here.

You can stream Hulu + Live TV on pretty much any modern device. This includes web browsers, iOS and Android, Amazon Fire devices, Apple TV, Roku, and Chromecast. You can also watch on a few smart TVs, as well as Nintendo Switch, PlayStation, and Xbox gaming consoles. Learn more here.

You can watch Hulu + Live TV on 2 devices at once by default. If that’s not enough, a $9.99/month Unlimited Screens upgrade is available. This lets you watch on unlimited devices on your home network, and on up to 2 devices outside your home network. Learn more here.

The Hulu + Live TV DVR lets you record 50 hours of content by default. The Enhanced DVR package costs $9.99/month and boosts this to 200 hours. You can combine Enhanced DVR + Unlimited Screens for $14.99/month. Learn more here.

One great thing about Hulu + Live TV is that it comes with a free Hulu on-demand subscription. This unlocks tens of thousands of hours of TV shows, movies, and other content, including critically-acclaimed Hulu Originals like The Handmaid’s Tale. Learn more here.

If you want to watch the Super Bowl without cable, YouTube TV is a great all-around choice. It’s reasonably priced, includes lots of top channels, and has some nice-to-have features like an unlimited DVR.

YouTube TV keeps things simple. There’s only one $64.99/month package to choose from, along with a few premium add-ons. You’ll be able to watch NFL Network without cable using its base-tier subscription. Learn more here.

You can watch YouTube TV on pretty much any modern streaming device. That includes iOS and Android devices, web browsers, Amazon Fire TV, Roku, Chromecast, and Apple TV, as well as some smart TVs and Xbox consoles. Learn more here.

With YouTube TV, you can watch on up to 3 devices at once. There is no option to add more streams, but this should be plenty for most cord-cutters. Learn more here.

The YouTube TV DVR is one of its standout features. You can record unlimited content for up to 9 months with this DVR. If you record a lot of content to watch it later, YouTube TV is probably your best option. Learn more here.

The YouTube TV on-demand library consists of shows, movies, and past seasons obtained from the various channels included in your package, including NFL Network when applicable. Since you’ve got 85+ channels, there will be plenty to watch, though the available content tends to change quite a bit. Learn more here.

DirecTV Stream has improved its features and offers a large selection of channels, this streaming service is the most expensive option on the market. If you enjoy premium channels like Starz, Showtime and HBO Max and appreciate unlimited DVR, DirecTV Stream is a great option for you.

NBC and other local stations are part of every subscription plan as is ESPN. You won’t have to get the more expensive plans to watch football.

Each plan offers a unique combination of channels. You’ll need to check the full listing to be sure you pick the right one. You can get NBC with any of the four plans. Learn more about DirecTV Stream’s channel lineup here.

You can watch using 3 devices at once with DirecTV Stream. If you sign up for the Premium plan, you can stream on up to 20 devices connected to your home network. Learn more about simultaneous streaming on DirecTV Stream here.

The cloud DVR offers unlimited DVR, but people who subscribed in 2019 may only save twenty hours of content unless they switch to the new plans. Learn more about DirecTV Stream’s DVR feature here.

The on-demand library contains content provided by each of the channels.

If what you’re looking for is comprehensive, unbeatable sports coverage, it’s hard to do better than fuboTV.

A base-tier fubo Starter subscription costs $64.99 per month and gives you access to up to 80+ channels, depending on your location. Learn more here.

App support is pretty good for fuboTV. You can access fuboTV in your web browser, or on your iOS/Android smartphone or tablet. Streaming devices such as Roku, Amazon Fire TV, Chromecast and Apple TV are also supported, as is Android TV. Learn more here.

fuboTV lets you stream on 3 devices at once. You can pay $9.99/month or upgrade to a higher-tier plan to watch on up to 10 devices at once on your home network. Learn more here.

fuboTV gives you 250 hours of cloud DVR space by default. If you need more space, you can pay $16.99/month or subscribe to a higher-tier plan for 1,000 hours of DVR capacity. Learn more here.

fuboTV has plenty of on-demand content from the channels it carries, including NFL Network and most other sports channels, as well as top entertainment channels like FX. You can get more details about the fuboTV on-demand library here.