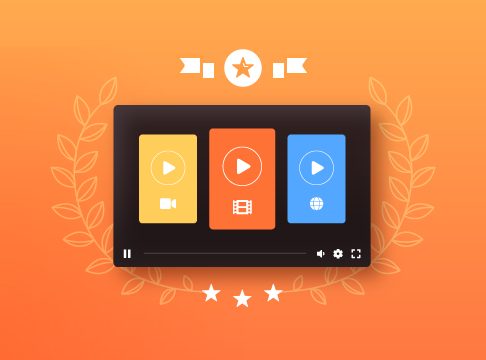 We now spend up to six hours each day, on average, watching videos (either via live TV, streaming services, movie players, computers, or apps), but how satisfied are we with the experience, really? Are there certain streaming platforms and programs that excel in making this TV time the best it could possibly be, or do today’s most popular streaming services fall short?

Hosting premier experts in streaming service research, Flixed was determined to figure out which features and experiences mattered most to Americans today, and which platforms were best serving each of those needs. We surveyed 1,000 people who used at least two of today’s most popular streaming services (Netflix, Disney+, Amazon Prime Video, Hulu, YouTube TV, HBO Now, ESPN+, Apple TV, The Roku Channel, and Sling TV) to create the ultimate meta-ranking based on highly experienced user feedback. Continue reading to see what reviewers all across the country had to say. 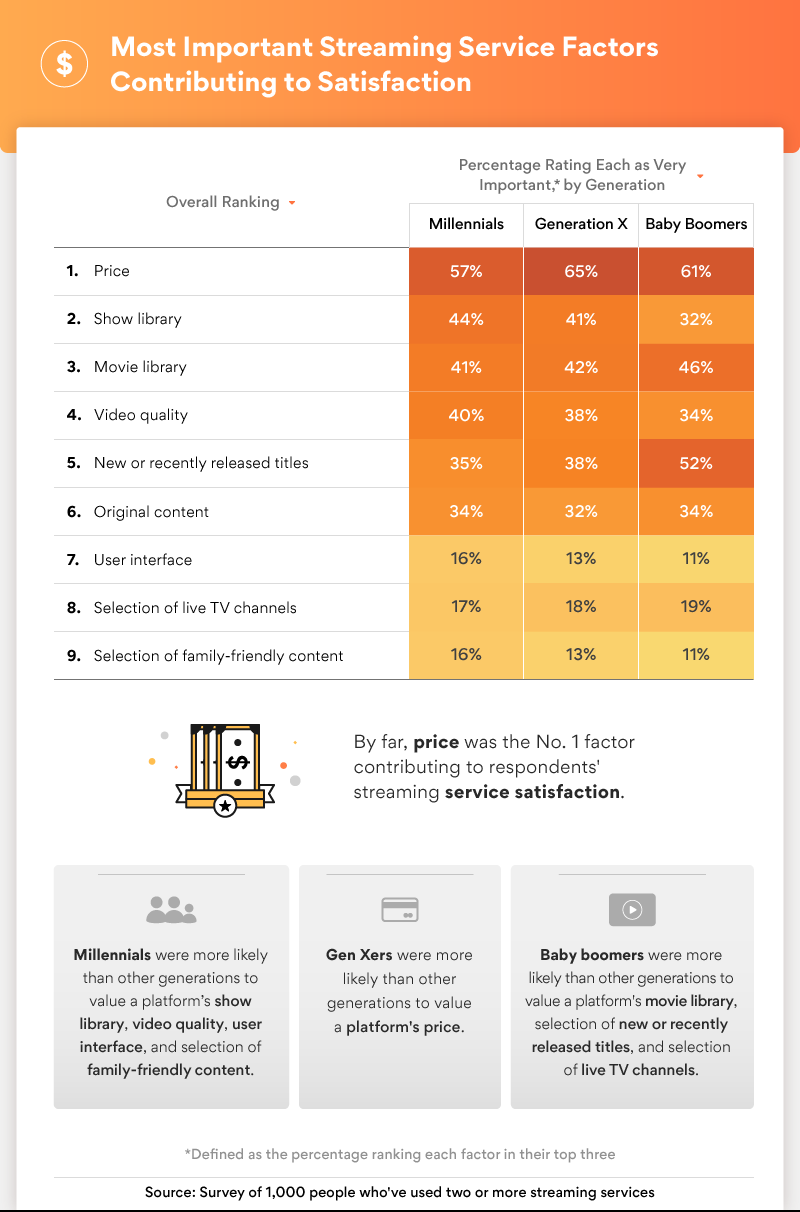 To kick things off, we asked each participant to rate what was most important to them in a streaming service. Cost was by far the No. 1 catalyst of customer satisfaction, followed by the show library and the movie selection. And though cost was the most important to everyone, it was disproportionately important to our Gen X respondents. Cost may matter most to this group, however, because the burden of payment is typically falling on this group the most: Gen Xers represent the highest percentage of account holders.

Millennials, who represented the second-largest group of streamers, were the most likely of all the generations to value a platform’s show library, video quality, user interface, and selection of family-friendly content. And baby boomers, the smallest user demographic of streaming services, most wanted a solid movie selection, live TV channels and new or recently released titles.

How Streaming Services Stack Up 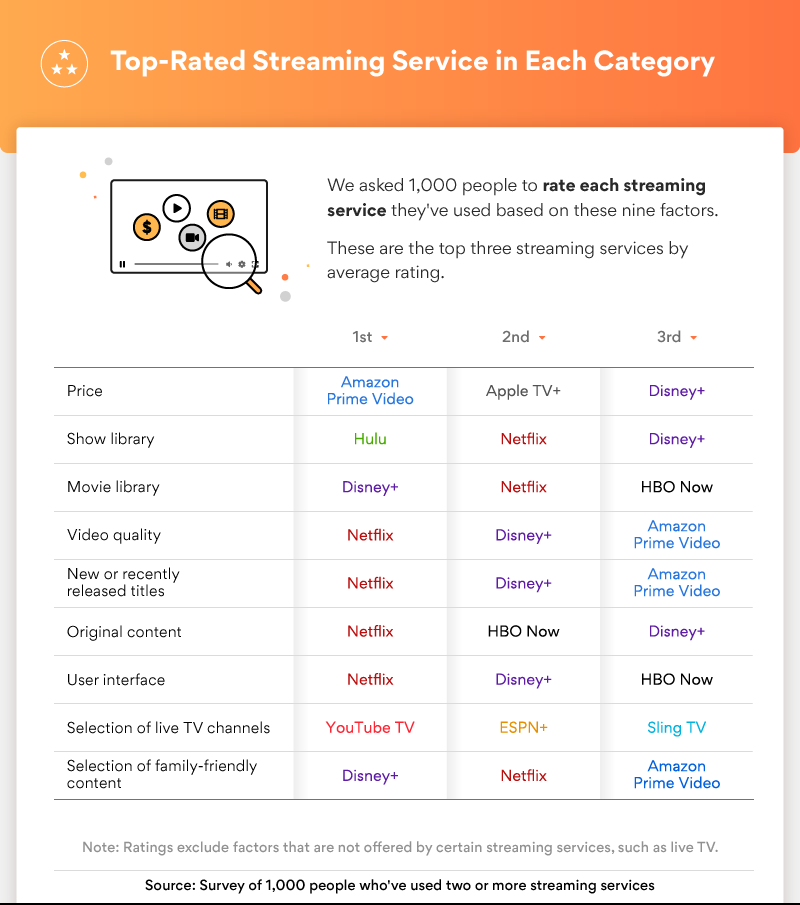 When it came to cost, Amazon Prime Video was the winner across all respondents. This may well be a result of its cost being included in the Amazon Prime membership, which also includes a host of other functionalities.

Hulu was the winning platform for its show selection. Unlike Netflix and Amazon Prime, Hulu’s emphasis has always been on television, with its celebrity endorsements using the sarcastic catchphrase, “We’re about to ruin TV for you.” Hulu commercials also drive home a heavy emphasis on live sports offerings. Hulu’s recorded shows are also incredibly popular and long-running (e.g., “Grey’s Anatomy” and “Law & Order”).

We can also guess why Disney+ won for the movie selection category. In spite of its relatively recent launch, the platform has picked up historic blockbusters like those from the Marvel Cinematic Universe, Pixar’s animated movies, and the “Star Wars” series, all of which are some of the highest-grossing film franchises of all time.

Netflix, however, ultimately claimed the most accolades of any platform, taking first place for everything from video quality to new title selection, user interface, and original content. 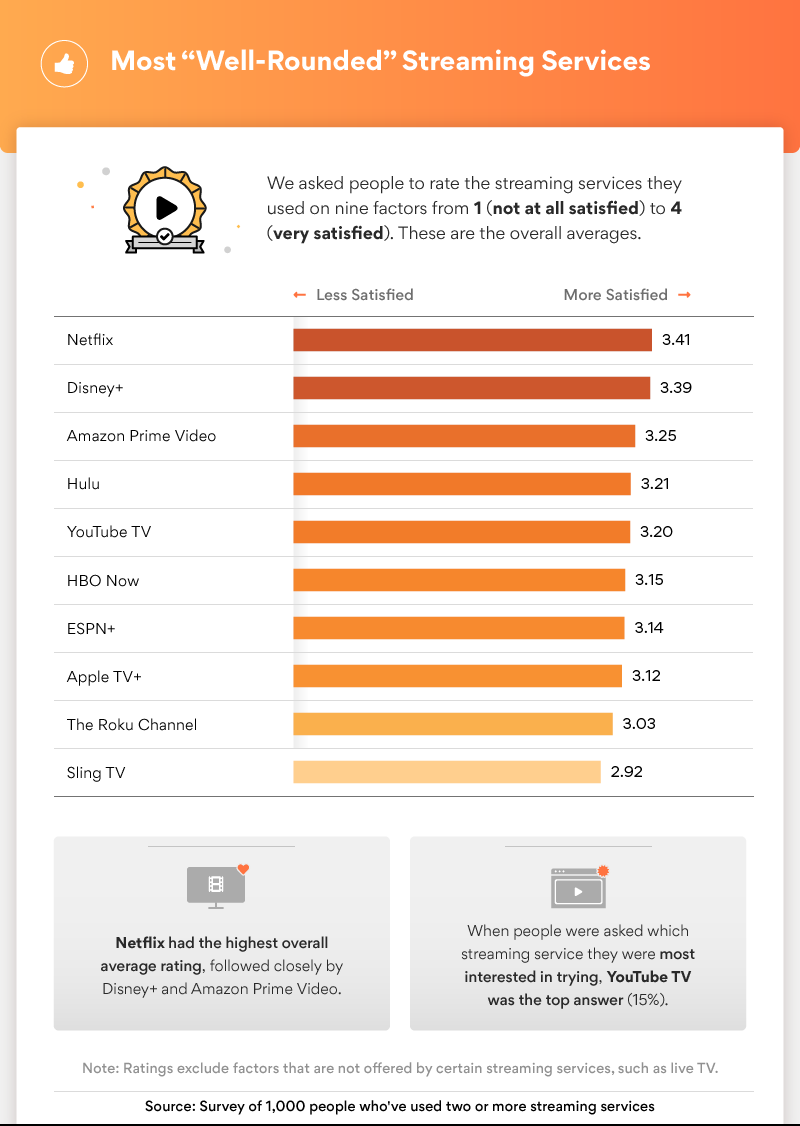 When all streaming angles of importance were combined into one average meta-score, Netflix and Disney+ rose up as the clear crowd favorites. Netflix was No. 1, achieving an average 3.41 satisfaction rating on a scale of 1 to 4, but Disney+ was incredibly close behind with a 3.39 rating across all factors.

When asked which streaming platforms people were most curious to try, however, we heard a new name: YouTube TV. Owned by Google, YouTube TV presents a very unique offering in the streaming industry. The price is fairly steep, with an all-in cost of $65 per month, yet this higher cost reflects much of what Google has done to set its streaming service apart from the crowd. Its most notable differentiation is its unlimited, cloud-based DVR, as well as its particular perks for PlayStation 4 users: YouTube TV is now the only live TV streaming alternative to Sony’s PS Vue on the console. It’s also one of the only live streaming services with PBS stations, and it includes over 70 cable and broadcast channels that you can tune into with a TV streaming guide. 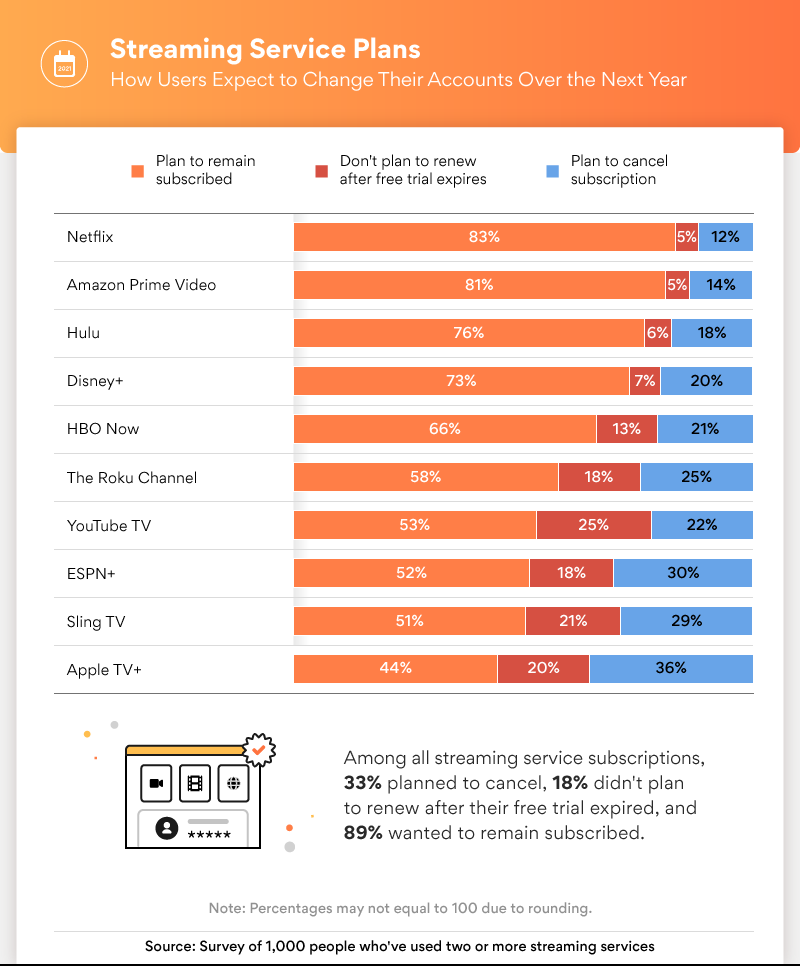 As much as these services excelled in entertaining respondents over the years, no platform was immune to having at least a few people considering cancellation. Recall that cost was the most influential factor for participants, and none of these services are free. That said, the vast majority planned to stay subscribed to their beloved Netflix accounts: 83% were absolutely certain that they would stay subscribed over the next year.

YouTube TV, which offers a two-week free trial followed by a relatively high monthly price, had the highest percentage of participants (25%) planning to cancel immediately after the trial was up. Apple TV, however, had a higher percentage of users wanting to flat-out cancel altogether. Apple TV costs just $4.99 per month, can be shared among six users, and can even come with a free year subscription after purchasing some Apple products, but respondents were disappointed. Perhaps the explanation, in the words of Business Insider, is that “Apple has made no mention of licensing any TV shows or movies for its new service. It’s all original content.”

The data ultimately revealed a lasting reverence for today’s streaming services. Respondents enjoyed various platforms for a few key strengths: Netflix overall, Amazon Prime Video for its cost, Hulu for shows, and Disney+ for movies, and most were not planning to cancel these subscriptions any time soon.

At Flixed, our mission is simple: to make your life simple, too. We’d love for you to enjoy the great and varied world of streaming without having to make the mistakes of a first-time user. Your individual needs deserve to be met. Head to Flixed.io to get help cutting the cord on an expensive, outdated cable subscription and get ready to stream!

Rankings were limited to streaming platforms with 100 or more users. In specific instances where a streaming service did not offer a certain feature (such as live TV), respondents were not asked to rate their satisfaction.


The data we are presenting relies on self report and as such, is susceptible to selective memory or exaggeration. It is possible that with a greater sample size of platforms, we could have gained more insight into these services.

Beyond streaming, the internet can support a more important kind of connection: knowledge sharing between family and friends. In that spirit, please feel free to share this content with anyone who might enjoy it or even use the information to spare themselves from a hassle. When you do, please link back to this page so others may have the opportunity to explore the full project, and please only cite our work for noncommercial purposes.