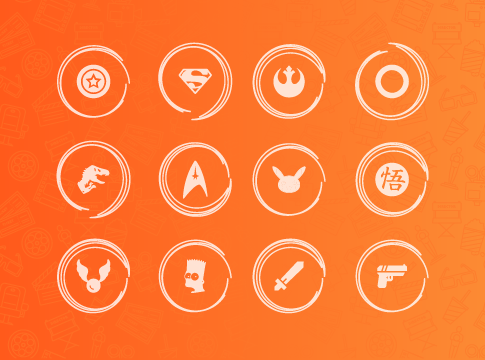 Before the onset of cable television, the loyalty of viewers to broadcasters was taken mostly as a manifestation of brand preference that treated differences in programming as somewhat incidental. The choice of a viewer to switch on ABC instead of CBS may have had something to do with their liking Diff’rent Strokes more than The Jefferson, but it could just as well have been because they had grown up in a household that tuned into Peter Jennings on ABC World News Tonight rather than Walter Cronkite’s CBS Evening News. Cable exploded those conventions by fragmenting the television audience into constituencies with finely grained programming preferences—preferences, that, with time, have been winnowed anew into a set of franchises that have risen to dominance in the streaming age.

While the notion of a “CBS household” seems bizarre today, advertisers nevertheless are grabbing every meeting they can to negotiate deals with Disney to get their products in front of Marvel fans. Contrary to the received wisdom that the digital age is synonymous with infinite choice, the past decade instead saw the media environment reconsolidate, with two forces holding sway. On one hand, there’s the content itself, which is increasingly oriented around a handful of franchises with a proven track record, and on the other the paltry number of owners of the rights to make that content. The question going forward is which of the few mammoth programmers that are left can manage to acquire a mix of content for their streaming services that will prove irresistible to rabid fans.

Marvel is most popular cinematic universe, followed by Star Wars and Harry Potter 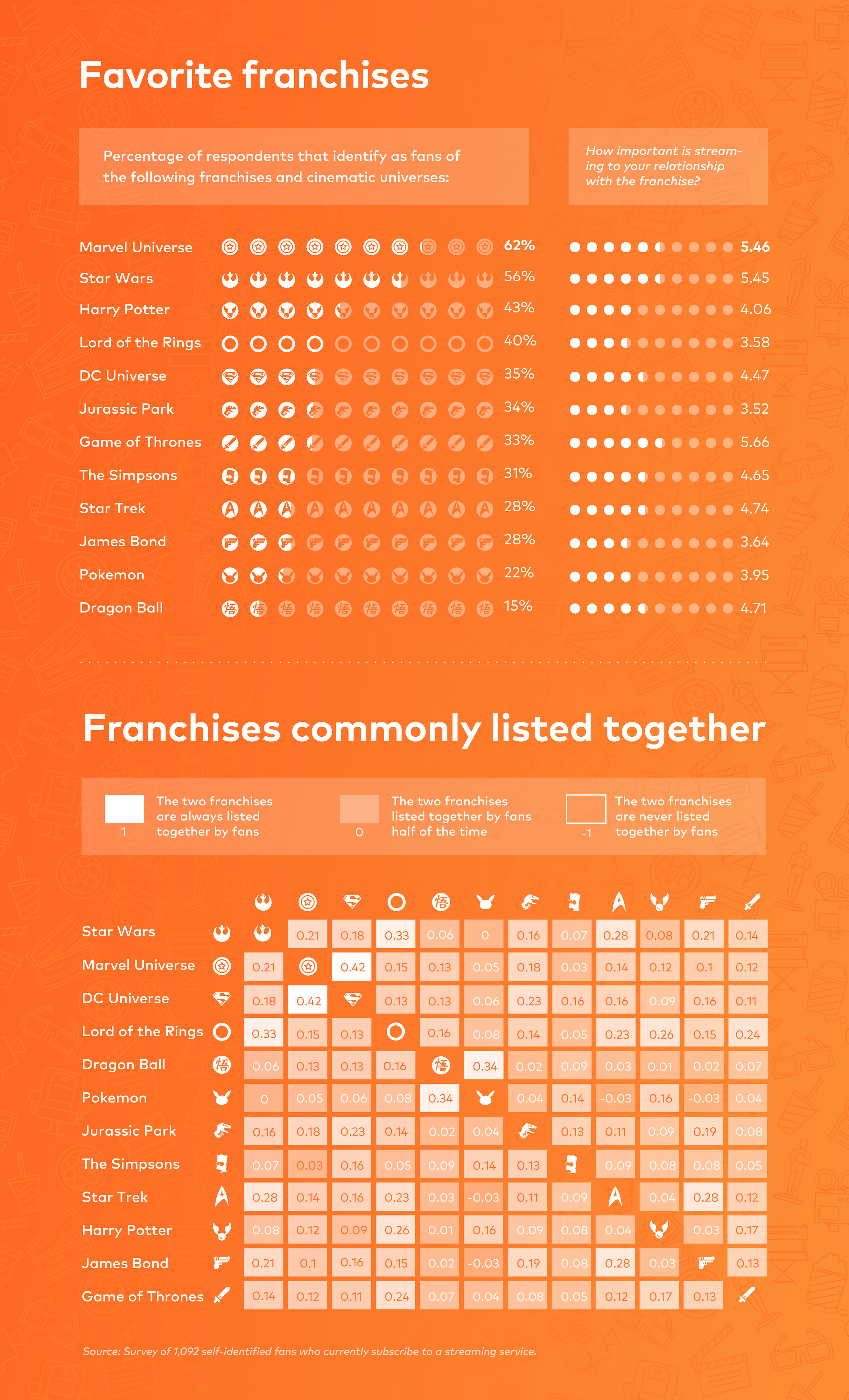 Disney has an enormous leg up on its rivals when it comes to redirecting existing fandoms into Disney+ viewers. Its pair of gilded properties—Marvel and Star Wars—are not only the most popular franchises around, but also the two with the most recent track record of sustained box office success. Today, no other media conglomerate comes close, with CBS struggling to convert impassioned Star Trek fans into All Access Subscribers (perhaps because it’s mostly change-averse Boomers who they’re targeting) and the rights to watch the likes of Dragon Ball Z and Pokemon split up between Netflix and Hulu.

That Netflix only marginally benefits from the just-add-water audience fandoms represent is striking. That service’s ability to emerge as the dominant alternative to broadcast and cable television with only limited aid from any franchise, in particular, speaks to the primacy advantage it enjoyed over the course of the last decade by not only being the first service to stream television and movies on a grand scale, but also the first to produce its own content. What’s unknown is how sustainable that success will be once the decision point comes for many of its customers about whether or not the vast sea of fairly anonymous content it offers is worth the same price as a service like Disney+ that offers a couple key franchises they strongly identify with.

Gen Zers would pay the most to stream franchise content 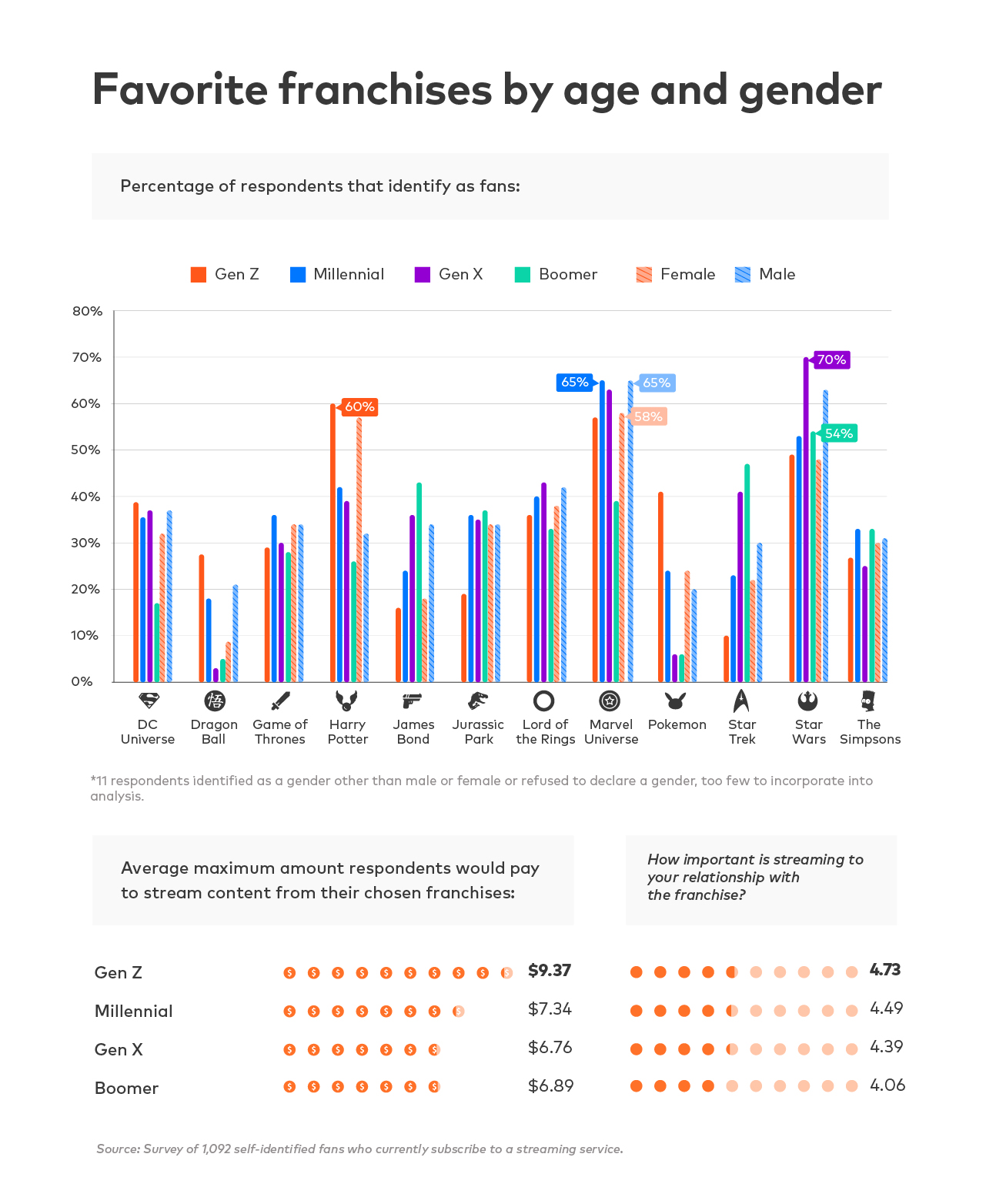 For all of Disney’s advantages in the race to catch Netflix, it should still keep an eye over its shoulder: when HBO Max launches this spring, it will do so with the help of a number of smaller franchises—not just Game of Thrones, but Harry Potter, Jurassic Park, and DC. The combined audience of those properties may not rival what Disney can hope to reach with Marvel and Star Wars, but the importance those fans put on being able to stream their favorite shows and movies seems to suggest that it will have little trouble signing up new subscribers when it does. Especially given that Harry Potter’s fandom skews younger than that of any other franchise, a big opportunity exists for HBO Max to be the go-to choice for the consumers who are only now beginning to enter the marketplace (and the ones who are far and away the most likely to prefer streaming over broadcast or cable). If they ever get their hands on Pokemon and Dragon Ball Z—watch out.

Whatever upside HBO Max might see in appealing to those potential future subscribers, Disney’s core audience is already signing on the dotted line. Star Wars and Marvel are the franchises favored by Millennials and Gen Xers, the groups with both the inclination to subscribe to a streaming service and the resources to pay a monthly bill. Still, none of these services has managed to become a one-stop-shop for all the franchises that any given viewer may hope to stream. Sure, there’s obvious overlap between Marvel and DC fans and those who enjoy both Star Wars and Star Trek, but that’s not all. Perhaps because of their advanced age, Star Trek fans are also likely to enjoy James Bond; Lord of the Rings fans like not just Harry Potter, but also Star Wars. The cleaving of these fandoms together may provide grist for media executives trying to sell their boards on a big bid for the rights to James Bond, but by and large these franchises have already been divvied up, resulting in a state of affairs where most fans are compelled to subscribe to two or three of these services to get access to all the content they enjoy.

Marvel fans stream the most and would pay the most, but Gen Z male Game of Thrones fans are the most lucrative niche market 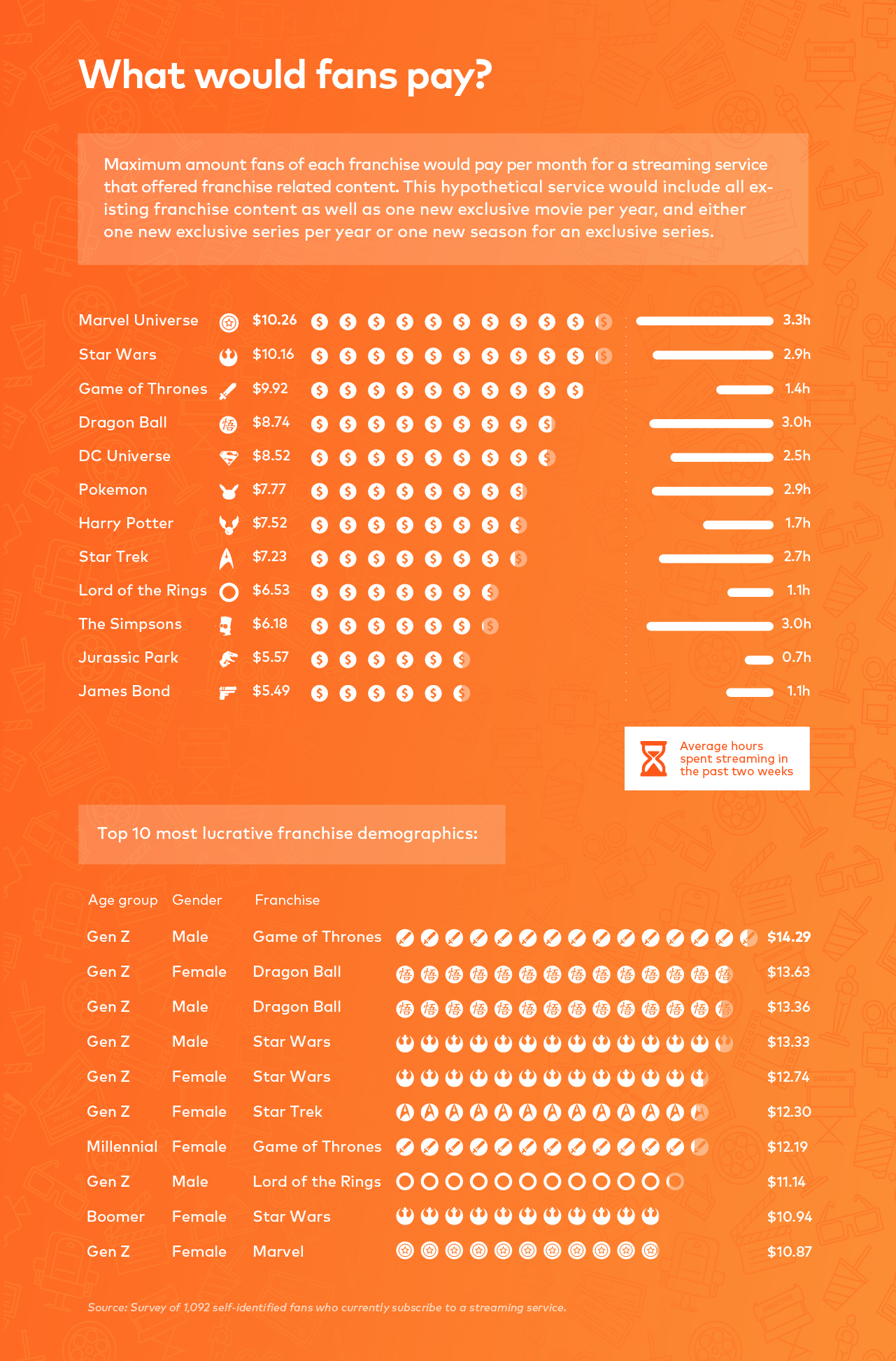 HBO Max’s starting subscription price will be $15 per month—that’s on par with the pricing for Netflix’s standard plan, but more than twice what Disney+ is charging. Disney’s choice to lowball the competition seems like an attempt to build a massive subscriber base quickly, but it will inevitably rise, especially given that the audience for its key franchises is already willing to cough up more to get unlimited access to Star Wars and Marvel. And that’s not even accounting for Hulu, Amazon, CBS All Access, or Apple TV+. Will the Millenials and Gen-Zers driving the streaming revolution—the ones who have never had a cord to cut in the first place—be willing to pay well over $50 a month for a variety of streaming services in order to get access to each and every franchise they enjoy? Netflix seems to be betting on the 20th Century model the broadcast networks pioneered: that its users are so used to its tone and rhythms that they’ll stick around, regardless of what content they’re actually able to stream. 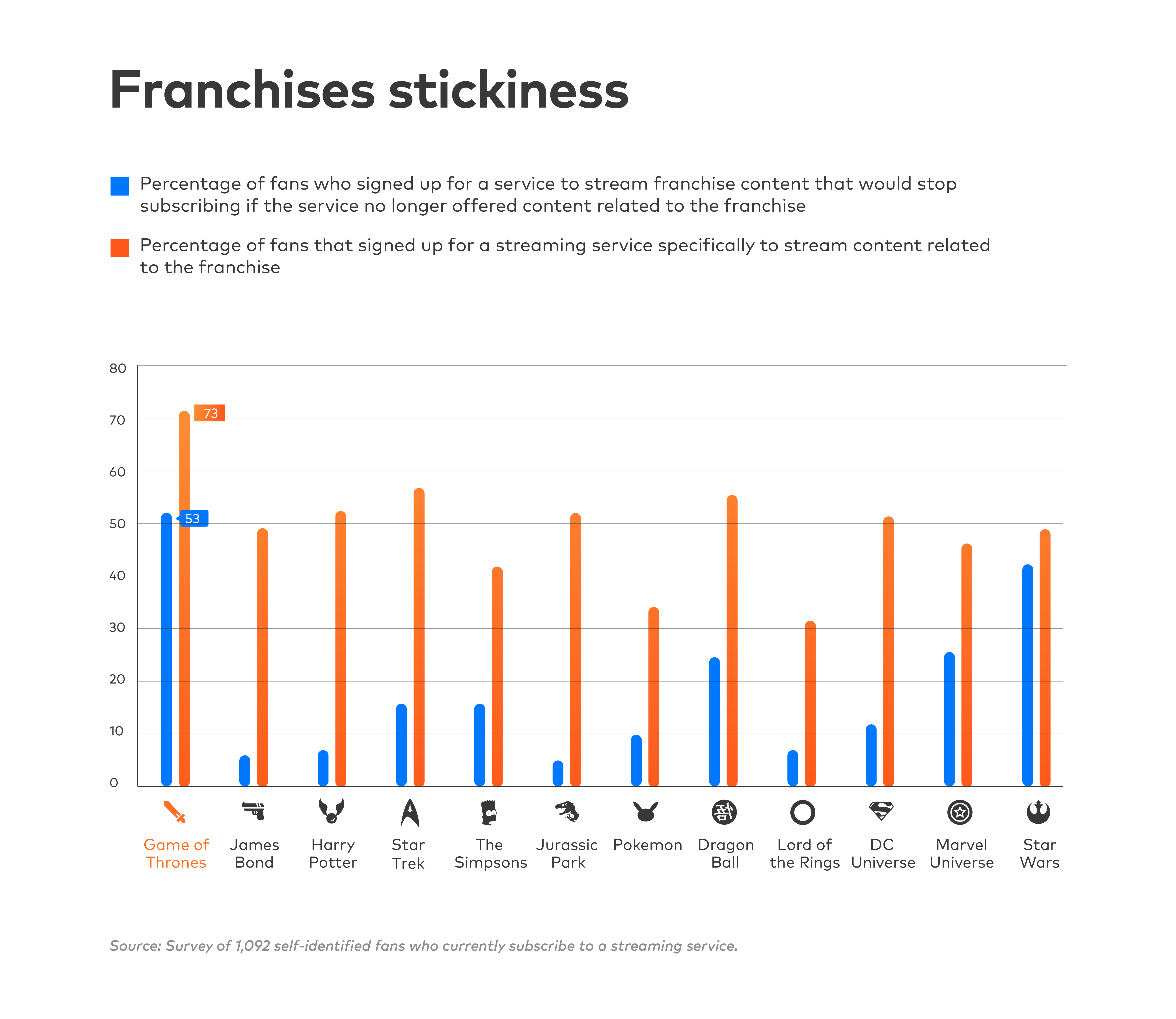 This strategy seems totally blind to the viewing habits that are showcased in this study. Even if only a tiny fraction of viewers have signed up to HBO’s current streaming service specifically to watch Game of Thrones, those viewers represent the fandom most willing to cancel the service if Thrones disappeared. Once those shows disappear off the TV streaming guide, these fans lose all interest in the service.

For all the reconsolidation of the media industry over the past decade, viewers remain loyal to franchises first and streaming services second. The days when a kid who grew up watching CBS will just keep watching without changing the channel are long gone. Once subscriptions rates start their inevitable rise, it’s hard to imagine that Netflix’s library of derivative content won’t be the easiest app to part with for the 20-something whose identity is shaped by their adoration of Star Wars, Harry Potter, and Dragon Ball Z.

The largest fandoms were identified with a preliminary survey of 1,000 people which were then compiled into a list presented in a full 1,092-person survey. The survey, of respondents who were at least 18-years of age and based in the United States, was conducted between January 14-23, 2020.