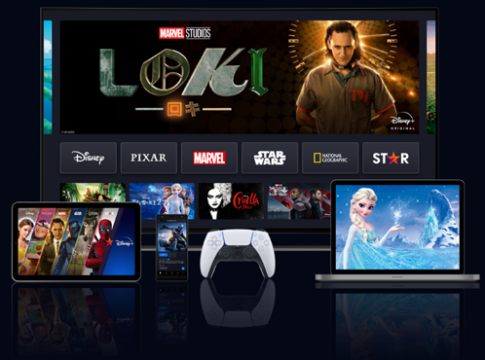 Disney+ launched in 2019 as a streaming platform for shows and films by Disney, Pixar, Marvel, Star Wars, National Geographic, and more. But is a Disney+ DVR included in your subscription? And is it possible to download Disney+ content to watch later?

In this article, we’ll fill you in on all you need to know about Disney+ DVR and offline viewing.

Does Disney+ come with a cloud DVR?

At the moment, Disney+ does not offer any kind of DVR service. But keep in mind that Disney+ currently offers all its content on-demand, so the lack of a DVR won’t affect how you watch it. Since it does not air live content, there isn’t a need for the DVR feature. Granted, this may change in the future, depending on how the Disney+ service evolves.

What’s in the Disney+ on-demand library?

There are over 1,300 movies and TV shows, and 80 Disney+ originals available on Disney+.

For Disney lovers, Disney+ is a dream come true. Nearly every Disney movie, TV show, cartoon, and documentary you can think of can be found on the streaming service. Movies that were previously kept in the “Disney Vault” are now available to stream, including classics like The Lion King, Bambi, and Cinderella, so there’s no need to dust off those old VHS tapes.

Disney+ is also home to original content that is only available on the streaming service, like The Mandalorian and behind-the-scenes Disney documentaries like Behind the Attraction and One Day at Disney.

On the off chance you’re unfamiliar with Disney’s library, take a look at our picks for the best movies and shows to watch on Disney+ to get an idea of what the streaming service offers.

Disney+ lets you download shows and movies. You or any other member of the family can then watch this content, later on, offline, on any compatible device of your choosing. And unlike most other streaming services, you don’t need to pay an extra fee. So, how can you do it?

Step 1: Make sure you’re logged into the Disney+ app on your device. Find a movie or show that you want to download by looking on the app’s home screen or using the search function.

Step 2: Select the movie or show once you locate it in the app.

Step 3: Navigate and click the “Download” button. It looks like an arrow pointing down at a flat line and will be right next to the “Play” and “Add To Watchlist” buttons.

Step 4: Once the icon turns into a square, your content will begin downloading.

Step 5: Explore all of your content in the “Downloads” tab located in the bottom menu. Enjoy your Disney+ download!

On how many devices can I store downloads with Disney+?

Disney+ allows you to store downloaded content on up to 10 devices at a time. Downloading content is also a great idea if you plan on going over the 4 simultaneous streams that your subscription allows, as watching offline content doesn’t count toward the streams.

How much does Disney+ cost?

A subscription to Disney+ comes at a very affordable price. You can also pay annually and get a discount that works out to be about 2 months free over the course of a year.

On March 4 2022, Disney announced that they are going to roll out a cheaper, ad-supported model. However, it’s going to be cheaper in relation to the new ad-free tier they’re introducing. The new ad-supported plan will cost the same as the current single-tier plan, and the ad-free tier will cost a few bucks more per month.

Disney+ is compatible with most devices, so you shouldn’t have trouble watching downloaded content on your device of choice. Tablets and smartphones running Android will work with the Disney+ app as will devices based on Chromecast. You’ll also find the Disney+ app for iPhones, iPads and iPod Touch.

If you prefer streaming to your TV through a separate device, Disney+ has you covered. Amazon Fire TV sticks, Roku sticks and the Apple TV are all supported.

Among the various game consoles, Disney+ focused on supporting the current and next-generation Xbox and PlayStation.

Read more about Disney+ supported devices to see which of your devices are compatible.

Can I cancel Disney+ at any time?

Yes! And there is no cancellation fee. When you cancel your subscription, you will have until the end of your current billing cycle to continue watching content on Disney+.

Unfortunately, no. While all Disney cable channel content is on Disney+ (i.e. Disney Junior, Disney Channel, Disney XD), the channels are not available to watch in real-time.

If you sign up for Disney+ before December, you’ll be able to lock in the current price and get all the content ad-free. But after December 8, that going to change. Disney announced it is increasing prices and introducing an ad-supported tier that costs the same as the current single-tier service offered now (which doesn’t have ads).

You can also see how Disney+ compares to other streaming services in Flixed comparisons like Disney+ vs Netflix, Disney+ vs HBO, and Disney+ vs Apple TV+.