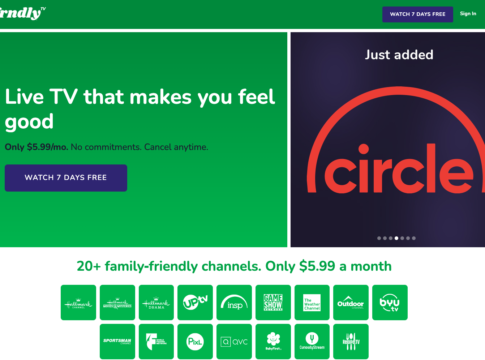 If you’re looking to switch from Frndly TV to an alternative streaming service, it’s likely because the channel lineup with Frndly TV just isn’t cutting it anymore. Frndly TV offers a modest lineup of 20+ channels, with the most popular being the Hallmark Channel, the Weather Channel, and the Game Show Network (GSN).

Frndly TV is a good option if your budget is tight, but if you’re ready to level up to a more expensive, but more comprehensive streaming service, we’ve compiled a list of the best Frndly TV alternatives.

Frndly TV is a popular streaming service for folks who are on a budget and love the Hallmark Channel. Philo is a great choice in both categories. It has most of the channels you loved on Frndly TV, at a price tag that won’t break the bank, $25/month.

One of the reasons that Philo is a great alternative to Frndly TV is the fact that it carries most of the popular channels you got with Frndly TV, plus a lot more. Philo has three Hallmark channels and the Game Show Network (GSN), along with other channels like A&E, MTV, HGTV, Lifetime, TLC, AMC, and the Food Network. In all, Philo offers over 60 channels. You can see the full list here.

On a per-channel basis, Philo is actually cheaper than Frndly TV. Friendly TV offers 22 channels as of this writing. Philo offers 63. With Frndly’s premium plan of $9.99/month, you’re paying $0.45 per channel. With Philo, you’re paying $0.39 per channel. Philo does not, however, carry all the channels you get on Frndly TV. It’s missing the Sportsman Channel, Outdoor Channel, the Weather Channel, and the World Fishing Network, among others.

There’s just the one, $25/month plan with Philo. You have the option to add on Starz and EPIX for an additional fee.

Philo’s compatible devices are very similar to Frndly TV’s. If you had no trouble streaming on Frndly with your devices, you should be able to stream on Philo. Philo works with Apple TV (4th gen and up), Amazon Fire TV, Chromecast, Roku, and Android TV.

Read more about Philo’s device support here. We always recommend you check the website for the most up-to-date information before you sign up.

You can stream on up to three devices at once, and register up to ten accounts. This is better than the Basic and Classic plans from Frndly TV, but worse than the Premium plan, which allowed for four total simultaneous streams.

Philo offers unlimited DVR recordings, and you can watch them up to a year after recording. This is better than Frndly TV’s DVR policy, which does include unlimited DVR, but only saves your recordings for three to nine months.

Philo uses the same 72-hour lookback feature as Frndly TV, in addition to over 25,000 titles to choose from on-demand. Read more about Philo’s on-demand library here.

If you’ve been a customer of Frndly TV, it’s likely that one thing you enjoyed about the service was the low cost. With plans starting at just $35/month, Sling TV is more expensive than your $5.99 Frndly subscription, but it’s way cheaper than most of the other Frndly TV alternatives.

Sling TV has three plans, and they range from offering 30 channels to over 50. Sling Orange and Sling Blue cost $35/month, but they both offer different channels. You can combine both plans with Sling Orange + Blue, which comes in at $50/month.

Sling TV doesn’t offer the Hallmark Channel on their regular plans, but you can add on the Lifestyle Extra for $6/month to get all three Hallmark channels. The Comedy extra costs another $6/month, where you can find the Game Show Network. These prices add up quickly, and even with these two additions, you’re already paying more for just those two channels than you were paying for your whole Frndly TV subscription. If the channel lineup was your favorite part of Frndly, Sling TV might not be the best Frndly TV alternative because of how they nickel-and-dime you when you stray beyond the original plans.

If you could stream Frndly TV on your devices, you can stream Sling TV on them, too. Sling TV has better device compatibility features than Frndly TV. Sling TV supports Apple TV, Amazon Fire TV, Chromecast, Roku, AirTV, as well as several smart TV’s and gaming consoles.

Read a full review of all of Sling TV’s compatible devices and device support here.

Sling TV’s simultaneous streaming policy is better than Frndly TV’s in some aspects, and the same or worse in others. With Sling Orange, you can stream on just one device at a time, which is the same as Frndly TV’s Basic plan. With Sling Blue, you can watch on three screens at once, compared to two on Frndly TV’s Classic plan, and four on their Premium plan.

All three of Sling TV’s plans come with 50 hours of recorded content. If you’re used the the unlimited DVR recording on Frndly TV’s Classic and Premium plans, this might be a bit of an adjustment to make.

Sling TV offers over 10,000 hours of on-demand content. One of Frndly TV’s most innovative features is the 72-hour lookback, where you can watch anything that aired within 72 hours on-demand. Sling TV doesn’t offer that feature, but does provide other on-demand content for your viewing pleasure.

If you’re ready to jump to a much more comprehensive channel lineup for a higher price, Vidgo is a great alternative for Frndly TV. Most people who subscribe to Frndly love the Hallmark Channel, and the Game Show Network. Vidgo has these channels and more starting at $55/month. You can get your first month for just $10.

Vidgo has the most similar channel lineup out of any other Frndly TV alternative available. It does come at a higher price point than the other two alternatives on the list, but if you subscribed to Frndly for the channels, you likely won’t be disappointed by Vidgo.

Vidgo has all three Hallmark channels, the Game Show Network, the Curiosity Channel, Insp, BYU TV, UpTV, QVC, Baby TV, and more. It doesn’t carry The Weather Channel, Outdoor Channel, Sportsman Channel, World Fishing Network, and a few more. Still, without a doubt, the channel lineup from Vidgo is the closest you’ll get to Frndly TV by a mile.

Vidgo is similar to Frndly TV in terms of compatible devices. You should be able to stream Vidgo on Roku, Amazon Fire TV, Apple TV, and some smart TVs.

You can stream on up to three devices simultaneously with Vidgo, which is similar to Frndly TV’s offerings, though one less device than Frndly’s premium plan.

Vidgo offers a 24-hour playback on most popular channels, so you can stream shows or movies you missed within 24 hours of them airing. This is less time than Frndly’s 72-hour playback option, but it is a similar feature otherwise. Unfortunately, Vidgo does not provide DVR, which is a considerable difference from Frndly TV’s unlimited DVR offering.

At this time, Vidgo doesn’t have any content that you can watch on-demand. It’s just a live TV streaming service. Frdnly TV claims to have some on-demand content, but it’s not clear how much, so this may or may not be a dealbreaker for Frndly TV subscribers.

We covered the three services that we consider to be the most similar to what you get with Frndly TV. If none of these plans strike you, you might consider checking out these other Frndly TV alternatives.

fuboTV is a great streaming service with the Hallmark channel, Game Show Network, and dozens of other popular channels starting at $64.99/month. You can read our full review of fuboTV here.

DirecTV Stream is a more expensive option in the streaming realm, but it does feature the popular Frndly TV channels Hallmark and GSN. Plans start at $69.99/month, and you can read our full review here.