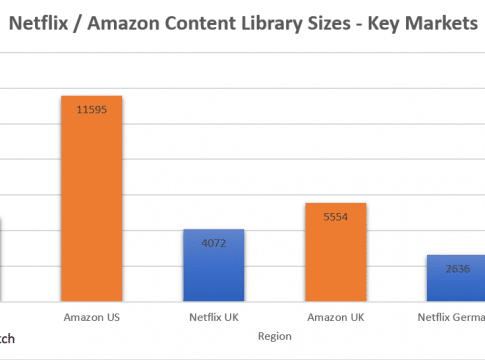 It’s hard to be immersed in the cord-cutting scene and not develop favorites. Crunchyroll brought some much-needed legitimacy to anime streaming. CuriosityStream offers a unique, amazing experience for science and history buffs. And Netflix, well, Netflix is without a doubt a key progenitor of the current cord-cutting movement and on-demand streaming in general.

But with over 200 streaming services now crowding the market, sentimentality must give way to pragmatism. Over half of Americans aged 18-44 have at least two paid subscription services, while most adults these days have at least one. I currently have four myself: Crunchyroll, Amazon Prime Video, Anime Strike (a Prime exclusive add-on service), and Netflix.

Among these, I have had Netflix the longest. I’ll also be the first to admit I probably have far more personal attachment to the service that I should. I have been a Netflix subscriber off and on for over a decade, with the longest and current stint lasting over 8 years. But now, after over a decade streaming some of my favorite TV shows through the platform, I just can’t do it anymore. As other viable cord-cutting options take off and pragmatism becomes a higher priority, Netflix has increasingly become a terrible, almost laughably bad deal. At least for U.S. customers like myself, Amazon Prime Video is far better for several reasons, which I will lay out below.

At this moment, I still have a Netflix account. By the time I finish writing this article, I will have clicked “cancel” on that membership.

By the Numbers: Amazon is Trouncing Netflix on Several Fronts

Numbers matter when it comes to streaming services, but there are two numbers that matter the most: content library size and price. There is some leeway here, of course. A large library and a cheap price are somewhat meaningless if the quality of the content isn’t there. That’s why free, ad-supported services like Crackle and TubiTV will never replace paid streaming services. Even in the case of TubiTV, which has a library size that’s larger than some of the major paid services, it’s clear that the amount of content is not always a substitute for quality.

Paid subscription services have the deep pockets necessary to pour millions into award-winning original content. Free services like Crackle and TubiTV do have some original content, but with marginal resources, the quality just won’t be there. Paid services such as Netflix, Amazon, Hulu, and now CBS All Access will always have them beat on that end.

Still, taking only content library size and price into account, Amazon isn’t just beating Netflix in key markets like the U.S., Germany, and the U.K. It’s demolishing them.

According to data from JustWatch, Amazon has over 11,000 TV shows and movies in its content library that U.S. Prime members get for free. Netflix has just over 4,800 titles in the U.S. or far fewer than half of what’s available on Amazon. The differences in the two services’ library sizes for Germany and the U.K. are not as extreme, but Amazon is still winning in both markets:

And then there’s the cost. In the U.S., the cheapest Netflix subscription is $7.99. For that, users only get a single standard-definition stream at a time. For HD and multiple screens, users need to pay $10.99. A Premium subscription for $13.99 per month offers more simultaneous screens and Ultra HD.  Netflix has slowly crept up prices in the past few years, even as its content library sizes have decreased. In the U.S., in particular, these price increases seem particularly troublesome in light of the worrisome decline in its licensed content library quality.

Amazon’s deal is even better for college students, who can enjoy almost all of those benefits but for just $49 a year ($4.08 a month), or $5.49 a month—even after a ridiculously generous 6-month free trial.

At its height, Netflix U.S. customers had not only the best content library of all Netflix regions but the largest. While the U.S. Netflix library is still the largest in the world, it’s no longer the best.

Around this time last year, I did a bit of research to determine which Netflix regions get the most top-rated TV shows and movies. What I discovered then is that Canada, Belgium, Brazil, the UK, Australia and New Zealand get all of the best top-rated movies. Netflix U.S. fell flat when it came to top-rated movies, but at that time was still a great place for TV shows.

That is still partially true, but the case for Netflix regarding its TV content is more than just a matter of quantity.

Of the top 10 IMDb-rated shows, you can find 8 of them on Netflix. Amazon Prime also offers 8 from that list of 10. The key difference here is that Amazon’s offering lacks what Netflix has been so keen to invest heavily in: original content.

To its credit, Netflix is far outspending its competition on original content. The company plans to spend $7 billion in 2018 on original content alone, which is part of its more long-term strategy on becoming a content provider in its own right. The top-rated TV show on IMDb, Stranger Things, is a Netflix original and absolutely deserving of its position.

This is not to say that Netflix is the only streaming service investing heavily in original content. In an effort to keep up with Netflix’s heavy focus on original content, Amazon is also increasing its spending. However, most of Amazon’s spending has been devoted to content licensing, to the tune of $3.5 billion. Only about $1 billion is being devoted to original content. Amazon’s plans to increase that spending in 2018 to keep up with Netflix, but it’s clear the company’s goal continues to be on more licensing agreements.

Despite its heavy spending, Netflix does not have an endless supply of money to spend on both original content and licensing agreements. Something has to give. It’s clear that the company has already given up the ghost when it comes to securing movie licenses for some of its biggest markets. With $7 billion on the line for original content in the coming year, it’s likely that TV licenses will also take a hit.

Combine that with the fact that many major networks and content providers (such as CBS and Disney) are not only starting their own services, but yanking their content from Netflix, and you have a dire situation for the overall quality that Netflix can feasibly provide in the future.

What Happened to Netflix in U.S.?

In 2007, Netflix had around 7.5 million users, a number that more than doubled by 2010. Prior to Netflix, no streaming services had worked. This was mostly hampered by the relative lack of high-speed internet access in the U.S. that made large-scale streaming nearly impossible. Other DVD rental services that could have tried it (such as Blockbuster) failed to invest the large amounts of money required to do so. Netflix, however, spent tens of millions in its early days to prove the value of its service.

With a large and growing subscriber base, Netflix was able to more easily secure licensing agreements from content providers looking to monetize in a quickly-expanding market. For all intents and purposes, Netflix was the only game in town.

Now, Netflix is operating in a heavily crowded market. Even its market dominance is now questionable if one looks solely at subscriber numbers. With over 85 million Amazon Prime subscribers in the U.S., Amazon is already winning, even if most Amazon Prime users don’t quite realize it. The almost exponential growth Netflix once enjoyed has more than tapered off, in no small part due to increased competition.

As a result, we’ve seen the Netflix content library shrink in size and decrease in quality. Netflix’s response—pouring ever-increasing amounts of money into original content—is probably a wise one, but it needs that content to be more than just an initial draw. It also needs licensed content to sustain viewers once they’ve binge-watched new seasons of Stranger Things, House of Cards, The Unbreakable Kimmy Schmidt and any other originals the company has planned down the road.

As it stands, this isn’t the case. Past its original content, Netflix is experiencing a content drought in the U.S. that only seems to be growing. For the price and when compared to its now chief competitor Amazon, a Netflix subscription simply does not seem to be justified, especially for U.S. subscribers.

In most cases, canceling a subscription service comes with little emotion, other than perhaps disappointment. It’s just business. When a service doesn’t live up to expectation, you cancel it and move on. But for me, Netflix is different.

At 33 years old, I’ve been a Netflix subscriber for nearly a third of my life. In that time, I’ve experienced a lot of major life events. Netflix has been there for me and with me through a fair number of emotional ups and downs, through hard times and periods of immense joy.

It almost seems juvenile to have an emotional attachment to a streaming service, but a decade is a long time.

Netflix keeps a record of everything you watch. If you’ve only ever used the service on an app, you might not actually know this. But in your user settings, you can look at everything you’ve streamed, going back to the very beginning of your service.

I’ve had this particular Netflix account since May 2009, which I re-established after the company started up its streaming service. The first thing I watched through Netflix on-demand was The Chronicles of Narnia.

Much of my watch history reads like a scrapbook, and for me, the thought of canceling on such a historical record of my life is bittersweet.

On my first wedding anniversary, my wife and I shared laughs while watching the Jackie Chan movie, The Accidental Spy.

In the days after my beloved grandfather finally passed in 2015  following months spent in pain and a depressingly slow degradation, I soothed myself by watching episodes of Psych.

And in the joyous and tired week that my son was born this past September, I was working my way through a binge of Frasier.

I’ve used Netflix as it grew from a DVD-by-mail service into an online streaming powerhouse. Like a proud family member, I’ve rooted it on from the sidelines, encouraging others to get with the program, defending it in the past few years even at its luster faded.

But as an adult and now a parent, the dollars and cents matter far more at the end of the day. Netflix needs to justify its existence to me more than ever. Unfortunately, it has little to say in its own defense. While I love its original content, it no longer provides what I need at a price that makes sense for someone with multiple streaming services. And not because my wants and needs have changed. Netflix has changed, and not for the better.

In many ways, Netflix is like the Nintendo of the video streaming world. It helped innovate and justify an entire industry. But somewhere along the way, whether due to poor management decisions or stiffer competition, or both, it lost its way.

I’m left to wonder if it will ever find that narrow, trailblazing path again. If so, I’ll be among the millions adding to its subscriber numbers. For now, however, despite a handful of stunning originals, I can’t keep rooting for and supporting a service that only seems to grow pricier and offer less as time goes on.