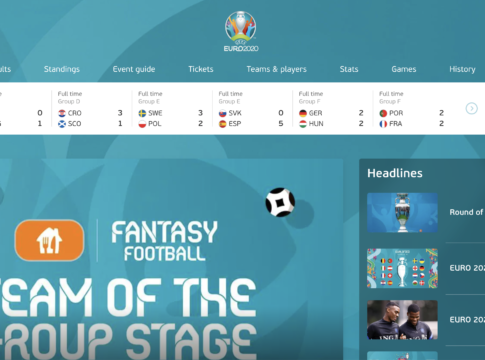 If you are wondering how to watch the UEFA Champions League without cable in the US, our guide has the answer to that question. First, you’ll need a streaming service offering channels that carry broadcasting rights in the United States. Those are CBS and TUDN Deportes, and our team checked which streaming services are the best picks for you. Our primary selection includes fuboTV, DirecTV Stream, Vidgo, Hulu + Live TV, Paramount+, Amazon Prime Video, and YouTube TV. Keep reading to learn more about each service and discover how to watch UEFA Champions League today!

Our pick for watching the UEFA Champions League in the United States: Sling TV

fuboTV is one of the top options around for watching the UEFA Champions League in the US without cable. It lets you enjoy all the action with both English and Spanish commentary, and it also comes with over 100 other channels, with tons of content to enjoy. It also works on lots of different devices and comes with a huge amount of DVR space for storing games to watch later on.

What is the UEFA Champions League?

The UEFA Champions League is the premier competition in European football. As the name suggests, this tournament pits the champions and greatest teams from all major European leagues against one another, typically featuring Premier League giants like Manchester City and Liverpool, Bundesliga kings Bayern Munich, Ligue 1 leaders PSG, and Spanish teams like Real Madrid and Barcelona.

The teams are divided into groups for the first phase, with the best-performing sides making it through to a knockout competition, all the way up to the Champions League Final, one of the most hotly-antiicpated games in the soccer calendar.

Each UEFA Champions League season enters its knockout battles in the spring. If you want to enjoy top-class football action, you could be able to watch some matches for free. Most streaming services offer a free trial to test their platform. If you haven’t registered an account with those providers before, you can use the trial offer.

The test period usually lasts three to seven days and depends on the platform. Here is an overview of the available deals:

You’ll need to sign up for an account, and most will also require your credit card details. Don’t worry because everything is safe, but pay attention to your trial expiration date. If your free deal expires, the platform will charge your card automatically for a full month of service. Once you pick the service you are happy with, go ahead and continue with a premium subscription to maximize the UEFA Champions League viewing experience.

Sling TV is a great option to enjoy the UEFA Champions League. The platform offers two starting packages – Orange and Blue. Each costs $35 per month, and you get both at only $50 monthly. You’ll find TNT, TBS, and other sports channels in the Sling TV lineup.

It’s important to note you can stream CBS with Sling TV, but not directly. Instead, you need to acquire the AirTV Anywhere set-top box provided by the company and an HDTV antenna. If you secure that, you can stream every local channel, which secures impressive coverage in your region. And you can watch all the football matches that the local CBS station shows.

Check out our Sling TV Review for more details.


fuboTV sounds like the smartest option to watch UEFA Champions League without cable in the US. The streaming service gathers both CBS and TUDN Deportes, which means that you can enjoy all matches. Furthermore, you can pick between English and Spanish commentary, which many viewers will appreciate.

You can use a seven-day free trial to test fuboTV and see if it fits your preferences. The service comes with over 100 channels at $64.99 monthly after the trial expires. Apart from a huge selection of sports, entertainment, and news channels, you can enjoy additional benefits. fuboTV allows watching the platform on three devices simultaneously. It makes this a great package deal for the entire family. You can also record up to 250 hours of content and watch it later. It ensures you don’t miss any Champions League games due to work or other appointments.

fuboTV also supports a huge range of devices. You can watch it on Android smart TVs, Apple TVs, Chromecast, Roku, etc. So whether you are at home or on the go, fuboTV is an excellent choice.

DirecTV Stream has an impressive channel lineup that includes CBS Sports Network and TUDN. However, please note that you can only get both with the Ultimate and Premier packages. TUDN is available as an add-on channel in Entertainment and Choice pricing plans. On the other hand, CBS Sports Network isn’t a part of those packages.

You can get a five-day free trial with this service to test it. The pricing goes from $59.99 per month. However, the Ultimate package is $94.99 for new customers (a three-month deal), and the Premier pricing plan costs $139.99.

DirecTV Stream offers more than 140 channels in its most generous package. You can watch up to 20 streams within the same Wi-Fi network, and there’s unlimited DVR space. Apart from sports, you get loads of other content, including over 40,000 on-demand titles. You can get more details in our DirecTV Stream Review.

If you’d like to enjoy UEFA Spanish League with Spanish commentary, that’s possible on Vidgo. The streaming platform includes TUDN among its available channels, but you won’t be able to access CBS. If you only get the Spanish Mas package, you’ll pay $30 monthly for over 50 channels.

Vidgo also offers English package deals with over 100 channels. They cost from $55 to $79.95 per month, but you’ll need to combine them with other services to watch UEFA football. you can click here to start a 7-day free trial.

Hulu hit a huge jackpot with its live TV service. If you pick the Hulu + Live TV package, it’ll cost you $69.99 monthly. And if you are paying that much, you can consider adding the no-ad option for an additional $6.

You can stream football on up to two devices simultaneously, and you get access to 85+ other channels. However, Hulu Live TV only covers CBS and CBS Sports Network, which means you won’t get access to TUDN.

If we tell you that you can watch UEFA Champions League with Paramount+ while paying only $4.99 per month, that sure sounds like a good deal. The platform mentions that you’ll get UEFA CL matches over a separate live feed, but be ready for limited commercial breaks.

The Premium deal includes the local live station, which means you can watch all games aired on CBS. There’s no TUDN, but Paramount+ is the replacement for CBS All Access. So, you should get premium English-language coverage of UEFA Champions League action.

Many would say that Amazon Prime Video offers excellent value in the United States since you only pay $14.99 monthly. For that money, you get access to Paramount+, which means you can watch all UEFA Champions League matches shown on CBS.

Amazon offers up to three simultaneous streams and access to an on-demand library with thousands of hours of content.

There are better choices than YouTube TV for watching the UEFA Champions League. The reason why we are saying that is the platform doesn’t offer TUDN in its channel lineup. You’ll only be able to watch matches on CBS, which means only selected games would be available.

YouTube TV costs $64.99 per month and gathers an impressive channel selection. You can also record without limitations, stored on the platform for up to nine months. The service supports streaming on up to three devices simultaneously. If you’d like to check out YouTube TV, start your free trial registration process here.

How to watch the UEFA Champions League on Amazon Fire TV

You can use Sling TV,  fuboTV, DirecTV Stream, Vidgo, Hulu+ Live TV, Paramount+, Amazon Prime Video, and YouTube TV to watch UEFA Champions League on Amazon Fire TV. The process is identical – you begin by heading to the Amazon App Store. Now, look for the app for the service you subscribed to and install it on your TV. Access with your credentials and enjoy watching the action.

How to watch the UEFA Champions League on Roku

How to watch the UEFA Champions League on Apple TV

The apps available on the Apple App Store include Sling TV,  fuboTV, DirecTV Stream, Vidgo, Hulu+ Live TV, Paramount+, Amazon Prime Video, and YouTube TV  So download the desired one and use your credentials to access live Champions League football.

You may also make use of a VPN like ExpressVPN in order to watch Champions League games on other services outside of the US. You can use a VPN to connect to secure servers all around the world, hiding your location and protecting your privacy. This lets you get around certain geo-restrictions or blocks that certain services have in place and log into accounts to view exclusive content like Champions League games.

This could be a way for you to access your favorite services when you’re out of the country for work or on vacation. You can also use a VPN to access services and create accounts on other platforms outside your own country, like BT in the UK, which has the rights to most Champions League games. However, you’ll still need to have a valid address and card to make an account with these services, so it’s usually easier to sign up for a service in your home country, rather than using a VPN.

The best matches to watch in the Champions League

32 teams compete in the UEFA Champions League, and there are more than 120 games in total, including the group stage games and the two-leg knockout round games. You might not be able to watch them all, so which games are the best to watch?

Well, this will depend on your own preferences and allegiances. Obviously, if you have a preference for one team, you may want to follow all of their matches from the group stage through to the knockouts.

If you just want to see the most exciting and tense games, it’s better to wait until the group stages are over, as this phase usually eliminates the weakest teams and sets up some thrilling clashes later on where we can see the likes of Liverpool and Real Madrid going toe-to-toe.

It’s also a good idea to check out the Champions League group stage draw to see which groups have the best teams or most competitive games. Sometimes, big teams are drawn in a group together and have to play one another home and away, giving fans two big games to look forward to.

Of course, the most exciting match of all and one that no soccer fan would want to miss is the Champions League final. This usually takes place in May or June of each year, depending on the calendar, and it always involves two of the very best teams from Europe competing for the sport’s most prestigious prize.

Aneeca Younas is a graduated journalist with years of experience writing in different niches based in Oakland, CA. She is a huge movie fan that also enjoys watching sports. That's why she spends hours daily using various streaming services. Over the years, Aneeca profiled herself as an expert in cable-free and VOD platforms.