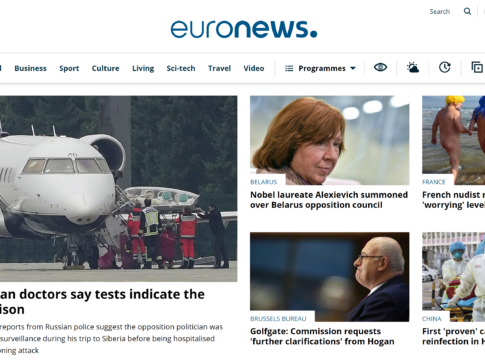 Sling TV is the only streaming service that lets you watch Euronews live without cable. However, the following streaming services have a good selection of other international news channels: fuboTV, Hulu with Live TV, AT&T TV NOW and YouTube TV. In this article, we’ll help you decide which option is best for you. Let’s get started!

Before we continue, we want to highlight a particularly relevant stream for news, sports, and entertainment. Sling TV is one of the best options for streaming with a rich catalogue of 50+ live channels and 50k+ on-demand movies and episodes.

Sling TV is considered a pioneer in the streaming service industry. They dared to make cable TV available via the internet in 2015. After their offering gained popularity, many other companies followed them into the space. It’s the only major streaming brand that carries Euronews.

There are three different options for getting started with Sling TV. You can either buy one of the two base plans or you can get both base plans together. If you choose the third option, you’ll pick up a discount on your monthly fee. Various add-ons let you pick out which channels you want to add to the base channel lineup. You’ll need the News Extra add-on to get Euronews. It costs a few dollars more per month and comes with Euronews and nine other news channels.

When it comes to devices, Sling TV is slightly ahead of most streaming services:

Sling TV’s simultaneous stream policy is one of the oddest things about the service. You get three streams for sharing any Sling Blue channel, but only one stream for all Sling Orange channels.

Sling TV’s DVR recently received an upgrade. You no longer have to pay an extra monthly fee to use it and it now works with almost every channel. You only get ten hours of recording time by default, though. You can upgrade to 50 hours by purchasing the DVR upgrade.

Sports-oriented streamer fuboTV doesn’t carry Euronews, but it does have CNBC World and BBC World News. A few other American news channels are also available. It might be worth a look if you’re a sports fan, particularly now that fuboTV has struck a deal with Disney to carry its ESPN channels.

fuboTV seems to have discontinued fubo Standard, which was a stripped down plan with minimal features. The cheapest fuboTV plan now is fubo Family, which comes with about 107 channels and 500-hour DVR upgrade. For a few dollars more, you can add on Showtime movie channels with the Family Plan with Showtime plan. Ultra also comes with all the Showtime channels as well as the Sports Plus add-on pack, which gives you 28 more sports channels. fubo Latino comes with 32 Spanish-language channels.

You can learn more about fuboTV’s subscription plans here.

You’ll need to buy the fubo Extra channel add-on pack if you want CNBC World and BBC World News. It only costs a few dollars a month more, yet it comes with 45 channels. Other channels that come in the add-on pack include Newsy, ESPNEWS, Nat Geo Wild, Discovery Family and Discovery Life.
You can see a full channel list here.

fuboTV has its bases covered when it comes to device apps. Just about every major device is included in the lineup including Chromecast, Roku, Amazon Fire TV and many others. There are no major shortcomings here.

All plans now come with three streams. This puts fuboTV on par with all the other streaming services. Previously, fuboTV was using a “two streams with an option to buy a third stream” model. Three streams is enough account sharing flexibility for all but the very largest families. If you need more account sharing flexibility, a five-stream upgrade is available. Very few other streamers offer five streams or more.

fubo Family comes with 250 hours of recording time, which is generous enough for most purposes. However, avid TV watchers– particularly those with busy schedules– may need even more. To meet those needs, fuboTV released a couple of new DVR upgrades in 2020. You can now choose between a 500-hour and 1000-hour DVR upgrade.

As is the case with most live TV oriented streaming service, there’s a TV rewind feature that lets you catch up with your favorite shows. On fuboTV, this feature is called Lookback and it lets you go back as far as 72 hours in the past. A small selection of movies can help fill in the gap when there’s nothing good on live.

Hulu used to only offer on-demand entertainment, but several years ago it started offering live TV channels. All Hulu with Live TV subscribers get full access to the main Hulu app. Euronews isn’t a part of its channel lineup, but CNN International is.

The main subscription is very competitive, since its reasonably priced relative to other live TV streamers and comes with over 65 channels. A bundle offer lets you get Hulu + Live TV, the new Disney+ on-demand service and ESPN+ together for a reduced price.

As mentioned above, Euronews is not available through Hulu with Live TV. However, the base plan comes with CNN International. Other news channels that you get include CNN, Cheddar, MSNBC, Fox News, Fox Business, ABC News Live, CBSN and HLN.

Hulu with Live TV has above average support for TV devices:

No other streaming service offers an unlimited streams upgrade. However, if you opt out of that, you’ll only get two streams.

Hulu with Live TV’s 50-hour default DVR offers limited storage compared to DVR offerings from other streamers. That, together with the fact that you can’t fast forward through commercials unless you purchase the 200-hour DVR, makes Hulu with Live TV seem slightly behind the curve here.

The new bundle deal puts Hulu with Live TV way ahead of other live TV streaming services when it comes to on-demand. If you get the bundle, you’ll be able to access two premium on-demand services when you subscribe: Hulu and Disney+.

AT&T TV NOW used to offer one of the worst streaming services deals on the market, but the addition of some feature upgrades and the new HBO Max on-demand service has helped it become more competitive. A new budget-oriented subscription plan has helped make it more affordable, as well.

AT&T TV NOW has six plans, but it puts most of its marketing efforts behind Max and Plus. The Max plan comes with the HBO Max on-demand service. Plus offers a basic channel lineup and its low price point caters to budget-minded TV fans.

You can’t get Euronews, but you can get several other international news channels. CNN International is a part of the channel lineup, as is BBC World News.

AT&T TV NOW has apps for most of the devices that are popular among cord-cutters:

You can stream to up to three devices at once. That’s about even with what the competitors are offering in terms of account sharing flexibility.

The new DVR limit is 500 hours, which is a big upgrade over the previous 20-hour limit.

HBO Max puts AT&T TV NOW toward the top of the list in this category. Every film and TV show HBO has ever made is available through the on-demand service, plus all kinds of new exclusive originals. The 72-hour Rewind feature is convenient as well.

Google’s YouTube TV doesn’t have Euronews either, but it does have BBC World News and CNBC World. Both international news channels are included in the base plan, which means you won’t have to pay extra for them. The main thing this streamer has going for it in terms of features is its unlimited DVR.

YouTube TV is not as great of a deal as it once was, due to a recent fee hike. The additional of a few extra channels has offset that added cost somewhat, though.

As mentioned above, Euronews is not part of the lineup. You get CNBC World and BBC News instead, along with the 85+ other channels that are a part of the base plan.

Now that the YouTube TV app is back in the Amazon app store, YouTube TV has excellent TV device support:

You get three simultaneous streams when you join by default. That puts YouTube TV about even with its competitors in this area.

Now that PlayStation Vue is no more, YouTube TV has the best DVR in the space. No other streamer offers unlimited DVR storage.

YouTube TV’s on-demand feature is about average. Recently aired TV programs appear in the vault for a short period of time so that you can stay current with your favorite shows.

How to Watch Euronews on Amazon Fire TV

You can watch Euronews on Amazon Fire TV with one of these streaming services: Sling TV.

How to Watch Euronews on Roku

You can watch Euronews on Amazon Fire TV with one of these streaming services:  Sling TV.

How to Watch Euronews on Apple TV

You can watch Euronews on Amazon Fire TV with one of these streaming services: Sling TV.