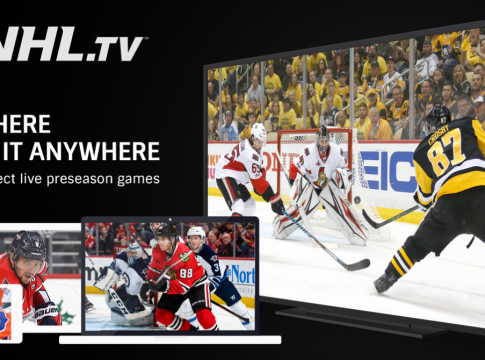 Now that YouTube TV, Hulu with Live TV and Sling TV are available, is the NHL’s official streaming service still the best way to watch every NHL game without cable? Read on to find out how NHL.TV compares to all the major new cable replacement services.

If you sign up with an internet cable service that has good local TV availability as well as NBC’s cable sports channel NBCSN, you should be able to catch a nice chunk of NHL action.

There are, however, two potential problems with using internet-based cable services to access NHL games.

The first issue is that all the cable TV replacement platforms are still working out deals with NBC affiliates. Depending on where you live, you may not be able to catch local broadcasts without some type of TV antenna setup.

Secondly, you can’t opt to get out-of-area local TV broadcasts when you sign up for a cable replacement service. For example, if you’re a Penguins fan living in Texas, you can’t just get opt to get the Pittsburgh area TV channels that air Penguin broadcasts. You’re stuck with whatever local TV options are available near you.


fuboTV is small compared to the big name cable replacement companies, but in the beginning of October it passed the 100,000 subscriber mark.

Like YouTube, Sling and Hulu, fuboTV also has a deal with NBC, so you can catch NHL action via NBCSN and possibly local TV games, too. fuboTV has been working hard to expand their list of local network affiliates.

Related: Fubo TV Channel List – What Channels are on fuboTV?

For $25 per month, you can subscribe to “Sling Blue” and catch NHL action through NBCSN, NBC, the NHL channel and Fox regional sport channels. However, you should check to see for sure before you sign up.

While Sling TV is working to contract with more local NBC affiliate stations, they don’t have agreements with everyone just yet. Check your ZIP Code to make sure you can get the NHL through NBC in your area.

Like Hulu with TV, Sling offers DVR functionality – but you have to pay five extra dollars to get it.

If your local affiliates broadcast hockey games, Hulu with Live TV is not a bad way to tune in. With Hulu, you can even pick out your favorite NHL team and receive automatic news updates.

Hulu also offers cloud DVR functionality, which gives you the ability to record NHL action and watch it later if you don’t have time to tune in live or buffer games so that you can zoom through commercials.

The downside of Hulu with TV is that it’s a little bit pricey ($40) compared to some competitors like Sling TV.

YouTube TV and Hulu With Live TV are the same price ($40) and have comparable cable channel packages. And, like Hulu with TV, YouTube TV has fairly decent local TV coverage.

YouTube TV has the best DVR deal out there right now. You don’t have to pay extra for DVR and you can record an unlimited number of hours.

If your local TV stations don’t air NHL hockey, then your only option is NHL TV.

However, if you live in a northern state there’s a big chance that your local TV networks air lots of hockey games for free. You can use both of the devices listed below to pluck broadcast TV signals out of the air and tune in via your computer and fill in any local TV gaps.

Mohu Airwave is somewhat bare bones because it can’t record, but it is very easy to use. If you’re looking for a simple way to integrate live broadcast TV and web video services, it’s worth a look.

The most notable thing about Airwave is the way its program guide pulls in YouTube, Hulu and other internet video sites straight into its EPG.

Old school DVR hardware like TiVo and Tablo require you to pay to use their EPGs. Plus, their EPGs don’t integrate with the web.

As mentioned above, the main downside of Mohu Airwave is that it can’t record. If you want the ability to fast forward through commercials and boring moments during NHL games, you may find it lacking.

Turn your computer into a DVR with HDHomeRun (about $130)

HDHomeRun is similar to Mohu Airwave. Both devices capture TV broadcasts. However, HDHomeRun gives you an extra feature: the ability to record broadcast NHL games.

The HDHomeRun device itself costs about $80. However, unlike Mohu Airwave, HDHomeRun does not come with a TV antenna – you have to buy one separately.  The extra cost isn’t too big of a deal, though, because you can get a great TV antenna for about $15 or $20 through Amazon. (Amazon makes excellent basic TV antennas and so does Mohu).

Like Mohu Airwave, HDHomeRun is easy to set up. Basically all you have to do is plug your HDHomeRun into the wall and connect it to your WiFi router.

Once you get set up with HDHomeRun, you have to pay a yearly $35 fee for DVR functionality – which brings the total initial cost to around $130.

NHL TV bills itself as “the way to watch live hockey” – and it pretty much is, especially if you want a sure-fire way to catch every single game.

With a season pass or monthly subscription, you can watch every match via the excellent NHL.tv web browser player and/or the NHL app.

Of course, blackout rules still apply. If a hockey game isn’t on TV, don’t expect to be able to watch it online via NHL TV. Additionally, you can’t get nationally broadcast games via NHL TV, either – that includes the playoffs and the Stanley Cup.

Another potential downside: NHL TV will only let you log in with one device at a time. If there are fans of multiple NHL teams in your family, you’ll have to hash out which game you want to watch when there are schedule conflicts.

The NHL is currently offering 35% discounts to students and members of the military, so be sure to take advantage if you qualify.

The $140 yearly pass is kind of pricey, but it gives you a chance to follow every team’s every move if you’re a hardcore fan. If you’re a casual hockey follower, it makes more sense to just wait until the end of the season and get the $25 monthly plan, to follow the playoffs and other important games.

In my opinion, built-in DVR (Digitial Video Recording) functionality and mosaic view are two of the coolest features that you get with NHL TV.

Here’s an in-depth breakdown of everything you get with NHL TV.

The app supports a buttery-smooth 60 frames-per-second video and works with Apple TV, Roku, PlayStation 3, PlayStation 4 and Xbox One. Plus, both the app and the web player are compatible with Chromecast. Chromecast lets you can plug into your living room TV via HDMI and cast NHL TV from your mobile device.

In addition to playing video, the NHL App lets you get notifications for important events like the beginning of games, goals and breaking news. You can pick the team you want to track via the settings menu.

The bad thing about the NHL app is that it doesn’t support DVR or mosaic view.

NHL TV is the only streaming service that offers complete access to all NHL content. If you get the NHL Channel through a cable replacement service, the most you’ll get is 80 games.

DVR functionality is arguably NHL TV’s best feature. With DVR controls, you can buffer games and zoom past commercials. Or, you can rewind for replays if someone scores when you’re not paying attention or away from the couch.

When two teams with tough defenses (or weak offenses) go up against each other, the action tends to drag a bit. Mosaic view fixes this problem by allowing you to watch up to 4 games at once.

Alternatively, you can fill your screen with different camera views instead.

The ability to switch audio broadcasts allows you to listen to your hometown announcer even when your team is playing in a different city. You can opt to listen to a familiar voice when you watch the game – or tune into the opposing team’s announcer to see if they’re talking smack about your favorite players.

If you’re just a casual NHL fan, you may want to check out free NHL content on YouTube before you sign up for NHL TV or a cable replacement service.

The NHL is now giving away on-demand condensed games via the official NHL YouTube channel.

Condensed games provide a quick way to catch up with your favorite team, so the NHL YouTube channel could be all you need if you don’t have time to watch live games or simply aren’t interested enough to pay money to see them.

In addition to all kinds of highlights and condensed games, you can also use YouTube to find out what’s happening around the league. Just type NHL into YouTube to pull up the NHL score box.

You can click the video to get a quick recap of all the major plays that happened during the game. You can even get a quick view of what your favorite team has been up to by clicking the “related teams” box underneath the score box.

NHL Online In a Nutshell

Even though cable TV replacement services are available, NHL TV is still the best option if you’re a hardcore hockey fanatic and you want to watch every single NHL game without cable. With reasonable prices, fancy features like mosaic view and configurable cameras, NHL TV is a pretty impressive deal overall – but it is pricey.

If all you want to do is watch your local NHL team play via the web, there’s a chance you can use one of the new cable TV replacement services to stay abreast of the action. All the major players are still working out deals with local TV affiliates, though, so be sure to check and see what kind of local TV you can get before you sign up.

If you like to watch hockey every now and then, the NHL’s free YouTube channel may be all you need. A ton of NHL info is available via YouTube. You can get not only clips, but also condensed games, interviews and other content.