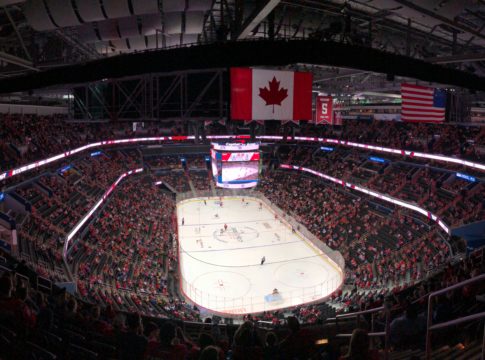 The regular NHL season begins on Tuesday, October 12th at 7:30pm ET with a doubleheader. The first matchup is between the Pittsburgh Penguins and the Tampa Bay Lightning, followed by the nightcap featuring the Seattle Kraken against the Vegas Golden Knights. Both games will stream on ESPN with a simultaneous broadcast to ESPN+.

How to Watch NHL Games on ABC

Starting February 22nd, ABC will air a weekly game every Saturday night as part of their 10 exclusive games this season. An important note is that all games airing on ABC will be available to stream on ESPN+, too.

To watch ABC without cable this season, you’ll need to purchase a compatible streaming plan. The following streaming services carry ABC on some or all of their plans:

How to Watch NHL Games on ESPN

The 2021-2022 season marks the first time ESPN will be airing NHL games since back in 2004. ESPN+ and Hulu will broadcast 75 live games this season. ESPN and ABC will broadcast a collective 28 games. All-told, that’s a total of 103 exclusive games being broadcast on all three platforms.

ESPN will air 18 games exclusively throughout the season. An important note is that the 2022 NHL All-Star Skills Competition will air on ESPN in February. ESPN will air NHL games on select Tuesday, Thursday and Friday nights.

To watch ESPN without cable this season, you’ll need to purchase a compatible streaming plan. The following streaming services carry ESPN on some or all of their plans:

How to Watch NHL Games on Hulu

A Hulu with Live TV subscription includes TNT and ABC, so you can watch all the exclusive NHL games airing there, but it does not include ESPN. However, you can stream over 75 exclusive games through the ESPN+ add-on with Hulu. It’s just $6.99 per month and gives you access to thousands of out-of-market games.

ESPN+ will air an exclusive matchup every Tuesday on Hulu and ESPN+ from Oct. 19th to Dec. 28th. Through January, ESPN will host an exclusive Friday night matchup with Hulu as well. In 2022, exclusive games on ESPN+ and Hulu will air on Tuesdays and Thursdays.