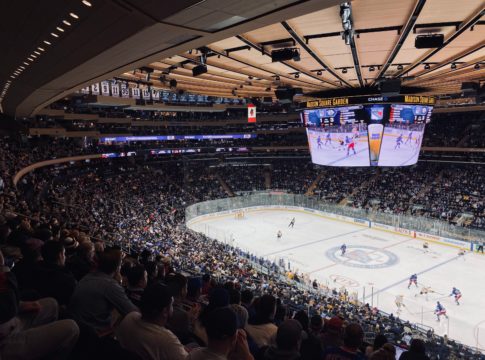 We’re about to enter the NHL season, which means it’s time to start thinking about how you’re going to watch the hockey games. There are so many streaming options out there, and they all offer slightly different things. That’s why it’s important to do your research and determine which streaming service is the absolute best for hockey fans.

The good news is, we extensively researched all the different ways for you to stream NHL games this season and ranked them. There are a variety of options available for every type of fan. Whether you don’t want to miss a single game, or if you’re just a casual hockey viewer, there’s a streaming service on our list for you.

One big change to know about is that after 16 years, NBC will no longer air NHL games nationally. The NHL has entered into a new agreement with ESPN and Turner Sports (TNT and TBS), giving them exclusive coverage of the NHL season. In 2022, ESPN will air the Stanley Cup on ABC. You can watch the games that air on ABC on ESPN+. So, for the 2021-2022 season, ESPN+ will be an essential add-on service when it comes to streaming NHL games.

Another important note about the NHL is that NHL in-market broadcasting rights are assigned to Regional Sports Networks (RSNs). Some of the services we’ll cover include RSNs, but they usually come at a premium price overall. However, they are essential if you want to watch the games of the teams in your region. For example, if you live in Boston, you’ll need NESN to watch the Bruins play.

You can get an ESPN+ subscription for just $6.99 per month. This year, it’s an essential addition for any NHL fan.

Prior to the 2021-2022 season, NHL fans could use NHL.TV to watch out-of-market games. This year, NHL.TV is going away for US viewers and is being replaced by ESPN+. You can stream over 1,000 out-of-market games on ESPN+, but it isn’t a great standalone option for hockey enthusiasts. That’s because games featuring the team in your local market are blacked out. For example, if you live in Boston, you won’t be able to watch any Bruins games on ESPN+. The 66 games being broadcast nationally on ESPN and TNT this season are blacked out, too.

However, ESPN+ is a must-have add-on streaming network for any NHL fans for the access to so many out-of-network hockey games. It’s just best paired with a live TV subscription. This year, ESPN+ will air an exclusive game every Tuesday from October 19th to December 28th. Additionally, all games aired on ABC will be available to watch on ESPN+. This includes 10 regular-season games, the NHL all-star game, and the Stanley Cup Finals.

Most comprehensive but expensive plan

If you’re looking to stream every single NHL game of the season, the best option is to combine DirecTV Stream with an ESPN+ subscription. If you opt for the ‘Choice’ plan, it comes at a hefty price tag of $84.99 per month, plus an additional $6.99 for ESPN+. However, this plan carries every regional sports network that covers the NHL, so you will never have to miss a single game with this service. This is by far the best plan for the devoted hockey fan. The ‘Choice’ plan even includes 3 free months of HBO Max.

If that’s a bit outside of your budget, you can save some money with the ‘Entertainment’ package. This package doesn’t include all of those regional sports networks, but it does give you access to ESPN, ABC and TNT to stream NHL games.

There is no free trial, but after you sign up, if you aren’t happy with DirecTV Stream, you can cancel within 14 days for a full refund.

Best bang for your buck

Sling TV comes in second because it’s the most affordable option to stream NHL games. There are three plans; the Orange & Blue plan includes both ESPN and FOX Sports for $50 per month. You can also go for one of the cheaper options – Orange or Blue – for just $35 a month. The problem for sports enthusiasts is that the Orange plan includes ESPN, while the Blue plan has FOX Sports. Both plans include TNT, so if NHL is the only sport you care about, the Orange plan alone will suffice. Fox Sports doesn’t air NHL coverage anyway; only Fox Sports Network (renamed Bally Sports) does, which Sling TV doesn’t include.

Sling TV doesn’t carry ABC, but if you pair this subscription with ESPN+, you can watch all the games that air there anyway. A Sling TV subscription paired with a $6.99 ESPN+ subscription would be just $41.99 per month. At less than half the price of a DirecTV Stream plan, this is an excellent budget option. It comes in second to DirecTV Stream only because Sling TV doesn’t have as many regional sports networks, so there will be some games you just can’t see.

Other features of Sling TV are the 50 hours of DVR streaming included in all three plans, and the fact that you can stream on up to three devices at the same time. Right now, Sling TV is running a promotion where you can get your first month for just $10, so it’s a great time to try it out.

YouTubeTV includes ABC, TNT and ESPN, so paired with an ESPN+ subscription, it will cover most NHL games of the season. For $64.99 per month, you get access to over 85 channels. YouTubeTV also includes unlimited DVR service, which is rare at this price point. With a YouTubeTV subscription, you can have up to six accounts for your household, another huge bonus for this plan.

It also doesn’t carry the NHL Network or Regional Sports Networks, but it does carry other sports channels, like NBA TV and the MLB Network. If you’re okay with that, this is a cheaper alternative to DirecTV Stream with some serious extra perks. You can try it for free for 7 days.

Average pricing with some RSNs

Another great option for streaming live sports, including NHL games, is fuboTV. A subscription to fuboTV includes access to ESPN, ABC, the NHL Network, and FOX. It’s great for streaming other sports too, with NBA TV, the NFL Network, the MLB Network, and more. FuboTV is not only a sports-streaming service, so the whole family will enjoy the over 100 channels that come with a $64.99 subscription.

An added bonus of a fuboTV subscription is the fact that you can have up to three screens logged on at once, so you can share the cost with friends or family. With a starter pack, you get 250 hours of DVR storage, and can upgrade to more for a fee. It carries quite a few regional sports networks, too, so you can watch a lot of the games that aren’t nationally televised.

FuboTV doesn’t have TNT, which will start to be a problem for NHL fans. YouTubeTV wins out by a hair for this reason, but fuboTV is still a great option for hockey fans. There’s a free trial available so you don’t have to commit just yet.

Best for the whole family

A similarly priced option to fuboTV is signing up for the Hulu + Live TV service. This subscription gets you access to ABC and TNT to stream NHL games. It includes over 75 additional channels, and 50 hours of DVR recording. It costs $64.99 per month, and you can add on ESPN+ for just $6.99, or go for a bundle that includes ESPN+ and Disney+ for $72.99 per month.

We rated fuboTV as a better option than Hulu because you have access to more channels, including ESPN, and more DVR recording, at a slightly lower monthly rate. Another downside of Hulu + Live TV is that it only carries the regional sports networks for four teams: the Chicago Blackhawks, Philadelphia Flyers, San Jose Sharks and Washington Capitals. If you’re looking to stream every single game of the season, this plan will come up short.

However, if Disney+ is a priority for your family and you only want to watch the nationally televised NHL games, the Hulu + Live TV bundle might be the best choice. You can try it for free for 7 days, and then get your first three subsequent months at a $10 discount rate.

How to Watch NHL Games on Amazon Fire TV

You can watch NHL games on your Amazon Fire TV with all of the services we mentioned in this article: DirecTV Stream, Sling TV, YouTube TV, fuboTV, Hulu + Live TV, and ESPN+. Simply download the app corresponding to your streaming service and sign in to your account to get viewing.

How to Watch NHL Games on Roku

You can watch NHL games on your Amazon Fire TV with all of the services we mentioned in this article: DirecTV Stream, Sling TV, YouTube TV, fuboTV, Hulu + Live TV, and ESPN+. Just add the channel on the Roku Channel Store and sign in to start streaming.

How to Watch NHL Games on Apple TV

You can watch NHL games on your Amazon Fire TV with all of the services we mentioned in this article: DirecTV Stream, Sling TV, YouTube TV, fuboTV, Hulu + Live TV, and ESPN+. Simply download the app corresponding to your streaming service and sign in to your account to start watching.