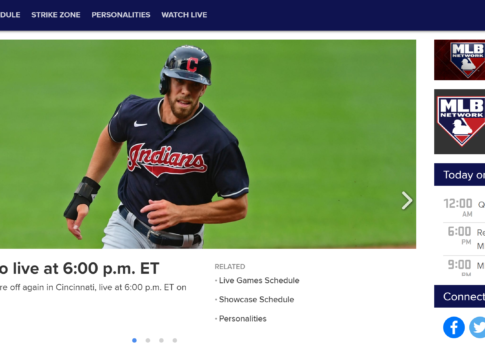 You can watch MLB Network without cable with one of these streaming services: fuboTV, Sling TV or YouTube TV. In this article, we’ll help you decide which streaming option is best for you. Let’s get started!

When sports-oriented streamer fuboTV came out with its own branded sports news network a few months back, we thought that this meant that it would never strike a deal to carry ESPN. We were wrong. ESPN and several other Disney channels are now live. These additions may cause sports fans to take fuboTV a little more seriously. The fact that it’s one of just two other streaming services that carries MLB Network gives it another big edge over the competition.

The plans are all about features. The more you pay, the better features you get. You start out with a basic DVR and limited account sharing, which you can upgrade by purchasing the premium plan of your choice. The biggest channel expansion pack (called fubo Extra) comes with fubo Ultra– the most expensive plan. If you get it, you’ll receive additional channels along with all the feature upgrades. The base pack comes with about 100 channels.

Learn more about fuboTV’s subscription plans here.
*Note that in order to see the Family, Entertainment, and Ultra plans, you need to first press "Start Free Trial." After you create an account, you'll see all of these plans.

MLB Network comes with the Sports Plus add-on. You have to pay a few extra dollars a month to get it, but the added cost might be worth it if you are a sports nut. Other channels that come in the pack include NFL RedZone, NBA TV, NHL Network, MLB Strike Zone, Stadium, Tennis Channel, ESPN U and ESPNEWS. fuboTV’s in-house sports news channel fubo Sports Network is similar to ESPN. A free stream of it is available at fubosportsnetwork.com.
Some on-demand streaming services have 4K video content, but no other streaming service carries live 4K channels. This advantage helps boost fuboTV’s claim that it’s the go-to streaming service for sports fans. You don’t need a 4K TV to view the 4K feeds, but they look a lot better if you do.
You can see a full channel list here.

fuboTV has apps for all the major devices that cord-cutters use. These include Chromecast, Roku, Amazon Fire TV and many others. There are no significant holes or weaknesses here.
You can learn more about fuboTV’s supported devices here.

You get only two streams when you get the cheapest plan, fubo Standard. With more streaming services starting their customers out with three streams, it might be time for fuboTV to be a bit more generous here.
You can learn more about fuboTV simultaneous streams here.

fuboTV is about average when it comes to recording features. The DVR’s maximum capacity is 500 hours, but you have to pay for the DVR upgrade to expand out to that number. The free version of the DVR comes with 30 hours of recording time.
You can learn more about the fuboTV DVR here.

Since fuboTV doesn’t come bundled with an on-demand service, you may have to rely on Netflix or some other similar service to fill in the entertainment gaps when nothing good is on. The on-demand vault is somewhat meager compared to what some of fuboTV’s competitors offer. The 72-hour Lookback feature comes in handy when you want to watch recently aired TV shows and sports programs, though.

MLB Network is also available through Sling TV— one of the first streaming pioneers that helped provide cable consumers with a more affordable way to watch their favorite live channels. Cost savings is its key advantage. Like all streamers, Sling TV has raised its prices several times over the past few years. It’s still relatively cheap compared to its competitors, though.

Sling TV’s channel plans are a bit mystifying at first glance. Instead of a single base plan, you can choose from two different sets of core channels: Sling Blue and Sling Orange. After you choose one of the base plans, you get customize your channel menu with various add-ons. The base plans are quite cheap relative to budget plans from other streaming services and you can pick up a discount if you get both.
* You get 1 stream for Sling Orange channels and up to 3 simultaneous streams for Sling Blue channels.
To learn more about Sling TV pricing, check here.

One of the strangest things about Sling TV’s system is the fact that its add-ons change depending on the base plan. For example, you get 15 channels with the Sports Extra add-on if Sling Orange is your base plan but only 10 if you opt for Sling Blue. MLB Network is one of the Sports Extra channels that you always get no matter which base plan you pick. Other sports channels that are available through the add-on include NFL Network, NBA TV, ESPNU, NHL Network, Olympic Channel, Strike Zone and Fox Sports 1.
To learn more about Sling TV channels, check here.

The DVR used to be one of Sling TV’s major weak points because you had to pay a monthly fee to unlock it and you couldn’t use it to record ESPN or any other Disney-owned channel. A recent upgrade changed that. Now, the DVR will record any channel and all Sling TV subscribers get ten hours of recording time. If you get the DVR upgrade, that number expands to 50 hours.
To learn more about Sling TV’s DVR, check here.

The small selection of movies that you get with Sling TV pales in comparison to Hulu, Netflix, HBO Now and other premium on-demand services. On the other hand, it does offer a large selection of VOD TV shows. Another nice thing about the on-demand vault is that it’s sorted by channel. You can pick your favorite channel, see what kind of VOD content is has to offer and pick out what you want to watch when nothing good is on live.
To learn more about Sling TV’s on-demand library, check here.

Google’s YouTube TV used to be extremely cheap, but a series of price hikes have made it nearly twice as expensive as it was at launch. On the other hand, its channel menu has grown progressively beefier as time has gone on. Another nice thing about this service is that you can record as much TV as you want with it. There is no restriction whatsoever on the number of hours of content you can save to the DVR. This, together with the fact that it comes with not only MLB Network but also ESPN and TBS, makes it one of the best streaming services you can buy if you’re a fan of pro baseball.

As is the case with most live TV-oriented streaming services, YouTube TV offers a one-size-fits-all base plan that encompasses all the major TV channel genres. Its price point is somewhat high compared to similar plans from other streamers. However, you don’t have to pay extra to gain access to MLB Network. The other streaming services that support MLB Network don’t include the channel in their base plans. Even though YouTube TV’s base cost is higher, you’ll pay about the same amount with other services once you get the required channel add-ons.
To learn more about YouTube TV’s pricing options, click here.

YouTube TV’s channel core channel menu has expanded by leaps and bounds. Initially consisting of only 40 channels in 2017, you now get over 85 channels when you subscribe. Various premium channel add-ons increase the amount of entertainment you get. In addition to MLB Network, you can also get ESPNU, ESPN, ESPN2, ESPNEWS and all kinds of other sports channels. Movie channels like Showtime, Starz, Epix and Cinemax are available as add-ons.
To learn more about YouTube TV’s channel list, click here.

YouTube TV lets you stream all its channels to up to three devices at once. That’s more than enough flexibility for most families. You probably won’t run into any “too many streams” error messages unless you share your account with a large group of friends.
To learn more about YouTube TV’s simultaneous streams, click here.

As mentioned above, YouTube TV’s unlimited DVR is one of its key market advantages. Most streaming services place a limit on the number of hours you can record, but YouTube TV does not. What’s more, each profile that you set up gets its own unlimited DVR.

How to Watch MLB Network on Amazon Fire TV

You can watch MLB Network on Amazon Fire TV with one of these streaming services: fuboTV, Sling TV, YouTube TV. Simply go to the Amazon Fire TV app store and click whatever live TV service appeals to you the most– or try them all.

How to Watch MLB Network on Roku

You can watch MLB Network on Amazon Fire TV with one of these streaming services: fuboTV, Sling TV, YouTube TV. The process of installing a Roku app is the same as installing a smartphone app. Just look up the app you want to try and complete the sign-up process to get going.

How to Watch MLB Network on Apple TV

You can watch MLB Network on Amazon Fire TV with one of these streaming services: fuboTV, Sling TV, YouTube TV. Apple’s app store has them all, so try them out for yourself and compare.