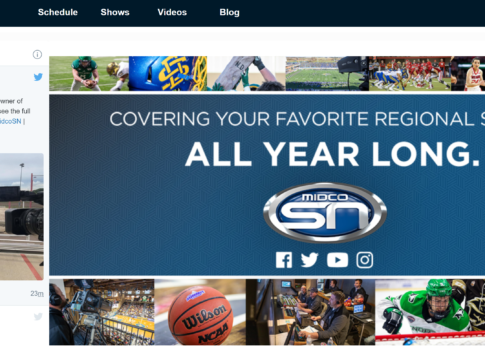 You can’t stream Midco Sports Network without cable because cable provider Midcontinent Communications has yet to sign a deal with any of the streaming services. In other words, there’s currently no way to stream the regional sports channel Midco Sports Network unless you subscribe to Midco. However, you may still want to consider checking out Hulu with Live TV, fuboTV, Sling TV, AT&T TV NOW or YouTube TV. All kinds of other great national and regional sports networks are available through these excellent TV apps. In this article, we’ll help you decide which streaming option is best for you. Let’s get started!

Thanks to its premium on-demand catalog, Hulu with Live TV offers one of the best streaming deals on the market. Midco Sports Network isn’t part of the lineup, but many other popular regional sports networks are.

Despite a few recent price hikes, Hulu with Live TV is still competitive when it comes to pricing.

One of the best things about this streamer is that it will let you share your account with as many people as you want. However, if you don’t get the unlimited streams upgrade you’ll only be able to stream to two devices at a time. Since the industry standard is three streams, that default limit is somewhat disappointing.

This category is one of Hulu with Live TV’s few weaknesses. You can record 50 hours of content, but you can’t fast forward unless you buy the DVR upgrade.

Few other streaming services that specialize in live TV can compete with Hulu with Live TV. That’s because you get full access to the main Hulu site when you subscribe.

Sports-oriented streamer fuboTV has good support for regional sports networks, as well. Midco Sports Network isn’t part of the channel lineup, but you can get lots of other great sports channels through this sports-oriented streamer. Now that the ESPN channels have finally been added to the lineup, fuboTV is a whole lot more competitive.

fuboTV’s pricing structure is all about features. The basic subscription plan has only basic features. To upgrade them, you can either switch to one of the more expensive plans or buy the feature upgrade separately. Some channel packs are available, as well.

You can’t get Midco Sports Network, but you can get a bunch of other regionals as well as niche sports channels that other streaming services don’t usually carry. fuboTV instantly became more competitive when it started carrying ESPN and lots of other Disney-owned channels in 2020.

Whether you own an Apple TV, Roku or one of the other popular streaming devices, odds are high that you’ll be able to use it to stream fuboTV. The company’s developers have designed apps for just about every major platform.

Along with the aforementioned Disney partnership, the other major thing that fuboTV did in 2020 was make its account sharing limitations a lot more flexible. Instead of two streams to start, you now get three. If that’s not enough, you can upgrade to five streams.

You start out with only 30 hours, which is slightly less than what other streamers offer. However, you can upgrade to 250 hours if you’re willing to pay an additional monthly fee. If you need more than that there’s a 1000-hour DVR upgrade that you can opt into instead.

There is some on-demand content, but the library looks unimpressive compared to Netflix, HBO Max and Hulu.

If you want to save money, Sling TV could be your best option. Though it doesn’t offer Midco Sports Network, it has all kinds of other excellent national sports networks. You could use it to fill in the gaps if you already subscribe to a streaming service that lacks some of the channels it has.

Customization sums up Sling TV’s approach to channel plans. Instead of offering a one-size-fits-all basic channel plan, you can select from one of two base plans: Sling Orange and Sling Blue. From there, you can customize your channel lineup by purchasing one or more add-on packs.

Sling TV hasn’t signed a deal to broadcast Midco Sports Network, and it probably never will. But if you’re looking for a cheap streaming service that offers ESPN, it might be your best option. The Sling Orange base plan comes with a handful of different ESPN channels. You can use it to watch ESPN3, which sometimes airs North Dakota and South Dakota regional sports action.

Sling TV’s simultaneous streaming policy is somewhat mixed up. You can only stream Sling Orange channels to one device at a time. Sling Blue channels can be streamed to three devices concurrently, though.

Sling TV’s DVR used to be horrible, but now it’s just mediocre. You start out with ten hours when you join. If you want more recording time, you can get a DVR upgrade that will boost you to 50 hours.

Since Sling TV doesn’t bundle a premium on-demand streaming service with its live TV plans, it’s about average in this category. The on-demand library contains a small selection of movies and lots of recently aired TV episodes.

AT&T’s AT&T TV NOW‘s major advantage over competing streaming services is HBO Max. HBO Max is the revamped version of HBO Go and HBO Now. It’s similar to Netflix and Hulu and it comes with AT&T TV NOW’s aptly named Max plan. Midco Sports Network is not a part of any of its plans, but several national and regional sports networks are available exclusively through this service only.

AT&T TV NOW’s Plus plan is competitive, but every other plan the streamer offers is pricey. However, the recent inclusion of HBO Max adds significant value.

Midco Sports Network is not a part of the lineup. However, several other hard-to-find regional sports networks are available through the Max plan.

The three-streams-at-a-time limitation puts AT&T TV NOW about even with the other streamers when it comes to account sharing.

All new subscribers now get 500 hours of recording time. That means that AT&T TV NOW is now a cut above the competition in this category.

AT&T TV NOW’s Plus plan doesn’t have much to offer when it comes to on-demand content, but the Max plan comes with HBO Max.

Unlimited DVR recording is one of YouTubeTV’s best features. Although Midco Sports Network isn’t a part of the menu, the local channel coverage YouTubeTV offers is quite good.

You can’t get Midco Sports Network. However, YouTube TV is one of the only streaming services that has local sports networks from both NBC and FOX.

The three-streams-at-a-time limit is the same restriction that most streaming services place on their users.

As mentioned earlier, the DVR is one of YouTube TV’s strongest features. You can use it to record as much TV as you like.

YouTube does make originals, but YouTube TV subscribers don’t get access to those. The on-demand catalog is average and primarily consists of recently aired TV shows.

You can watch all kinds of great sports channels on Amazon Fire TV with one of these streaming services: Hulu with Live TV, fuboTV, Sling TV, AT&T TV NOW or YouTube TV. Simply go to the Amazon Fire TV app store and click whatever live TV service appeals to you the most– or try them all.

You can watch many different sports channels on Roku with one of these streaming services: Hulu with Live TV, fuboTV, Sling TV, AT&T TV NOW or YouTube TV. The process of installing a Roku app is the same as installing a smartphone app. Just look up the app you want to try and complete the sign-up process to get going.

You can watch sports channels on Apple TV with one of these streaming services: Hulu with Live TV, fuboTV, Sling TV, AT&T TV NOW or YouTube TV. Apple’s app store has them all, so try them out for yourself and compare.