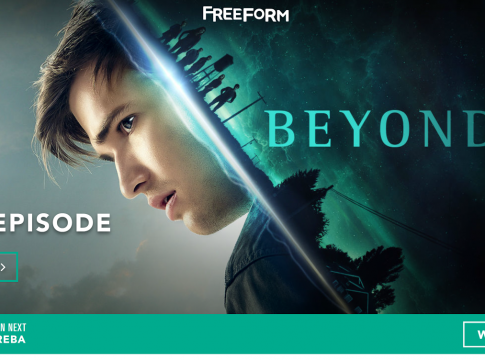 You can watch the Freeform live without cable with one of these streaming services: fuboTV, Hulu with Live TV, Sling TV, AT&T TV NOW and YouTube TV. In this article, we’ll help you decide which option is best for you.
Before we get going, why not check out our new live Freeform TV guide? It lets you quickly find out what’s currently playing as well as what’s up next. It’s how we were able to see that the original Jumanji movie from 1995 was playing at publication. If you’re not familiar with Freeform you can use our guide to figure out the type of programs that it normally airs. It’s all free and you don’t have to sign up with anything to access it.

When sports-oriented streamer fuboTV partnered with Disney earlier this year and added ESPN and several other Disney-owned channels to its menu, it fully established itself as a go-to service for sports fans. Since Freeform is a part of the new channels that it added, it’s also significantly more family friendly. A number of important feature upgrades landed on the service in 2020 as well.

fuboTV recently slimmed down its menu of subscriptions to two main options: fubo Family and fubo Elite. The Elite plan has all the feature upgrades and it also comes with a channel add-on pack called fubo Extra. If you want that pack but you don’t need the extra features, you can get it (or any of the other extra features) separately.

You can learn more about fuboTV’s subscription plans here.

Freeform is a part of the main channel lineup. That’s good news, because it means that you don’t have to buy any channel packs to get it. You get over 100 channels in all when you join. Various add-on packs let you get more. These include Sports Plus with NFL RedZone, fubo Cycling, International Sports Plus, Adventure Plus, Latino Plus, RAI Italia, TV5MONDE, Portuguese Plus, Entretenimiento Plus and fubo Extra.
You can see a full channel list here.

fuboTV has apps for all the major devices that cord-cutters use. These include Chromecast, Roku, Amazon Fire TV and many others. There are no significant holes or weaknesses here.

fuboTV used to be a bit behind here but the addition of a five-stream upgrade in 2020 changed that. Now that you can stream to up to five devices at the same time through one fuboTV account, this streamer is even more family friendly than it was at launch.

fuboTV used to be about average in terms of recording features, but another 2020 upgrade boosted the maximum recording limit to 1000 hours. The fubo Family plan comes with 250 hours, which is competitive compared to DVR plans from other streamers.

Since fuboTV doesn’t come bundled with an on-demand service, you may have to rely on Netflix or some other similar service to fill in the entertainment gaps when nothing good is on. The on-demand vault is somewhat meager compared to what some of fuboTV’s competitors offer. The 72-hour Lookback feature comes in handy when you want to watch recently aired TV shows and sports programs, though.

Sling TV pioneered streaming services years ago when it became one of the very first live TV services to offer an alternative to traditional cable.

There are two base plans you can choose from after you sign up for Sling TV: Sling Orange and Sling Blue. If you get both of the base plans you can get a discount, but if you get one you’ll pay half the price of a normal streaming service subscription. For a few dollars more per month, you can customize your entertainment lineup with Sling TV’s various add-on channel packs.

The plan you want to get if you want Freeform is Sling Orange. It has about 30 channels, including ESPN and many other Disney-owned networks.

When it comes to devices, Sling TV has good compatibility:

None of the Sling Orange channels can be streamed to more than one screen at a time. That could cause an issue if you intend on sharing your account. The limit for Sling Blue channels is three simultaneous streams.

One of the biggest feature upgrades to come to Sling TV in recent years was its DVR revamp. Instead of limiting the DVR to Sling Blue, it now works with Sling Orange. That means that sports fans can now record ESPN. You get only ten hours to start but you can boost that limit to 50 hours with a paid upgrade.

Like other streaming services that specialize in live TV, Sling TV does have a small selection of on-demand content you can watch anytime you want. Most of the titles are recently aired TV shows.

Hulu isn’t just an on-demand video service anymore, thanks to Hulu with Live TV. Once you sign up, you’ll get a variety of live TV channels as well as complimentary access to the main Hulu site.

The main subscription (which comes with live channels and Hulu) is the best subscription that Hulu with Live TV offers, but there are some other plans available that are cheaper. Check the link below for more details.

Though Hulu with Live TV doesn’t carry quite as many channels as some streaming service providers, it’s hard to find any weaknesses in Hulu with Live TV’s channel menu. There’s a little something for everyone. The news and sports lineups are particularly strong.

Hulu with Live TV has above average support for TV devices:

This streaming service has one of the most flexible features when it comes to account sharing. You can stream to an unlimited number of devices on your home network with a feature upgrade called Unlimited Streams.

Hulu with Live TV’s base DVR is somewhat limited. You can’t fast forward past commercials, for example. The Enhanced Cloud DVR upgrade unlocks fast forwarding and gives you 200 hours of recording time instead of 50.

AT&T TV NOW used to lag behind the other streaming services in many areas, but a series of upgrades have made it more competitive. It’s worth considering if you’re in the market for a streaming service that has Freeform.

AT&T TV NOW has six main plans, but features two of them: Max and Plus. Max comes with the new HBO Max on-demand service, hence the name. Plus is designed to compete with budget plans from other streaming services.

Whatever plan you get, you’ll be able to watch Freeform through AT&T TV NOW. The expensive plans are pricey but they come with channels that most other streaming services don’t carry.

AT&T TV NOW has apps for most of the devices that are popular among cord-cutters:

At launch, there were not recording features at all. Now, however, you can record up to 500 hours of programming. The 500-hour DVR comes with all the plans.

AT&T TV NOW has a 72-hour Rewind feature which is convenient for catching up with your favorite shows. The HBO Max on-demand service is robust and comparable to Netflix and Hulu.

YouTube TV recently raised its subscription rates. It’s not as cheap as it used to be, but it’s still a tempting deal because of its great support for local TV broadcast stations and excellent unlimited DVR.

Freeform is part of YouTube TV’s one-size-fits-all base subscription package. Unlike some streaming services, YouTube TV has excellent local TV station coverage. Because of this, there’s a big chance you’ll be able to stream your local ABC, CBS, NBC and FOX stations through the YouTube TV app if you subscribe.

Now that the YouTube TV app is back in the Amazon app store, YouTube TV has excellent TV device support:

YouTube TV’s has an unlimited cloud DVR. You don’t have to pay extra to use it, either.

How to Watch Freeform on Amazon Fire TV

You can watch Freeform on Amazon Fire TV with one of these streaming services: fuboTV, Hulu with Live TV, Sling TV, AT&T TV NOW and YouTube TV. Simply go to the Amazon Fire TV app store and click whatever live TV service appeals to you the most– or try them all.

How to Watch Freeform on Roku

You can watch Freeform on Amazon Fire TV with one of these streaming services: fuboTV, Hulu with Live TV, Sling TV, AT&T TV NOW and YouTube TV. The process of installing a Roku app is the same as installing a smartphone app. Just look up the app you want to try and complete the sign-up process to get going.

How to Watch Freeform on Apple TV

You can watch Freeform on Amazon Fire TV with one of these streaming services: fuboTV, Hulu with Live TV, Sling TV, AT&T TV NOW and YouTube TV. Apple’s app store has them all, so try them out for yourself and compare.