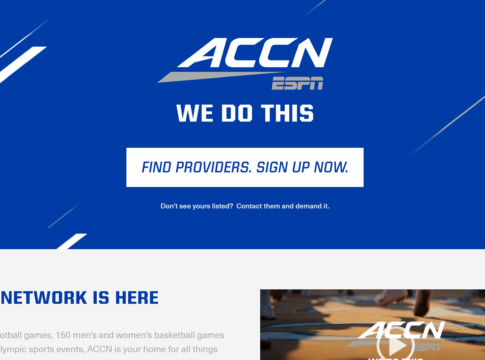 You can watch ACC Network without cable with one of these streaming services: Hulu with Live TV, Sling TV, AT&T TV NOW or YouTube TV. In this article, we’ll help you decide which streaming option is best for you. Let’s get started!

Hulu with Live TV combines streaming TV feeds with a very competitive mix of on-demand content. The fact that it’s owned by Disney may have given Hulu an edge over some competing services. Many popular TV shows appear on-demand on this streaming service before they land elsewhere.

The cost of Hulu with Live TV has risen significantly over the past several years but it’s still in the middle of the pack in terms of pricing. Some streaming services cost more, others less. Enhanced features raise the base price.
For more information about Hulu with Live TV’s plans, click here.

Instead of offering lots of different plans, Hulu with Live TV has opted to go with a single one-size-fits-all subscription. You get a variety of different live channel genres, ranging from lifestyle to news and more. In addition to ACC Network, other sports channels you get when you subscribe include CBS Sports, Big Ten Network, ESPN, ESPN2 and ESPNEWS– just to name a few.
Clickhere to see the full list of Hulu with Live TV channels.

This streaming service is the only one that offers unlimited simultaneous streaming. In other words, any number of people can use your account. Certain limitations still apply, though. One is that you have to pay an extra monthly fee if you want to unlock the unlimited streams. If you opt out of the feature expansion, you only get two streams. The industry average is three streams.
Click here to learn more about Hulu with Live TV’s simultaneous streams.

You don’t have to pay an extra fee to record live content. However, the basic DVR is somewhat limited. To expand on the default 50-hour limit, you have to get the DVR upgrade. Another limitation of the basic DVR is that it doesn’t let you fast forward through commercials.
Click hereto learn more about Hulu with Live TV’s DVR.

In terms of critical acclaim, only Hulu can compare to Netflix when it comes to original shows and movies. Emmy award winning The Handmaid’s Tale and Stephen King’s mind-bending time travel thriller 11.22.63 are just two of the great series that’s a part of its lineup. The fact that you get free access to these shows and many more when you join is one of the strongest advantages of this streaming service.

ACC Network is also available is through Sling TV. The grandfather of streaming services, Sling TV was one of the very first cable alternatives to come out way back in 2015. Because it was able to get a head start on the competition, it has more native apps for TV devices than its competitors. Sling also scores high in the flexibility department, thanks to its customizable add-on channel packs.

Like its competitors, Sling TV has raised its prices several times since its debut. However, those hikes came with improved features and expanded channel offerings. Sling TV is still one of the cheapest paid streaming service you can buy. The least expensive plans cost about half of what most other streaming services charge for their basic subscriptions.
* You get 1 stream for Sling Orange channels and up to 3 simultaneous streams for Sling Blue channels.
To learn more about Sling TV pricing, check here.

In order to get ACC Network, you’ll need to purchase the Sports Extra add-on pack and the Sling Orange base plan. This is important to note because the add-ons change depending on the base plan that you order. To put it another way: if you get Sling Blue with the Sports Extra pack, you won’t get ACC Network. Of course, you can always get both Sling Orange and Sling Blue. There’s a discount you can pick up if you get both base plans.
To learn more about Sling TV channels, check here.

Simultaneous streaming is one of Sling TV’s most notable weaknesses, thanks to its restrictive account sharing policies. The way the restrictions take effect can cause some confusion among new subscribers. All Sling Orange channels have a one-stream limit, while the Sling Blue channels can be streamed to up to three devices at once.
To learn more about Sling TV’s simultaneous streams, click here.

The recently improved Cloud DVR made Sling TV a bit more competitive in this area when it came out several months ago. Everyone automatically gets 10 hours of recording time when they join at no extra cost. That’s still slightly below average compared to what the other streaming services offer, but it’s much better than the original version of the feature. The initial Cloud DVR wasn’t compatible with Sling Orange and you had to pay to use it.
To learn more about Sling TV’s DVR, check here.

Like most streaming services that specialize in live TV, most of the on-demand content that you can get through Sling TV consists of recently aired shows. A small selection of movies is available, as well.

AT&T TV NOW‘s main advantage over competing streaming services is that some of the plans come with the recently released on-demand service HBO Max. HBO Max is somewhat similar to Netflix and Hulu in terms of the quality of the titles it offers. If you don’t already subscribe to an on-demand streaming service, you may want to give it a try.

AT&T TV NOW used to be one of the most expensive streaming services out there, but the recently revamped Plus plan brought its fees in line with the competition. The pricier Max plan is the one that comes with HBO Max.
*Note that AT&T TV Now offers several other plans that are hidden until you click to sign up.
For more information about AT&T TV NOW plans, click here.

The cheapest AT&T TV NOW plan (called Plus) comes with ACC Network, so that’s all you need to buy to get it. Other sports channels you get when you subscribe to it include ESPN, Fox Sports, NBC Sports Network and many others.
Click here to see the full list of AT&T TV NOW channels.

AT&T TV NOW is now even with most other streaming services when it comes to account sharing, thanks to its three-stream limit. Subscribers were limited to two streams when the service first came out.
To learn more about AT&T TV NOW’s simultaneous streams, click here.

The initial version of the AT&T TV NOW DVR maxed out at 20 hours, but a recent upgrade awarded 500 hours of recording time to new subscribers. The DVR boost gives the streaming service an edge over the competition in this area. 50 hours seems to be the industry standard.
Click here to learn more about how AT&T TV NOW’s DVR works.

If you get a plan that includes HBO Max, you’ll get a ton of on-demand content when you subscribe. You can watch every HBO original ever produced, along with a slew of content that’s only available via HBO Max. Friends, The West Wing, Anthony Bourdain’s Parts Unknown, all the The Lord of the Rings movies, all the movies that are a part of the DC cinematic universe and Sesame Street are streamable through HBO Max.

Last on this list but certainly not least, Google’s YouTube TV provides yet another way to watch ACC Network without cable. The unlimited cloud DVR and slick-looking interface are some of its main perks.

Around 70 channels come with YouTube TV’s base plan. You can add to the number of channels you get by purchasing subscriptions to various premium channels.
To learn more about YouTube TV’s pricing options, click here.

With YouTube TV, you get not only ACC Network but also ESPNU, but also ESPN, ESPN2, ESPNEWS and many other channels that fall into the sports genre.
To learn more about YouTube TV’s channel list, click here.

YouTube TV’s has an unlimited cloud DVR that lets you record as much TV as you want.
Click here to learn more about YouTube TV’s DVR options.

How to Watch ACC Network on Amazon Fire TV

You can watch ACC Network on Amazon Fire TV with one of these streaming services: Hulu with Live TV, Sling TV, AT&T TV NOW, YouTube TV. Simply go to the Amazon Fire TV app store and click whatever live TV service appeals to you the most– or try them all.

How to Watch ACC Network on Roku

You can watch ACC Network on Amazon Fire TV with one of these streaming services: Hulu with Live TV, Sling TV, AT&T TV NOW, YouTube TV. The process of installing a Roku app is the same as installing a smartphone app. Just look up the app you want to try and complete the sign-up process to get going.

How to Watch ACC Network on Apple TV

You can watch ACC Network on Amazon Fire TV with one of these streaming services: Hulu with Live TV, Sling TV, AT&T TV NOW, YouTube TV. Apple’s app store has them all, so try them out for yourself and compare.