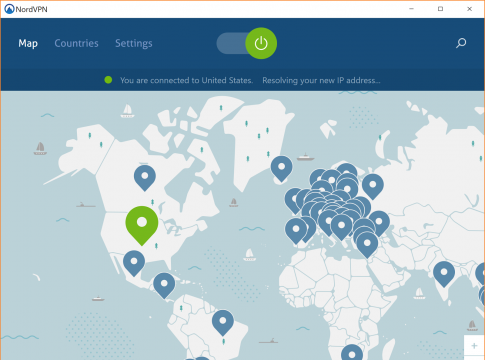 ExpressVPN is the best VPN for American Netflix, hands down. The main feature that makes it stand out is consistency. ExpressVPN’s technical team is always going out of their way to make sure that ExpressVPN customers can get to American Netflix. They’ve even set aside several servers to meet the specific needs of geo-hoppers.

In order to find out which ExpressVPN servers to use, just sign up and contact customer support.

When I messaged ExpressVPN support, a representative quickly gave me the option of choosing a west coast or an east coast American server. After connecting to the east coast server, I was able to successfully load an episode of The Walking Dead.

The ExpressVPN client is intuitive and a cinch to use. The design of the interface is built around a giant off/on button. The three horizontal lines on the top left part of the interface open up a settings menu, which allows you to do some basic things like switch between different VPN protocols.

The last time I tried to use ExpressVPN to access Netflix a few years ago, it worked but it was a bit slow. This time, however, performance very fast– so now it’s my top pick.

What’s Going On with Netflix, Anyway?

If you’re an American living or traveling overseas, you might not be pleased with what you see when you open your laptop and pull up Netflix.

If you visit Mexico, for example, you’ll be limited to watching 592 shows and 2406 movies while you’re there according to Finder. Other Netflix regions have even less. Netflix subscribers located in Thailand are limited to 94 TV shows and 210 movies.

To put those figures in perspective: the American Netflix catalog currently includes 1157 TV shows and 4593 movies.

The reason why some Netflix subscribers get more content than others boils down to licensing issues. Netflix has deals with international TV show and movie distributors. These deals require Netflix to block certain titles. To overcome these pesky license blocks, Netflix subscribers outside the US often rely on VPN service providers.

In 2016, Netflix decided to try to block all VPN users. The decision attracted a great deal of criticism around the web.

VPN supporters argued that Netflix’s crackdown was unfair because there are many good reasons to use a VPN that don’t include region-hopping. VPNs provide not only excellent privacy, but also an extra layer of security that can defend against public WiFi hacks that anti-virus software can’t block.

VPN providers still have many tools at their disposal that allow them to help their customers overcome Netflix’s VPN filters. For example, VPN providers can use data obfuscation technology to help their subscribers blend in with non-VPN users.

Additionally, VPN services can rotate their servers’ IP addresses around on a routine basis. IP address rotation is an effective strategy for overcoming filters because Netflix relies on IP addresses to identify and block out VPNs. If VPN services alter their IP addresses regularly, they are much more difficult to filter.

Why I Use VPNs With Netflix

I’m an American living in Budapest, Hungary. My location is often a problem when I pull up Netflix, because the Hungarian version of Netflix is extremely limited.

The price I pay for Netflix access remains the same no matter where I go. But without a VPN, I can only access 171 TV shows and 548 movies when I’m in Hungary.

Titles that appear when I’m visiting family in the US — like The Walking Dead, for example — do not show up at all when I search for them without a VPN.

After I connect to a VPN that works with Netflix, I can access not only The Walking Dead but also thousands of other blocked Netflix titles.

In order to see which of the major VPNs still work with Netflix, I tried out a few different popular VPN brands. ExpressVPN was the best overall, but several others worked as well.

First, I signed up with all 5 services. Then, I tried out each one using my Windows 10 PC to find out whether or not I could successfully load an episode of The Walking Dead.

Here are the results of the test.

StrongVPN is the VPN service I use all the time, and it’s the VPN we usually recommend to our readers here at Flixed.io.

After I pulled up StrongVPN and connected to a New York server, I was able to load the The Walking Dead without any issues.

Once of the best things about StrongVPN is that it’s very easy to use. StrongVPN works right away. After you install the StrongVPN client, you don’t need to make any special settings changes to get to American Netflix.

Just pick out a payment plan, create an account and download the client. Then, sign in and pick out an American server. Once you’re connected, you’re good to go.

Even though IPVanish is fast, it’s not a good VPN provider to use for accessing American Netflix.

Though The Walking Dead did appear as an option when I tried to search for it while connected to IPVanish, I ran into this error message when I attempted to actually play an episode:

Even after opening up my IPVanish client’s settings menu and checking the “Obfuscate VPN Traffic” box, I still couldn’t unlock Netflix’s American catalog. I tried switching protocols too, but that didn’t work either.

IPVanish has a large network of high-powered servers. However, the fact that you can’t seem to use IPVanish to access American Netflix abroad puts IPVanish at a disadvantage.

I don’t have much personal experience using NordVPN, but it does seem to work pretty well with Netflix. NordVPN’s client is quick and responsive and features an elegant design.

If you dig around in the NordVPN client’s settings menu, you’ll find some intriguing features that most VPN clients lack.

Through NordVPN, you can connect to “specialty servers” that are custom designed to handle specific kinds of web traffic. For example, there’s an option to connect to a “Double VPN” network. Double VPN allows you to hide your activity behind two interconnected VPN servers. The first server in the chain redirects your traffic to a second server, adding additional layers of privacy and security.

You probably won’t need to use Double VPN or any of the other specialty VPN servers if all you want to do is get to American Netflix. However, if Netflix ever changes the way it filters VPN connections, those extra configuration options may prove to be useful.

For example, in the advanced section of the NordVPN client’s settings menu there is a toggle switch that allows you to turn on obfuscation.

I was able to get into American Netflix without having to switch on obfuscation. However, if more people start using NordVPN to bypass Netflix’s geo-filter, Netflix may attempt to filter out NordVPN IP addresses. If that happens, NordVPN subscribers may have to start turning on obfuscation in order to avoid detection.

One big advantage NordVPN has over most VPN providers is its 3-day trial. You don’t have to give out your credit card number to begin using NordVPN. This makes it very easy to see if NordVPN works for you or not.

Along with its credit card free trial period, another thing that sets NordVPN apart is its cheap long-term subscription plans. If you pay for two years up front, you can shave 72% off your monthly cost.

VyprVPN is a no-frills VPN service that provides an easy way to access American Netflix abroad. The $60 yearly subscription ranks VyprVPN as one of the cheaper options out there.

In addition to the VyprVPN’s standard subscription, there’s also an upgrade called VyprVPN Premium. The main difference between VyprVPN and VyprVPN Premium is “Chameleon Protocol” – a VPN mode that’s supposed add extra privacy and anonymity. VyprVPN Premium has Chameleon, but VyprVPN does not. Also, VyprVPN Premium allows 5 simultaneous connections. With VyprVPN, you get 3.

If all you want to do is access American Netflix every now and then, the vanilla version of VyprVPN is the most logical choice. You don’t need VyprVPN Premium’s Chameleon mode to unlock US Netflix content. The standard VyprVPN subscription will do.

I don’t have much personal experience using VyprVPN, so I’m not sure how reliable it is. However, the fact that it’s inexpensive and easy to use makes VyprVPN an attractive option.

The main thing that I liked about VyprVPN when I tried it out was that it seemed quite fast. Netflix video picture quality started out low, just like it always does when I use a VPN to access Netflix. However, it didn’t take long for the resolution to step up to HD.

What’s the Best VPN for Netflix?

The answer, of course, depends on your priorities. Here’s a quick breakdown.

The most reliable VPN for Netflix…

I personally can vouch for StrongVPN because I use it all the time to access American Netflix from Budapest. StrongVPN delivers good quality streaming video and I’ve had nothing but good experiences with their support team.

The cheapest VPN for Netflix…

If you don’t want to commit to a long-term plan and you’d rather pay month-to-month service, all the VPNs mentioned above are pretty much the same. You have to shell out $12 for a monthly subscription to ExpressVPN or NordVPN, but the rest charge the industry standard fee: $10.

If you’re willing to pay for several years of VPN access in advance, NordVPN is far and away the least expensive option covered above. $100 will buy you 3 full years of NordVPN service. The next cheapest long-term subscription is VyprVPN, which has a $60 yearly plan.

The most advanced Netflix VPN…

You don’t need to adjust any NordVPN settings to access American Netflix. The default setting works just fine. However, if Netflix ever upgrades the way it filters out VPN subscribers, NordVPN’s extra features could prove to be useful. The first time I tried NordVPN years ago, its client was super simple. Now, NordVPN lets you connect to servers that are optimized for P2P traffic, plus you can turn on Double VPN, link to Onion Over VPN, and more.

The Netflix VPN with the best free trial…

NordVPN wins this category, too. All the other VPN providers that I reviewed force you to give out your payment info when you sign up for a trial, but NordVPN does not.