If you live in Canada, you pay the same amount for Netflix as Americans – but you don’t get as much content. The good news is that you can still access American Netflix if you follow the instructions listed below. Read on to find out how to unblock American Netflix in Canada using a VPN.

The best way we’ve found to unblock American Netflix in Canada is with the VPN known as StrongVPN. StrongVPN is VPN app that lets you log into the web from a variety of different virtual locations. All you have to do is sign up for StrongVPN, download the app, then pick an American city. Once you’ve connected, you’ll see the American Netflix catalog next time you log into Netflix. When you want to switch back to Canadian Netflix, just disconnect and reload your browser. It’s as simple as that!

How to fix Netflix proxy errors

If you’ve ever tried to use Netflix with a VPN, you may have gotten a proxy error when you tried to load Netflix. That happens because Netflix has gotten better at detecting VPN use. To avoid this error, you can turn on StrongVPN‘s scramble mode. To switch on scramble mode, just click the “Advanced” button and then select the “Options” tab. Change the setting from disabled to enabled, then reload Netflix.

The Best VPN to Use to Unblock American Netflix

As mentioned above, we’ve found that StrongVPN works quite consistently when it comes to adapting to Netflix’s ever-evolving VPN blockade. Additionally, it has apps for Android and iOS so that you can get American Netflix on your mobile devices as well.

The StrongVPN app consists of a simple interface, which guides you through the process of finding a VPN server. Connecting only takes a few seconds and once you’re in you’ll be able to access all the Netflix titles that are available to people living in the USA.

When you need to get into American Netflix, you can just pull up the StrongVPN app, pick an American VPN server, and activate obfuscation mode. When you log into Netflix, you should see the American catalog. That’s all there is to it!

In case you’ve never used a VPN before, here’s a step-by-step view of how to use StrongVPN.

The first thing you have to do to get StrongVPN is sign up for an account.  You can pick from several different membership packages.

Tip: If you sign up for a yearly plan, you’ll get a discount on the per-month price you pay. It’ll work out to you getting two months of the year for free.

After sign up, StrongVPN will automatically send you your login credentials via email.  Your first password will be randomly generated, but you can always change it to something that’s easier to remember later on. 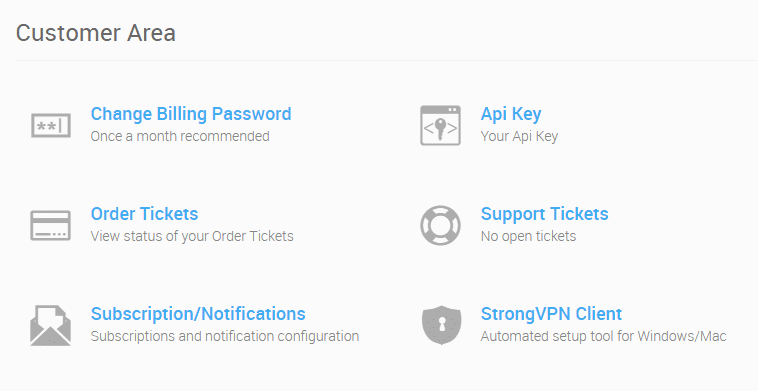 Step 5: Select any United States server from the server list

It’s a good idea to start with the server that’s closest to your location.  If you live in Ottawa, try out one of StrongVPN’s NYC servers first.  If you notice any lagging, switch your server to a different one and reconnect.

Once you’ve connected to a StrongVPN server, you the blue “Connect” button will turn into a red “Disconnect” button.

Once you’re in, pull up Netflix and you’ll be able to look up and watch titles that weren’t there before.

When Netflix subscribers started using VPNs to gain access to other Netflix markets, Netflix cracked down and tried to ban all VPNs. If Netflix’s servers detect that you’re using a VPN, you won’t be able to watch any movies and you’ll run into the “whoops, something went wrong” error message every time you hit the play button.

Fortunately, some VPN providers have developed work-arounds that allow their subscribers to use VPNs with Netflix.

However, in recent months Netflix has gotten better at detecting VPN usage.

There are numerous ways that a VPN service can let its subscribers get past Netflix’s “whoops” screen, but there’s nothing you can do as a user. Your VPN service’s administrators have to make changes on their end to resolve the issue.

Some VPN services adapt quickly when their subscribers report Netflix problems, but others drag their feet – or do nothing at all.

Try Out StrongVPN Yourself

According to StrongVPN’s FAQ page, you can get your money back if you aren’t satisfied for any reason.

Once you get a StrongVPN account, just log in and verify for yourself that you can get to American Netflix.  If there are any problems, you can just cancel and get your money back.

How Does StrongVPN Work?

Netflix uses “geo-blocks” to separate its American users from its Canadian users.  StrongVPN overcomes the geo-block by changing your IP address so that it appears as if you’re located in the United States.

IP addresses in a nutshell

Every machine on the Internet has a unique IP address.  Computers can’t communicate without them.  IP addresses help information flow from point A to point B.

If you try to load the Netflix page from a computer that has a Canadian IP address, you get funneled into Canadian Netflix. When you use StrongVPN to obtain American IP address, it looks like you’re located in America from the perspective of Netflix’s servers.

Works on iOS and Android, Too

In addition to Mac and Windows, StrongVPN works on Android and Apple mobile devices. You can also use StrongVPN on Ubuntu, Kodi, Amazon Kindle, Bada, HP webOS and Chromium OS / Google Chrome OS.

Once you install the StrongVPN app, the process for getting into American Netflix is the same. Just pick a US server and connect, then open up Netflix and enjoy.

One of the Oldest VPN Providers

There are many different VPN services that claim to help Canadians get access to American Netflix.  However, not all of them are safe– and some of them don’t even work at all.

StrongVPN, on the other hand, has been around since 1995.  They’ve received reviews from legitimate news organizations like TechRadar, The Sydney Morning Herald, PC Tech Magazine, Irish Times, Hong Kong Free Press and many more.

“By using StrongVPN’s proxy, your account is rendered essentially invisible to your ISP.” – TopTenreviews

If Netflix isn’t enough entertainment for you and you’re in the market for another streaming service, we recommend that you start with Disney Plus and ESPN+. ESPN+ is ordinarily only available in America, but that’s the great thing about StrongVPN— it gives you access to nearly all the streaming services that are ordinarily only available in the United States.

When Disney+ finally arrived a few months back, it shook up the streaming service marketplace. It may be worth checking out if you’re a fan of any of the intellectual properties that Disney owns. Disney holds the rights to the Star Wars franchise, Pixar films, Marvel super hero flicks and more.

Disney Plus is available through 2 different subscription packages:

You get four streams when you subscribe. That’s one stream more than the industry average. However, there’s a small catch to be aware of: if you subscribe to Disney+ through the Disney+/Hulu/ESPN+ bundle, you’ll only get one stream.

You won’t need a DVR when you use Disney+ because there are no live channels to record.

If you are a fan of National Geographic documentaries, the Star Wars franchise, Marvel or Pixar, you’ll enjoy what Disney+’s on-demand library has to offer in the way of content.

Most streaming services that offer live sports entertainment are pricey. ESPN+ is the exception to that rule. The monthly fee is only a few dollars. However, there’s a small catch: it’s not officially available in Canada. However, you can use ExpressVPN to switch your virtual location to the United States, and this will give you the ability to try it out.

The low monthly fees are one of ESPN+’s core benefits.

If you have a full-featured streaming service that carries ESPN, you can use it to unlock ESPN+ and watch various ESPN channels through it. People that only subscribe to the base plan can only stream ESPN+ content.

ESPN’s app is in most app stores.

All subscribers get three simultaneous streams.

Currently, ESPN+ doesn’t offer any type of recording feature. Instead, it makes its most popular sports events available as on-demand content after the match ends.

Along with live sports streams, you also get access to various ESPN sports documentaries and news show episodes when you subscribe.

Get More Info About American Netflix

This blog post shows every film that was in the American and Canadian Netflix databases at the end of October.  Allflicks is also a good source of information.