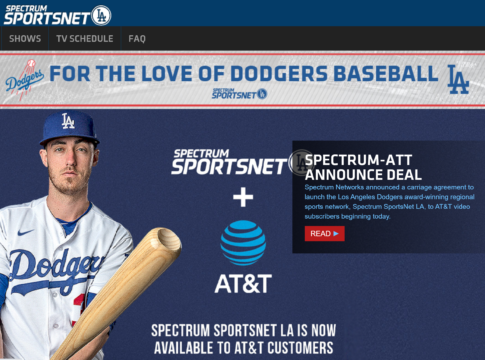 The only way to watch Spectrum SportsNet live without cable is via AT&T TV NOW. Hulu with Live TV, fuboTV, Sling TV and YouTube TV don’t carry Spectrum SportsNet, but you may want to check out their free trials anyway because they carry lots of other great sports channels. In this article, we’ll help you decide which streaming option is best for you. Let’s get started!

As mentioned in the intro, AT&T’s AT&T TV NOW is the only streaming service that has managed to seal a deal to carry Spectrum SportsNet. That gives it a key advantage over its competitors. Beefed up recently with improved features and the new on-demand streaming service HBO Max, AT&T TV NOW looks a whole lot different than it did when it first emerged on the scene.

AT&T TV NOW does offer a stripped down budget plan, but all the other plans cost about the same as what you’d pay for a regular cable service. The newly updated features and the addition of HBO Max add value, though.

Since the budget-oriented Plus plan doesn’t come with Spectrum SportsNet, you’ll need to upgrade to Max to get it if that’s your priority. Max is somewhat pricey compared to other streamers that offer a similar bundle of channels. However, the fact that Max comes with HBO Max is a significant benefit.

You now get three streams for sharing your account when you join. That’s an upgrade from the previous limit, which was two streams with an option to upgrade to a third.

You can now record a full 500 hours worth of content to the DVR. The expanded recording limit places AT&T TV NOW near the top of the list in this category.

The new on-demand service HBO Max comes with the Max plan. It gives you access to not only exclusive HBO Max originals but also every HBO movie and TV show ever made.

Hulu with Live TV doesn’t support Spectrum Sports. However, it has lots of other great sports channels. Another nice thing about it is that it comes with the Hulu on-demand service.

This streamer is about average when it comes to pricing. Other cable alternatives offer lower price points, but the strong channel lineup and on-demand content helps Hulu with Live TV stay competitive.

From one perspective, Hulu with Live TV is tops in this department because no other streamer has an unlimited streams option. On the other hand, if you don’t buy the unlimited streams upgrade you get stuck with only two streams.

The DVR has a maximum capacity of 200 hours. But to get 200 hours, you need the DVR upgrade. 50 hours is the default limit. Another important thing to mention here is that a key DVR feature is not available to those who opt to stick with the free recording features: fast forwarding. Without a fast forward button, you’ll have to sit through all the commercials you record using the free DVR.

As its name suggests, Hulu with Live TV comes with the Hulu on-demand service. This gives it a unique edge over most live streaming services, which typically only offer basic on-demand content.

fuboTV doesn’t have Spectrum SportsNet either. Nevertheless, you may still want to check it out. You can get several sports channels that most streaming services don’t carry. fuboTV made some big changes in 2020 that made it more competitive in relation to toher streamers.

Spectrum SportsNet is not available, but don’t let that stop you from at least seeing what this underrated streamer is all about. Half the channels you get with fubo Standard are sports channels. The other half is a blend of family, news and lifestyle channels. Several premium movie channels are also available.

The creators of fuboTV have made apps for just about every major streaming hardware platform, including Apple TV, Roku and many other devices.

fuboTV now offers support for up to five simultaneous streams. In other words, you can stream to five different devices at the same time with one account. You’ll need to get either the fubo Elite plan or the standalone five-stream upgrade to enjoy that flexibility. Without the upgrade, you get three streams.

fubo Family comes with 250 hours, which is probably enough time for most people. If that lack of recording flexibility proves to be a problem, you can choose between the 500 or 1000-hour DVR upgrades.

There’s not a whole lot to mention here. There are some movies in the on-demand library, but not many. On the other hand, the Lookback feature is convenient because it lets you view recently broadcast content for up to 72 hours after it airs.

Spectrum Sports is not available through Sling TV, either. However, it’s the cheapest way to get ESPN without cable. You may want to give it a try if you’re breaking away from cable and you’re only care about a few channels.

Sling TV’s marketing team advertises a-la-carte customization, but that’s somewhat misleading. You have to pick from one of two different stripped down base plans (Sling Orange and Sling Blue) before you can flesh out your TV lineup with various channel add-on packs.

Sling TV has yet to iron out a deal to carry Spectrum SportsNet. However, the Sling Orange base plan is a pretty good deal for people that want to get rid of their cable company while maintaining access to ESPN. The Sports Extra add-on pack is inexpensive and offers a competitive mix of additional sports channels.

You get only ten hours to start out with. If you need more time, you can upgrade the DVR and get 50 hours.

Sling TV is average in this category. Like most other live-TV oriented streamers, most of the content consists of recently aired programs. There are no exclusive originals and the movie selection is small.

YouTube TV doesn’t have Spectrum SportsNet. What it does have is an unlimited DVR feature and great support for local TV channels.

Historically, YouTube TV has always offered low monthly fees. A series of recent hikes changed that and now YouTube is nearer to the top of the list when it comes to cost.

You can’t get Spectrum SportsNet, but you can get local sports networks from both NBC and FOX. Most other streamers carry only one or the other.

YouTube TV scores above average marks here. Rather than two streams with an option to upgrade, you get three streams by default.

As mentioned in the intro, YouTube TV’s unlimited DVR is one of its main competitive advantages.

YouTube does produce originals, but for whatever reason it doesn’t include these with YouTube TV. You have to subscribe to a separate service called YouTube Premium to watch those. The on-demand vault is similar to what other live TV-oriented streamers offer with their services.

You can watch all kinds of great sports channels on Amazon Fire TV with one of these streaming services: AT&T TV NOW, Hulu with Live TV, fuboTV, Sling TV or YouTube TV. Simply go to the Amazon Fire TV app store and click whatever live TV service appeals to you the most– or try them all.

You can watch many different sports channels on Roku with one of these streaming services: AT&T TV NOW, Hulu with Live TV, fuboTV, Sling TV or YouTube TV. The process of installing a Roku app is the same as installing a smartphone app. Just look up the app you want to try and complete the sign-up process to get going.

You can watch sports channels on Apple TV with one of these streaming services: AT&T TV NOW, Hulu with Live TV, fuboTV, Sling TV or YouTube TV. Apple’s app store has them all, so try them out for yourself and compare.