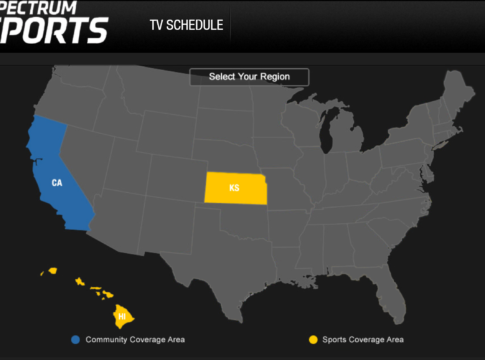 Unfortunately, none of the regional Spectrum Sports channels are available through any of the major American streaming services. That’s probably because Spectrum Sports is owned by Charter Communications, the second-largest cable provider in the United States. Despite this, you may still want to consider checking out Hulu with Live TV, fuboTV, Sling TV, AT&T TV NOW or YouTube TV. All five streamers have a lot to offer sports fans– and you can sign up for free trials of each one, as well. In this article, we’ll help you decide which streaming option is best for you. Let’s get started!

Hulu with Live TV is an above-average streaming service with excellent features and a competitive lineup of channels. The addition of complementary access to Hulu is another strong benefit. Spectrum Sports may not be a part of its lineup, but it has a very strong selection of other regional sports networks you can watch instead.

Several recent price hikes hasn’t made Hulu with Live TV less competitive relative to its rivals. All the streamers have increased their prices over the past several years.

You won’t get Spectrum Sports, but Hulu with Live TV has signed deals to carry all of Fox’s regional sports networks. NBC’s regional sports networks are also included with the base channel package. Since the exact local channels you get will vary depending on where you’re located, be sure to check the Hulu with Live TV website first before you join so you’ll know exactly which channels you’ll get.

The DVR caps out at 200 hours, which isn’t bad relative to what other streamers offer in terms of recording features. However, if you opt out of the upgrade you’ll get 50 hours and you won’t be able to fast forward through commercials.

Sports-oriented streamer fuboTV doesn’t carry Spectrum Sports either, but like Hulu with Live TV, it also has decent support for regional sports networks. It’s the only streaming service that carries AT&T SportsNet Southwest. Fox’s regional sports networks aren’t part of the picture, but NBC’s are. fuboTV became a lot more competitive in 2020 when it added all the ESPN networks and several other Disney-owned channels to its menu.

fuboTV recently reorganized its subscription options. Instead of having a whole bunch of them, there are now only two main ones: fubo Family and fubo Elite. Family is pared down relative to Elite, which comes with a whole bunch of feature upgrades and the fubo Extra channel add-on pack. There’s also a fubo Latino plan for Spanish speakers.

As is the case with all the other streamers, fuboTV doesn’t carry any of the Spectrum Sports local channels. However, if you’re a sports nut you’ll definitely want to get a free trial of fuboTV if you haven’t done so already. It’s a streaming service that is all about sports. This is evident from the fact that half of the channels contained in the base channel pack are sports channels.

fuboTV’s development team has created apps for all the major streaming hardware platforms including Apple TV, Roku and many other devices.

Not long ago fuboTV was lagging behind in this category, but it has since caught up. Instead of starting out with two streams with an option to upgrade to three, you now get three streams by default. A five-stream upgrade adds flexibility for families. Only a few other streaming services offer more than three streams.

fuboTV’s entry-level plan comes with 30 hours of recording space. You can upgrade to either 250 or 1000 hours, depending on what your recording needs look like.

fuboTV is about average compared to other live TV-oriented streaming services when it comes to the number of on-demand titles that it has. Most of the content consists of recently broadcast TV show episodes.

Spectrum Sports is not available through streaming pioneer Sling TV and it doesn’t offer great coverage when it comes to other regional sports networks, either. However, Sling TV is still worth mentioning here because it’s one of the least expensive streaming services on the market. It’s also one of the only streamers that carries Longhorn Network, the Texas Longhorns’ TV home.

Customization is the name of the game when it comes to Sling TV’s subscription structure. You first pick from one of two base plans, then select which channel add-ons you want when you subscribe.

Sling Orange channels can’t be simultaneously streamed at all, which is somewhat strange because Sling Blue channels can be streamed to three devices at the same time.

50 hours is the maximum amount of recording time that you can get. You start out with ten hours for free and you can upgrade if you need more flexibility.

Sling TV’s on-demand library is quite large for a live TV-oriented streaming service, but it doesn’t compare to Hulu, Netflix, HBO Max and other premium on-demand services.

AT&T TV NOW’s plans are pricey compared to other streaming services. They do offer a budget plan that compares with other services’ low-cost plans, though.

You get three streams when you join. That puts AT&T TV NOW slightly ahead of the pack in the account sharing department.

A recent upgrade to the DVR made AT&T TV NOW more competitive here. You can now record up to 500 of hours.

YouTubeTV sports a slick interface and unlimited DVR and best-in-class local channel support. Spectrum Sports is unfortunately not part of the lineup, but many other regional sports networks are.

YouTube TV was about even with other streaming services in terms of price until a recent price hike.

Spectrum Sports is not available. On the plus side, YouTube TV is one of the only streaming services that carries local sports networks from both NBC and FOX.

You get three simultaneous streams, which puts YouTube TV about even with the competition here.

YouTube TV DVR The DVR lets you save as much content as you want. No other streaming service offers that much storage.

YouTube TV is average when it comes to on-demand content. Most of the library consists of recently aired TV shows.

You can watch all kinds of great sports channels on Amazon Fire TV with one of these streaming services: Hulu with Live TV, fuboTV, Sling TV, AT&T TV NOW or YouTube TV. Simply go to the Amazon Fire TV app store and click whatever live TV service appeals to you the most– or try them all.

You can watch many different sports channels on Roku with one of these streaming services: Hulu with Live TV, fuboTV, Sling TV, AT&T TV NOW or YouTube TV. The process of installing a Roku app is the same as installing a smartphone app. Just look up the app you want to try and complete the sign-up process to get going.

You can watch sports channels on Apple TV with one of these streaming services: Hulu with Live TV, fuboTV, Sling TV, AT&T TV NOW or YouTube TV. Apple’s app store has them all, so try them out for yourself and compare.