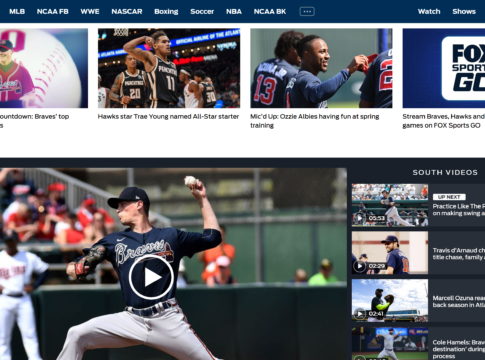 The only way to watch Fox Sports South without cable is with AT&T TV NOW. In this article, we’ll give you an overview of the streamer and list some of its pros and cons.

Before we start, we want to highlight a particularly relevant stream for news, sports, and entertainment. Sling TV is one of the best options for streaming in 2021 with a rich catalogue of 50+ live channels and 50k+ on-demand movies and episodes.

Get $10 off your first month. Try Sling TV today.

When AT&T TV NOW first debuted as DirecTV Now, we wondered where it fit into the market for streaming services. Its features weren’t impressive and the fluctuating prices added to our confusion. From the looks of the most recent changes, AT&T’s cable alternative seems to have matured. One of the biggest features that it brings to the table is the HBO Max on-demand service, which comes bundled with the aptly-named Max plan. It’s a pricey plan, but offers tremendous value.

One of the things about AT&T TV NOW that often left us scratching our heads was the prices that the service attached to its subscription plans. While many of the plans still cost about the same as a standard cable subscription, the newly-revamped Plus plan has helped make AT&T TV NOW a bit more competitive. It costs about the same as what other streaming services are charging for their budget-oriented plans.
*Note that AT&T TV Now offers several other plans that are hidden until you click to sign up.
For more information about AT&T TV NOW plans, click here.

AT&T TV NOW’s Max, Choice, Xtra, and Ultimate packages all come with Fox Sports South and other regional sports networks. This makes the streaming service even more competitive, since all its competitors (Sling and fuboTV, for example) recently dropped support for RSNs. CBS Sports Network, Fox Sports 1, Fox Sports 2, NBA TV and TyC Sports are some of the other sports-related channels that AT&T TV NOW supports.
Click here to see the full list of AT&T TV NOW channels.

Account sharing is yet another area of AT&T TV NOW that has seen a big improvement since the service first debuted. At first, you could only stream to two devices at once. A recent upgrade boosted that limit to three devices, bringing AT&T TV NOW up to par with the industry standard. Some streaming services offer more flexibility in this category, others less.
To learn more about AT&T TV NOW’s simultaneous streams, click here.

The initial version of AT&T TV NOW didn’t have any recording features at all. Then, a 20-hour DVR came out. That limit was boosted to 500 hours several months ago. Since most streaming services offer about 50 hours of recording time, AT&T TV NOW is now ahead of the pack when it comes to DVR time.
Click here to learn more about how AT&T TV NOW’s DVR works.

HBO Max puts AT&T TV NOW in the same category as Hulu with Live TV. The Max plan includes free access to the on-demand service after which it is named. The fact that you get full access to every HBO series and movie ever made is a big advantage. The only problem with Max is that it’s somewhat expensive compared to Hulu with Live TV.
If you aren’t familiar with HBO Max, you may want to check out the free trial of it especially if you don’t already have an on-demand streaming service. The makers of HBO Max have secured the right to stream a large number of hot titles, like Friends, Rick and Morty, The Big Bang Theory, and South Park. A number of interesting originals are either currently available or on the way, as well. These include Dune: The Sisterhood, The Green Lantern, a Perry Mason reboot, Looney Tunes Cartoons, Craftopia and The Not Too Late Show With Elmo.
Related: HBO Max Review 2020 – HBO’s Deep Content Vault Is Its Crown Jewel

How to Watch Fox Sports South on Amazon Fire TV

You can watch Fox Sports South on Amazon Fire TV with AT&T TV NOW. Just go to the app store and get the AT&T TV NOW app. You can try it out for free if you haven’t used up your trial yet.

How to Watch Fox Sports South on Roku

You can watch Fox Sports South on Amazon Fire TV with AT&T TV NOW. The process of installing a Roku app is the same as installing a smartphone app.

How to Watch Fox Sports South on Apple TV