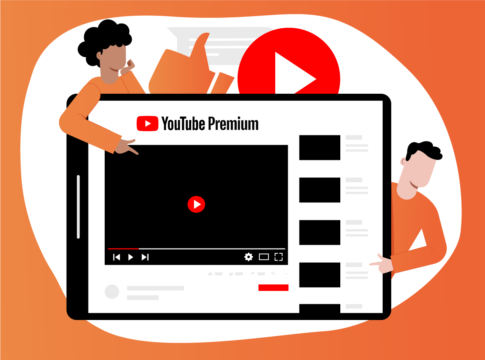 Since its infancy, YouTube Premium has struggled to firmly place its identity. Is it a music streaming service? An original content producer? A step away from its ad-based revenue model? Of course, it could be all of these things, but their failure to pull in a significant subscriber base (YouTube Premium and Music combined maintain about 20 million subscribers, compared to Netflix’s 183 million) has made doing so seem untenable.

While most streaming services are churning out more and more original content, YouTube has slowed its production down to a mere trickle. Although they have denied any intention to do so in the past, the platform seems to have been quietly divesting from that aspect of the premium operation for the past year or so.

We surveyed 1,122 people about their experiences in order to figure out what about YouTube Premium would attract subscribers without the promise of exclusive content. Here’s what we learned. 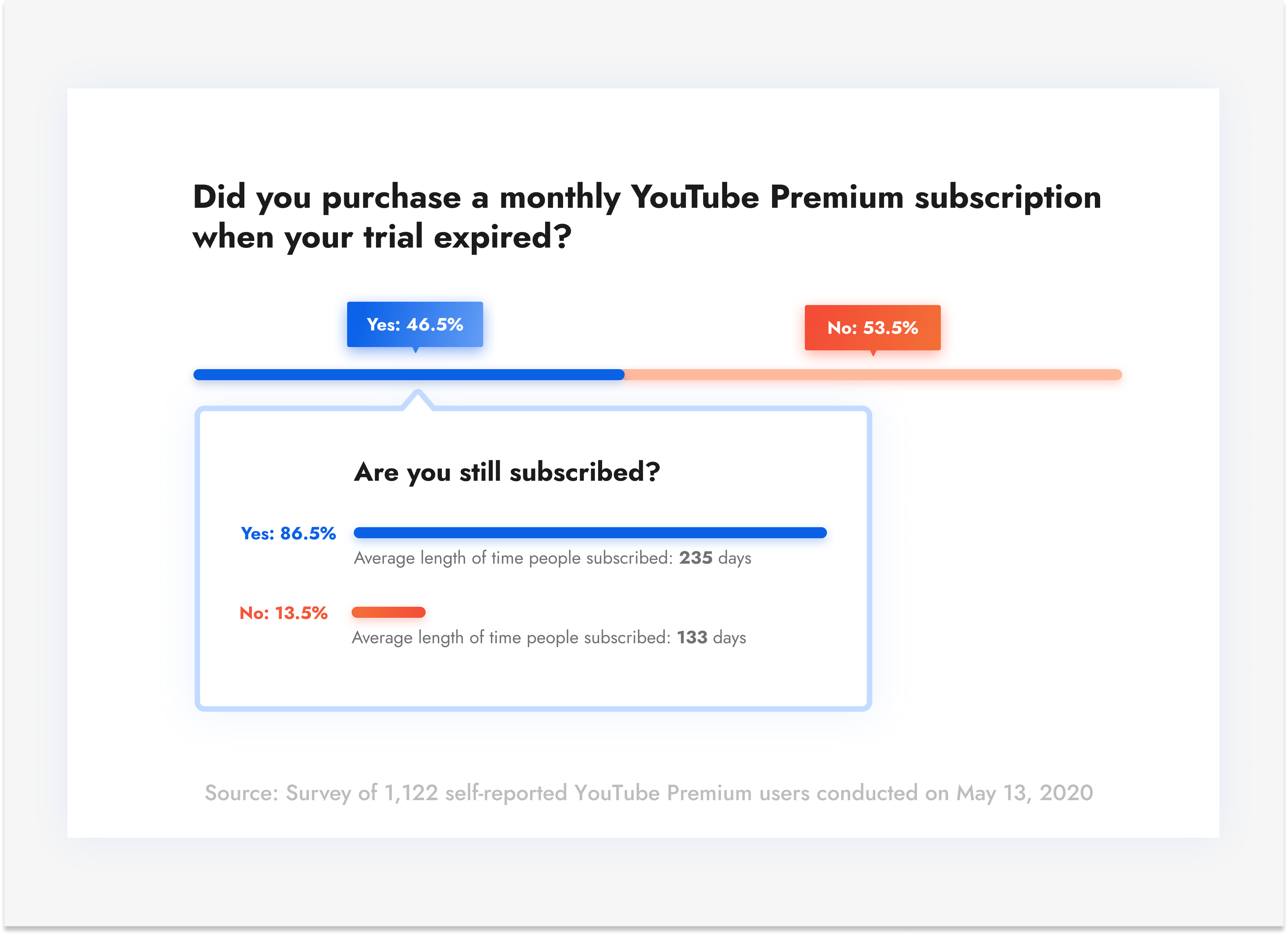 For those participants who signed up for a free trial, about 47 percent ended up purchasing the subscription. For those who were willing to pay $11.99 per month for the service, about 86 percent are still subscribed. On average, those who canceled their subscription did so after about four months of using the service. Those who are still paying for the service have been doing so for about eight months.

While their subscriber headcount is low, these statistics indicate that those who try it aren’t totally disappointed. When Flixed performed a similar survey about Apple TV+, only 28 percent of respondents were willing to pay for the subscription after the free trial period expired, despite the fact that it is half the price of YouTube Premium.

People primarily signed up to skip ads, and they primarily canceled because they thought YouTube Premium was too expensive 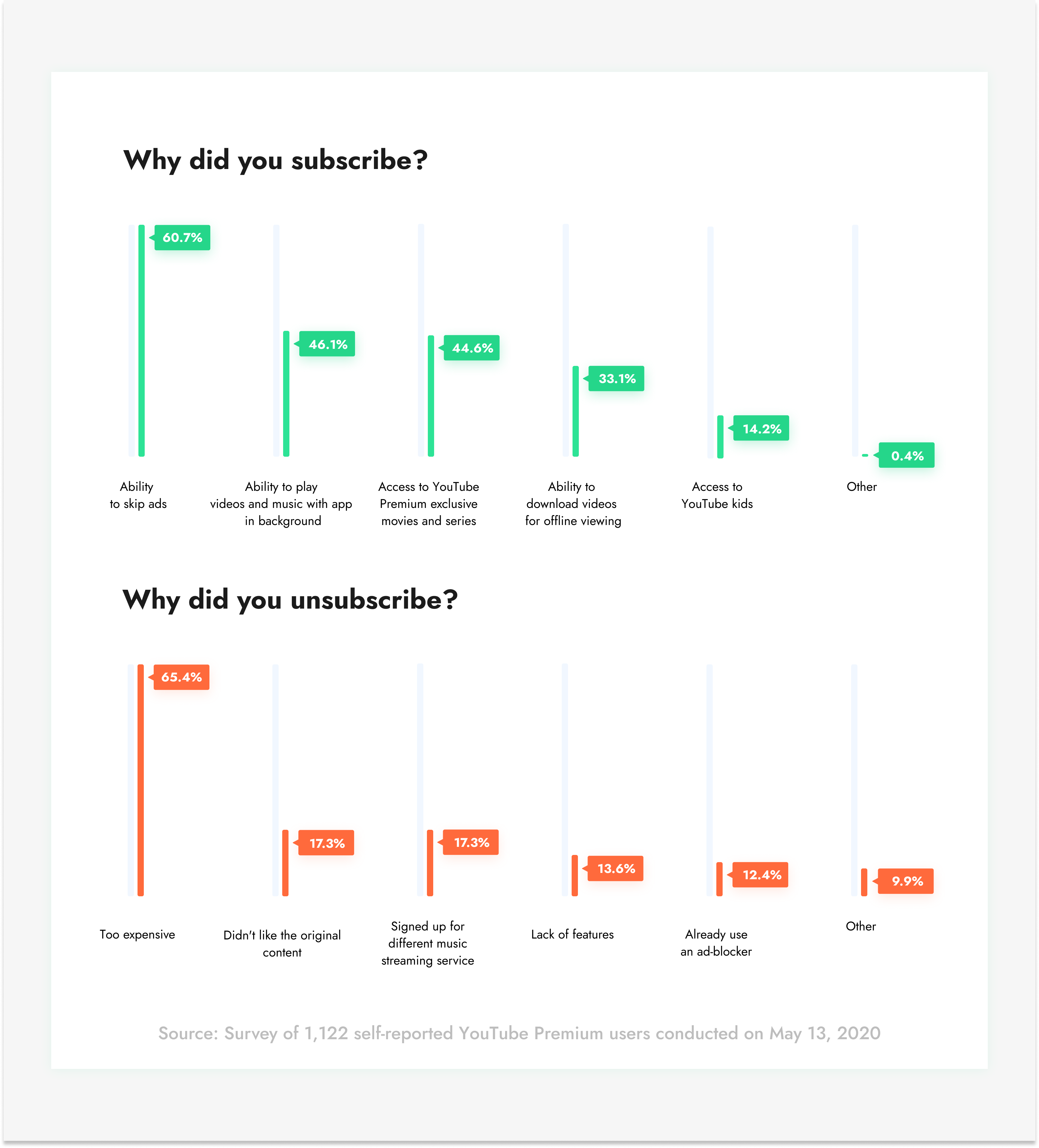 The prospect of making the free platform more convenient is ultimately YouTube Premium’s most attractive feature. The largest portion of respondents (about 61 percent) jumped at the opportunity to avoid ads. The mobile platform is annoying enough that 46 percent of respondents were intrigued by the fact that the premium version enables background listening and 33 percent were convinced by the opportunity to download content in order to access it in areas with poor connectivity.

Original content was the third most popular attraction to respondents, and only 17.3 percent unsubscribed because they didn’t enjoy the shows and films. An equal amount weren’t willing to make the switch from other music streaming services.

For the most part, the major drawback to most is the same for all streaming platforms: the cost. About 65 percent said they decided to unsubscribe because the $12-per-month fee was too steep a price. Considering that almost 14 percent were unimpressed by the array of features, it’s curious that YouTube decided to scale back on original content, which is one of its main draws. 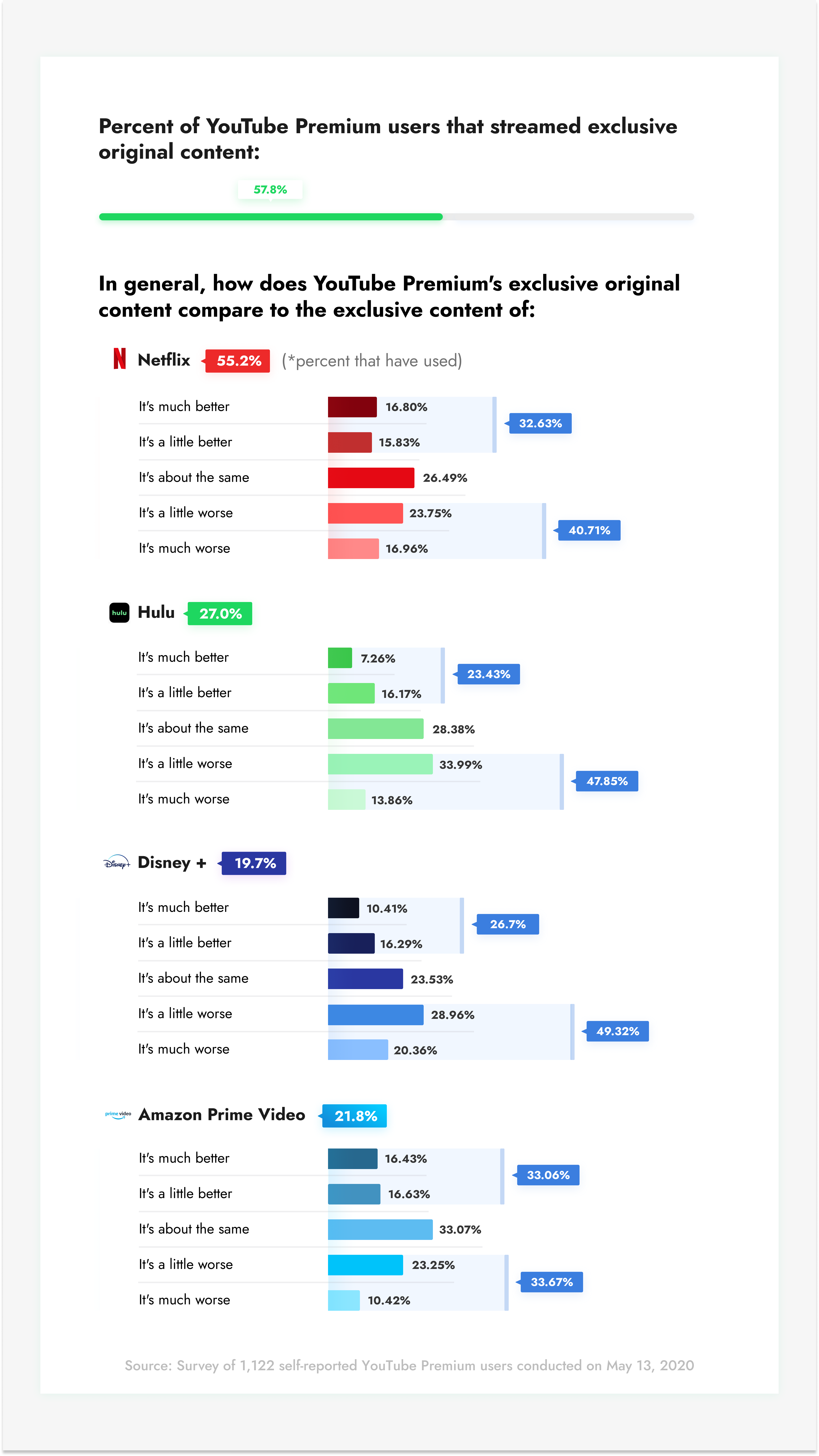 About 60 percent of premium users have checked out YouTube Originals, but overall, they were less delighted with the service’s offerings than with the exclusive content produced by competitors. About half of respondents preferred original content from Hulu and Disney+, and 41 percent thought YouTube’s content was worse than that offered by Netflix. Amazon Prime is YouTube’s closest competitor in terms of original content, with about 33 percent of respondents rating them as the same in terms of quality, but the fact that Prime members only pay $7.99 for a substantially larger catalog will likely keep them from jumping ship for YouTube any time soon.

For its part, not all of YouTube’s premium content options are lackluster. Its YouTube TV service is currently dominating the live TV market. When paired with a TV guide, it’s quickly become the go-to for cable TV cord-cutters, even as YouTube Premium falters.

While both SoundCloud and  YouTube have built reputations as quasi-social platforms for emerging talents, about 60 percent thought YouTube Premium was better for streaming music. Apple Music and Amazon Prime weren’t as harshly evaluated, but they still lagged far behind YouTube in terms of quality.

Spotify is undeniably the most popular app of its kind; about 130 million of the 350 million that subscribe to music streaming services use Spotify. Still, about 42 percent of respondents that had used Spotify had a better experience with YouTube Premium. While the music app offers a sparser library of playlists, the live performances and the ability to toggle between a song and its corresponding music video are features that make it totally unique. 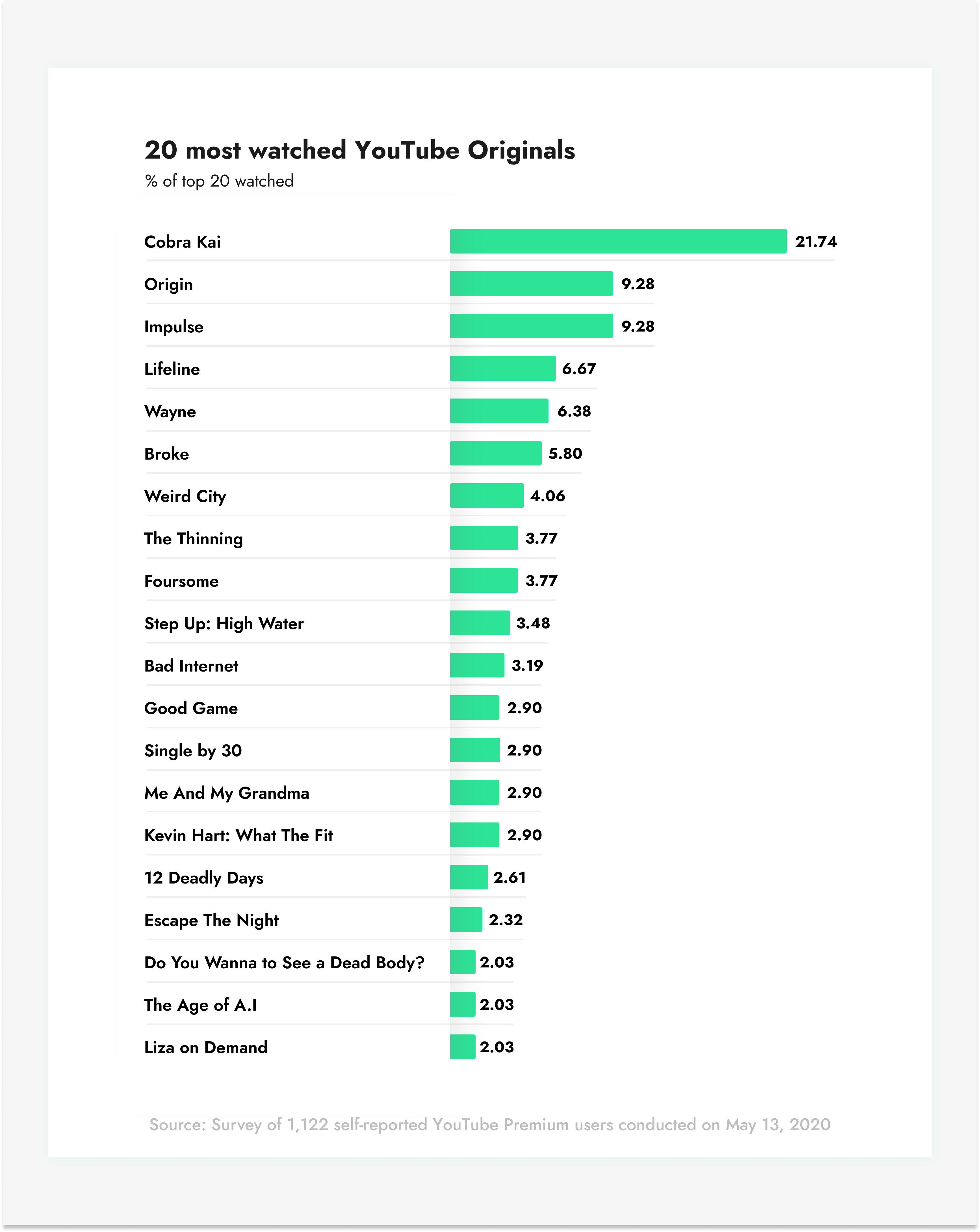 Nostalgia is obviously driving the popularity of the comedy-drama “Cobra Kai” (it’s a continuation of the Karate Kid saga), but it also seems to have the most depth amongst YouTube’s other offerings. Thirty years after the tournament in which Johnny Lawrence lost to Daniel LaRusso, their rivalry is reignited when Lawrence decides to reopen the Cobra Kai dojo. Lawrence is the type of pitiful antihero that typically has a massive arc in terms of character development; plus, the fact that the straightforward, good-versus-evil morals of the original film are followed by a show about redemption is undeniably tantalizing.

After the reboot, sci-fi shows dominate the top 20 most-watched Originals. There’s the ritzy horror series, “Origin,” in which a group of people wake up onboard an adrift spaceship after an alien knocks it off their course to a new planet; “Impulse,” in which a seizure-prone woman finds out she can teleport when she narrowly avoids being sexually assaulted; and “Lifeline,” which follows an insurance agent who time travels in order to save his clients from death. “Bad Internet” and “Weird City” seem to be satirical knockoffs of Netflix’s “Black Mirror” anthology. The Thinning sequel (in which teenagers who fail a standardized test are either executed or sent to labor camps) probably would’ve performed better if Logan Paul hadn’t posted a video of a victim of suicide inside Japan’s Aokigahara forest months before.

Interestingly enough, the educational and personality-driven content that YouTube plans to prioritize in the future doesn’t seem to be attracting nearly as many eyes. Kevin Hart’s celebrity-studded competition and the docuseries about artificial intelligence are the only unscripted shows to have made the list. A move away from original content makes sense since YouTube isn’t willing to spend nearly enough as its competitors, but the choice to primarily cut scripted content seems ill-advised when those shows and films are clearly the more popular of the bunch.

Our survey, conducted on May 13, 2020, comprised 1,122 respondents age 55 and under who self-reported as YouTube Premium users. The demographics for survey one were as follows: