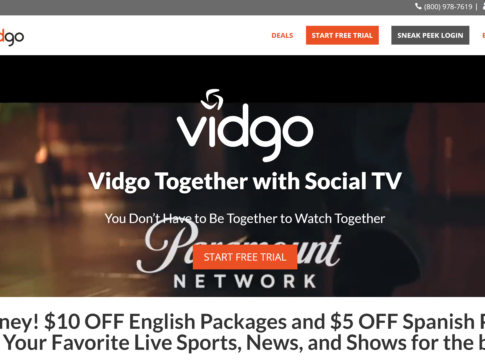 What is Vidgo? What are the main features, how much does it cost– and why in the world is yet another company entering the streaming service market? Keep reading for the answers to all these questions and more.

Before we start, we want to highlight a featured deal. The Disney Bundle is one of the best options for streaming with a package that offers a rich catalogue of content for all ages including movies, shows, and sports.

What is Vidgo? 30-second summary

Vidgo is a new sports-oriented live TV streaming service that made its official English-language debut late last year. The most unique thing about the service is a chat feature Hangs, which lets you socialize with other Vidgo users when you watch TV.

Perhaps because Vidgo is so new, many of the standard features that you’d expect to get with a streaming service– like cloud recording and local TV support, for example– are limited. Vidgo works with Chromecast and there are Vidgo apps for Android, iOS, Roku, Apple TV, Fire TV, but you can’t view Vidgo streams through a web browser. Occasional bugs and performance issues should be expected as well. New streaming services tend to experience these kinds of growing pains in their early days.

Vidgo has a lot in common with other live TV streaming services in terms of its channel offerings– and with time, it will probably bring its features up to par as well. So what is it that makes Vidgo unique relative to the competition?

How much does Vidgo cost?

The cheapest plan is $40, but various discounts and deals can reduce your monthly fees below that. The $40 price point makes Vidgo about $10/month cheaper than the average streaming service.

YouTube TV, Hulu with Live TV, fuboTV and AT&T TV Now are all pricier than Vidgo. However, the lifestyle-TV oriented streaming service Philo and streaming pioneer Sling TV are both cheaper.

It’s worth noting here that all the streaming services mentioned above have raised their subscription fees several times since their debuts. The general strategy among streaming services seems to be: offer low prices at first to reel in subscribers and to compensate for half-baked features and missing channels, then increase fees, improve features and add channels as time goes on. Only time will tell if Vidgo will follow in the footsteps of its competitors in this way.

Who are Vidgo’s major competitors?

Out of all the streaming services mentioned above, Vidgo seems to be aimed at competing with fuboTV and Sling TV.

Like Vidgo, fuboTV‘s main emphasis is on sports. In fact, half the channels you get with any fuboTV subscription are sports-related.

In terms of features, fuboTV has the clear advantage– especially when it comes to its cloud DVR. The fact that Vidgo doesn’t have a DVR yet is a huge weakness. However, the company has said that it is working on adding one. All fuboTV subscribers get 30 hours of recording time. The DVR is very convenient if you’re a sports fan because it lets you catch games that you don’t have time to see live.

fuboTV’s Achilles’ heel has always been the fact that ESPN is not part of its channel menu. Instead of ESPN, you get fubo Sports Network. On the other hand, NFL fans might take note that fuboTV carries NFL RedZone– an indispensable channel for those that hate commercials as much as they love to watch pro football. Vidgo doesn’t have that channel yet, but it does carry NFL Network.

The fact that Vidgo is both cheaper than fuboTV and offers ESPN might make it a worthy competitor.

Industry trailblazer Sling TV came out in early 2015. Its low prices have helped it survive after behemoth brands like Google and AT&T brought their competing services to the market.

Sling TV’s Orange base plan is still the cheapest way to get ESPN without cable. Even though Orange doesn’t have as many channels as Vidgo Core, it’s $10 cheaper.