TVPlayer.com is a great way to watch British television for free if you are a British citizen. You can get access to a large number of channels free of charge, with ad breaks, or you can pay a subscription fee to watch your favorite content without ads and to get additional channels.

But if you are a British expat or you’re traveling outside of the UK, you may be wondering how to watch TVPlayer.com outside of the UK. The service is exclusive to the United Kingdom, so you may think you’re out of luck.

But you’re not! In this guide, we’ll discuss the best options for unblocking TVPlayer.com and watching it outside of the UK. Let’s get started.

You Need a VPN to Watch TVPlayer.com Outside of the UK

If you want to watch TVPlayer.com outside of the UK, you’re going to need a subscription to a VPN service, such as ExpressVPN.

VPN stands for “Virtual Private Network”. TVPlayer.com is blocked outside of the UK because it can detect that you are not in the United Kingdom. As a result, all UK content is blocked.

A VPN takes your web traffic, encrypts it, and sends it to a private, encrypted third-party server in another country. If you use a UK-based VPN server, you can watch TVPlayer.com because it appears as if you’re connecting from a legitimate computer that has a UK-based IP address and geographic location.

If you don’t use a VPN, you’ll get the message you see in the above image: “Sorry, TVPlayer is currently only available in the United Kingdom.”

Can I Use Any VPN Service?

You can use any VPN service that has servers located in the United Kingdom. However, not all VPNs are built alike. Some VPNs are blocked by major content providers in the UK, such as the BBC iPlayer or ITV.

In addition, not all VPNs offer high speeds or secure connections, and some cheaper, cut-rate VPNs may only have a few servers in the UK.

That’s why you should use a top-quality VPN service like ExpressVPN. Cheap VPNs may not have the bandwidth you need for smooth video playback, and “free” VPNs usually skim your information and share it with third parties.

Can I Use a SmartDNS?

SmartDNS services have become popular for getting around “geoblocks” and watching online content without using a VPN. However, a SmartDNS is not a good substitute for a VPN for several reasons.

First, SmartDNS services don’t encrypt your web traffic. It’s easy for a service like TVPlayer to look at your original IP address and see that you’re not connecting from the UK. In addition, your ISP will be able to see your internet activity, which means they can share it with third-party companies or even throttle your speeds.

Additionally, most SmartDNS services only have a few servers available in the UK. If they all get blocked, you won’t be able to watch TVPlayer.com. For these reasons and a few others, we recommend using a VPN.

How To Set Up ExpressVPN To Watch TVPlayer.com

Not sure how to use a VPN to watch geoblocked content? Let’s go over the setup process for ExpressVPN. You’ll be able to stream TVPlayer.com in just a few minutes with this comprehensive setup guide.

If you’re ready to get started with a VPN, ExpressVPN is a great choice. Head over to their website and get signed up.

You can sign up for a monthly subscription for $12.95 per month, but you can save quite a bit of money if you choose a 12-month subscription (3 months free) for $6.67 per month. ExpressVPN has a 30-day money-back guarantee, so you can always cancel if you don’t like the service.

Choose the subscription you want, and enter your payment details. You can even pay with Bitcoin if you’d like to hide your identity and avoid sharing your personal information, such as your credit card number.

After selecting a subscription option, ExpressVPN has you create a user account.

Here, you can view the basics about your subscription. To get started, just click the green “download” button in the upper-left corner. You can download ExpressVPN for Mac, PC, and Linux. Install ExpressVPN, and run the program.

Step 3: Register and connect to ExpressVPN

You’ll be asked to sign in once you’ve downloaded and installed the ExpressVPN program. The screen should look like the above screenshot. Press “Sign In” to get started.

When you sign in for the first time, you will be asked for an activation code, rather than your login and password. You can find this activation code on the ExpressVPN account dashboard, to the right of the “Download” button.

After you’ve signed in, you’ll see the following screen.

To connect to TVPlayer.com from outside of the UK, we’ll need to connect to a UK-based VPN server.

Press the “Choose Location” button on the lower-right of the ExpressVPN client to change your location. You will see the following screen:

You can browse through each of the available servers, or you can use the search bar on the upper part of the client to simply search for a server, which is often easier. Scroll down and select “United Kingdom”.

You’ll see this screen. Select the server that you would like to connect to, and then close this window by pressing the “Choose Location” button on the main screen of the VPN client. Then, press the large “power” button in the center of the window to connect to this server. 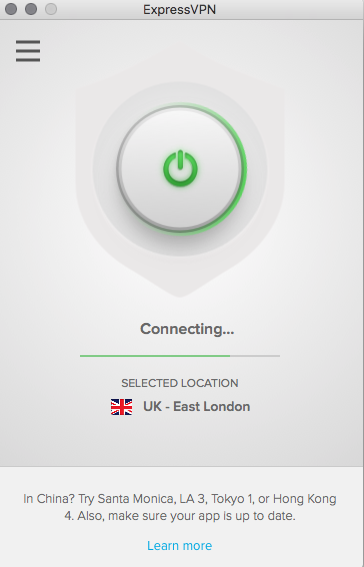 You’ll see a “Connecting” screen as the VPN establishes a secure connection with your chosen server. Once the connection has been established, you’ll see the following screen:

You have now successfully connected to the VPN server, and you’re ready to watch TVPlayer.com! Let’s move on to the next step.

If you’re thinking about installing the TVPlayer.com app on your iOS or Android device, you can do that—and watch TVPlayer—as long as you also install and run the mobile version of the ExpressVPN client.

You can download ExpressVPN from the app store if you use an iPhone, or from the Google Play Store if you prefer Android devices.

Again, setup is quite simple. Download the app, log in using your activation code, and select a UK-based server from the list provided. Then, activate the VPN connection, and open up the TVPlayer.com app. You’ll be able to watch all of your favorite shows while you’re on the go – even if you’re outside of the UK!

Are There Any Alternatives To ExpressVPN?

Don’t want to use ExpressVPN to watch TVPlayer.com outside of the UK? That’s fine—there are plenty of other options you can use to unblock TVPlayer.com. Here are a couple of our other top choices.

StrongVPN is a good alternative to ExpressVPN, and it’s especially popular for people who are using a VPN in China. It has a lot of servers and great features, and highly-secure encryption.

StrongVPN obfuscates your internet traffic, which makes it harder for content companies like TVPlayer.com to know that you’re streaming from outside of the UK. This reduces the risk of your VPN server’s IP address being blocked or blacklisted.

This VPN service uses high-quality security protocols. Notably, it does not support the outdated and insecure PPTP protocol, so it’s great for security-conscious individuals.

It also has a good number of servers. While it does not have quite as many as ExpressVPN, StrongVPN still has a total of 650 servers, located in 46 cities and 26 countries around the world. As far as UK servers go, StrongVPN has you covered, with dozens of locations in UK cities like Canterbury, Livingston, London, and more.

It’s also a bit cheaper than ExpressVPN. If you choose a month-to-month subscription, you’ll have to pay $9.99/month. However, if you choose to purchase a subscription for a full year, the cost is $69.99, which works out to be $5.83 per month.

Overall, StrongVPN is a good alternative to ExpressVPN. With a simple setup, dozens of UK-based servers, and a dedication to security, it’s worth a look if you don’t think ExpressVPN is right for you.

On a strict budget? NordVPN is the VPN for you. It’s one of the cheapest VPNs on the market, and you can enjoy some serious savings if you’re willing to commit to a long-term service contract.

It costs $11.95/month if you choose a monthly subscription. However, if you choose to buy a two-year plan, that cost drops to just $3.29 per month—and if you subscribe for 3 years, you’ll pay the equivalent of $2.75 per month. This makes it one of the cheapest VPN options out there, bar none.

NordVPN doesn’t skimp on the features, either. They boast a total of 4,300+ servers in 62 countries, with a mind-boggling 538 servers in the UK alone, spread throughout multiple cities. You’ll never have trouble finding a high-speed server for watching TVPlayer.com if you use NordVPN.

It also allows you to connect up to 6 devices at once, which is more than StrongVPN and ExpressVPN. If you are going to use a lot of devices or share your subscription, NordVPN may be your best choice.

What Can I Watch On TVPlayer.com?

One of the main benefits of using a VPN to watch TVPlayer.com is that you can watch quite a bit of British and US-based channels for free.

TVPlayer.com has a huge number of channels, and they’re not just UK-based channels, either. There are quite a few American channels present—and you can watch them all using TVPlayer.com

These channels can be watched for free using TVPlayer, without even signing up or creating an account.

There are more than two dozen other channels that you can watch for free on TVPlayer, including QVC, FashionTV, and quite a few more. Head to their website for more details.

If you have a TVPlayer Plus Lite month-to-month subscription, you can get quite a few more channels including:

If you have the TVPlayer Plus Max subscription, you can watch all of the above channels. In addition, you will also get:

And several other channels.

There are several other TVPlayer.com channels that are available as optional add-ons, and are not included in any of the above subscriptions.

BoxNation, a 24/7 channel dedicated to coverage of boxing, can be added to TVPlayer.com for an additional fee.

Globo is a Brazilian TV network, which can be added to your TVPlayer.com subscription for a fee.

Eric Liston is a content writer based in Columbus, Ohio. Since 2015, he’s been writing about technology, cord-cutting, and helping everyday people save money. He also has expertise writing about medicine, dentistry, insurance, and a variety of other industries. No matter what he’s writing, his focus is always on simplifying complex concepts and making them approachable for everyone. When he’s not slamming away on his keyboard at his home office, you’ll find Eric reading sci-fi novels, improving his disc golf game (he just hit his first 400-foot drive) and playing video games on his gaming PC.

Eric Liston is a content writer based in Columbus, Ohio. Since 2015, he’s been writing about technology, cord-cutting, and helping everyday people save money. He also has expertise writing about medicine, dentistry, insurance, and a variety of other industries. No matter what he’s writing, his focus is always on simplifying complex concepts and making them approachable for everyone. When he’s not slamming away on his keyboard at his home office, you’ll find Eric reading sci-fi novels, improving his disc golf game (he just hit his first 400-foot drive) and playing video games on his gaming PC.