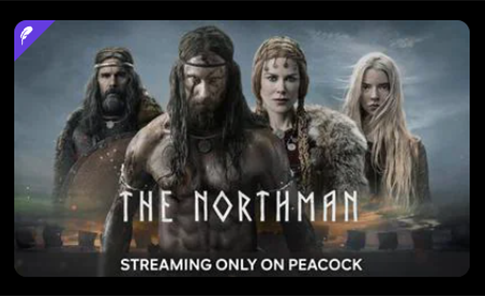 How to Watch The Northman

The critically acclaimed historical epic film The Northman just hit theaters in April, but you might already be wondering if there’s any place you can stream it. And we’re happy to say that there is. The Northman is currently streaming exclusively on Peacock. Read on for all you need to know about how to watch The Northman from the comfort of your own home.

What is The Northman?

With a runtime of 2 hours and 17 minutes, The Northman is a 2022 historical epic film – and brutal revenge story – about a 10th-century Viking prince on a mission to avenge the death of his father. It stars Alexander Skarsgård and Nicole Kidman, with other big names like Ethan Hawke, Willem Dafoe, and Björk in supporting roles.

Made on an estimated budget between $70 – 90 million, the film made just below that at the box office, but has been performing well in home media sales.

The film has received a positive response from critics, with it scoring 5 out 5 from The Guardian, Digital Spy, and GamesRadar. It earned another perfect 5 out of 5 from The Independent, in a review titled “A Viking epic of thick, blood-red brutality.”

RogerEbert.com gave the movie 3 out 4 stars, praising the performances, direction and cinematography. And it currently holds an 89% approval rating on Rotten Tomatoes with an average rating of 7.7/10.

Where can you stream The Northman?

While you can buy or rent it as a premium-priced digital download for 20 to 25 bucks, the only streaming service with The Northman is Peacock.

The Northman premiered on Peacock on June 3. It follows in the footsteps of other theatrical releases this year that moved from the big screen to exclusivity on Peacock, such as Michael Bay’s Ambulance and critically acclaimed crime thriller The Outfit.

Which Peacock plan do you need to watch The Northman?

Peacock has 3 plans to choose from, including a free plan.

The basic Peacock plan is completely free – meaning it doesn’t require a credit card when signing up. It gives you immediate access to a hefty chunk of the extensive content library that NBCUnivseral has built over the past century.

With 1000s of hours of free content, your choices range from movies and TV shows to daily news and sports commentary to kids’ programming. There are also exclusive Peacock channels, content hubs like Bravo, and a Spanish-language series by Telemundo.

However, new and premium releases like The Northman require one of the 2 paid plans. Fortunately, they’re both under $10/month.

The Peacock Premium plan includes everything in the basic plan, then gives you total access to everything in the library. The ad-supported plan costs $4.99/month, but you can save 17% by paying $49.99 for the year upfront.

If there are shows you plan to follow over their seasons, paying annually makes sense as it’s basically like getting 2 months for free. Premium members can also stream NBC and Telemundo shows the day after they air. And starting in September, next-day streaming will apply to all Bravo shows as well.

Second, Premium Plus lets you download popular shows and movies to your mobile device so you can watch them offline. That way, you don’t need to worry about data usage or a bad internet connection.

Therefore, if you want to watch The Northman at home, you can buy or rent a digital copy for $20-25. Or for half – or even a quarter – of that price, you can stream it on Peacock and also get 60,000+ hours of movies and TV shows for an entire month.

Just like some DVD and Blu-ray releases include bonus features or extras, Peacock has 4 shorts for movie fans. And you can even watch them with the free plan.

After the Movie: The Northman is obviously something to watch after seeing the movie. It’s an 18-minute interview with director Robert Eggers and Alexander Skarsgård, the star of the film.

Two short clips under 2 minutes are 60 Second Film School with Robert Eggers and My First Gig: Robert Eggers. And there is an episode of the webseries Reel Destinations that visits Northern Ireland’s filming locations of The Northman.

Shows and movies similar to The Northman on Peacock

Universal Pictures is the oldest film studio in America and NBC is the country’s oldest TV network. That gives NBCUniversal’s Peacock streaming service a wealth of entertaining content to draw from – which means there’s almost always going to be something similar in the library, regardless of what you’re watching. And that applies to The Northman.

If you want to stick with the Vikings theme, you can’t do much better than the award-winning TV series Vikings. All 6 seasons are available to stream on Peacock.

If you’re in the mood for a historical epic, Zack Snyder’s action-packed 2006 blockbuster 300 is also in the Peacock library. And if it’s revenge you’re after, the 2017 Russian film Furious follows a 13th-century soldier as he takes down the Mongol army that pillaged his village.

The 2015 British-Serbian co-production Sword of Vengeance checks both boxes – Vikings and a revenge story – although it doesn’t share the critical acclaim of The Northman. But you can watch it with Peacock’s free plan, so you can judge for yourself and all it will cost you is 86 minutes.

Which devices can you stream The Northman on?

You most likely want to watch The Northman on your home theater system, but if you need to watch it on the go, Peacock supports a good range of devices. Here’s a snapshot of the devices you can watch The Northman, but for a more detailed list, check out our Peacock Device Support in 2022 post on Flixed.