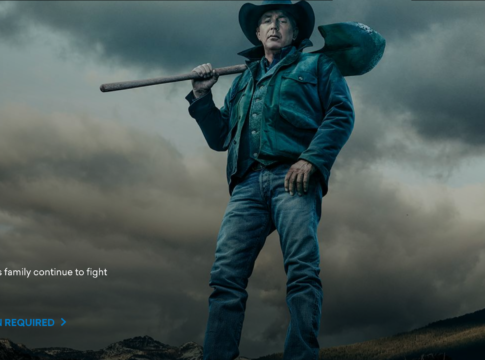 You can watch Paramount Network live without cable with one of these streaming services: Philo, Sling TV, fuboTV, or AT&T TV Now. In this article, we’ll help you decide which option is best for you so that you can catch the latest shows like Yellowstone. Let’s get started!

Philo is a newer internet TV service, and it focuses exclusively on entertainment and lifestyle content, without any expensive sports networks. This allows it to offer a pared-down TV package for an extremely low price, and with great features. Here’s what you should know about Philo.

Philo offers only a single package of channels, which will cost you $20/month, and comes with 60+ entertainment and lifestyle-focused channels, including Paramount Network. Learn more about this package here.

You’ll get Paramount Network with Philo, as well as plenty of other top-notch entertainment and lifestyle networks like Lifetime, Food Network, DIY Network, The Science Channel, and MTV/MTV2, as well as The Cooking Channel, MTV Live, Logo, and a few other channels.

As mentioned, Philo does not offer any local broadcast stations such as NBC, ABC, or Fox, and also does not contain any sports channels. Learn more here.

With Philo, you can stream on up to 3 devices at once, which is more than AT&T TV Now without upgrading, and equal to the streams offered by Sling Blue, but at a much lower cost. Learn more here.

You also get a DVR for free with Philo. While you can only store recordings for 30 days, you can save unlimited shows with the Philo DVR, unlike with Sling TV and AT&T TV Now. If you need to save a lot of content from the Paramount Network, Philo may be the right choice for you. Learn more here.

Philo has plenty of on-demand content, sourced from the various channels included in your package, including Paramount Network. You can expect to find recently-aired episodes, a few past seasons, and a selection of movies. Learn more here.

Sling TV is the oldest internet TV service, and was founded in early 2015. Since then, its unique “a la carte” approach to cable channels has gained it nearly 2.2 million subscribers. Here’s what you need to know about Sling TV.

Sling TV does things somewhat differently than other “skinny bundles”. Rather than a tiered subscription, it offers two primary packages, Sling Orange and Sling Blue ($30/month) with distinct channels, which can be customized with extra add-on cable packages, or combined with Sling Orange + Blue for $45/month. Learn more here.

Sling Orange includes about 30 channels, depending on your geographic location. Some highlights of this package include ESPN, ESPN2, and the Disney Channel.

Sling Blue also costs $30/month and comes with mostly the same channels as Sling Orange, but brings the total number of channels to about 45. You also have the option of combining Sling Blue + Orange for $45/month for about 53 total channels, depending on your area.

However, Paramount Network is not part of any of these packages. You have to pay a $5/month fee to get Paramount Network, which is included in the “Comedy Extra” package for both Sling Blue and Sling Orange.

As an example, you’ll get Paramount Network with both Sling Blue and Sling Orange, if you get the Comedy Extra package.

One good aspect of Sling TV’s features is that you can stream on just about every device in your home. Sling TV supports on-the-go viewing on iOS and Android, as well as modern web browsers. On the big screen, you’ll be able to watch with Chromecast, Apple TV, Roku, Amazon Fire TV, Android TV, Xbox One, and some late-model Samsung and LG Smart TVs using the Sling app. Learn more here.

You only get 1 stream at a time with Sling Orange, due to licensing agreements with some of the channels provided in the bundle. With Sling Blue, though, you can stream all Sling Blue channels on up to 3 devices at once.

Another caveat of this is that even if you get Sling Orange + Blue, you can still only stream Sling Orange-exclusive channels, like ESPN, on a single device. If a channel is shared by both Sling Orange and Blue, though, you can stream it on 4 devices simultaneously (3 from Blue, 1 from Orange). Learn more here.

The Sling TV on-demand library consists of recently-aired episodes, past shows and top movies from the various channels included in your subscription, like Paramount Network. Learn more here.

Get the first month for only $20

While fuboTV was founded primarily as a sports-focused streaming service in 2015, it has become a much more well-rounded cable alternative in recent years, and it’s a good way to watch Paramount Network without cable.

You only need the cheapest, $54.99/month “fubo Standard” package from fuboTV to get Paramount Network without cable. The more expensive packages will offer a few more channels and extra features. Learn more here.

fuboTV has a total of between 80-100+ channels depending on which package you choose. This includes Paramount Network as well as other top entertainment channels like FX, AMC, TBS and TNT, as well as plenty of sports, news and lifestyle channels. Get a full breakdown here.

fuboTV has device support for most major streaming devices, except gaming consoles. You can stream on iOS and Android, your web browser, Amazon Fire TV, Chromecast, Roku and Apple TV. Learn more here.

By default, you can only stream on 2 devices at once with fuboTV, but you can add a $5.99/month add-on package to boost your limit to 3 devices, if you want. You can also upgrade to the Family or Ultra plan to stream on 3 devices. Learn more here.

fuboTV has a 30-hour DVR by default, but you can get 500 hours of storage if you pay a $9.99/month fee to upgrade your cloud DVR, or subscribe to a Family or Ultra plan. Learn more here.

With fuboTV, you’ll get a good lineup of on-demand shows from channels like FX, AMC, Paramount Network and more, including most of the recently-aired top shows, a few past seasons, and plenty of movies. Get more details here.

AT&T TV Now is the new name of DirecTV Now. This used to be one of the most popular internet TV services, and it’s owned by AT&T. While it’s a decent way to watch Paramount Network without cable, its high price and relatively poor features mean you may want to look elsewhere.

If you want to get Paramount Network, you’ll need to shell out at least $80/month for the Max package, making this the most expensive option to watch Paramount Network without cable, by far. You can see what’s in each above package here.

With AT&T TV Now, you’ll get Paramount Network, and you can also get channels like MTV and MTV2, as well as TLC, TNT, and TruTV, depending on the package you choose. Get a full channel list here.

AT&T TV Now does have good device support. You can watch Paramount Network on iOS, Android, web browsers, Roku, Apple TV, Chromecast, and Amazon Fire TV, so you have plenty of options.

AT&T TV Now allows you to stream on up to 3 devices at once. Learn more here.

AT&T TV Now gives you 500 hours of DVR storage space, which is quite good. However, your recordings will be deleted automatically after 90 days. Learn more here.

AT&T TV Now has a large selection of on-demand content, and claims to have more than 40,000 titles available for streaming. This varies over time, though, and also depends on how many channels you get in your AT&T TV Now package. You can learn more here.

How to Watch Paramount Network on Amazon Fire TV

You can watch Paramount Network on Amazon Fire TV with one of these streaming services: Philo, fuboTV, Sling TV, or AT&T TV Now. Just download the app for your preferred streaming service from the Amazon App Store, log in, and enjoy.

You can also download and install the Paramount Network app to watch more live and on-demand TV. You can just sign in with your Philo or AT&T TV Now subscription. Sling TV and fuboTV do not support this feature.

How to Watch Paramount Network on Roku

Alternatively, you can use AT&T TV Now or Philo to sign into the Paramount Network channel from the Roku Store for even more on-demand and live content. You can’t do this with Sling TV or fuboTV, though.

How to Watch Paramount Network on Apple TV

You can watch Paramount Network on Apple TV with one of these streaming services: Philo, fuboTV, Sling TV, or AT&T TV Now. Just open up the App Store, download the app for the service you’re using, and install it. Then, sign in and enjoy.

Philo and AT&T TV Now also let you sign into the Paramount Network app for Apple TV, but you can’t do this with Sling TV or fuboTV.

One nice thing about most internet TV services is that if you subscribe to a particular channel, you will also get access to that cable channel’s mobile application and website for live streaming and on-demand viewing of past episodes.

This is true of the Paramount Network. If you subscribe to Philo or AT&T TV Now you can log into Paramount.com or download the Paramount app for your phone, or for Roku, Apple TV, and Amazon Fire TV.

Then, you just pick your internet TV provider and enter your login credentials, and you’ll be able to watch both live streams and on-demand content. Interestingly, Sling TV and fuboTV do not appear on the list of supported internet TV providers, so that’s something to keep in mind when deciding which “skinny bundle” you want to subscribe to.

The primary advantage of watching Paramount Network directly on its website or on its mobile app is that it does not count towards your simultaneous streams. For example, you could watch Paramount Network with your AT&T TV Now login, and your family could still stream AT&T TV Now on 2 other devices.