You can watch HBO live without cable with one of the following four options: Hulu with HBO add on, AT&T TV Now, or HBO Now. In this article, we’ll help you decide which streaming option is best for you. Let’s get started!

Hulu is another excellent way to catch Game of Thrones episodes. One of Hulu’s biggest attractions is its massive library of on-demand content for only $5.99/mo.

The HBO channel costs $15 extra with Hulu. That’ll bring your monthly entertainment costs to $20.99/month if you use this streaming service to watch Game of Thrones.

There are Hulu apps for just about every type of TV device except PlayStation consoles.

Click here to learn more about devices that work with Hulu.

AT&T TV Now out of the cord cutter’s handbook with its service, offering up an all-inclusive package of channels, some of which include HBO.

You’ll be able to get HBO as part of an AT&T TV Now streaming package if you opt for one of the two introductory options. Both come with HBO included for the price.

AT&T TV Now has a very large menu of channels. Just about every cable TV channel you can think of is available.

AT&T TV Now has apps for the following streaming devices:

Click here to learn more about devices that work with AT&T TV Now.

AT&T TV Now didn’t have a DVR at all until the AT&T TV Now 2.0 upgrade gave DirecTV Now subscribers the ability to record up to 20 hours of TV.

AT&T TV Now has over 40,000 on-demand shows and movies. With the exception of Hulu with Live TV, most other live TV streaming services only have a small amount of on-demand content.

Although AT&T WatchTV operates similarly to Philo, it differs primarily through having an add-ons feature. You can add HBO to part of your AT&T WatchTV package if you want a low-cost entry to live TV.

You can get AT&T WatchTV For $15 per month. To get HBO, you’ll need to tack on the HBO add-on for $17.99 per month. (Note that while this is an option, but if you want AT&T Watch TV and HBO, you’ll be better off getting HBO Now separately since it’s cheaper that way.)

AT&T WatchTV comes with an array of lifestyle and entertainment networks, but no sports or local broadcast networks. So you’ll get options like History Channel, Discovery Channel, A&E and AMC, among others.

You can use AT&T WatchTV to stream on every major TV-connected devices, and every major phone and computer operating system.

There is also no DVR available through AT&T WatchTV.

How to Watch Game of Thrones on Amazon Fire TV

You can watch Game of Thrones on Roku with one of these streaming services: Hulu with Live TV, AT&T TV Now and HBO Now all carry HBO. Just click the app you want and go through the setup process to get started. HBO Now– a $15/month standalone app that gives you access to HBO content– is another option.

How to Watch Game of Thrones on Roku

You can watch Game of Thrones on Roku with one of these streaming services: Hulu with Live TV, AT&T TV Now and HBO Now. Just pick the one you want to try and choose a subscription that includes HBO. If you don’t care about live TV, just get the HBO Now app. It costs $15/month and gives you complete access to HBO originals.

How to Watch Game of Thrones on Apple TV

You can watch Game of Thrones on Roku with one of these streaming services: Hulu with Live TV, AT&T TV Now and HBO Now. Just search the app store and download the streaming service of your choice. If you’re not in the market for a streaming service, just get the HBO Now app. It costs $15/month after your free trial is up. 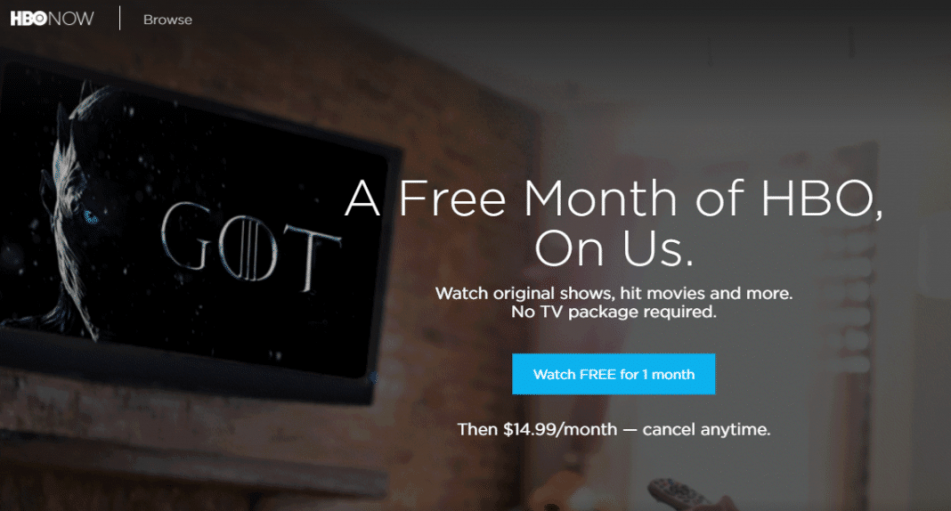 If you don’t care about any other cable package or streaming service, you can tack on HBO’s stand-alone streaming option, HBO Now, and watch through the HBO Now app. HBO lists all of the following for where you can add in an HBO Now subscription:

How to Maximize Free Options

If you’re trying to watch Game of Thrones Season 7 without cable, but also without having to pay anything, your best option is to use the free trial periods for Sling TV or HBO Now. However, keep in mind that as of this time of writing, Game of Thrones Season 7 has only just begun airing. The current season will not end until August 27th, at which point all ten episodes will be available at once as a packaged deal.

Your best cost-cutting method will be to wait until after August 27th and then start up one of the free trials. For the Sling TV option, you’ll have seven days to completely binge watch all ten episodes. For HBO Now, you’ll have a bit more time given HBO offers up a month of free streaming with that service before you need to pay up.

Sticking With HBO After Free Trials

If you’re a hardcore Game of Thrones fan, you may be coming to HBO’s streaming options just for the fantasy show, and that’s it. However, HBO is far more than Peter Dinklage. Part of HBO’s winning strategy has been to create and market a large amount of in-house and award-winning content. In particular, HBO’s focus has been on very edgy dramas with quite a bit of sex appeal, something that other services, such as Netflix, Showtime, Amazon, and Hulu, are all trying to mimic with varying degrees of success.

A futuristic drama in which humans pay to spend time in a “Wild West” theme amusement park peopled by life-like, increasingly sentient robots.

In this comedy, a group of developers attempts to strike it rich by forming a start-up in the California Bay Area.

A political drama following a newly elected US Vice President embattled by politics and dysfunctional relationships.

Where to Find Earlier Game of Thrones Seasons

Finding older seasons of Game of Thrones is quite a bit easier than finding current season options. While HBO pretty much restricts its newest season to HBO Now or other subscription-based services, you can purchase older episodes a la carte through different locations. Several digital media stores are actually selling older episodes at a discount, so now may be the best time to purchase them if you’re in the market.

This includes, but is not limited to, all of the following:

VUDU sells Game of Thrones episodes and seasons. You can buy them per episode, or purchase an entire season. As of this time of writing, VUDU is selling all Game of Thrones seasons for a discounted price. Where some of these seasons would normally cost $29.90 for SD and $39.90 for HD, they’re now available for $19.99, regardless of quality. Yes, that means you can currently get the HD versions of seasons 1-6 of Game of Thrones for $19.99 per season. Quite a deal!

You can currently purchase any full season of Game of Thrones on Google Play for $22.99 each. This is obviously not nearly as good a deal as what VUDU is running, but you’ll be able to stream the episodes through your Google account, a much more useful option than the less-popular VUDU.

Amazon remains a great place to purchase TV show episodes and seasons. For Game of Thrones, it’s not going to be your best choice, at least for now. Amazon is currently selling previous GoT seasons for $26.99 a season, much higher than what’s offered through Google Play and VUDU, although less than what VUDU offers the seasons without a discount.

Apple users can find their Game of Thrones seasons on iTunes. The pricing isn’t the same across each season here, however. You can get the first season of GoT for $19.99 (both HD and SD), while Season 6 will cost you $34.99 for HD and $24.99 for SD. Apple also doesn’t appear to be running any deals for their episodes GoT seasons, which isn’t too surprising, but still worth mentioning if you’re trying to save a bit of money on your purchase.

You can purchase older Game of Thrones episodes and seasons on Fandango Now. Their pricing scheme is very similar to what currently exists on Apple’s iTunes store. The earliest seasons (1 and 2), sell for $19.99 per season, while Season 6 will set you back $29.99 for the HD and $28.99 for the SD. The price is slightly better than iTunes for the newer seasons, but still not better than what both VUDU and Google Play are both (temporarily) offering.

Have you found another creative way to watch Game of Thrones Season 7 without cable? Let us know, and we’ll add it to our list!

Sometimes, it just might not be possible to lose your cable plan completely. If that’s the case, here are two ways to keep your cable but reduce the cost and still get your HBO options.

HBO Go is essentially HBO’s app for those who currently have a cable package and want to watch HBO on the go. I know, you just read “cable package” and started cringing. Hang with me here.

In 2014, Fast Company detailed out a way to get HBO Go without the hefty cable package, although you might still need to order a very small package, e.g., the smallest possible cable package that your ISP provides. We’re putting this one here because it’s still a reasonable option to help lower or limit your cable package presence while being able to enjoy HBO.

If you’re like me, you may live in an area where your only decent internet option is a combined cable and internet package. Many ISPs only bundle their good internet plans with cable packages. It’s unfortunate and predatory, especially in regions (like mine) where there’s no competition, but it is what it is.

Instead of ordering the most expensive or even a mid-tier cable package with your internet, you can try to order off of the “secret menu” that many ISP/cable providers, such as Comcast, offer. There are two ways to do that.

Method 1: Know the “password” of sorts, and ask for that specific plan.

What that is for your ISP will vary, but Fast Company lists the following for a some of the larger US ISP/cable providers:

Method 2: Threaten to switch to another company.

This one may take a few hours and some diligence on your part, but I can attest to its effectiveness as I personally used it a few years ago and shaved off $50/month from my cable package.*

If you live in an area where there’s more than one cable/internet provider, your provider will be willing to negotiate a better deal — but you’ll have to be willing to put in the time to get transferred high enough up the phone chain to get that offer. With Comcast, what I did was call up customer service, explain to them that I was unhappy with my bill and that I wanted a lower bill or I’d leave for another company.

I spent over 2 hours on the phone, going back and forth, frustrated manager after frustrated manager, getting pushed further up the chain of command until I finally got handed off to someone who was actually willing to give me a better deal in exchange for my staying with the company. It resulted in a smaller cable package with the same internet speeds, exactly what I wanted.

*(I should note that I have since moved locations, and Comcast silently used that as an opportunity to push me back into a more expensive cable/internet plan. I’m unfortunately now in a location where they have no competition, so I have no more bargaining power. This whole method hinges on your personal bargaining power and threats to go to another provider.)