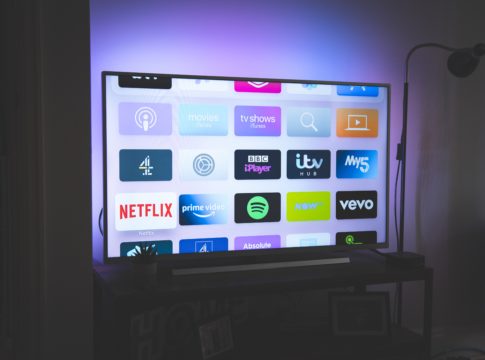 One of the hardships of cable TV is sharing screentime with your family. Dad wants to watch MLB, while Mom fancies the latest movies on HBO. On top of that, the kids want to catch Saturday morning cartoons.

This is just one of the common problems families have with cable TV.

These days though, internet TV services allow the entire family to enjoy their favorite programs from the comfort of separate devices. With the help of a streaming platform’s simultaneous stream feature, everyone can watch what they want whenever they want. Now, fighting for the remote is a thing of the past.

In this article, we take a look at the simultaneous streaming feature of Vidgo.

Complimentary TV for one week

Like other streaming services, Vidgo offers new users a free trial period. For one week, you can get a sample of what Vidgo has to offer. During your first week of subscribing, you can watch channels like the Food Network, ESPN, Lifetime, BET, and many more, all without spending a dollar. Take the week to decide if Vidgo is the service for you.

If your preferred channel isn’t available, your device can’t access Vidgo, or you aren’t happy with any of Vidgo’s features, you can cancel your subscription anytime. Just remove your credit card info from the Vidgo app before the week lapses.

On the flip side, if you’re happy with Vidgo, you don’t need to do anything! After the free trial concludes, your subscription to Vidgo will automatically activate and you receive the bill next month.

This post focuses on Vidgo’s simultaneous streaming features, but if you want a deeper dive, check out our full Vidgo review article.

How many devices can simultaneously stream Vidgo?

Most internet TV streaming platforms only allow 2 devices to watch live TV concurrently. Services like Hulu + Live TV, DirecTV Stream, and fuboTV have a 2 device limit. Meanwhile, Vidgo allows for a 3 device simultaneous stream. That holds true for all of Vidgo’s subscription plans.

Vidgo’s 3 device limit might be a negative for some power users. When the high-tier plans of fuboTV have a maximum of 5—or better yet, DirecTV Stream with 20—Vidgo’s simultaneous stream limit might seem paltry in comparison.

However, 3 devices with simultaneous streaming are more than enough for most users. It enables the folks to enjoy their movie night while the kids watch their cartoons. With Vidgo, the entire family can enjoy their favorite TV channels—at the same time.

Can I increase my Vidgo simultaneous stream limit?

Currently, Vidgo doesn’t offer additional addons or high-end subscriptions to increase the simultaneous stream limit. But, Vidgo is a growing platform. The service only started in 2018 and it’s expanding its offerings constantly.

Vidgo frequently upgrades its services by adding new channels and increasing device support. For example, in 2020, the platform only included 65 channels on its English Plus subscription—the basic subscription.

In 2022, Vidgo’s base subscription comes with over 100 channels—an over 40+ channel improvement! Add to that, also in 2020, Vidgo was lacking the MLB Network—a major oversight for a sports-focused platform. But now, Vidgo includes the MLB Network in its channel line-up.

It’s clear Vidgo is improving by the day. Eventually, the platform might introduce an update that increases its subscribers’ simultaneous stream limit.

Stay tuned with us to get updates on Vidgo’s simultaneous stream support!

How to watch Vidgo on Amazon Fire TV

Get Vidgo for your Amazon Fire TV device through the Amazon app store.

How to watch Vidgo on Roku

Vidgo Roku users can easily install the Vidgo app on their devices. You just need to search for “Vidgo” on the Roku store. Then, you should install Vidgo on your device, and you’ll get access to its full 100+ channel line-up!

Install Vidgo on your Roku device through the Roku Channel Store!

How to watch Vidgo on Apple TV

Neglecting support for the world’s most popular tech company would be a huge misfire for Vidgo. Thankfully, Vidgo provides full app support for all Apple TVs. You just need to search for “Vidgo” on the Apple App Store, install the app, and then you’ll be good to go!

Other iOS devices that include Vidgo support include iPhones and iPads.

Get Vidgo on your Apple TV app store.

For more info on Vidgo’s available apps check out our article on Vidgo device support!

Vidgo: Live TV for everyone in your family

Screentime is always a struggle for families with cable TV. Sometimes the NBA Playoffs can coincide with a season premiere of Mom’s favorite show. The only choice available for family members would be to record the show they’re missing or go to a neighbor’s house to watch the other program.

By
Brittany Storniolo and Sam Cook
-