There are now over 100 streaming services available for cord-cutters. Most services come in at a fairly low cost and stick to that price for a while. Other services, however, launch onto the market and then increase their prices, bit-by-bit (and sometimes rather quickly).

While not every service has raised its prices, let’s explore a few top services on the market, and how much they’ve increased their prices since they launched.

We found that over 10 popular streaming services on the market have increased their prices within the past few years. One even more than doubled its price only a year after launching.

Perhaps positively, most of these services increased the number of channels they offer in their packages, although that was not always the case. A few of DirecTV Now’s package sizes decreased after its 2019 price increases

The services we found that had some notable price increases since launching on the market include:

We’ll explore each of these services’ price increase histories in more detail below.

The live TV streaming services, such as Sling TV, Philo, and Hulu with Live TV, implemented the largest number of price increases from their launch time to the present date. Some of these were rather dramatic. DAZN US, for example, more than doubled in price since launching in 2018. By comparison, ESPN+ launched in 2018 in the US as well and has not yet raised its price.

Philo is an interesting case. The service launched in 2017 with very little fanfare. To be exact, before its nationwide launch, Philo was already serving live TV to college students for a low price. However, in 2017, the service pulled a Facebook and moved from the Ivy League to the Major Leagues.

Since 2017, Philo has technically never had a price increase. Instead, the service dropped its lowest-cost package in 2019. This effectively raised the price for anyone with the $16 per month option, however. In its two years, Philo has also massively increased the number of channels it offers, from a minimum of 35 to a minimum of 58 at this time of writing.

No live TV streaming service has had more price changes and package switch-ups than fuboTV. Like Sling TV, fuboTV launched in 2015. Unlike Sling TV, however, fuboTV’s focus was primarily on soccer and other international sports unavailable in the US from most major cable TV providers.

However, in 2017, fuboTV underwent a dramatic change in approach. It started added channels and changing up its packages. Then, in 2018, the service changed things up again. And again in 2019. All told, fuboTV’s price changes have not only been chaotic and heavy, but difficult to keep up with.

Anyone who started with fuboTV in 2015 is now paying more than 7 times what they originally paid. For its part, fuboTV has a very extensive package of channels, including sports and entertainment TV, as well as local broadcast networks. Still, the service has made it somewhat difficult for customers to keep up with the package changes. There were also a few other short-lived packages the service offered between 2017-2018, including a one just called “fubo” and one called “fubo Extra”.

At present, fuboTV is still one of the best options for sports, even with the continuing lack of ESPN in its packages.

Sling TV initially launched its service in 2015. During that time, the service only offered one streaming service package, called “Best of Live TV”.

Sling TV’s “Best of Live TV” offered 20 channels for $20 per month. The service was one of a few other options that launched in early 2015 and focused primarily on its additional channel add-ons.

Since 2015, Sling TV has gone on to add more channel packages but has only moved the base price up by $5 per month.

In 2016, Sling TV changed up its package offerings. It added Sling Orange, Sling Blue, and Sling Orange+Blue to its package options. The “Best of Live TV” package shifted to Sling Orange, with an increase in the number of available channels. Meanwhile, Sling began to offer a wider selection of channels overall.

Sling TV’s prices remained stable until 2018 when it increased the cost of Sling Orange to $35 a month. Beyond those changes, however, Sling TV’s prices have remained low, and the service has made very few changes to its service in the past 3 years.

With recent price hikes from other major services, Sling TV remains one of the best values on the market.

Much like Sling TV and fuboTV, Sony launched its own streaming service in 2015. PlayStation Vue initially launched as a PlayStation-exclusive streaming service, but quickly moved beyond just PlayStation consoles. However, the company never changed the name, which to this day has lead to a significant amount of confusion among cord-cutters looking to use the service.

Surprisingly, Sony’s streaming service has undergone few price hikes since it launched. What that does mean is that PlayStation Vue launched at a fairly high price compared to other services. It’s one of the few services that had a price decrease after launch, before increasing prices again to there they are today.

Sony increased prices in 2018 across all of its packages. To date, it’s packages are all about $10 more expensive than they were when the service launched in 2015.

Hulu originally launched in 2007 as a private Beta-version on-demand streaming service. The project was a joint effort between a few large media companies, including TimeWarner, 21st Century FOX, Disney, and Comcast. In 2017, Hulu expanded into the live internet TV market.

Since its 2017 launch, Hulu has only raised prices on its Live TV service once. The price hike was also extremely modest, at only $5 per month. At that price, Hulu also increased the number of available channels.

Uniquely, Hulu’s Live TV service has also included its premiere on-demand service as part of the cost. This makes Hulu one of the best values on the market in terms of total content offered for the cost.

In 2018-2019, Disney bought 21st Century FOX and is in the process of acquiring all of the remaining shares of Hulu. The service will be completed owned by Disney by 2020, at which point Disney may begin bundling its upcoming Disney+ service with Hulu.

Although the two services share a name, YouTube and YouTube TV share very little else in common. YouTube TV is YouTube’s live TV streaming service, offering a fair mixture of sports, entertainment, and local broadcast networks. The service started to roll out in select cities in 2017, then finally expanded to nationwide availability in 2018. 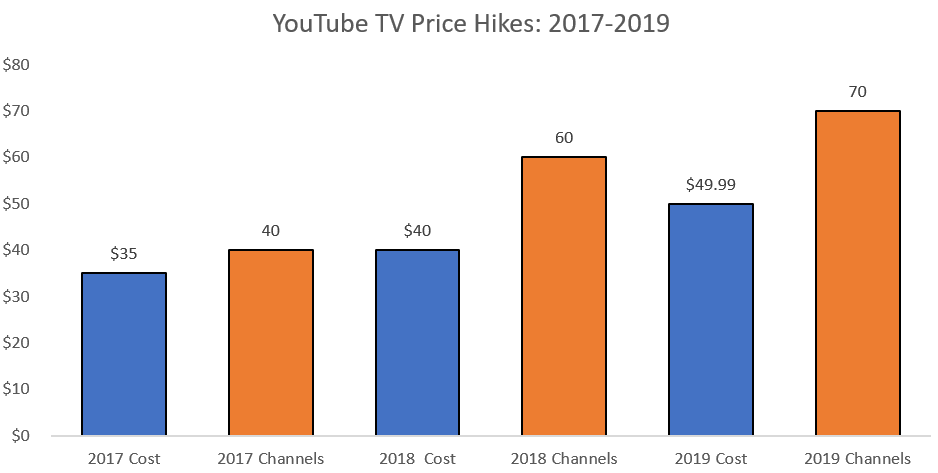 At present, YouTube TV is one of the only services to have raised its prices every year after launch. It’s also one of the more expensive services on the market, while also offering a notably large number of features.

For its first two years, DirecTV did not raise prices on its streaming service. Then 2018 hit. All of DirecTV Now’s prices increased by $5 per month that year. Then, in 2019, DirecTV Now completely changed the packages it offered, raised prices, and decreased the number of channels offered for its introductory packages in favor of adding HBO to those packages.

DirecTV Now’s recent price hikes have significantly hurt its business. The service is bleeding costumers and has lost over 20 percent of its subscribers after reaching a peak subscriber count in October 2018.

DAZN is an international sports streaming service. Outside of the US, it offers live and on-demand sports streams for every major sport. In the US, however, its main focus is on fight sports, such as MMA and boxing. The US version launched in 2018 with much fanfare and media attention.

DAZN brought its sports streaming service to the US at a rather low cost of $9.99 per month, with the first month free. For that, subscribers were promised over 100 major MMA and boxing events, as well as some soccer and other sports.

However, in 2019, DAZN decided to ditch that payment model. Instead, it changed the subscription to $19.99 per month, with a $99 annual subscription option. According to DAZN, users subscribing for the free month for single events and then canceling were making it difficult to maintain the service properly.

To note, DAZN is still a cost saver compared to paying Pay-Per-View. Its exclusive events make it a growing favorite among fight sports fans, although the change in pricing caused more than a few grumbles.

Some consider Netflix the original streaming service. While other options existed before it, Netflix’s 2010 launch marked a change in the streaming market. Since 2010, Netflix has continued to update its library of content and now focuses heavily on developing and delivering original content.

Netflix launched with just one subscription option in 2010. At $7.99 per month, the “Standard” subscription offered thousands of titles on-demand. In the coming years, Netflix also added a lower-cost “Basic” package (no simultaneous streams), and a higher-cost “Premium” option (multiple sharing options and higher-quality streams). 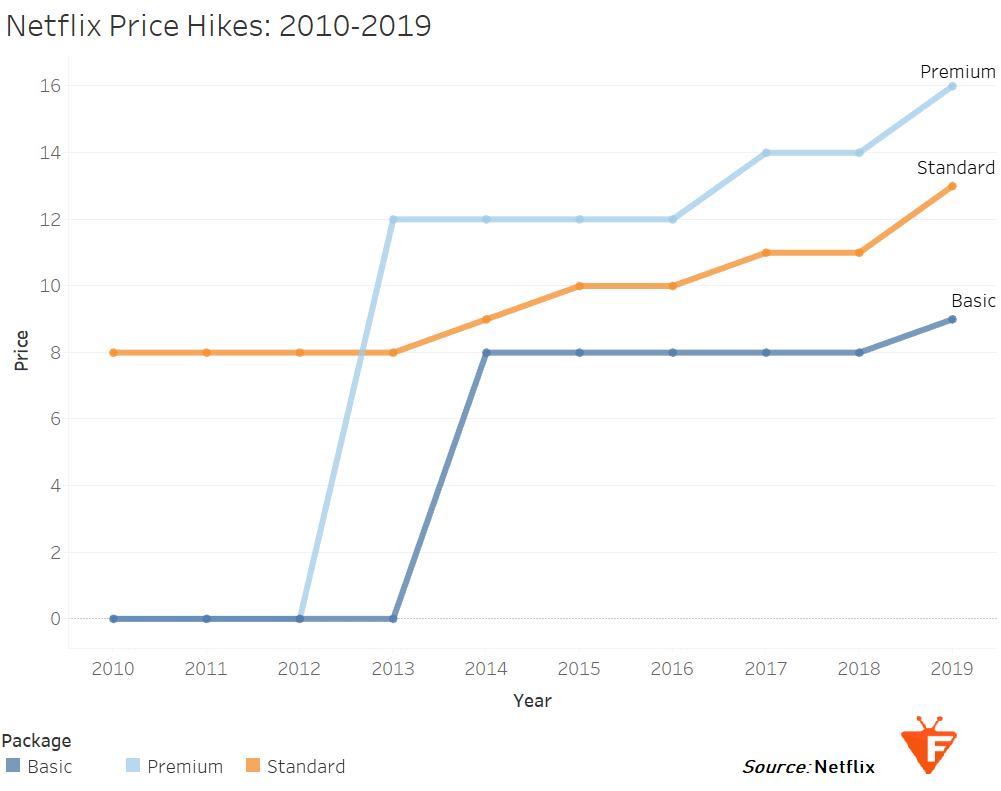 Netflix resisted price increases for several years, before finally edging up its prices a bit. Each new subscription option was met with a slight price increase. However, Netflix began slowing creeping up the costs on its Standard and Premium packages in 2015-2016. While a Basic subscription package comes in at close to what Netflix originally offered, the Standard and Premium packages are over $5 more expensive per month than when they were first introduced.

With over 100 streaming services on the market, expect there to be more price increases in the future. Additionally, expect some services to start lowering prices in order to better compete.

We’ve already seen some price decreases occurring. For example, Hulu lowered the base cost of its on-demand service to $5.99 per month in 2019, down from $7.99 per month. Hulu has always been inexpensive, and the price decrease brought its price back down to what the service initially launched with for its paid services.

Additionally, expect a significant amount of bundling to occur in the near future. Recent reports indicate that AT&T plans to roll its DirecTV Now service into an upcoming WarnerBrothers on-demand streaming service. This will create an option very similar to Hulu with Live TV, but the price may not be what many consumers are willing to pay.

Have any of your favorite streaming services increased in price recently? Let us know in the comments below!