It’s official. Netflix with ads is on its way here. Netflix’s plans to bring an ad-supported tier to its on-demand streaming felt a bit more real this week after news broke that the company struck a deal with an ad analytics company.

That could be a good thing for those who want to save some money. After all, Netflix increased prices earlier this year — basic plans now cost $9.99 and some subscribers pay $19.99 for the premium level. That’s after several price increases in just the past few years that we’ve already noted significantly exceed the rate of inflation.

And Netflix isn’t alone. All of the following streamers already offer ad-supported tiers — or will offer them in 2023: Netflix, Disney+, Discovery, Hulu, HBO Max, Paramount+ and Peacock.

But what makes an ad-supported streaming service really work, and what lessons could Netflix take from its competitors? Let’s dive in.

The cheaper the ad-tier, the better

For most Americans, ad-supported streamers are probably pretty attractive — if the content comes at a lower cost. A 2022 Tivo study estimates that 65% of US viewers will tolerate TV ads if it means the content is free.

But most streamers don’t offer free ad-supported tiers. (Just Peacock offers a free plan in the list above.)

Analysts currently expect that subscribers who watch Netflix with ads will pay between $7-9 per month. Even at the lowest price point, that’s only a 30% price cut from the ad-free tier.

Hulu, by contrast, offers an ad-supported tier at half the cost of its ad-free tier ($7.99 vs. $14.99). That kind of price cut seems to really work. In 2019, Hulu officials said around 70% of their then 82 million subscribers were on an ad-supported tier.

Too many ads is … bad

Some ad-supported plans make viewers far happier than others. Data published by Whip Media in August 2022 suggests that HBO Max’s ad-supported tier has the most satisfied subscribers. 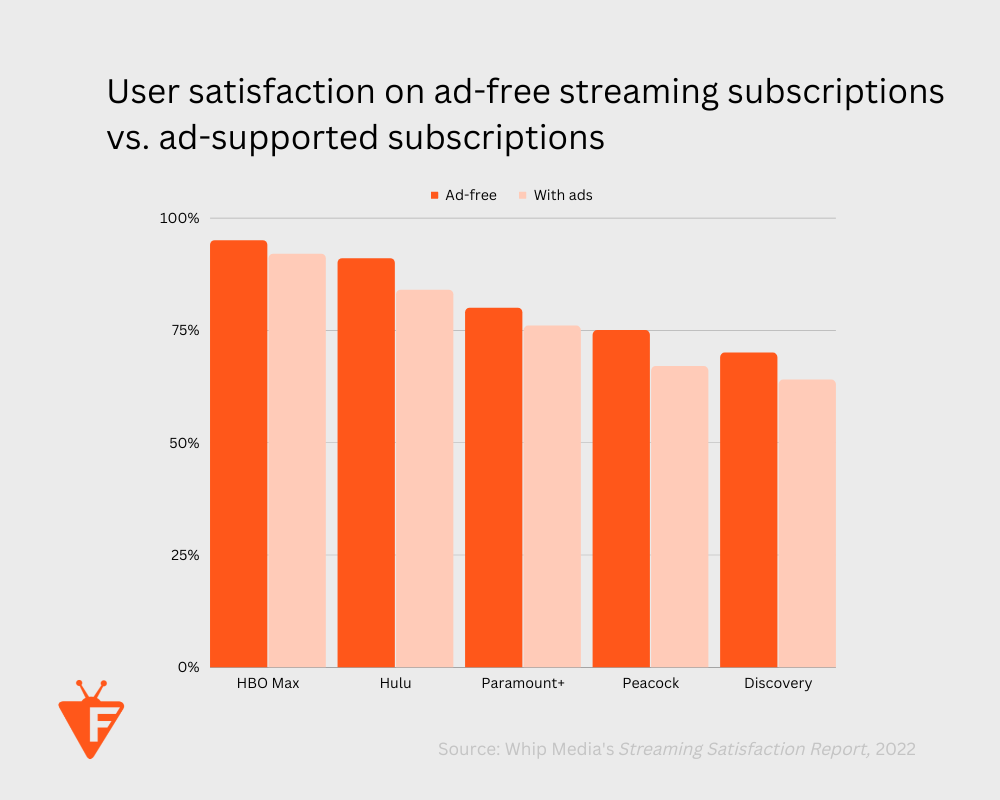 Two factors distinguish HBO Max’s ad-supported tier from the rest of the pack:

The data suggests that people who pay more to watch without ads are more satisfied than those who go the ad-supported route, but not by much. A lower ad load and more ad variety goes a long way to keep ad-supported viewers happier. Netflix, take note!

If you really want to save money by subscribing to an ad-supported tier, choose wisely.

If Netflix wants its ad-supported tier to succeed, it will price its ad-tier lower, keep ads per hour low, and air a wide variety of ads during commercial breaks. We’ll be watching to see what happens!