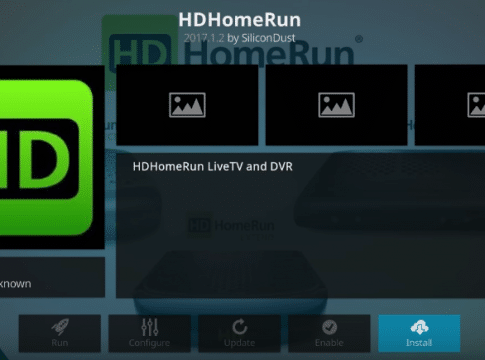 There are many guides that show you how to pull OTA (over-the-air) feeds into Kodi, but many of them are quite dense. We’ve put together this quick and easy resource to help you get up and running faster.

This article you’re about to read contains:

Before you continue, you’ll need to download and install the free, open source media player known as Kodi. Kodi is available on Mac, Windows, Android and many other platforms. You’ll also need an HDHomeRun device that works with OTA antennas.

The Basics: How OTA Works on Kodi

A Kodi-powered OTA system consists of two main components: an OTA signal grabber/converter (the back-end) and the Kodi player itself (the front-end). Some type of OTA antenna add-on is also required for OTA integration to work on Kodi, since the basic version of the Kodi player lacks native OTA antenna functionality. And of course, you’ll need an OTA antenna as well.

Why we recommend HDHomeRun

We think HDHomeRun is the best way to intefrate OTA antenna feeds with Kodi because it shrinks the entire OTA antenna integration process down to a few simple steps.

Note that HDHomeRun is not an OTA antenna itself. Rather, it connects with an antenna to pull all the live TV feeds into a neat interface that can be accessed via a Kodi add-on, which we will discuss below.

HDHomeRun reduces the amount of hardware you have to install and configure down to a single plug-and-play device. Another reason to like HDHomeRun is the excellent official HDHomeRun Kodi add-on, which the company maintains and updates on a regular basis. A new alternative to HDHomeRun called Tablo has some interesting features, but it’s not as reliable and is also significantly more expensive.

Before we go any deeper, here are a few common technical terms that you’ll run into on this and other cord-cutting related guides.

The front-end is the interface you use when watching OTA broadcasts. The front-end of your OTA signal snatching system will be Kodi, but other similar players like Plex can also receive OTA feeds. The front-end can’t grab the OTA signal all by itself, but it can play the signal once it’s properly formatted.

The back-end is the part of the OTA system that captures the TV signal and converts it into a format that Kodi can understand. You can either use a device like HDHomeRun as a back-end or you can download a software back-end and use that instead. Software back-ends tend to hog memory, which is why we think it’s a better idea to use a dedicated back-end device.

PVR stands for Personal Video Recorder. A PVR system could just be a software application that saves video to your hard drive. Or, it could be a separate piece of hardware (like TiVo, for example).

EPG stands for Electronic Program Guide. EPGs have menus that allow you find out what’s on and choose what you want to watch.

NAS stands for Network Attached Storage. Basically, this is just a stand-alone hard drive that can connect to your home network. If you use a NAS instead of your computer to download TV shows via your OTA antenna compatible Kodi system, you won’t have to worry about your computer’s hard drive filling up.

Picking Out Your OTA Antenna

Amazon Basics and Mohu are two of the most popular brands for OTA antennas. Both brands have similar prices and specs. However, Mohu’s antennas come in several different models and generally look more stylish. Also, Mohu’s antenna with the longest range extends a bit farther than Amazon’s.

Four different types of Amazon Basics OTA antennas are available (25 mile, 35 mile, 50 mile and 60 mile) and they are all capable of pulling in 1080p HD quality signals.

The 60 mile model is interesting because you can mount it outside. It could be a good choice if you live in the middle of nowhere, but it may not be ideal if you live near a metropolitan area due to the fact that interference could become an issue.

The Simplest Way to Set Up an OTA Antenna on Kodi

There are several ways to setup an OTA antenna in Kodi, but HDHomeRun provides a quick, cheap and reliable option. More complicated installation methods require you to do things like install a Linux server or open up your computer and install a TV tuner card. HDHomeRun, however, provides a complete plug-and-play solution for porting OTA channels to Kodi via your antenna.

After you connect HDHomeRun, it will give you a link to the HD Home Run website. On the top left part of the screen you will see a box that indicates the number of channels that your HD Home Run device has discovered.

Follow the steps listed below to install the HDHomeRun add-on for Kodi.

Once you open HDHomeRun, you’ll be able to flip to whatever channel you want to watch. The add-on will be able to detect the live TV stream that is now being transmitted by the HDHomeRun box.

The video camera icon on the far left is for configuring your video playback. The two small buttons on the right allow you to turn the volume up and down. The second button from the left allows you to fine tune your audio settings.

The HDHomeRun system works perfectly well without DVR, and is a good solution for streaming live TV. But if you want the ability to save shows for later on your hard drive, you may want to consider HDHomeRun’s DVR service. For only $35 a year, it’s actually not a bad deal.

With a subscription to HDHomeRun DVR, you can:

All 3 HDHomeRun models are super easy to set up, but each one has a different set of features that you should know about before you commit.

If you’re priority is OTA antenna integration, be sure to check which kind of wireless router you have before you buy.

If you have a new wireless router

If you have a new 802.11ac type wireless router, then you don’t need as much power and you can save some money by going with HDHomeRun Connect.

If you have an old wireless router

Note: HDHomeRun Prime is only for people who have cable and want to pipe cable TV channels to Kodi and other front-end video systems. It doesn’t work with OTA antennas.

As mentioned above, the main benefit of HDHomeRun Connect is that is a bit cheaper compared to HDHomeRun Extend. However, it’s also not quite as powerful. You need a new 802.11ac wireless router if you want to get HD via this device.

Connect currently has a 4 out of 5 star rating on Amazon. That’s an impressive stat, considering that over 1,600 people have reviewed it. Right now Connect is the #1 best selling item in the External TV Tuners category.

HDHomeRun Extend has extra horsepower that allows it to broadcast HD quality signals across older 802.11n wireless routers. It’s nearly twice as expensive as HDHomeRun Connect, but could be worth buying if you have a 802.11n router and intend to stick with it.

Like Connect, Extend has plenty of reviews (over 1,600) and an excellent 4 out of 5 rating on Amazon.

If you don’t have cable, don’t get HDHomeRun Prime. It doesn’t have OTA antenna functionality, so there’s no way to hook it up to an antenna.

Like Connect and Extend, HDHomeRun Prime is doing quite well on Amazon. It has over 1,600 reviews and a 4 out of 5 star rating.

HDHomeRun’s main competitor is Tablo. Among cable-cutters, Tablo has a bit of a bad reputation for buggy live OTA performance. However, its devices do have tempting looking feature lists.

Like HDHomeRun, Tablo devices offer easy plug-and-play installation. Another similarity is that Tablo also has a branded add-on that allows you to stream video straight into Kodi.

Another brand new product from Tablo is Tablo DUAL. The most interesting thing about DUAL is its built-in 64 GB NAS hard drive. DUAL is pricey compared to the competition, though– and it’s not available via Amazon yet, either. You have to either order through the Tablo store or pick one up at Best Buy if you want to buy one.

The original version of Tablo allows you to connect up to 4 devices simultaneously– but some Tablo owners say it’s buggy and not very reliable.