Roku Ultra Review 2019: The Device That Made Me Ditch My Amazon Fire TV

It’s hard to ignore the Roku’s dominance in the cord-cutting market. Apple TV and Amazon Fire TV may be known, but they don’t hold a candle to Roku’s brand dominance. That said, the device maker has a large library of iterations for its products, including what it calls it “ultimate streaming player”, the Roku Ultra. Does the Roku Ultra really live up to the company’s self-styled hype?

The Roku Ultra is designed to give cord-cutters every possible feature they might want in a TV-connected streaming device. Offering HD, HDR, and 4K streaming, access to almost every popular streaming app on the market and a unique headphone jack that lets you listen to your streaming content with some bit of privacy. As with any streaming device, the Roku Ultra is not without its faults, but finding faults often felt a bit nit-picky, at best. The Roku Ultra is undoubtedly more than it appears, with a price tag that is altogether fair for what you’re getting.

How Much Does a Roku Ultra Cost?

The Roku Ultra costs $99.99 if you buy direct from Roku. However, you can also get the device discounted from other dealers. For example, Sling TV offers a deal that lets you snag the device for just $49.99 if you sign-up for 3 months of Sling TV. If you’re new to cord-cutting, that’s a pretty solid deal, especially since you may find you need both an internet TV streaming service and a TV streaming device to watch it with.

Finding negatives about the Roku Ultra felt a bit like picking at straws, though we certainly did find a few things to complain about, amidst the many things this device does well. 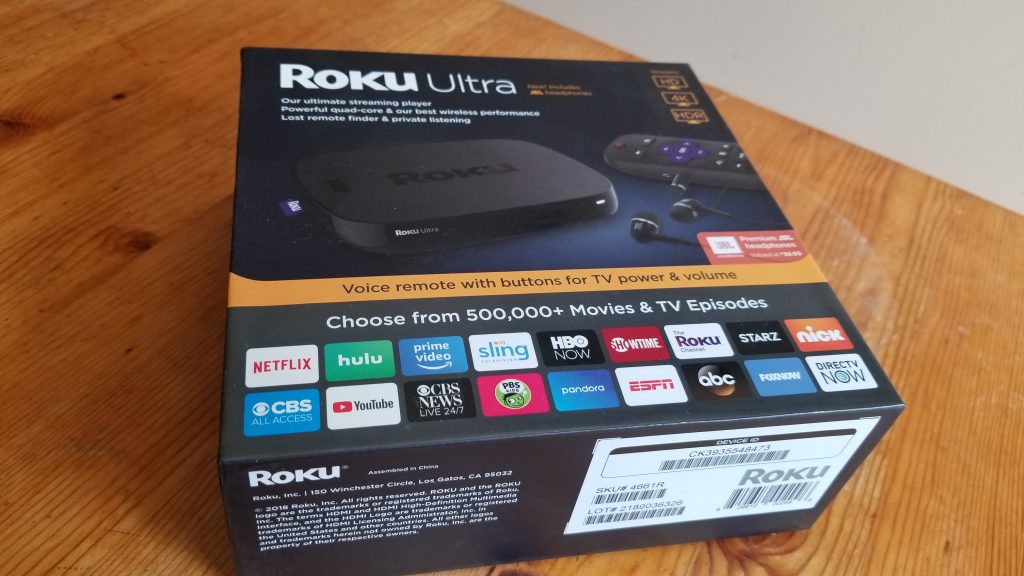 This device is weighted down with some awesome features, although specs-wise you might be surprised by a few areas that are lacking.

The Roku is small, but not nearly as slim as you might expect or want. At 4.9 x 4.9 x 0.85 inches, it’s still a fairly small and mostly thin device that won’t take up much space near your TV. At 8 ounces, the Roku Ultra just slightly heavier than some of the top-tier mobile phones on the market.

If you’re hoping for storage, this device isn’t for you. It’s made for high-powered streaming, so its stats match that focus. With the Roku Ultra, you’ll get:

The Roku Ultra supports up to HD, 4K, and HDR streaming quality. It works with TVs that offer video qualities up to 2160p, and up to 60 frames-per-second (fps). 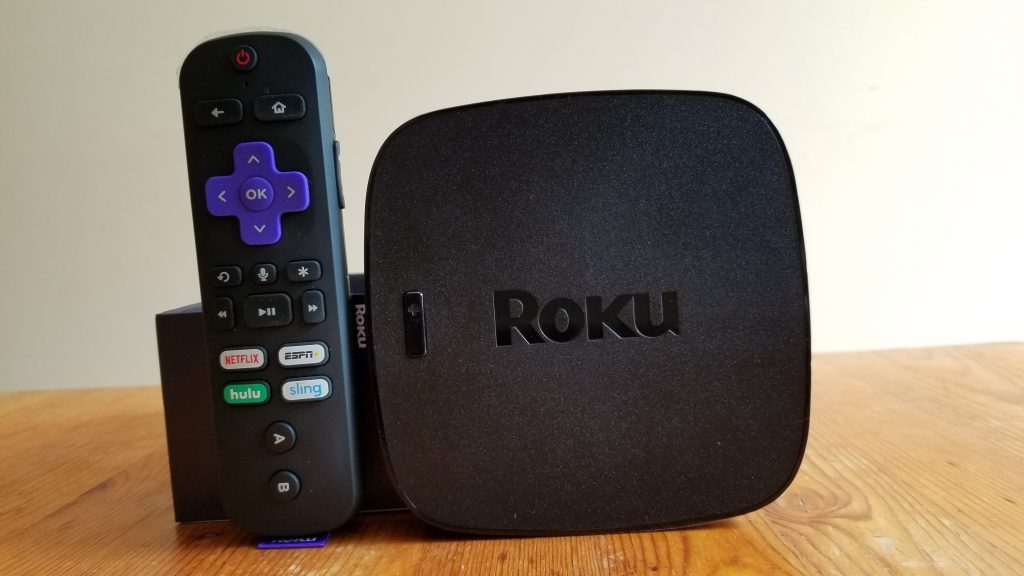 Small, square and black appear to be the “in” thing for TV-connected device designs right now, and the Roku Ultra goes right along with the crowd. Unlike the Apple TV or Amazon Fire TV Cube, the device has nice rounded edges and Roku’s purple cloth calling card.

There’s nothing spectacular or memorable about unboxing your Roku. The company goes full, cheap, uncharacteristic cardboard for the internal box designs, but thankfully, makes all of the components easy to get out of the box. Everything is designed to make the process as quick as possible between unboxing to streaming.

The Roku treats you with a pleasant sound at the outset with the words “Roku” hopping on the screen as it loads. After that, you’ll be walked through the standard connected-device setup process.

Once everything is turned on, the Roku will pair your remote to make sure it’s working. 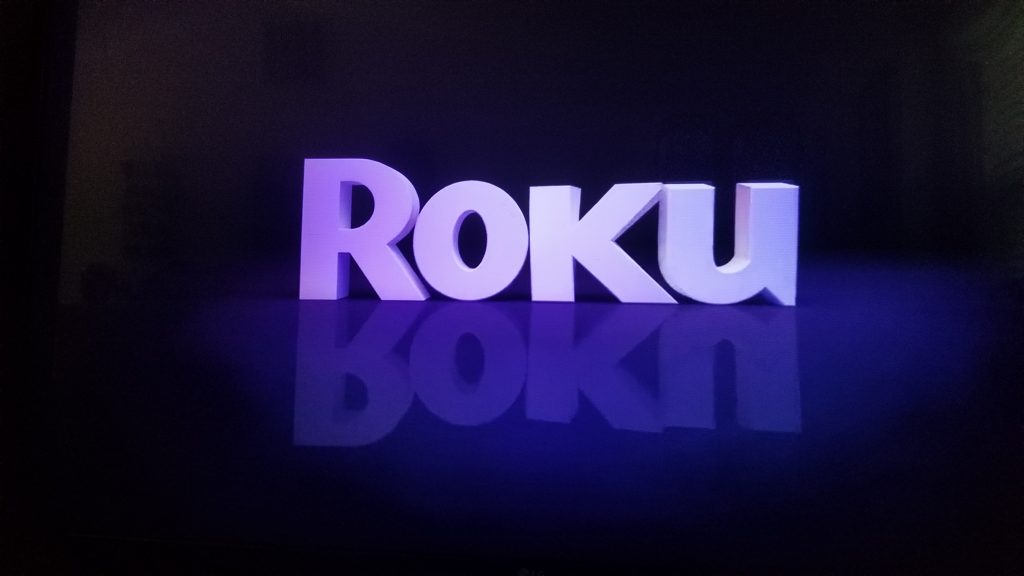 After that, you’ll need to connect to your WiFi network or connect via Ethernet. 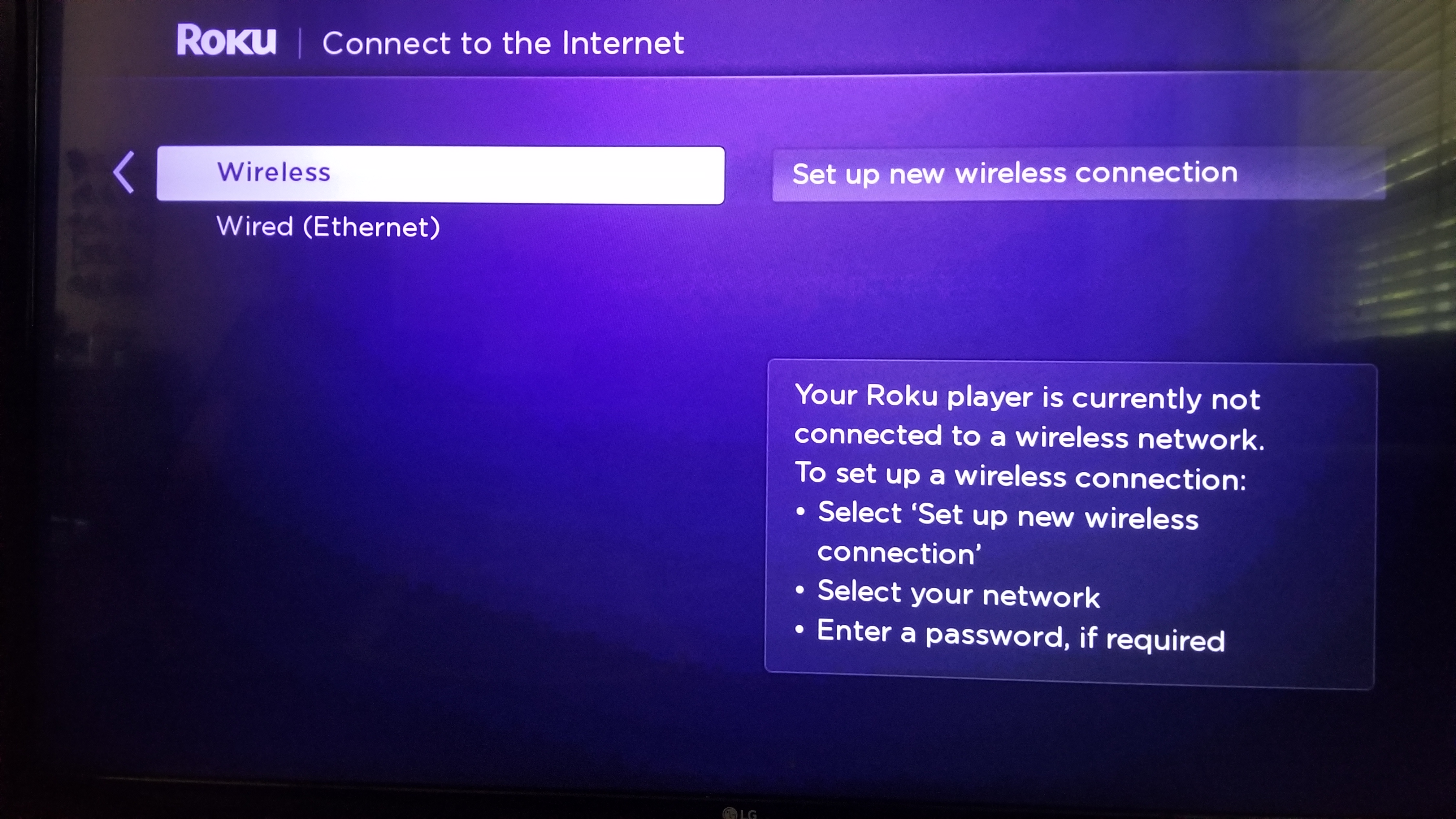 Once logged into your home internet, your Roku may require an update. This will likely only take a few seconds, depending on the speed of your internet connection.

From there, your Roku will guide you through your display settings, which you can tune automatically. It will also walk you through making sure your remote effectively manages the volume on your TV.

Finally, you’ll need to activate link your Roku to either an active Roku account and link your device to your new account.

Fair warning: Roku requires you to enter some personal information during the account registration process, including home address, gender, and a payment method. “Payment?” you ask? Yes. Although the Roku does not require you to buy any apps, it allows you to make subscription payments using its Roku Pay service. It suggests adding that information is optional, but during my account creation process, I found I couldn’t proceed through the setup process without forking over my PayPal account.

After you’ve successfully created your account, your Roku will install a few apps you selected during the account creation process as well as some other apps the company feels you may want.

From there, the interface is the standard one you’d get with the Amazon Fire TV Stick.  If you want to add in Amazon Alexa skills, you’ll need to download the Amazon Alexa app, pair your device with the app, and install the skills from there. However, that’s not necessary to use the device to control your TV.

It didn’t take long to figure out why the Roku is a popular streaming device. Compared to Amazon’s Fire TV devices, the UI is incredibly clean and efficient. It’s easy to get through the device menus to find exactly what you’re looking for. In fact, if you’ve only ever used Amazon Fire TV devices, this UI might be a breath of fresh air and just enough to make you a Roku fan. 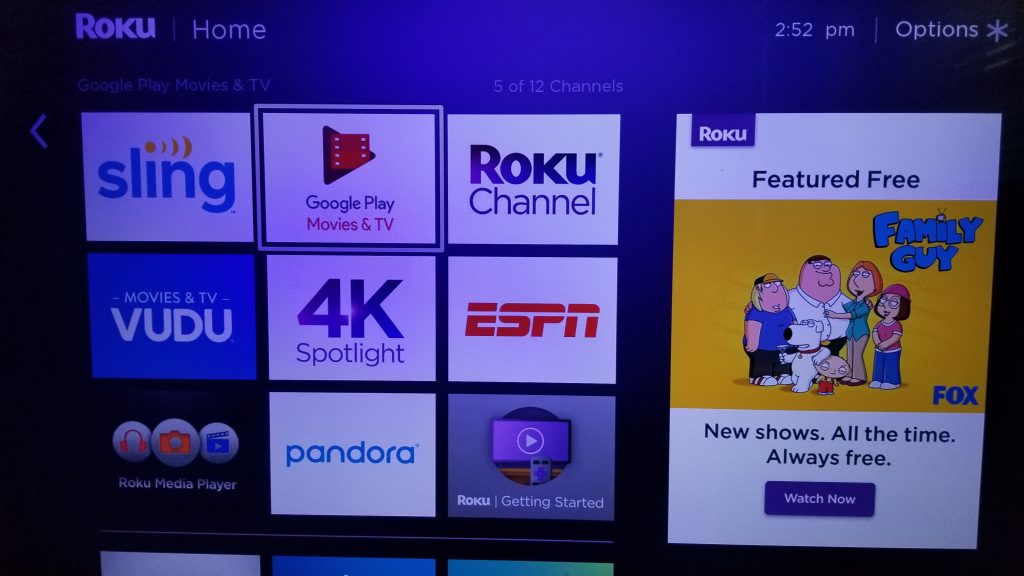 The UI offers the main categories on the left side of the home screen, and you can easily navigate to each menu item, or back to the home screen, within seconds. There are menu options for just about everything you’d need for streaming purposes, including the app store, movie rental and purchasing options, featured apps, and even a section just for TV Everywhere apps.

The design of the user interface is about as user-friendly as you’re going to find in this market. It only takes seconds to get to anything you might be looking for. Even the on-screen keyboard wasn’t difficult to use.

The word “snappy” is probably over-used in device reviews at this point, but there’s hardly a better word to describe it. The UI was snappy, and everything shifted between screens rapidly.

The Roku was definitely designed for TVs. Unlike Amazon’s Fire TV UI, the design of which seems sort of like an afterthought to the product, Roku’s UI fits well into your TV’s screen.

The remote does exactly what it’s supposed to do. The quick launch buttons are useful, but again, not really that necessary. The volume buttons work well, and the button layout is altogether properly thought out.

The Roku has apps galore, but we took a few apps for a trial run, just to see how the device handles its core purpose (streaming).

The Roku has a few pre-installed apps, including Netflix, ESPN+, Hulu, and Sling TV, as well as some pre-installed channels that direct you to some advertiser-based content (most notably, Fandango). Beyond that, there isn’t much there, but you can have the service add apps for you during the account setup process.

Adding apps was quick and fairly painless. You’ll find apps in the “Streaming Channels” section of the menu. From there, the apps are categorized, or you can search for specific apps to install. You can then add apps by clicking on the app you want, and then clicking OK to add the channel.

There are a few nifty customization options available through the Roku Ultra.

For example, you can choose between a few different tones for the remote finder feature, including the theme song from Game of Thrones. You can also change the theme (there are over 50 pre-installed themes), and add a screen saver. 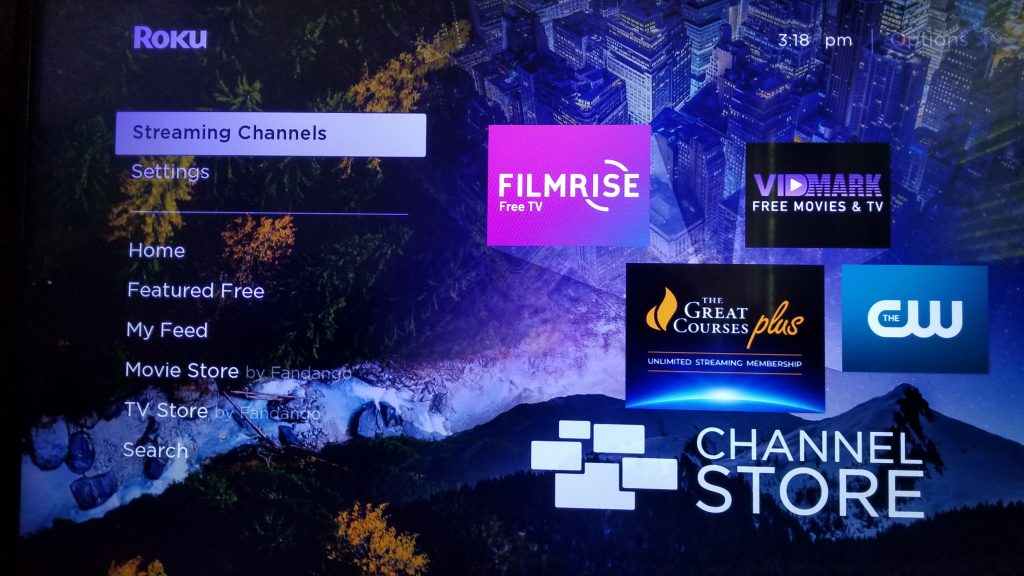 There’s little to say other than the fact that the apps we tested ran well for the system.

At $99 a device, you may feel like your wallet is crying out for mercy. But once you start digging into the Roku Ultra and its copious number of features, you’ll find that the device is very well priced, and in fact, might be underpriced for what you’re actually getting. Granted, Roku subsidizes the price by turning you into a profit-generating machine even after purchase, but it might be worth it.

As a long-time Amazon Fire TV user, I’ve been on #teamfiretv fairly rabidly. But taking the Roku Ultra for a spin has left me wondering whether I’ve been rooting for the wrong team all along.

The Roku Ultra significantly delivers on many of its advertising promises. Yes, you can stream in HD. Yes, you have access to thousands of apps. Yes, the device makes it possible to find your remote at the push of a button, or to listen to your shows or even your Pandora music privately while walking around the room.

Somehow, all of these features feel like they should come at a much higher price. But they don’t. The Roku Ultra is super cheap for the options. And the fact that Roku includes a pair of headphones valued at $40 is fairly impressive.

Not impressive is the fact that Roku monetizes its users so heavily. Product placement and advertising on the device are pretty heavy. It’s quite obvious Roku is collecting user data to sell to third parties. That said, it’s also clear Roku is doing as much as possible to make sure its advertising arm isn’t intrusive.

Being a power user and not a product designer, I found there’s little I’d change about the Roku Ultra. If you’re using other streaming devices, you may want to strongly consider making the switch (I know I am).

Tech, video games, and a good book. I love all of them, and I'd write about all of them if I had the chance! I've been a teacher in the past, now a writer for tech-related news, guides, and information.
Final Verdict
8
Our Rating Excellent
Buy Now