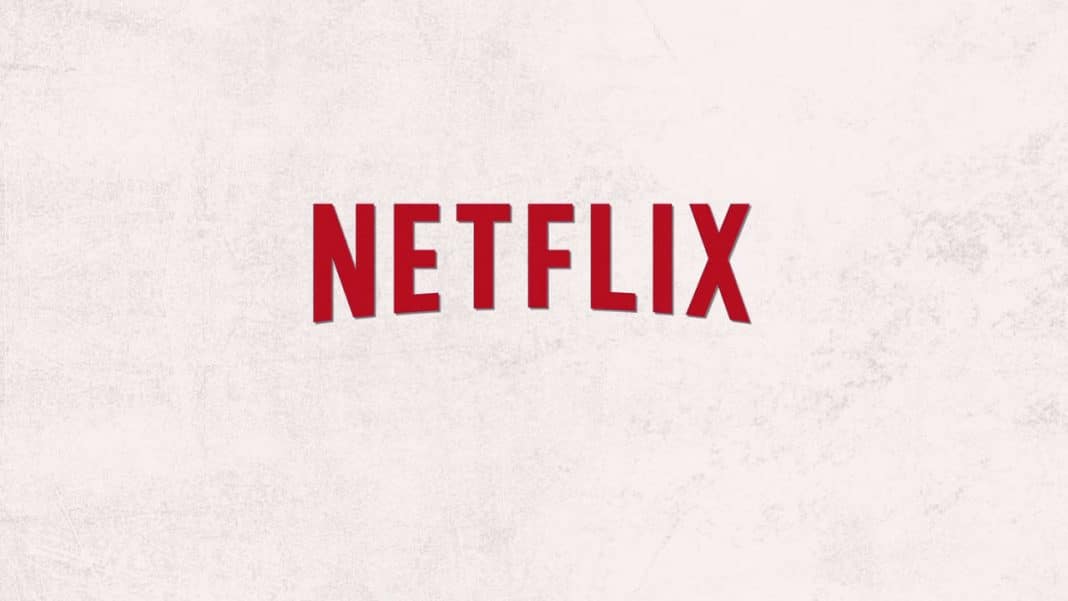 When Netflix announced an open war on virtual private networks, most users, VPN and DNS services were skeptical. Several months later, many of the most popular services that once openly advertised their ability to provide access to the American Netflix library are no longer trying. Some have even wiped clean from their websites any hint that they ever provided such services in the past. Yet despite the overwhelming feelings of defeat from many international subscribers, several prominent VPN and DNS services still effectively offer backdoor access.

VPNs and Users Fighting Back

Some online forums, such as the subreddit /r/NetflixByProxy, offer a resource for various users looking to find viable workarounds to Netflix’s VPN blocking. Although the subreddit currently only has a small number of subscribers (less than 3,500 at the time of writing), many of those posting are finding exactly the answers they’re looking for.

The active community was quick to verify his suggestion, with several other users benefiting from the discovery:

It appears that Getflix, among the many VPNs and SmartDNS services available, are still putting up a fight against having its service blocked by Netflix.

The fight to unblock Netflix is important for many VPNs. For many, financial success is fully dependent on customers having a reason to use their services. While virtually all VPNs advertise the security and privacy benefits, a fair number of VPN users only use such services to circumvent geographic content blocking. As such, many VPNs and DNS services were advertising their services’ ability to bypass such blocks as a key selling point.

Not everyone is finding success, however. User HeroicTaco, for example, posted about functionality issues with ExpressVPN, one of the more popular options for international users attempt to bypass Netflix geoblocking:

Of the 2 responses, one in particular highlights the cat and mouse game between VPN providers and Netflix:

Unfortunately, HeroicTaco is not alone. Many others are finding that some of the most popular services, many of which still advertise that they can unblock “any website”, fall short on their current claims — as least as far as Netflix goes.

Putting Popular VPNs to the Test

We decided to take a look at some of the most popular VPNs that were used in the lead up to Netflix’s current campaign. This includes those that are currently advertised as still capable of bypassing the geo-blocking. We not only tested the services, but also contacted the VPN companies directly, inquiring about whether they still work and their perspective regarding Netflix’s current policy. What we’ve found is that some of them are actually making good on their claims and do indeed still work, while others are not. Some, according to their representatives that we contacted, are working on new methods to make their services work yet again. Overall, the reality of what we’ve found is pretty clear: Netflix has put up a significant and highly successful blockade for most, but not all, VPN services.

Disclaimer: When we identify a service as working or not working, it is important to note that this was our experience, and may not be representative of results for other users.

ExpressVPN is among the most popular VPNs in the world. The service boasts having over 1000 servers in 87 countries. The company also operates 136 VPN locations, using 256-bit encryption with its servers that’s SSL secured.

ExpressVPN began taking customers in 2009. In that time, the company has aligned itself rather strongly with the internet privacy and freedom movement. The company operates a very active blog that champions these issues, while also covering different topics related to internet security and privacy. ExpressVPN currently has software that covers all of the following systems: Windows, Mac, Android, iOS, iPhone, iPad and Linux.

When we took ExpressVPN for a spin, we were expecting positive results. This was based on information directly given to us by an ExpressVPN representative:

What we found was that ExpressVPN’s services worked as advertised. Their claim that their service works with Netflix held up to our testing.

We were able to get into the American Netflix using their Seattle server. 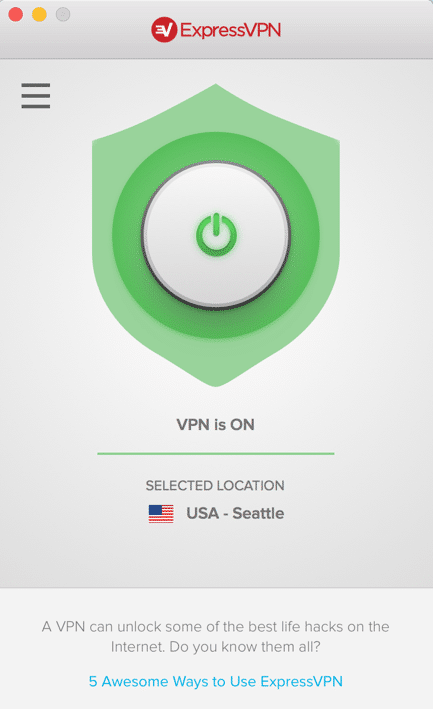 Launched after Netflix began blocking VPNs and other proxies, VIPDNSClub openly advertises its ability to get around content blocking. The service is, at present, small, with every intention of remaining small as well. On their website, they stress this point: “Our strictly limited door closed policy will ensure this service stays exclusive and we don’t cause any attention. We don’t want to be big, we just want to provide a highly professional service to our VIP members.” As such, VIPDNSClub’s primary goal is to avoid drawing too much attention to itself in the hope that it can stay one step ahead of Netflix.

When we contacted VIPDNSClub about their Netflix policy and procedures, their representative had this to say:

To verify if there is any truth to this, we tested out the service ourselves. The DNS servers that were provided to us worked without a hitch.

Unotelly was a popular option for international Netflix users trying to access American Netflix for some time. However, as many users on the /r/NetflixByProxy subreddit discovered, UnoTelly was also one of the first to face the Netflix chopping block.

To be fair, at the time of writing, UnoTelly does not actively advertise its services as capable of, or made for, getting around geo-blocking. This, however, is more of a recent change. Less than a year ago, they were presenting a very different use case for their services.

Having wiped their site clean of any indication that they ever supported this effort, Unotelly now focuses specifically on privacy protections, touching on several key points with their service: parental content controls, malware and adware blocking, general privacy protections, DNS hijacking and poisoning protections, protection from ISP spying and their secure VPN servers. In fact, they go so far as to say that use of their service for any other reasons is not permitted. 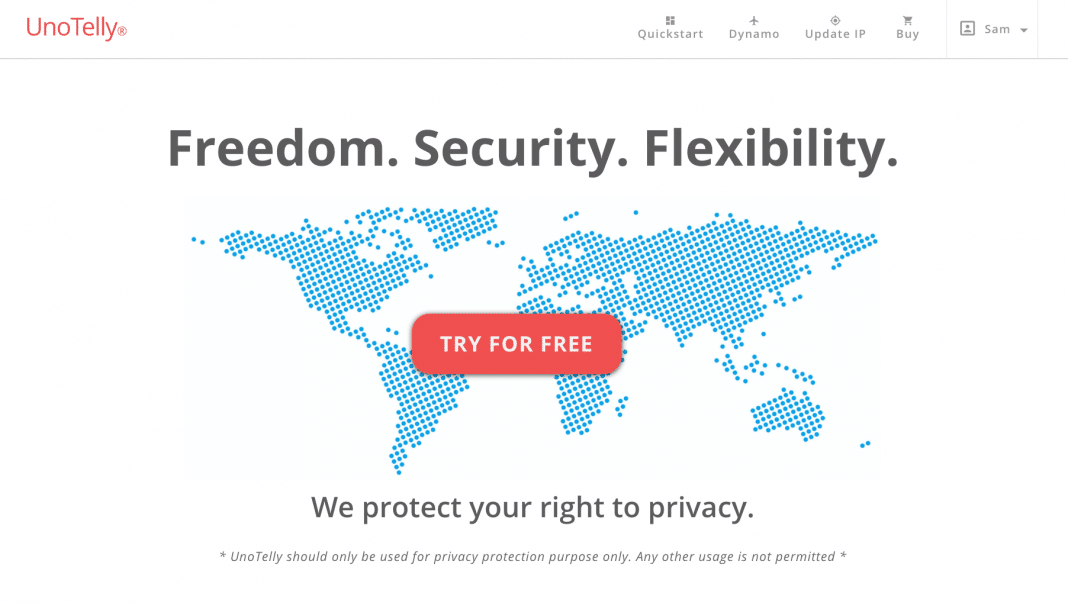 After logging into the UnoTelly region picker panel, we received the message shown below. 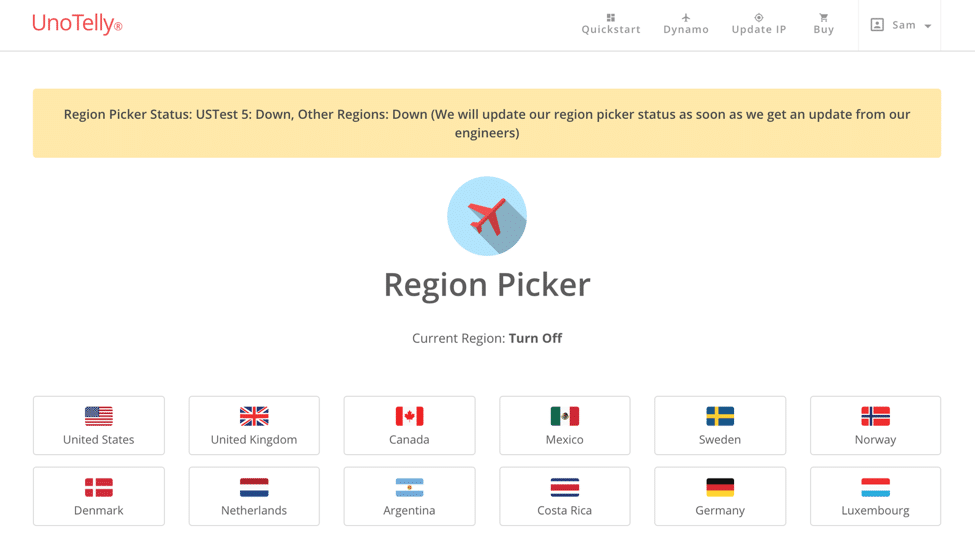 It stood out to us that there was one server that was being singled out in the message: USTest 5. Upon further investigation, it seems like this server was set up specifically to get users into the American Netflix. We have not verified this on our end (as all the servers were down at the time), but we believe it to be true.

After reaching out to UnoTelly about the message, we received the following response. 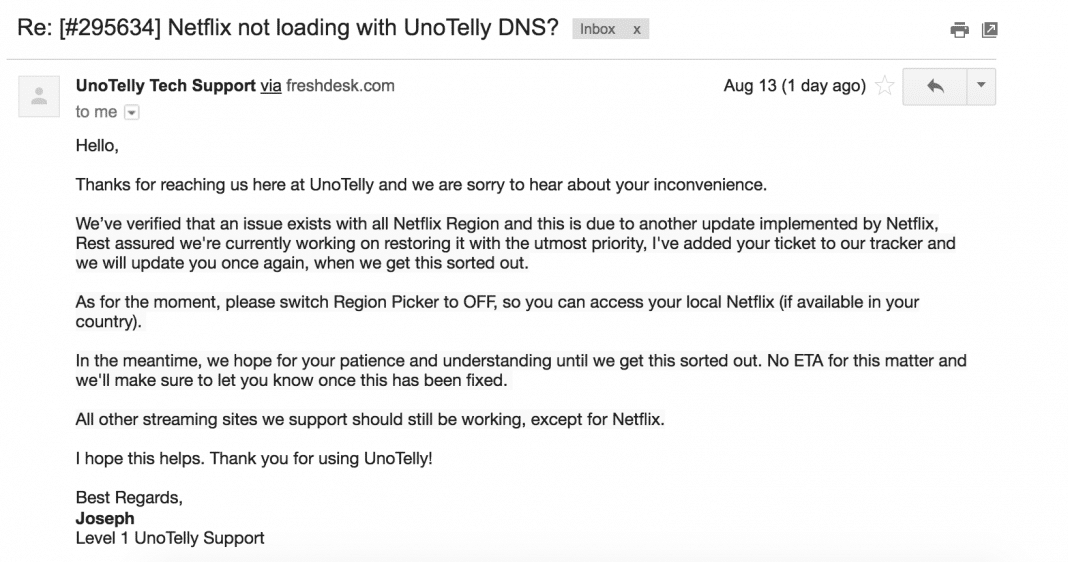 Contrary to the messaging on their website, it seems like UnoTelly is actively working to continue providing a way for international users to get into the American Netflix.

We are not sure how long UnoTelly’s server has been blocked by Netflix’s recent update. However, there appears to be some indication that UnoTelly is actively trying to find an effective workaround.

TorGuard was among the most popular VPNs operating prior to the Netflix shutdown. However, it appears Torguard’s shared VPN servers have lost the ability to bypass the Netflix geo-restrictions a few months ago. Instead, they seem to have switched to offering dedicated IPs to those who are truly adamant about accessing the American Netflix. This was noted on the /r/NetflixByProxy subreddit by user Dinkenflicka.

However, half-way through the sign-up process, we received the following message from TorGuard.

However, after emailing TorGuard directly, we discovered that they still were available.

We were disappointed to find out that even TorGuard’s dedicated IP did not seem to work properly. After attempting to connect to the server, we were hit with a “WAIT” status indefinitely. 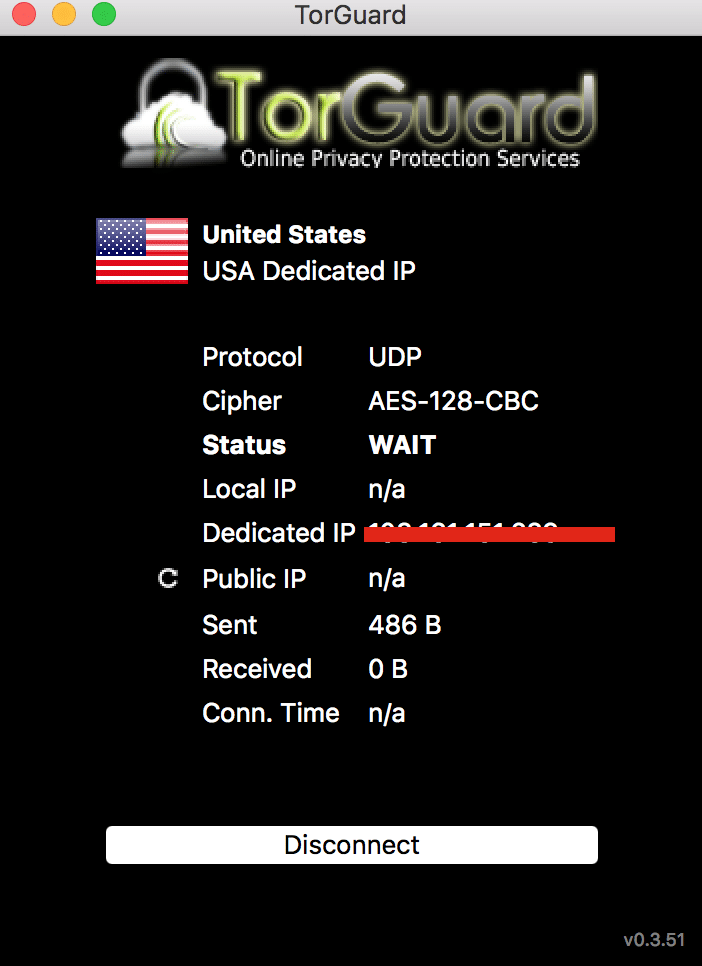 In the end we just decided that the trouble wasn’t worth it, and to cancel our TorGuard subscription instead.

It is worth noting that TorGuard does not provide refunds on dedicated IPs, and there is no free trial you can use, unlike other services.

The Fight for Survival

Netflix likely has good reasons for taking a hard line on VPNs. The company is ultimately beholden to its content providers, many of which often use regional licensing methods to sell their content. Many people view these geographically-based licensing methods as archaic. However, every time a studio or production company licenses their content to a different regional provider, they do so with the potential for make money off of it. For content licensing providers, it’s a financial move that makes a lot of sense. For Netflix subscribers, it can feel like an unfair practice.

On a related note, Netflix users are not paying the same price everywhere. In some countries, Netflix makes more money per customer than from their U.S. subscribers. However, the fact that some countries have much smaller libraries has led to an understandable amount of discontent from many non-American subscribers. The fact that they are often paying more, but getting less, than their American counterparts has been a source of complaint for some. VPNs and DNS proxy services were capitalizing on this by providing an avenue through the roadblock many users believe should not exist.

The question many may be wondering is whether Netflix can find a way to satisfy both its international base of subscribers and its content providers without further compromising content and quality. It’s something many international users are hoping Netflix will find an answer to sooner rather than later.