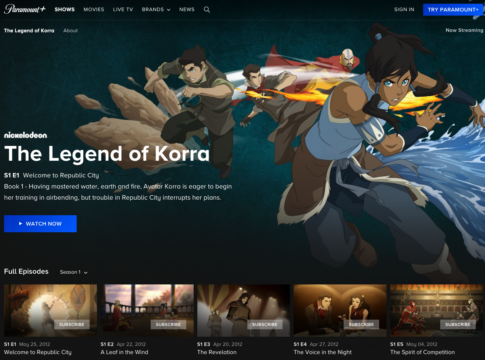 The Legend of Korra is a 52-episode series set in the Avatar universe. While it has been years since its creation, the show which originally aired on Nickelodeon has a cult following more rampant than ever. The series takes place 70 years after the Avatar: The Last Airbender story arc ends with new characters, a new plot line, and new settings. In other words, it’s an Avatar sequel. If you couldn’t get enough of the show that became one of the most influential of its generation, then you’ve come to the right place.

The 52 episodes are set across four seasons, also known as “books” in the series. The series ran from 2012 to 2014. Now they are available on a variety of streaming providers so you can relive one of your favorite series over again.

Where to Watch The Legend of Korra

Streaming The Legend of Korra on Paramount Plus

Paramount Plus is the streaming service of the CBS network. For a subscription of $5.99 per month (plus commercials) you will have access to all 52 episodes of The Legend of Korra. You will also have access to many other comparable Nickelodeon shows.

Streaming The Legend of Korra on Netflix

Odds are you might already have a Netflix subscription for $8.99 per month. With the Basic plan you will also get one simultaneous stream. At $12.99 per month for the Standard you can stream on two more devices and watch in HD. Finally the Premium $15.99 plan allows you to stream in HD on up to four devices at once.

Netflix is one to watch when it comes to the Avatar space. They’re currently in the works on a live adaptation of the series.

Streaming The Legend of Korra on Amazon Prime Video

Amazon Prime Video is Amazon’s own streaming service. You can either opt for a $12.99 per month Prime subscription or an $8.99 video subscription. With Prime, you can stream on three simultaneous devices and have multiple profiles. If the whole family is watching The Legend of Korra Amazon may be the right option. In order to watch The Legend of Korra on Amazon Prime Video, however, you will need to purchase one of Amazon’s add-on streaming services. Choose between Paramount Plus ($5.99/mo) or NickHits ($7.99/mo) in addition to your normal Amazon subscription.

Amazon Prime Video also has the original Avatar available for streaming, as well as other popular and comparable shows like Star Trek.

Viewers can purchase individual episodes of The Legend of Korra on YouTube starting at $1.99 each or buy entire seasons starting at $19.99. Choose between SD or HD. To watch in HD, the price is a bit more expensive with an episode starting at $2.99.

Other ways to stream The Legend of Korra

How to Watch The Legend of Korra

Not sure in which order to watch The Legend of Korra? Or maybe you’re confused by the storyline all together. The good news is The Legend of Korra is not too complicated. We recommend watching the books in chronological order. Here’s a breakdown of the four “books” in the series to make your viewing experience as straightforward as possible.

All you have to know is that The Legend of Korra starts 70 years after Avatar: The Last Airbender ends. In other words, the storyline takes place one generation later than The Last Airbender. While it doesn’t include much of the popular character Aang, it does focus on his family. If you watch Kora you will understand that Aang married a longtime partner in crime, Katara. It could be worthwhile to go back and watch the original Avatar series with some of the new details from The Legend of Korra.

If you couldn’t get enough of The Legend of Korra, there are several series that you may find just as binge-worthy.

This one goes without saying but we couldn’t help but mention it, given Korra is after all its sequel. It follows the story of Aang, who was stuck in an iceberg. The enemy conquered the world while he was gone so the series is about his fight to rebuild the Avatar. Avatar: The Last Airbender works in tandem with Korra to establish the universe.

One of the creators of this series helped write Avatar: The Last Airbender. It follows a group of characters who try to stop a war. Both the character traits and structure of The Dragon Prince is strikingly similar to The Legend of Korra.

She- Ra and The Princess of Power

It’s not a longshot to make connections between The Legend of Korra and She-Ra The Princess of Power. In the show, a magic sword turns an orphan into a warrior. You can see direct links between the characters of She-Ra and Korra.

If you were a fan of The Legend of Korra’s magic and darkness, The Magicians offers similar undertones. It is an American fantasy TV show about a group of students training in magic who all face a threat from a magical world. While it’s not animated, there is plenty of thematic overlap.