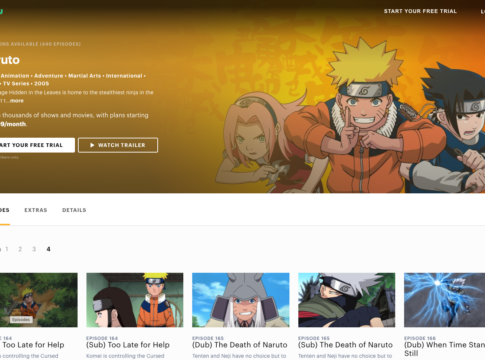 Originally hailing from Japan, Naruto is one of the most widely-recognized anime series in the world. Fans in every corner of the globe have taken to the story of Naruto, a young outcast determined to overcome adversity to become the strongest leader in the village.

The success of the Naruto series led to the release of Naruto: Shippuden, the second part in Naruto’s quest toward becoming the greatest ninja warrior. This coming-of-age story has captivated fans with its strong character development, intriguing storylines, and thrilling fight scenes.

With hundreds of episodes and a handful of movies to enjoy, it may be overwhelming to dive into all that Naruto and Naruto: Shippuden have to offer. Fortunately, we’ve created a comprehensive guide to watching the series, including where to watch Naruto, the best order to watch it, and similar shows that bring the anime action!

Where to Watch Naruto

Our Recommendation: Watch Naruto on Hulu

Subscribers can enjoy an ad-supported version of Hulu for $5.99/month or watch ad-free for $11.99/month. For $64.99/month, Hulu offers live TV featuring 75+ live and on-demand channels.

Amazon Prime members can enjoy Naruto and Naruto: Shippuden by buying individual episodes or seasons of the series.

If you have yet to dive into the world of Naruto, Netflix is a great place to start. Keep in mind that this streaming service only offers Naruto, so you’ll have to watch Naruto: Shippuden on a different platform.

The Basic plan allows you to stream and download content on a single device for $8.99/month. With the $13.99/month Standard plan, you can enjoy HD content and expand your streaming to 2 devices. Upgrade to the Premium plan for $17.99/month to access Ultra HD streams on up to 4 devices.

Other Ways to Stream Naruto

Crunchyroll is a leading streaming service for anime fans without cable, offering the entire catalog of Naruto and Naruto: Shippuden episodes for free with ads.

Funimation gives anime lovers access to over 10,000 episodes of their favorite shows. Naruto and Naruto: Shippuden are available ad-free to Premium subscribers for $5.99/month. To watch offline and stream on up to 5 devices, upgrade to the Premium Plus plan for $7.99/month. The most devout anime fans can enjoy members-only offers and an annual gift with the Premium Plus Ultra plan for $99.99/year.

How to Watch Naruto in Order

With hundreds of hours of Naruto ahead of you to enjoy, it’s easy to feel a bit overwhelmed and unsure of how to tackle the series. If you want to follow Naruto’s journey chronologically, we recommend watching the series and movies in the following order:

7 Shows to Watch if You Love Naruto

If you find that you’re hungry for more mystical storylines and exhilarating fight scenes after exploring the world of Naruto, add the following shows to your “Must Watch” list! Die-hard Naruto fans around the world love the following anime series.

If sci-fi and anime hold a special place in your heart, then Dragonball Z is right up your alley! Much like Naruto, the main character in Dragonball Z uses martial arts to battle his enemies alongside his friends. The catch? Their enemies are alien-like foes with other-worldly powers!

If you thought that the world of Naruto ends with Naruto: Shippuden, think again! Boruto tells the story of Naruto’s adventurous son and his classmates at Hidden Leaf Village Ninja Academy. The series explores Boruto’s journey as he follows in his father’s footsteps in a quest to become a great warrior.

If you like the character arc of Naruto, you’ll enjoy the story of Yusuke Urameshi, too. Both protagonists are seen as outcasts until a life-altering event changes their fate. Join Yusuke as he solves mysteries of the supernatural to help restore order in the world.

If you love the dynamic of young friends mastering their powers, then Soul Eater is the perfect anime series for you. This story includes a group of friends who are learning supernatural skills at school. The crew works together to pass class while destroying evil beings and ghoulish souls.

Like Naruto, Inuyasha features a half-demon protagonist who’s enthralled in a quest to use their demonic powers for good. This series follows a Japanese schoolgirl as she sets out to save the world by collecting the powerful shards of a sacred jewel.

If you enjoyed the most dramatic moments in Naruto, then Fullmetal Alchemist: Brotherhood should be the next series you binge-watch. After performing forbidden alchemy in their childhood, the two brothers navigate the consequences of their actions in a quest to undo the damage they caused.