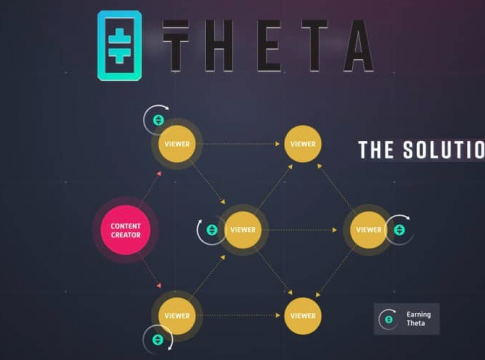 Theta Network looks exciting – and if it takes off, it could even change the way video is distributed and consumed on the web.

Here’s what we know about the Theta Network so far.

Theta Labs wants to let you earn money for being a couch potato.

In an interview with BlockTribune, Theta Labs CEO Mitch Liu revealed that Theta Network users will eventually be able to use their computers to mine Theta Tokens while they watch video streams.

“You’ll essentially mine data tokens, and you earn money during that process. You can also mine, or earn, data tokens while you’re watching the stream itself.” – Theta Labs CEO Mitch Liu

Like Bitcoin and Ethereum, Theta Tokens will be able to be converted into various currencies through exchanges.

The rate at which Theta Network users can earn Theta Tokens will depend on CPU power, reputation score and other factors.

Today’s streaming services rely on centralized servers farms that require massive resources to create and maintain. The Theta Network, however, will instead rely on a torrent-style peer-to-peer system.

In the same BlockTribune interview mentioned above, Liu went on to say that he plans on bringing the Theta Network to YouTube, Twitch and other streaming services.

“It’s an open source project that any partner, including Twitch or YouTube or any of the Chinese video platforms or Sliver.tv, which is in the eSports base, can essentially build a DApp” – Theta Labs CEO Mitch Liu

Currently, businesses that place ads on web videos don’t have much sway over how their ads are displayed. Lack of control presents a big risk for advertisers because video sites are difficult to moderate – especially large video hubs like YouTube.

Several big name advertisers quit YouTube after their ads appeared during videos promoting terrorism and anti-Semitism. A second wave of advertisers left after Felix ‘PewDiePie’ Kjellberg – an influential YouTuber with millions of fans – paid two shirtless teens $5 to hold up ‘Death to all Jews’ signs.

Advertisers and creators are excited about the Theta Network because it cuts out the middleman.

“A decentralized network like Theta has the possibility of cutting out the middlemen — for example, advertisers could use Theta tokens to directly reward content creators and streamers, and potentially viewers for engaging with their content.” – Theta Labs on Medium

Because ad execs will be able to pick and choose the creators they want to work with, there will be less chance that they will accidently monetize bad actors – and wake up the next day with a PR disaster on their hands.

If the Theta Network fixes the adpocalypse, the end result could be more and higher quality content for all.

Last year, global head of Huawei Technologies’ Media Lab Bo Begole wrote that “the internet pipes will burst” because of VR, but VR won’t gum up the works if Theta Network succeeds.

Using advanced compression techniques, Facebook has been able to reduce VR and 360 video file sizes by up to 80 percent. Even when compressed, however, VR feeds still likely place a tremendous strain on video streaming services.

Theta Tokens Won’t Be Available Until 2018

The Theta Network won’t go live until late 2018. However, after the 8th of January Sliver.tv users will be able to purchase and use ERC-20 – a non-standard type of cryptocurrency that’s unique to Sliver.tv and runs on the ethereum blockchain.

After the Theta Network comes out, Sliver.tv will start using Theta Tokens instead of ERC-20. Anyone who still has ERC-20 tokens at that point can exchange them for Theta Tokens.