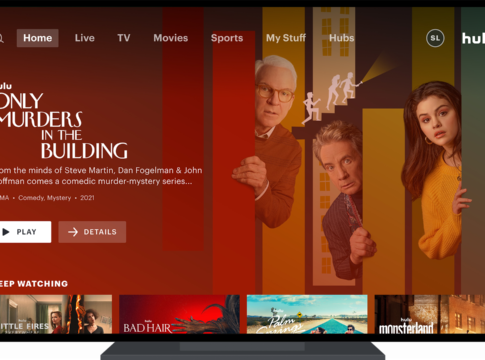 With over 2,500 titles to choose from (including 200+ incredible Hulu Originals, like The Orville, The Bear, and Under the Banner of Heaven), Hulu + Live TV is now a must-have for cord-cutters. Whether you like to watch on-demand TV shows or catch up on weekly live TV and sports, the Hulu Live TV content schedule.

If anyone tries to tell you that teaching is easy, well, they’re flat-out wrong. But that doesn’t mean teaching can’t be a laugh riot. This Emmy-nominated workplace sitcom enters its second season and continues following the dedicated group of teachers, neer-do-well principal, and chaotic but lovable students. These teachers love what they do (most of the time) but as in real life, deal with the day-to-day struggles of being underfunded and vastly outnumbered.

The series airs live on Hulu + Live TV via NBC. You and your family can stream the new season Wednesdays at 9 PM ET / 6 PM PT on up to 2 devices simultaneously, or an unlimited number of devices with Hulu’s Unlimited Devices add-on.

When we say you can watch Reservation Dogs any time on Hulu + Live TV, we mean it. This is a Hulu Original series that pulls absolutely no punches in its dramatic presentation, settings, or emotions. For the uninitiated, Reservation Dogs is drama series focusing on 4 indigenous teenagers from Rural Oklahoma who are willing to commit whatever crime it takes to reach the mysterious and exotic destination of their dreams: California.

The second season of this show ended with a bang on September 28, so feel free to binge-watch the entire first two series right now. And don’t worry — Reservation Dogs was renewed for a third season. Thanks to its low pricing and abundance of shows, you’ll have plenty of content to tide you over between now and when the next season airs only on Hulu.

Watch The Kardashians on Thursdays at 12 a.m. ET

Whether you love them, hate them, or love to hate them, the Kardashians are here to stay. In fact, they’re so here that Hulu even gave them their own show, The Kardashians. Don’t they already have other shows? Yes, yes they do. But this Hulu Original series gives you a deeper, inside all-access pass to one of America’s most well-known fab families.

Join Kris, Kourtney, Kim, Khloé, Kendall, and Kylie as they navigate their billon-dollar businesses with just a touch of drama. Entering its second season, The Kardashians premiered on September 28. You won’t find this or any other Hulu Originals anywhere else. Be sure you do a complete review of Hulu + Live TV and its leading features if you’re a new or returning subscriber. Hulu adds new episodes of The Kardashians every Thursday at 12 a.m. ET.

“Todd” may not be the first name that comes to mind when you think of crime dramas, but So Help Me Todd is proof that there’s more to saving the day than a name. A brand-new series from CBS that premiered on September 29, So Help Me Todd stars Academy Award winner Marcia Gay Harden (Pollock) and Skylar Astin (Pitch Perfect) as a mother-son duo working together (with some difficulty) to solve crimes.

Although this series is a CBS Original, you can stream it live on Hulu + Live TV. Since Hulu + Live TV’s channel list includes entertainment, broadcast, sports, and news networks, you can watch So Help Me Todd alongside the many other TV series available on Hulu both live and on-demand.

The award-winning TV series Big Sky and its vast and beautiful Montana settings are back for a third season. Don’t let the gorgeous settings fool you, however. This series is rated TV-14 for its gritty realism and heavy drama. Crime gets real in the open country of Montana, and you’ll be there for all of the action when you tune in at 10 PM ET / 7 PM PT on Wednesdays.

This series comes to you from ABC and is available to stream live and on-demand through the primary Hulu + Live TV subscription plan. You can also watch this series on-demand or record it to your included 200-hour DVR storage.

If you’re already a fan of ABC’s well-regarded crime drama The Rookie, we’ve got great news: its executive producers decided to expand its universe with an all-new series, The Rookie: Feds. Initially introduced as a two-episode event in season four of the original show, The Rookie: Feds stars Niecy Nash-Betts (Reno 911!) takes the role of Simone Clark, the FBI Academy’s oldest rookie.

Expect this show to get intense fast. The series premiered on September 27. You can watch every new episode live on Hulu + Live TV, or on-demand later thanks to your Hulu on-demand access or DVR.

And don’t forget, since this streaming service provides both live TV and on-demand content, you’ll need to review the Hulu + Live TV channel guide to make sure you know what to record if The Rookie: Feds has a live broadcast that conflicts with your other favorite shows.

Academy Award-winning actress Hilary Swank lends the weight of her skill, talent, and experience to the brand-new drama series, Alaska Daily. Set in the heart of Anchorage, Alaska, this series see Swank take on the role of Eileen Fitzgerald, a journalist seeking a fresh start. But given this is both a drama series and starring someone with Swank’s caliber, you can be sure that her “fresh start” isn’t going to go as planned.

This series premiered on October 6, with episodes airing every Thursday at 10 PM ET / 7 PM PT. Since that’s right after So Help Me Todd, which airs on CBS, you’ll need to do a tad bit of channel switching. Thankfully, Hulu + Live TV has an extremely intuitive interface that makes finding and switching between channels quick, efficient, and maybe even a little fun.

A series like 9-1-1 on its 6th season can only mean one thing: If you’re a fan, this is going to be an excellent Fall 2022. And if you’ve never watched before, you can be sure you’re about to get yourself into something good. The new season of 9-1-1 premiered on September 19 and airs every Monday at 8 PM ET / 5 PM PT on FOX.

Your Hulu + Live TV subscription will give you full access to the live stream as it airs, and access to every episode of every past season on-demand.

This FOX-produced procedural drama series gives you a narrative and intense look into the daily lives of first responders. Word of caution: this series is incredibly intense. Its TV14 rating is due to its high levels of suspense.

Landing squarely in the rare “music drama” genre, Monarch is a series based on a fictionalized “first family of Country music”, the Romans. While this series is not based on real life, it contains all of the larger-than-life personalities and inner-family drama you could ever hope for and expect from a series about Country music stars.

Monarch premiered on September 20 and new episodes stream live on FOX every Tuesday at 9 PM ET / 6 PM CT. Thanks to Tuesdays being an off day for football on FOX, this is the regular and uninterrupted schedule for this series. Your Hulu + Live account gives you live streaming access and on-demand access after the episodes have ended.

There’s little doubt about it. Hulu + Live TV is your top choice for new TV shows and newly-released seasons of your favorite shows. Is our line-up a bit heavy on drama? Sure. But Hulu has much more than that! Be sure to check Hulu’s full Fall 2022 lineup of premieres for more.

Sam Cook is a full-time content strategist by day, a part-time freelance content writer since 2015. In another life, he was a high school English teacher for nearly a decade. Based in sunny New Orleans, he writes long-form educational content on technology, including Insurtech, Fintech, HRtech, and content streaming. He loves whittling down complex ideas within these areas that make decisions easier for buyers. When he’s not reading books with his son Miles and playing video games with the family, you can find him immersed in his growing collection of Euro-style board games.
Sponsored post

All views expressed in this post reflect the lived experience and real perspective of our writers. We thank our partners for sponsoring this post.