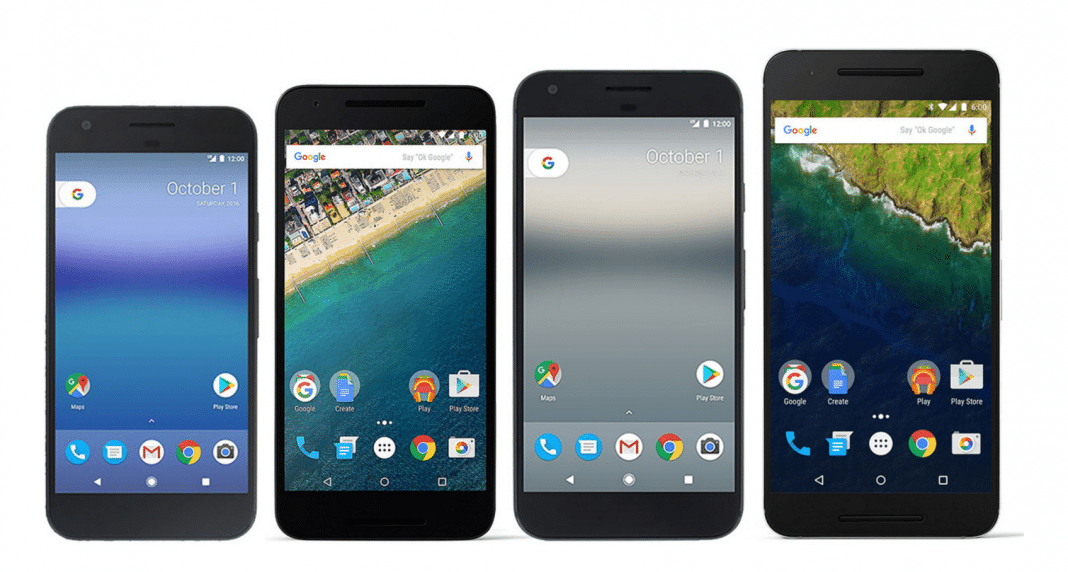 If you want to know how to install a VPN on the Android Pixel, you’ve come to the right place. In this article, we’ll let you know what a VPN is, how it works, and why you need one. Towards the end, we’ll also touch on the Google Pixel family of devices and their broad range of applications.

The Google Pixel is Google’s latest hardware offering. It’s not just one, but a series of devices. There are 2 Pixel phones and a Pixel tablet both running a plain-vanilla version of Android and also a couple of Pixel Chromebook laptops running Chrome OS. Today, we’ll focus mostly on the Android devices. Let’s get started!

If you haven’t yet purchased a VPN, our personal recommendation is IPVanish. It’s fast, secure, and allows you to choose from IP addresses in 60+ different countries. To check out IPVanish, you can click here. It’s also worth noting that purchasing a 12 month subscription will give you two months free.

Installing a VPN on the Pixel

VPNs have a few primary purposes. First, and perhaps most importantly, they encrypt all of your web traffic to ensure that your ISP can’t see what you’re browsing or downloading. Second, they allow you to spoof your location. For users who want to access American Netflix outside the US, or BBC iPlayer outside of the UK – this is for you. This same feature assists in bypassing government censorship in countries like China that block a wide range of websites (including Facebook).

With hundreds of VPNs cluttering the market, it’s important to understand which VPNs will best suit your needs. While a free VPN may seem like the obvious solution, it’s important to note their limitations. Bandwidth caps, built-in ads, data logging policies, and overloaded servers are all common issues with free VPNs. The best VPNs are usually accompanied by a small fee, but definitely worth it from our perspective.

Over the years, we’ve tested numerous VPN providers and applications, both free and commercial. Given its speed, reliability and feature set, IPVanish is the one we tend to prefer and recommend. You can check out our review of IPVanish here.

The easiest way to install the IPVanish VPN client on your Pixel is to do it straight from the device using the Google Play Store app.

The first thing you need to do is start the Play Store app and type in “ipvanish” in the search box at the top of the screen. 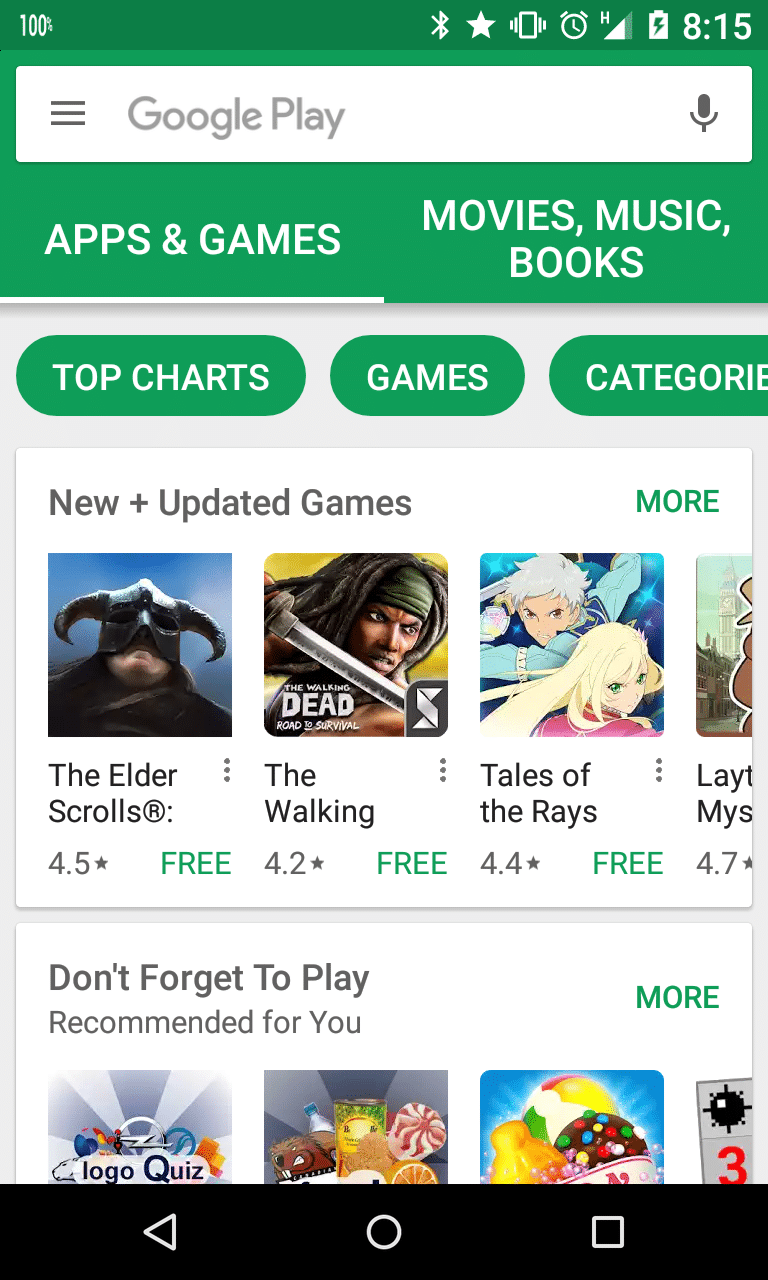 The first selection that shows up should be the right one. Make sure it is called IPVansh VPN and it is from Mudhook Marketing. 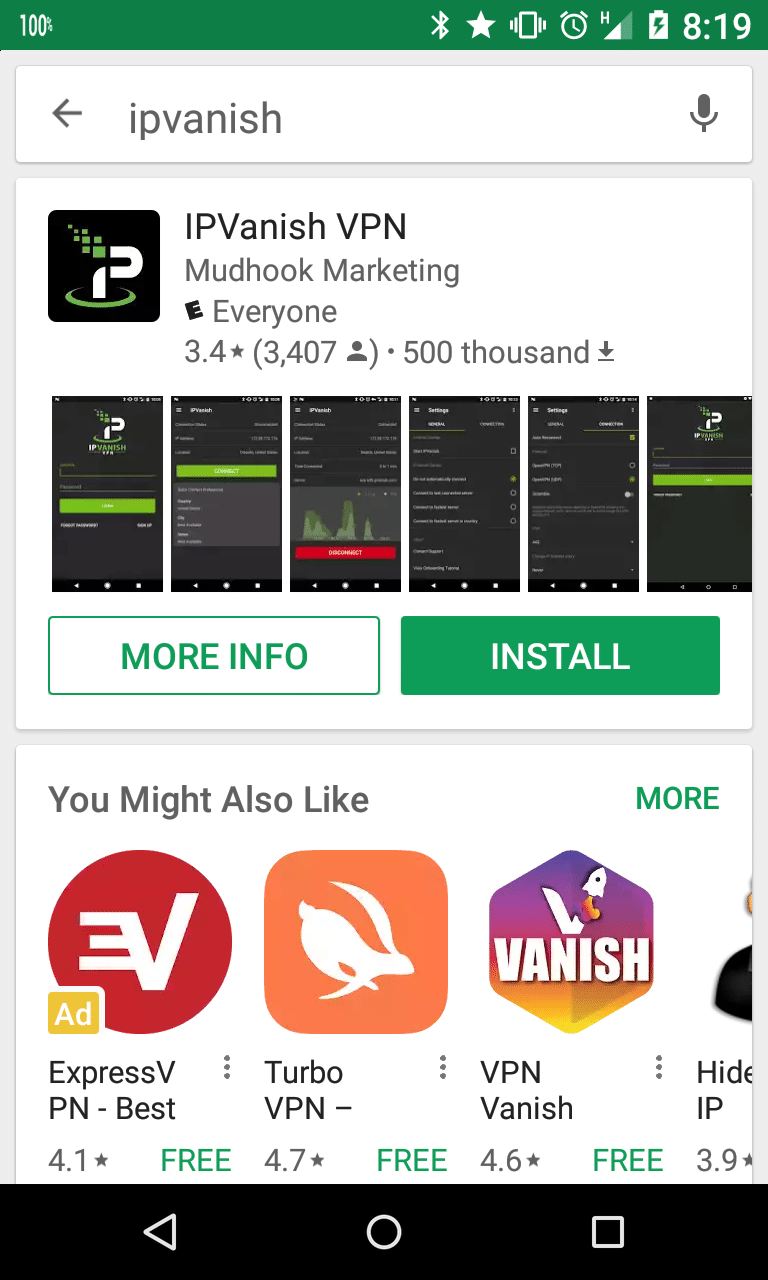 All you have to do is click the Install button. After you accept the access request that pops up, the app will install on your device. 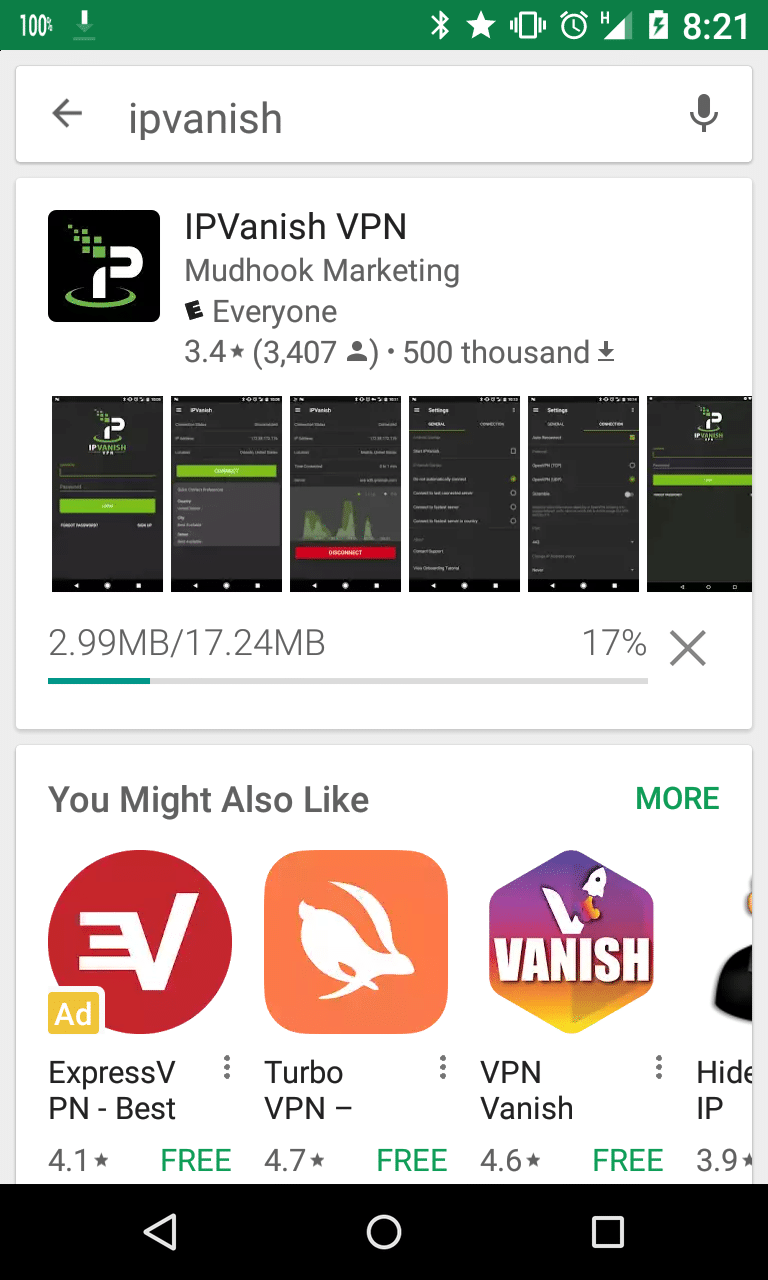 Next, you’ll need to go the IPVanish website and create an account. It’s as simple as clicking Start Now and following a few simple steps.

Within minutes, IPVanish will email you your account information, including the username and password you’ll need to use to connect to the VPN.

Note that you can also create an account directly from the IPVanish app.

For added security, we strongly recommend you change your password before going any further. If you want to be extra thorough, you may want to use a random strong password generator such as this one.

Now, from your Pixel, you need to start the IPVanish app, enter your username and password and tap LOGIN. 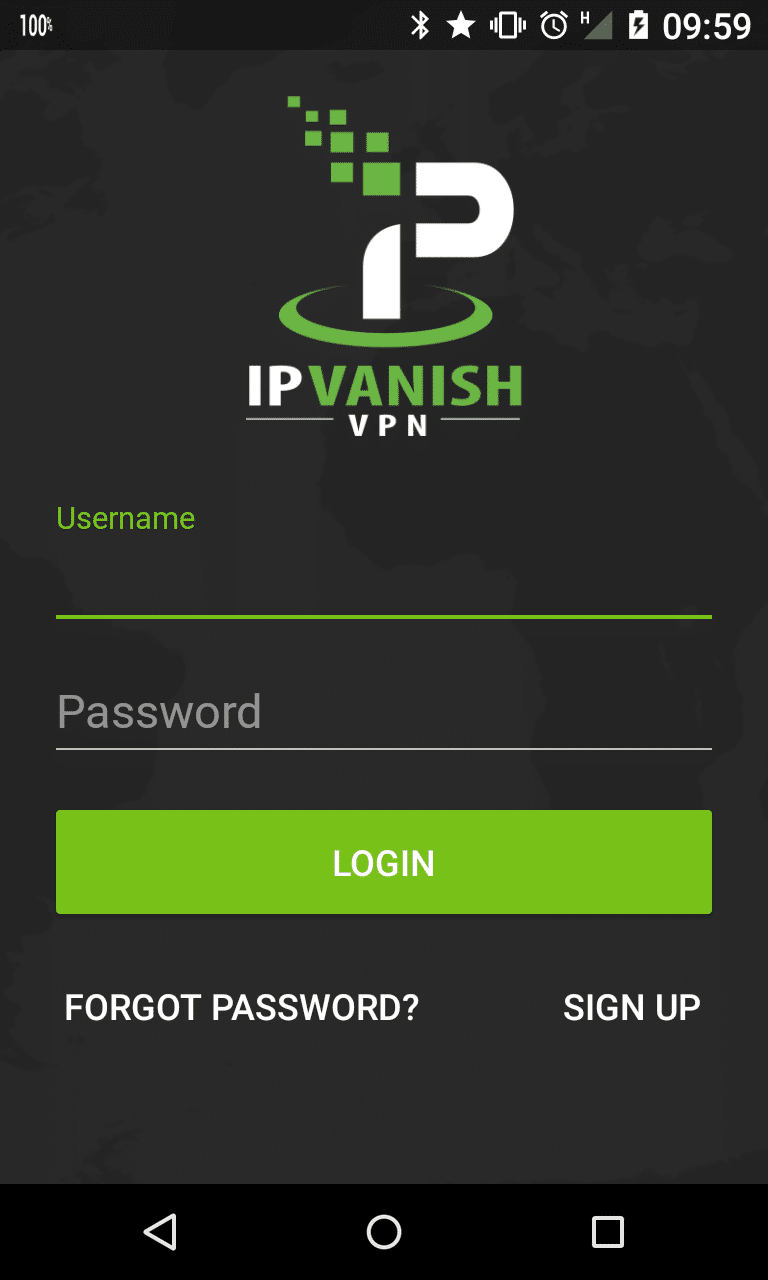 The first time you connect, you’ll be offered the opportunity view the IPVanish tutorial. Tap BEGIN TUTORIAL if you want to read it or tap Skip to go straight to the connection screen. 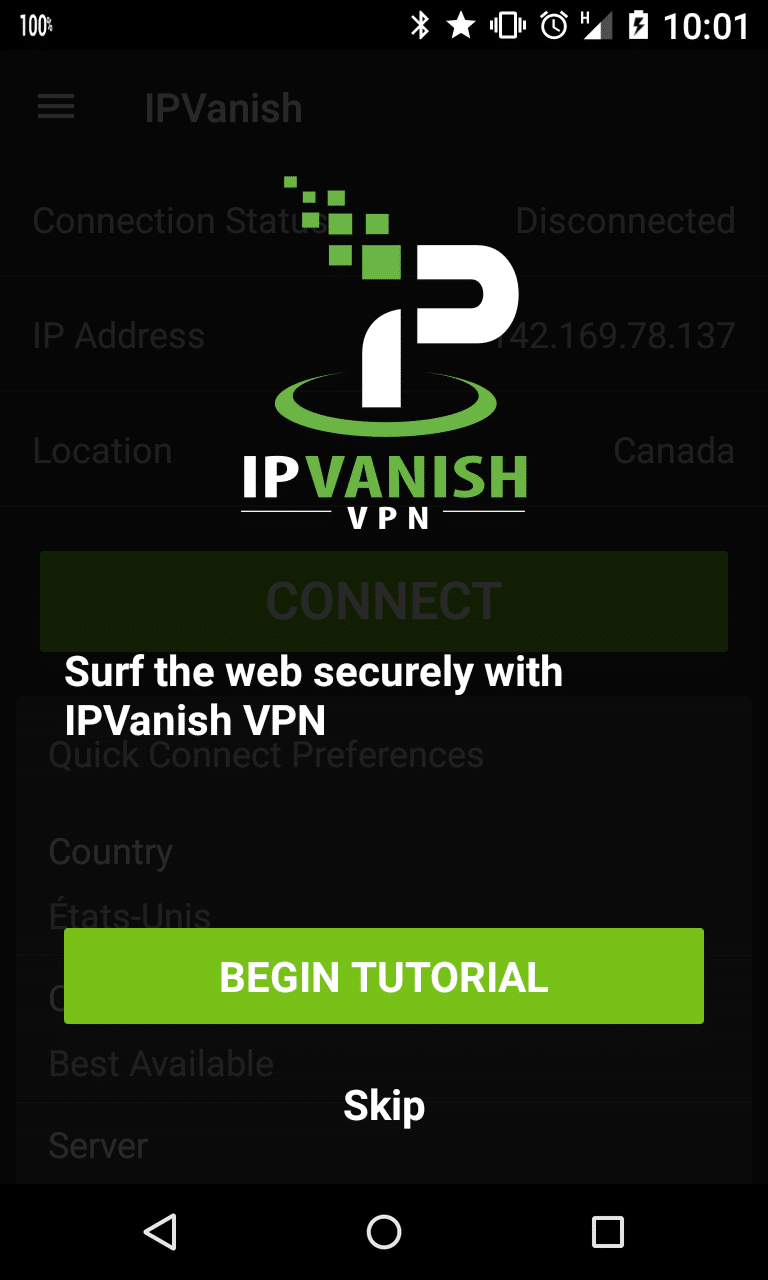 To connect to a VPN, you first need to choose your country. This is not the country where you are located, but the country where the VPN server you’ll connect to is located. Once connected, any site you visit or video source you stream to your device will think you’re located in that country. From the connection screen, tap Country. 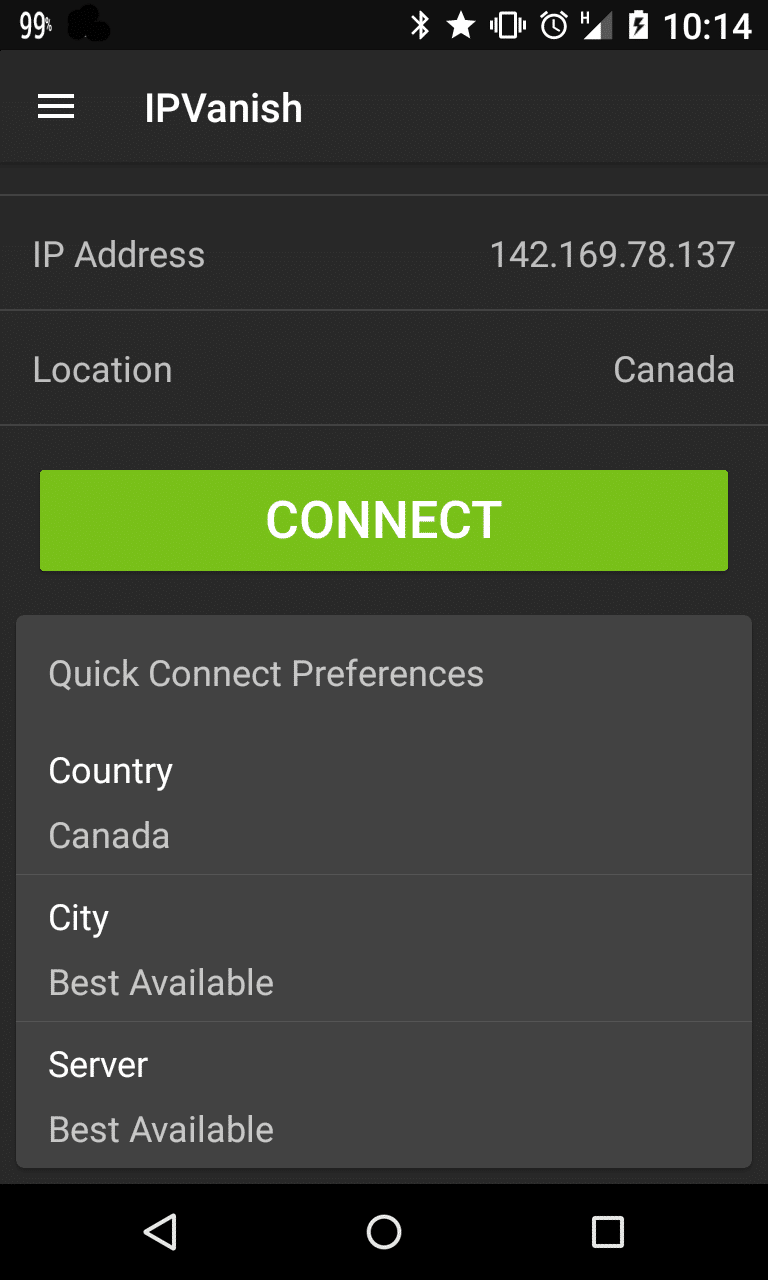 You’ll see a list of countries where IPVanish has servers. Tap the one you want to use. 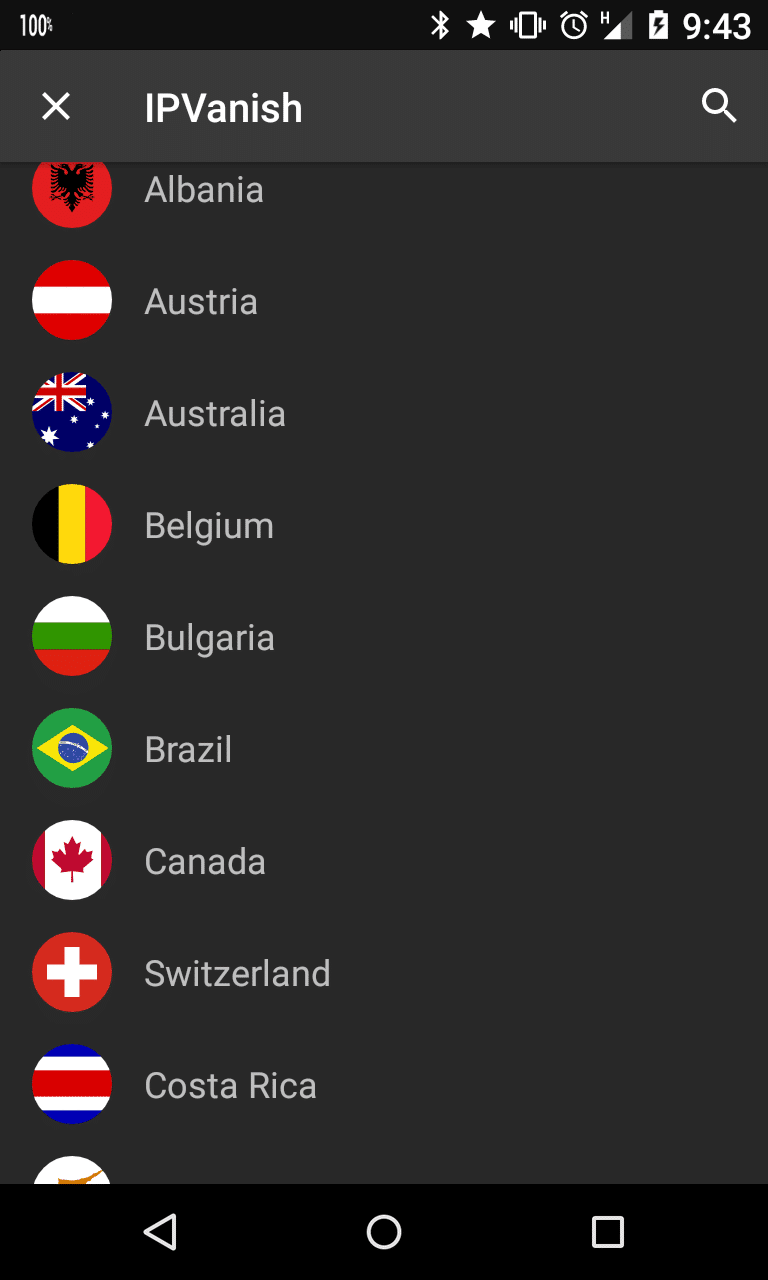 Heading back to the connection screen, you’ll find a set of options that allow you to choose a specific city within the selected country. If it doesn’t matter to you, you can always just let IPVanish connect you to the fastest available server. You can do this by simply tapping the big CONNECT button in the middle of the screen.

If you get a warning message, simply Tap OK to clear it.

That’s it! You are now connected to the VPN, as confirmed by the data usage graph at the bottom of the screen and the icon in the notification area towards the top left. 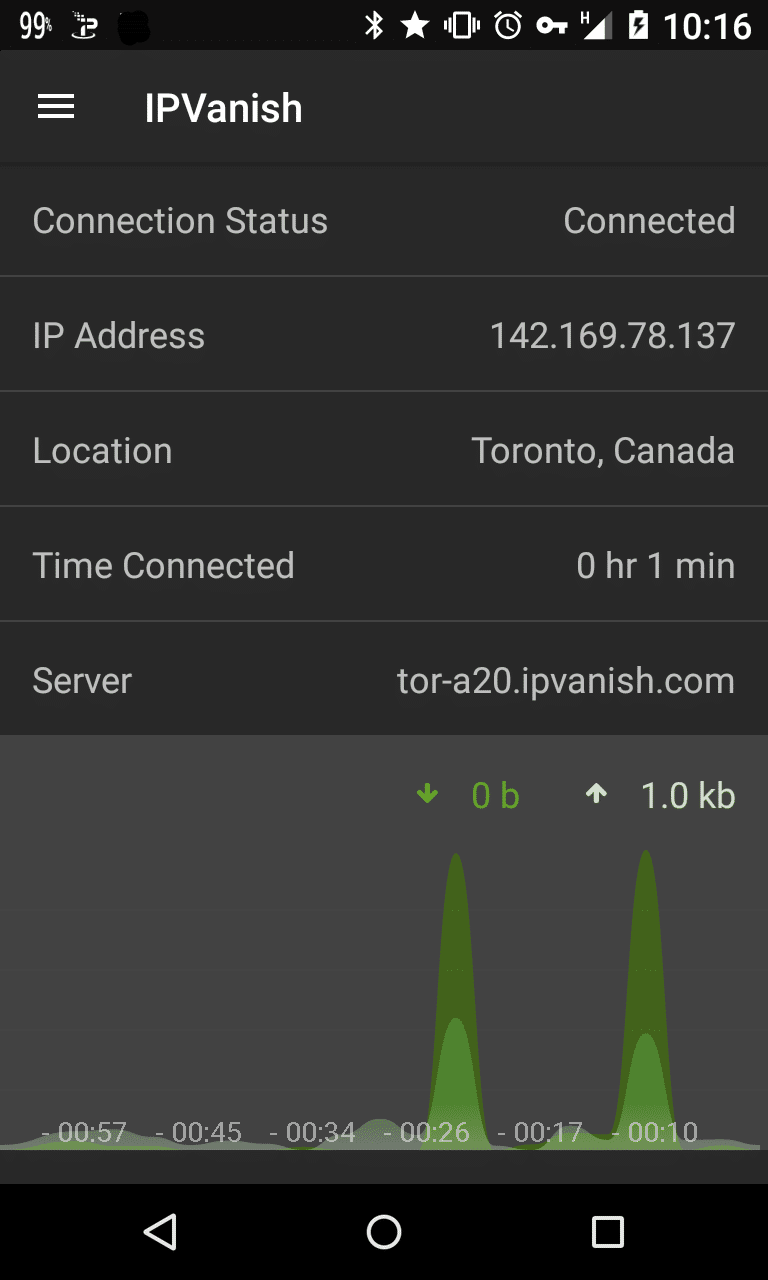 You may now use your device as you would normally do. All network traffic will be routed through the VPN, and no one will be able to see what you’re doing or where you’re really located.

Once you’re done using it, come back to the IPVanish app and simply tap the big red DISCONNECT button at the bottom of the screen to stop using the VPN. 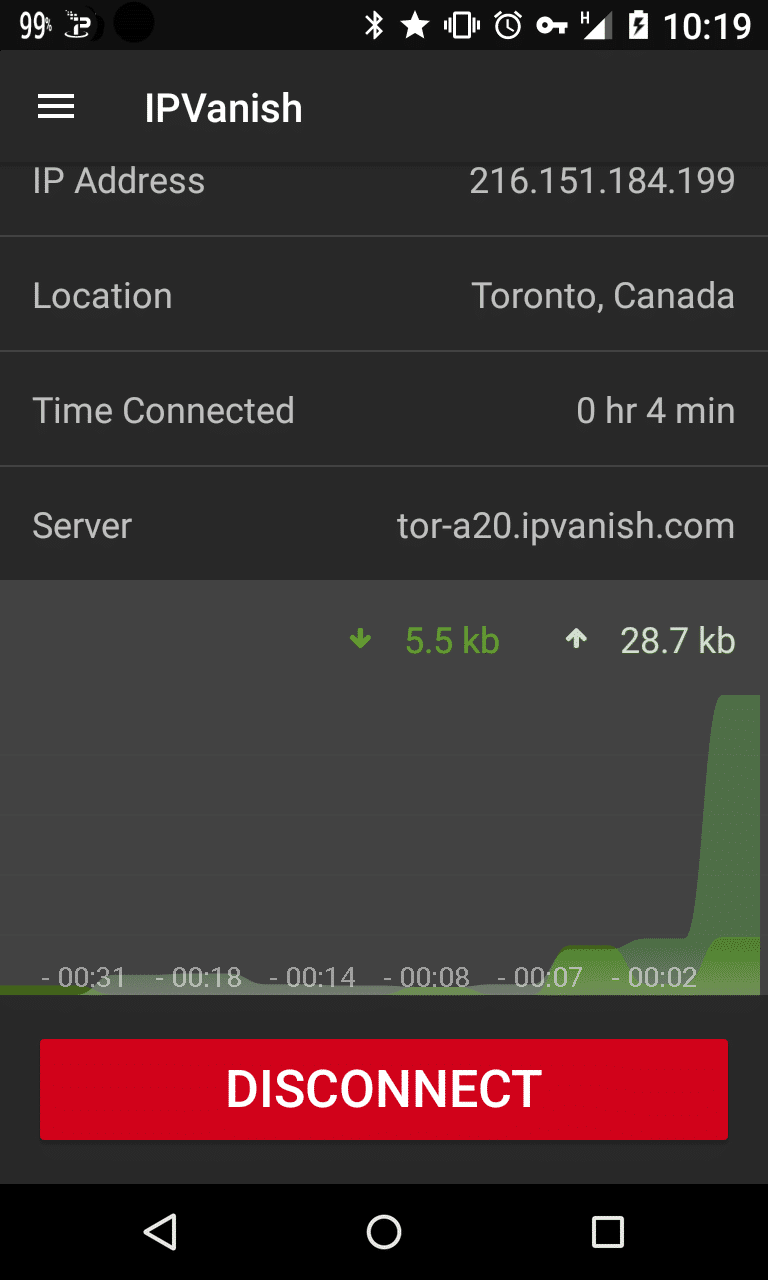 Now that you know how to install a VPN on your Pixel, perhaps you’d like to learn more about VPNs. Without drowning you in technical details, We’ll try to explain in simple terms what they are and how they work, why they’re useful, and why you’d want to use them.

What is a VPN?

The most simplistic way to picture a VPN is as a tunnel. When you connect to a VPN server, you build a tunnel between your device and the VPN server. Now, the cool feature about this tunnel is that it is encrypted. This means that all the data going through it is encoded so that no one can see what it is. No-one can see what’s going on inside.

Why do you need a VPN?

A VPN mainly serves three purposes. First, it hides your activity. With a VPN, no one – not even your internet service provider or wireless carrier – can see you’re doing. This includes anything you connect to, browse, or download. This comes in handy when you want to torrent anonymously, bypass ISP throttling, or otherwise maintain online privacy.

The secondary application of a VPN is having the ability to spoof your virtual location. When you connect to a website through a VPN, it appears as though you’re located in the country you have the VPN set to, as opposed to the actual WiFi hotspot or cellular network you’re connected to.

This allows you to bypass the geographical restrictions that some sites impose. If you want to watch the American Netflix, connect to a VPN server in the US. If it’s accessing BBC iPlayer, connect to a VPN in the UK. And if you’re in an area that imposes restrictions on internet usage, such as China, connecting to a VPN in another country will give you unrestricted access the internet.

The third benefit in using a VPN is the increased security and privacy in general. Although most sites nowadays use secure, encrypted connections (SSL), some still use regular, unencrypted ones.

This means that any data transmitted between your device and the site can be seen by anyone equipped with the right data-sniffing software. Without getting overly paranoid, the person sitting next to you at the library could be spying on your WiFi connection and seeing the username and password you typed in. But if you use a VPN, all data in and out of your device will be encrypted and they will only see meaningless garbage.

The Google pixel is not just one device. It is a line of several devices from Google. There are two phones, one tablet and two laptops in the Pixel family.

The Google Pixel and Pixel XL smartphones are Google’s latest phones, replacing the popular Nexus family of devices. The two models are essentially the same, with the only difference being their screen size and battery capacity. The Pixel has a 5” display and a 2770 mAH battery, while the bigger Pixel XL has a 5.5” screen and 3450 mAH battery. Both are available in silver or black, and you can choose between 32GB or 128 GB of storage space for either device.

Running Android 7 Nougat, the Google Pixel phones stood out for sporting the best camera on any smartphone. At 12.3 MP with a f/2.0 lens, IR laser-assisted autofocus, and additional software optimizations such as HDR+, the camera on these phones is still amongst the best. And to make sure you never run out of storage space for your photos, Google includes unlimited photo storage for life on Google Photos.

Reviewers of the Google Pixel generally praise its performance and its display, while often criticizing that the poor battery life, along with the $600 price tag.

The Pixel family of devices from Google also includes the 10.2 inch Pixel C tablet. It originally ran the Android 6 Marshmallow OS, but Android 7 Nougat is now available. The tablet features a 2560×1800 resolution IPS display panel and is powered by the Nvidia Tegra X1 octa-core chip. It has 3GB of RAM and models are available with either 32 GB or 64 GB of storage.

The Pixel C also has an optional Bluetooth keyboard which is quite ingenious. It can attach magnetically to the tablet via a hinge to use as a “laplet”. The keyboard can also be attached to the back or the front of the tablet for storage. And in that configuration, the keyboard’s battery can be charged inductively from the tablet.

With a street price slightly below $500, reviewers said the device has great performance and versatility, a beautiful screen and good battery life while also criticizing its complicated design, cramped keyboard layout and lack of split screen multitasking.

The Chromebook Pixel is Google’s high-end Chromebook laptop. Like all other Chromebooks, it comes pre-installed with the Chrome OS web browser-based operating system. When it came out, its touch screen had the highest pixel density available on any laptop. It is powered by an Intel Core i5 processor and features 32 GB of solid-state storage. It’s not the prettiest of devices, though, and was described by Wired as “an austere rectangular block of aluminum with subtly rounded edges”.

Another Chromebook Pixel featuring LTE wireless communication and twice the storage capacity is also available at at marginally higher price. At around $1000 the Google Pixel is already an expensive laptop, especially considering its limited OS. Chrome OS is probably not for everyone. Fortunately, Linux or Android can both be installed on the device, but you won’t be able to run Windows on it.

Renaud Larue-Langlois is a freelance writer, blogger, and editor who specializes in technology and electronics. When he's not writing about them, he's playing with them. He can be reached through his website